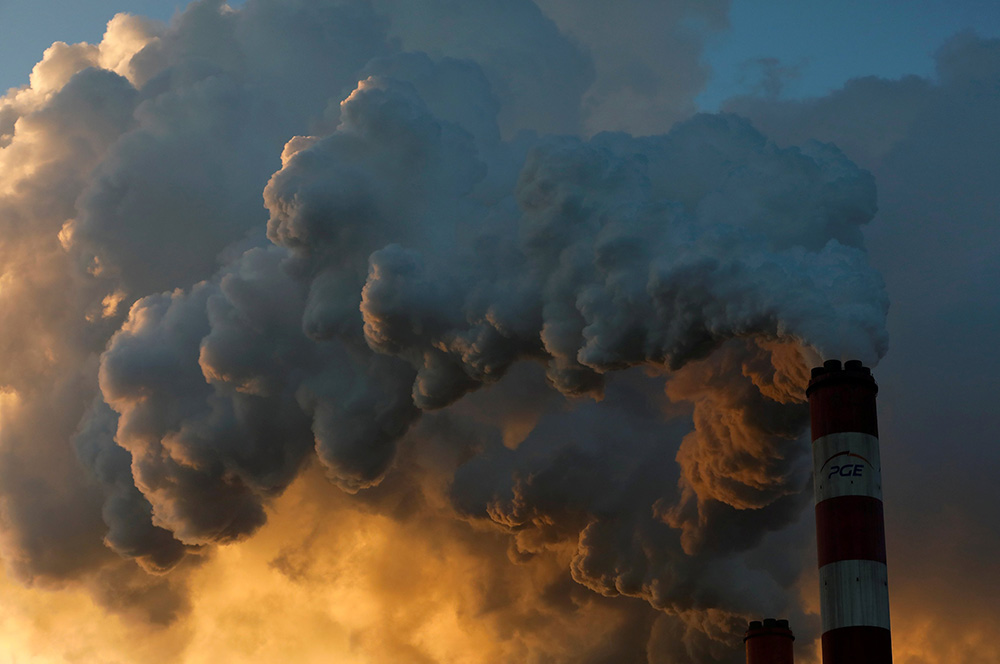 Smoke and steam billow from a coal plant in Belchatow, Poland, in 2018. (CNS/Reuters/Kacper Pempel)

Yesterday, I praised the U.S. Conference of Catholic Bishops' national synthesis of synodal reports, but not everyone is on board the synodal bandwagon. At Crisis magazine, editor-in-chief Eric Sammons complains not only about the content of the report but about the synodal process itself. "The assumption behind this process is that the Church is an institution that shapes itself to the wants and desires of its members," he writes. "The USCCB document highlighted the statement, 'People want the Church to be a home for the wounded and broken, not an institution for the perfect.' This presumes that it matters what the people want. But ultimately, it doesn't." Really? I suppose only God knows what "ultimately" will matter, but the Catholic Church has always consulted the faithful throughout its history. This man needs some ecclesiology and fast.

At Politico, author Jeff Greenfield looks at the expiration of the Child Tax Credit, despite the many beneficial effects it had. We all recall that Sen. Joe Manchin effectively killed extending the credit because he thought it would create a disincentive to work. But why aren't Democrats campaigning on it now? "It seems the battle for Congress is being fought in the nation's middle-class suburbs, and that for Democrats, the votes will be won or lost on the issues of abortion, immigration, crime and the danger of Trumpism," Greenfield writes. "The rescue of millions of children from poverty does not seem likely to resonate in the 2022 battlegrounds. And there may be broader currents at work."

In The Washington Post, columnist Perry Bacon Jr. makes a great case about how we should, and should not, use polling data. The more specific the issue or the tighter the race, the less valuable polling is. Broad, persistent trends, deep dives into smaller slices of the electorate, and gaps between public opinion and legislative results are all good ways to use polls, he argues, and I agree. And using them to predict winners in close elections is swing states is a lousy idea.

No part of Europe loves its coal mines more, and resisted switching to sustainable energy more, than Poland. Now, with Russian oil and gas revenues allowing it to continue funding its war in Ukraine, Poles are "de-Russifying" their energy sources and switching to solar and other green energy sources. Never let a crisis go to waste. Let's hope the U.S. government has the same intuition about the energy grids in Puerto Rico and Florida after hurricane damage! The Post has the story.

Some days I really like The New York Times' Ezra Klein. Other times, the narrowness of his worldview is too much. His podcast with Patrick Collison about "the science of progress," and the way he introduces it, falls into the latter category. He writes:

For hundreds of thousands of years, human history played out without any rapid, marked advance in material living standards. And then, suddenly, in just the past few hundred years, everything changed: Humanity achieved a truly mind-boggling amount of progress in the evolutionary blink of an eye. In the early 21st century, we are all living in the world that progress bequeathed. And yet we understand shockingly little about what drives that progress in the first place.

The lack of sophistication here is shocking, yes? Pope Francis' understanding of the ambivalence of "progress," of its limits, detailed in Laudato Si' and Fratelli Tutti, is a lot more incisive. So was Pope Benedict XVI's in Caritas in Veritate. The next time someone says the church is narrow or out-of-date, remember these words of Klein's.