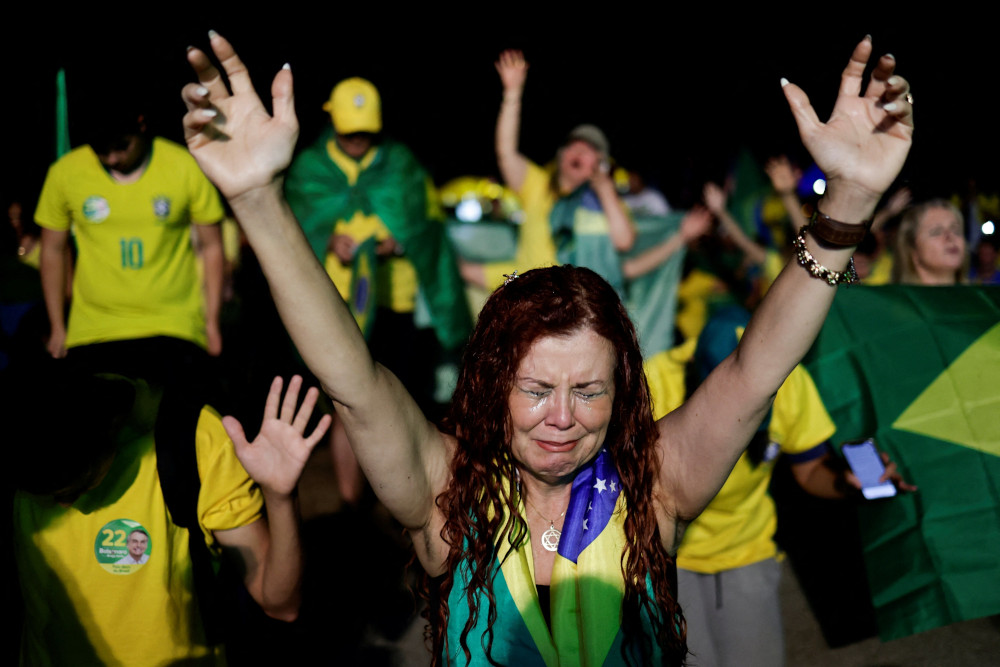 More important than next week's midterms was last weekend's presidential election in Brazil. The fate of the planet, quite literally, was at issue because incumbent President Jair Bolsonaro was determined to allow developers to do what they want with the planet's lungs, the Amazon River rain forest. Before the vote, Bolsonaro also issued some Trumpian signals he might not accept the results. Now, he has indicated he is accepting his loss and Luis Inacio Lula de Silva will be returning to the presidential palace, committed to preserving the Amazon rain forest. The whole world should breathe a sigh of relief.

At New York magazine's Intelligencer blog, Gabriel Debenedetti reports on what former President Barack Obama is doing to help Democrats in this election cycle. Obama's speech in Wisconsin defending Social Security is exactly the kind of message Democrats need, but too often abandon. Unlike those who deny the left's tendency to appear as scolds, a tendency that is turned into a caricature on conservative media, Obama recently reminded Democrats of something they desperately need to hear and apply: "You know, sometimes people just want to not feel as if they are walking on eggshells. And they want some acknowledgement that life is messy and that all of us, at any given moment, can say things the wrong way, make mistakes." Amen.

At The First, the monthly online publication of Catholic Theological Ethics in the World Church, St. John's University theologian Meghan Clark details the project she and other theologians recently undertook "Doing Theology from the Existential Peripheries." The project was coordinated by the Migrants and Refugees Section of the Vatican's Dicastery for Promotion of Integral Human Development. This work is incredibly important and I hope U.S. colleges and universities will sponsor symposia and lectures to highlight it.

At Religion News Service, Jack Jenkins reports on a new Pew Research Center survey that indicates 45% of Americans think the U.S. should be "a Christian nation." Turns out, what people mean by that phrase varies widely, and so that headline is misleading. More than half of that 45% thinks there should never be an official religion in the U.S. and that the government should only advocate for moral values that are widely shared among several religions. More than half also said that if the Bible and U.S. law conflict, the Scripture should have more influence on the making of laws than the will of the people. That is a more problematic proposition to be sure, but one that is also capable of various nuances.

At The Atlantic, Jacob Stern looks at Beto O'Rourke and Stacey Abrams, the Democratic gubernatorial candidates in Texas and Georgia respectively, and tries to explain their superstar status despite the fact that they lost in 2018, and O'Rourke managed to lose a presidential race in 2020, too. Stern calls them "superstar losers" but acknowledges both helped get other Democrats elected in 2018 by leading voter registration drives that were highly effective. The bigger concern for the Democrats as a party is that these superstar candidates draw millions of dollars away from races that might be more winnable, especially from state legislative races which Democrats continue to ignore at their peril.

In The New York Times, John McWhorter sorts through issues of racism and contemporary theater. Last week, I attended a performance of "42nd Street" at the Goodspeed Opera House and was delighted to see such a racially integrated cast. McWhorter reports on the ways a kind of anti-racism on steroids sometimes distorts the issues at stake and risks turning art into propaganda.