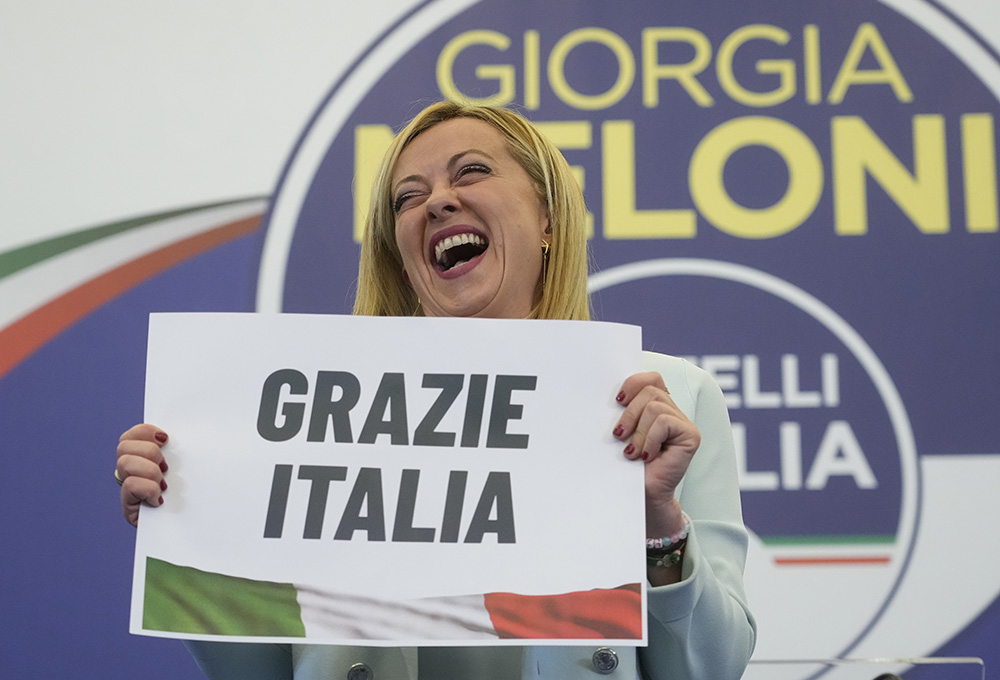 In The New York Times, Rome bureau chief Jason Horowitz analyzes the Italian elections that produced a center-right majority in parliament and the nation's first woman prime minister, Giorgia Meloni. Unfortunately, Meloni ran as the candidate of a party with fascist roots and was still able to garner 26% of the vote, the largest of any party. Much of that support came by her sidelining previous right-wing leaders like Matteo Salvini and Silvio Berlusconi, so the center-right coalition only garnered 44% of the vote nationwide. Policy toward Ukraine will likely be a sore spot within the coalition as Meloni has expressed support for Ukraine, and Salvini and Berlusconi admire Vladimir Putin. The rise of fascist and neofascist parties remains the central threat to Europe's future.

At La Croix, Massimo Faggioli argues that the victory of Meloni and a right-wing coalition that includes neofascist elements could become a major headache for Pope Francis, challenging his approach to migration, one of the pope's signature issues. The headache could extend beyond migration issues. "The recent meeting between Meloni and Cardinal Robert Sarah, one of Francis' most outspoken critics, seems to confirm the plan of Italy's right-wing parties to rely on traditionalist prelates to legitimize their ascent to power," Faggioli writes. And there are plenty of conservative prelates like Sarah in the Vatican who will welcome Meloni's anti-gay stances.

Speaking of those with fascistic tendencies, Pennsylvania GOP gubernatorial candidate Doug Mastriano is the subject of a withering column by George Will in The Washington Post. Will points out that Mastriano has pledged to intervene in the 2024 election if the result is not to his liking. Will is right: There is no more dangerous candidate in America and no more consequential election. In Pennsylvania, the governor appoints the secretary of state, the chief administrative officer for all elections.

Also in the Post, Hannah Knowles and Josh Dawsey report on the growing friction between former President Donald Trump and aspiring president Ron DeSantis. It remains to be seen if Trump's supporters, especially those who had been alienated from politics for years and returned to it only because they liked Trump and his message, will back someone other than Trump. He did not have coattails in 2020 in Georgia's special election to fill two Senate seats. A bitter, protracted fight between DeSantis and Trump would not increase the chances of Trump's supporters lining up behind the Florida governor if he were to prevail in the 2024 primaries.

From National Nurses United, news that the nurses at Ascension Seton Medical Center in Austin, Texas, voted overwhelmingly (72%) to join the National Nurses Organizing Committee/National Nurses United. The hospital center is the largest in Texas to form a union, and its 800 nurses join union nurses in Brownsville, Corpus Christi and El Paso. Congratulations to the workers and, also, to the patients at these hospitals. According to Clayton Sinyai, executive director of the Catholic Labor Network, Ascension Seton Medical Center is the first Catholic hospital in Texas to unionize.

It is not every day that the interior decoration of a bank building catches your eye. But at ArchDaily, the photos of the offices of the National Bank of Australia in Parramatta, a suburb of Sydney, are stunning. Two workspaces are connected by exuberant red staircases, which seem to gallop through the 24-meter space that separates the two buildings. Just splendid.