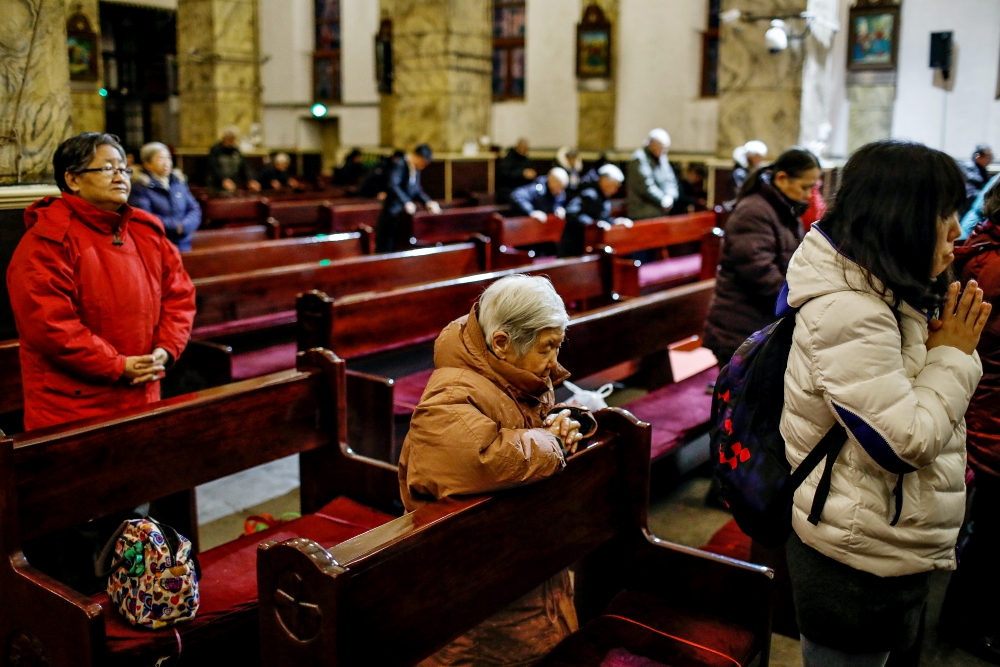 People pray during morning Mass Jan. 30 in the Cathedral of the Immaculate Conception in Beijing. (CNS/EPA/Roman Pilipey)

The bottom line is that Chinese government can do whatever it wants to the Catholic Church in China, and no one can do anything about it. The job of Vatican diplomats, like Cardinal Pietro Parolin, the Vatican secretary of state, is to make the best of a bad situation.

Conservatives who opine from their comfortable offices in the United States demand that the Vatican not talk with oppressive regimes like China, especially about the appointment of Catholic bishops — now under discussion again. But those critics are not responsible for protecting the Christian flock from wolves. They talk with impunity about principles but refuse to recognize that the church has to live in the real world.

I might add that many of these ideologues prophesied that capitalism and foreign investment would bring democracy and human rights to China. Didn't happen. Investors do not care about human rights. They only care about profits.

These same ideologues opposed Pope Paul VI's attempt to negotiate with communist governments in Eastern Europe. They also opposed Vatican negotiations with Cuba and Vietnam. Yet in all these places, the church is better off today than it was in the past. Improvements do not normally come through revolution; often they come through incremental change over time.

The Vatican has hundreds of years of experience negotiating with bad governments. Its principal goal is the survival and welfare of the church. I will not argue that it always gets it right, but those who think it is the job of the Vatican to lead its flock to martyrdom should volunteer to get in the front of the line.

Besides ivory-tower ideologues, there are also expatriates who oppose any compromise or reconciliation with their former countries. These expatriates often had to flee their countries where they had suffered persecution. They offer an important voice for the voiceless in countries like Cuba and Vietnam. Often, they are critical of the Vatican and local Catholic bishops for trying to deal with these governments.

It is difficult to argue with people who bear the scars of persecution, but they cannot be seen as a morally superior voice simply because they argue for a tougher line. They are now safe. Those still in their old countries must find ways to survive, even if this means compromising with the regime.

There are also Catholics in China who have suffered persecution because of their faithfulness to Rome and are now confused and upset by the Vatican's attempt to make peace with the government. These are true martyrs. To think that the Vatican is not sympathetic to these people is absurd. But not everyone is called to be a martyr. If all the Christians had marched into the Coliseum, there would be no Christians today.

The Vatican's job is to make martyrdom unnecessary wherever possible. This is why negotiations are conducted by diplomats, not saints or martyrs.

It is clear that the Chinese authorities fear any group that they cannot control, and this especially applies to religious groups, whose leaders often have more credibility with the people than local officials. China has a history of religious groups leading revolutions. It is especially fearful of religious groups with foreign ties, and that makes the Catholic Church scary to China. After all, it saw what St. John Paul II did in Eastern Europe.

The authorities want religion with "Chinese characteristics," which means a religion with local leaders who support the government.

The critical issue in the negotiations between the Vatican and China has always been the selection of bishops. The Vatican has fought with governments over the selection of bishops for centuries. In ancient time, bishops were elected by the people or priests of a diocese, but local thugs (aka nobles) would sometimes disrupt the elections with threats and violence. This was especially true when the church was wealthy. Sadly, sometimes the right to appoint bishops was granted to kings or nobles in return for favors to the church.

All of that came to a crashing end thanks to Napoleon, who unseated the Catholic monarchs of Europe. Church reformers in the 19th and 20th centuries fought more or less successfully to wrestle the selection of bishops away from secular governments and put it in the hands of the pope, who would be more concerned for the good of the church than kings and politicians. In about a dozen countries, the civil government still has the right of consultation or even presentation for episcopal appointments.

In some cases, the Vatican has to negotiate with such governments until an acceptable candidate is found. Obviously, a priest who advocates for democracy and human rights would not be welcomed by authoritarian governments. They prefer weak leaders who stay in the sacristy. They will allow freedom of worship, but not freedom to preach against corruption and abuse of power or in support of democracy and human rights.

The Vatican could make a fuss with the media, but one diplomat negotiating with Vietnam was warned that the Vatican might get news coverage for 48 hours, but afterward, it would still have to deal with the Vietnamese government.

I have been hearing rumors of a deal between the Vatican and China on and off again for at least 20 years. Usually, nothing happens.

This year, the rumors are more specific, with the Vatican appearing to be willing to accept seven bishops from the Chinese government-sponsored Patriotic Association, of whom two would replace bishops loyal to Rome. One of these loyal bishops is 85, way past the retirement age of 75. The Vatican under Popes John Paul II and Benedict XVI together accepted 45 state-sponsored bishops, so what it is doing today is not that revolutionary.

While some object to accepting these bishops back into the fold, Bishop Joseph Wei Jingyi of Qiqihar told Vatican Insider, "We know that the pope is a father, and the illegitimate bishops are like the prodigal son, they made mistakes and left home. When the son repents, and asks to return to his father, may there be any reason for the father to refuse forgiveness? On the contrary, the father had been waiting a long time for his return."

It is not clear what the Vatican is getting in return, but if it is getting government recognition of bishops from the underground church, that would be huge progress. About 70 bishops have already been recognized by both the Vatican and the government.

For the Vatican, another priority is healing the rift between those Catholics who have been subservient to the government and those who have been loyal to the pope. The longer this split continues, the harder it will be to heal. Most of those who split from Rome did so under pressure or out of expediency. Pope Francis speaks of the church as a field hospital, and few need this hospital more than the Catholics of China, who sorely need healing and reconciliation.

It would be great if the Catholic Church in China could be a voice for democracy and human rights, but while that might be the prophetic vocation of a few, like Hong Kong Cardinal Joseph Zen Ze-kiun, it is unrealistic to think that the institutional church could be that voice today.

Wei, who was secretly ordained bishop in 1995, told Vatican Insider that no matter how relations between China and the Vatican end, he will follow the pope.

To those attacking the Vatican initiative he said, "I wholeheartedly beg our friends outside of mainland China, including those from Hong Kong, Macao, Taiwan and all the other continents, please not to speak on our behalf, do not insist on speaking in our place, do not speak on behalf of the clandestine church. I ask you for it is not you who can represent the underground church in China."

"In the present situation in the People's Republic of China," he argues, "no one can claim they represent the underground church."

At the same time, he acknowledges that "the situation around us is not optimal, far from it, and that worries so many people. But even now our help comes from the Lord."

Whatever the deal the Vatican is able to make, only time will tell whether it leads to improvement for the life of the church. Critics should back off and let the diplomats do their work. If they fail, China will continue to be a church of martyrs. If they succeed, things could become incrementally better over time. Let's hope and pray that the Vatican diplomats can make the best of a bad situation.