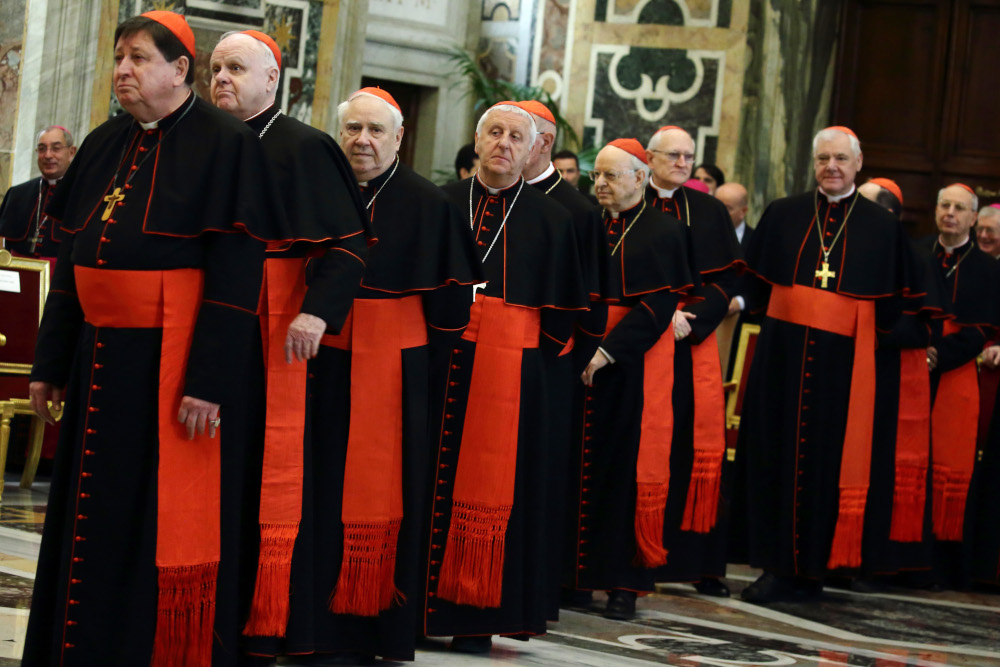 Cardinals wait in line to meet Pope Francis during his annual pre-Christmas meeting with top officials of the Roman Curia at the Vatican in this Dec. 21, 2017, file photo. (CNS/Evandro Inetti)

After six years as pope, Francis continues to remake the College of Cardinals in his own image, increasing the likelihood that his successor will continue on the same path as his papacy.

Ten new cardinal electors were announced on Sept. 1 and will be "created" at a consistory on Oct. 5.

With the appointments, the college will grow to 128 cardinal electors, although within 10 days the number will drop to 124 as four cardinals turn 80, the age at which they can no longer vote in a papal conclave.

After Oct. 15, 53% of the cardinal electors will have been appointed by Francis. Though there are no guarantees how the cardinals will vote, the odds are that his legacy will be felt deeply under the next papacy.

In his selections, Francis has ignored many of the cardinalatial sees, such as Milan, Venice and Philadelphia, from which cardinals have traditionally been selected, because their current archbishops, such as Philadelphia's Charles Chaput, are not in tune with Francis' style or policies. Instead he has chosen men who are in sync with him, like Joseph Tobin of Newark, N.J., who was made a cardinal in 2016 while serving as archbishop of Indianapolis.

This time, for example, Francis elevated the archbishop of Rabat, Morocco, which has never had a cardinal, and even promoted a simple bishop from the Diocese of Huehuetenango, Guatemala.

From the Roman Curia, Francis selected Jesuit priest Michael Czerny, a midlevel official who frequently meets with the pope on immigration issues.

The statutes for the Dicastery for Promoting Integral Human Development, in which Czerny's section is housed, has a special clause indicating that the section will operate under the direction of the pope, "who will oversee it in the manner he deems appropriate." In other words, although the section is in the dicastery headed by Cardinal Peter Turkson, Czerny has always reported directly to Francis.

At Francis' election in 2013, 35% of the cardinals were members of the Curia, as the Vatican's governing bureaucracy is called. With these appointments, Francis has significantly reduced the Curia's voice in the college: After Oct. 15, the Curia's presence will be down to 26%.

He has also reduced the number of Italian cardinals. At his election, 24% of the electors were Italian; after Oct. 15, the percentage will be down to 18%. The percentage of cardinal electors from Europe has also dropped to 42% from 52%.

The United States has also lost votes under Francis, down to 7% from almost 10% under Benedict XVI.

In short, the next conclave will be less European and less white. While the Global South (Asia, Africa, Latin America and Oceania) made up 35% of the college at his election, it will now be 44%. This is Francis giving greater attention to the peripheries in the church.

Even so, with 42% of the electors, Europe, home to only 26% of the world's Catholics, is still overrepresented. The church changes, but it does so slowly.

Three additional men are also being appointed cardinals, but because they are already over the age of 80 they will not be able to vote in the next conclave.

Most notable is retired Archbishop Michael Fitzgerald, who was appointed nuncio (ambassador) to Egypt by Benedict. Fitzgerald had been head of the Vatican office on interreligious affairs until Benedict exiled him to Egypt because he did not like his views on interreligious dialogue. This papal honor will please those who thought Fitzgerald got a raw deal and should have been made a cardinal earlier.

The announcement of new cardinals caught most people by surprise, but clearly Francis wanted to have them in place before the Synod of Bishops on the Amazon, which begins the day after the consistory where the cardinals will be "created."

The church's use of the word "create" in reference to naming cardinals has led to the clerical joke that only God and the pope can create something out of nothing. Cardinals are not "ordained" since the cardinalate is not a sacrament but simply an office in the church. Czerny will be ordained a bishop prior to the consistory since it is customary that all cardinal electors are archbishops.

The average age of all the cardinals is 72. The average of the new appointees is 66, which means they will be around for a while.

Only four cardinals will turn 80 in 2020, so unless there is a sudden dying off of cardinals, Francis will not have another chance to appoint new cardinals until at least 2021. The number of cardinal electors is not supposed to exceed 120, but the pope can go over the limit as John Paul did in 2003 when the number went to 135.

Besides electing popes, members of the College of Cardinals advise the pope on governance of the universal church. One of them will also undoubtedly become the next pope, since the college usually chooses one of its own.

While Francis' health appears to be good for a man of his age, eventually, like all of us, he will die.

The men Francis has appointed cardinals will be decisive in choosing his successor.