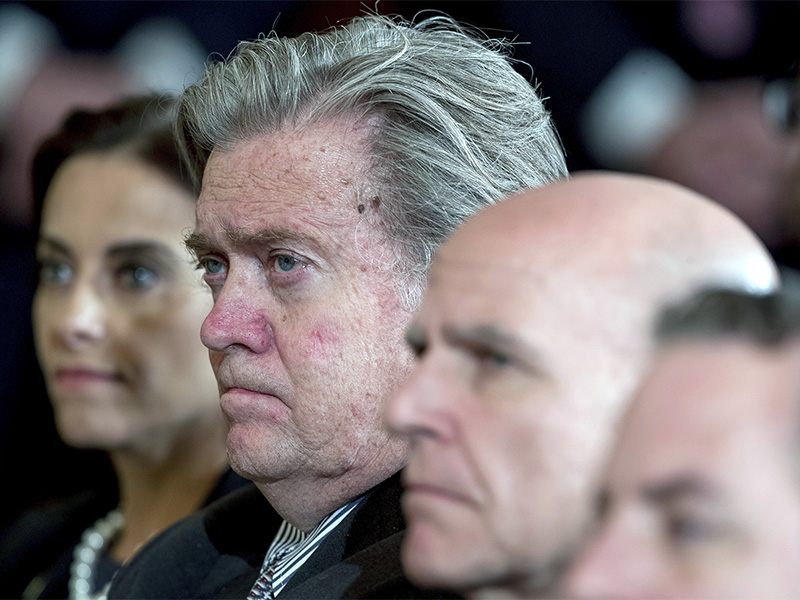 The religious left may be happy now that Steve Bannon is gone from the White House, but they may want to think again. True, he was the political strategist that helped Trump gain the White House by attacking immigration, affirmative action, and government spending for the poor. And Bannon described the news outlet that he now runs again, Breitbart News, as a medium for the alt-right.

But what the religious left forgets is that on some issues, Bannon and they are in agreement and now his voice has been silenced in the White House. His ouster may have been a victory for a more inclusive America, but in the internal politics of the Republican Party it also signals the triumph of the corporate and interventionist wings of the party, which should scare the religious left. And in another sign of the end of the Bannon era, his ally Sebastian Gorka, a deputy assistant to the president, has been forced out, news reports said.

It is ironic that religious left looks to military generals and a former executive of big oil (Secretary of State Rex Tillerson) to be the adults in the Trump Administration. But it was Bannon who argued against U.S. involvement in Afghanistan and the Middle East. In this he was in tune with religious peace activists.

It was Bannon who argued that globalization and trade agreements hurt American workers. It was Bannon who was most critical of the Wall Street establishment. In this he was in tune with the religious left, which has always been very close the American labor movement.

On trade and corporate America, Bannon sang the same song as Sen. Bernie Sanders (D-Vermont), the favorite candidate of the religious left.

Long before the presidential campaign, Bannon laid out his views in a presentation at the Vatican in the summer of 2014. His talk was a strong defense of capitalism as a creator of wealth and the middle class. But after the fall of the Soviet Union, according to Bannon, capitalism lost its spiritual and moral foundations in Judeo-Christian beliefs. He criticized state-sponsored, crony capitalism as practiced in China and Russia as well as the Ayn Rand or the Objectivist School of libertarian capitalism.

Singling out libertarian capitalism was especially significant since Ayn Rand is the patron saint of Republicans like House Speaker Paul Ryan (R-Wisconsin) who believe that a deregulated marketplace can solve all problems. On the other hand, Ayn Rand is a favorite target of the religious left, especially the proponents of Catholic social teaching. She epitomizes the amoral, selfish capitalism they hate.

During the discussion after his presentation at the Vatican, Bannon criticized Wall Street for looking on everything “as a securitization opportunity. People are looked at as commodities. I don’t believe that our forefathers had that same belief.”

He blamed the greed of investment banks for the 2008 financial crash. He thought the bailouts were wrong. He complained that “not one criminal charge has ever been brought to any bank executive associated with 2008 crisis.” Instead, they got bonuses.

This sounds like the language of the religious left who embraced the occupy Wall Street movement.

Bannon always saw himself as the leader of “a center-right populist movement of the middle class, the working men and women in the world who are just tired of being dictated to by what we call the party of Davos,” whom he described as the international elite who try “to dictate to everybody how the world's going to be run.”

Crony capitalism is Bannon’s enemy, where “you have a different set of rules for the people that make the rules. It’s this partnership of big government and corporatists.” The same kind of criticism can be heard from Catholic bishops in developing countries where corruption protects the rich as they exploit the poor and destroy the environment.

In the United States, Bannon said the “biggest fight is with the Republican establishment, which is really a collection of crony capitalists that feel that they have a different set of rules of how they’re going to comport themselves and how they’re going to run things. And, quite frankly, it’s the reason that the United States’ financial situation is so dire ....” These words could have been taken out of a religious left manifesto.

Bannon wants a capitalism reoriented by Christian values. “What is the purpose of whatever I’m doing with this wealth?” he asked. “What is the purpose of what I’m doing with the ability that God has given us, that divine providence has given us to actually be a creator of jobs and a creator of wealth? I think it really behooves all of us to really take a hard look and make sure that we are reinvesting that back into positive things.” 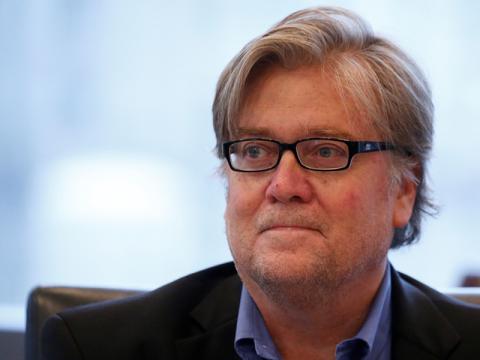 CEO of Republican presidential nominee Donald Trump campaign Stephen Bannon is pictured during a meeting at Trump Tower in the Manhattan borough of New York, on August 20, 2016. (Photo courtesy of Reuters/Carlo Allegri/File Photo)

But sadly, Bannon never answers these questions because his hatred of government will not allow it to have any role in regulating business. For him, government regulations lead to crony capitalism, whereas for the proponents of Catholic Social teaching, regulations should protect the common good from unbridled capitalism. They even see a role for government in the redistribution of wealth.

The religious left and Bannon also disagree in that he is only concerned about the impact of free trade and globalization on American workers. The religious left, on the other hand, also argues for poor people abroad who through low wages are being exploited by multinational corporations. They are also concerned about peasant farmers who are being put out of business by cheap, government-subsidized agricultural products from American farmers. Bannon is an American nationalist who does not recognize the foreigner as the neighbor in the Good Samaritan parable.

So, who won with Bannon’s ouster? In many ways, the religious left can be happy he's gone. But they should also worry that with his exit the corporate establishment and military interventionists now have little opposition in the White House.