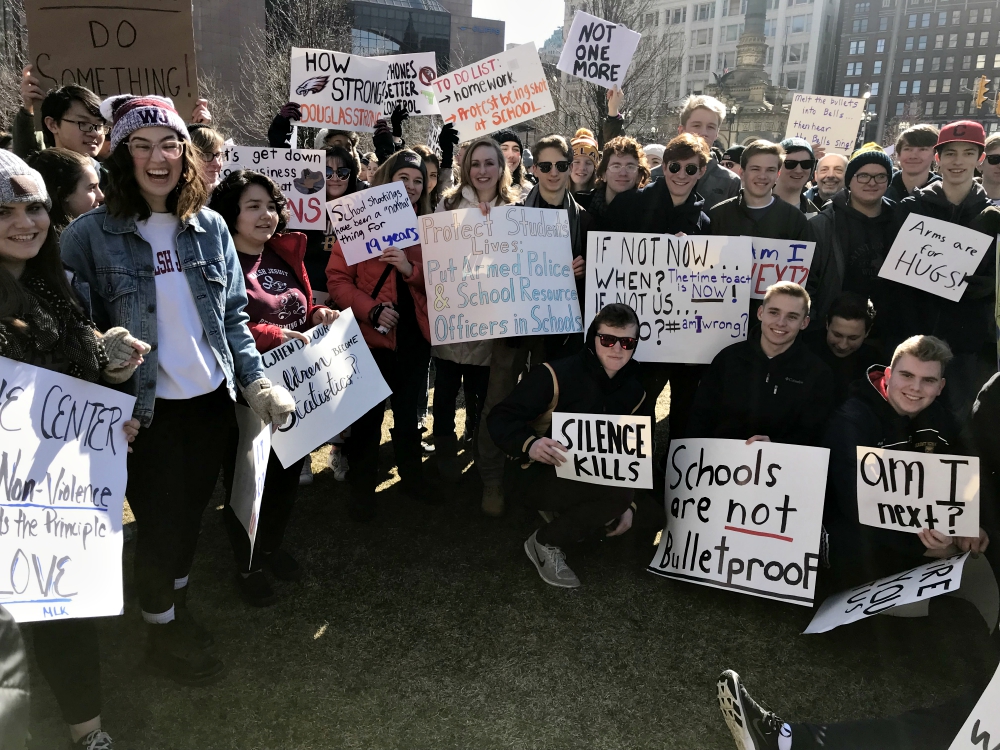 More than a hundred students and faculty from Northeast Ohio Catholic high schools attended the March for Our Lives in Cleveland Public Square on March 24. (Christine Schenk)

At 8:15 a.m., I boarded a bus with a contingent of young women from St. Joseph Academy, along with principal Jeff Sutliff and school librarian Rebecca Synk.

On the way downtown, I asked the students why they were marching that day. Almost to a person, they replied that they wanted to protest "senseless acts of violence against children" and that they "didn't want to be afraid to come to school."

St. Ignatius High School, which is within walking distance of Public Square, served as a staging area. Catholic marchers gathered there to make signs and pray together before walking to the rally site. The prayer service featured powerful reflections prepared by St. Ignatius faculty and students.

Samantha Burke from St. Joseph Academy raised "prayers and hope for the Parkland [Florida] families and friends who have experienced loss or injury, and that they would feel [God's] support and presence."

A St. Ignatius faculty member wept as he asked the students for forgiveness for his generation. Lamenting that since Sandy Hook in 2012, more children have been killed by gun violence than soldiers killed in combat since September 11, 2001, Alan Wilhelms said, "My hope is that my grandchild will forgive my generation for permitting gun violence to permeate our society and congratulate your generation for finally, finally resolving this murderous problem by your action, your fortitude and your vote."

Senior student Joseph Ezersky sadly told about classmates assigned to create a photo essay about their response to gun violence: "For every poster I saw affirming restrictive gun regulations, I saw one comparing American gun control with gun control in Nazi Germany or in Stalin's Soviet Union."

While every citizen has the right to bear arms, Erzesky said, each also has the right to live lives free of the fear of gun violence, so that "when these two rights conflict, our morality and our faith tells us that we must defend the dignity of life over all other things."

At the rally itself, marchers heard from political figures as well as movement activists. Cleveland Mayor Frank Jackson congratulated the students, urging them to "stay strong, focused and committed."

Cuyahoga County Executive Armond Budish compared the event to demonstrations against the Vietnam War, saying, "I want the politicians in Washington to hear this. These aren't paid actors; they're our kids."

Grace Yo of public Mayfield High School evoked rueful laughter and applause when she observed, "My school dress code is stricter than gun laws." 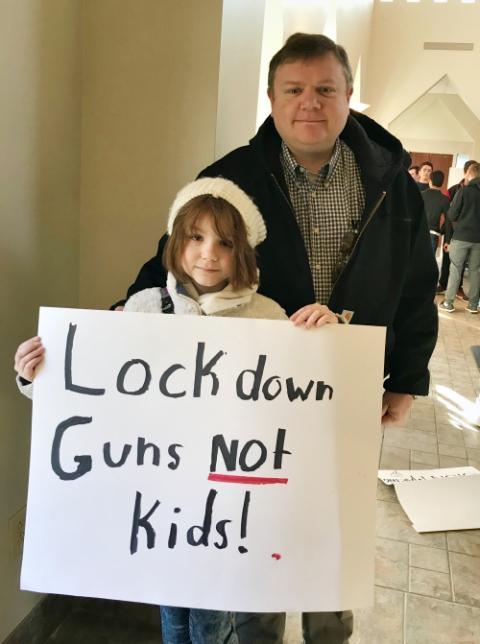 The principal of St. Joseph Academy, Jeff Sutliff, and his daughter prepare to join the March for Our Lives in Cleveland March 24. (Christine Schenk)

After the rally, Claire Forrestal, who is a student leader from St. Joseph Academy, said she found it "really powerful to see this be a student-led movement. So, we're here not only to support the people that are leading this movement from Parkland, but also just for each other because it's important that we all have safe schools, safe environments."

Sutliff, who brought his 9-year-old daughter to her first march, was "very proud of our students for standing up for life and working to make positive change in the world — 'that all may be one.' "

St. Joseph Academy is a sponsored ministry of the Congregation of the Sisters of St. Joseph and the phrase "That all may be one" (John 17:21) is central to the congregation's charism of unity and reconciliation.

Synk also expressed pride in the students and all the young people at the march. "They just are so inspiring and gives me hope for the future."

At the end of the day, Ezersky's prayer reflection perhaps best expresses the sentiments of marching students: