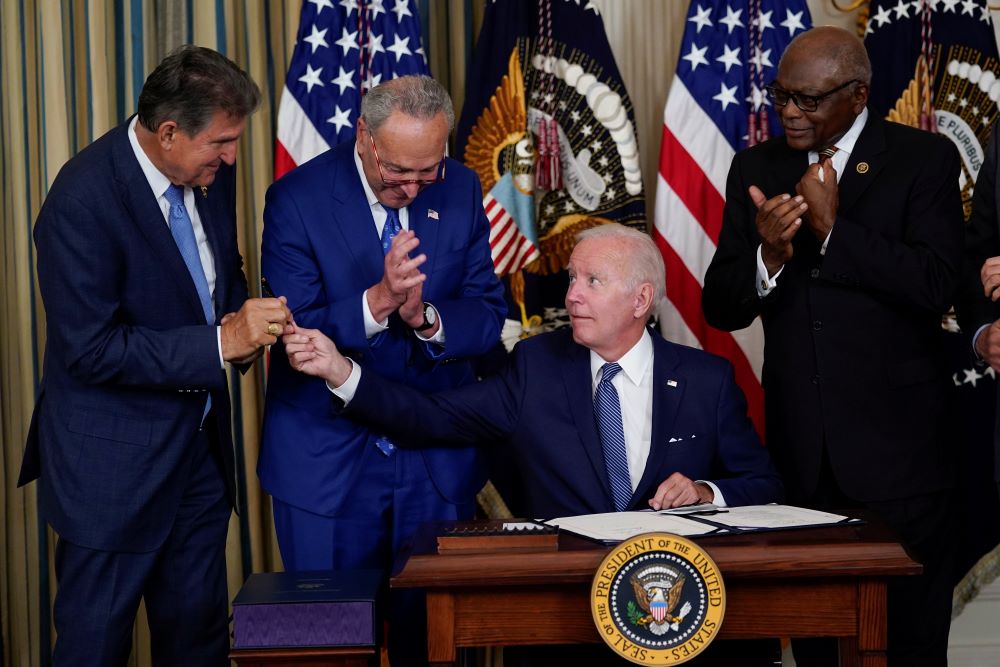 With the stroke of his pen, President Joe Biden signed into law Aug. 16 the largest-ever federal action in response to climate change, pumping hundreds of billions of dollars over the next decade into transitioning the nation to clean energy and reducing greenhouse gas emissions that are rapidly heating the planet.

The more than $300 billion in climate provisions included in the Inflation Reduction Act, or IRA, represent a major milestone after decades of mostly failed efforts by the United States, the world's largest historical source of heat-trapping emissions, to match its response to climate change with the serious threats it poses for the country and the globe.

Faith groups who have worked for years lobbying for significant federal climate legislation celebrated the historic achievement. At the same time, they vowed to take on its shortfalls, specifically continued investments in and potential fast-tracking of new fossil fuel production that have long exposed communities of color to greater levels of pollution.

"Finally! This landmark bill comes none too soon," Susan Gunn, director of the Maryknoll Office for Global Concerns, said in a statement, referring to the heatwaves, wildfires and flooding this summer across the country and much of the world.

"The cry of the earth, which Pope Francis calls us to heed in his Laudato Si’ encyclical, finally was heard in the halls of Congress. This legislation is a strong start for the United States to do its fair share to care for our common home," she said.

In a statement after the Aug. 12 House vote sent the bill to Biden's desk, Catholic Climate Covenant executive director José Aguto praised the bill as providing "authentic hope for future generations, bringing our nation and world closer to emissions reduction goals, closer to each other, and closer to a better world." 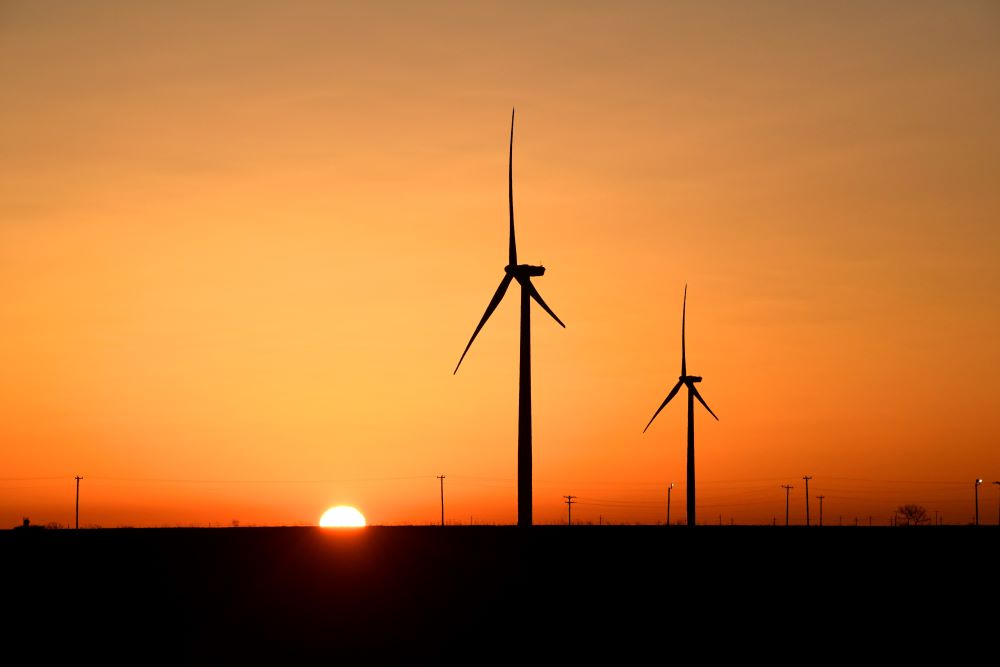 Catholic fingerprints were all over the Inflation Reduction Act and its massive climate investments.

It was Biden, the nation's second Catholic president, who signed it into law. After doing so, he gifted the pen to Catholic Sen. Joe Manchin of West Virginia. It was Manchin, the focus of intense scrutiny for his ties to the coal industry, who for months wielded his position as a critical swing vote to scale back and hold up the legislation before striking a surprise deal July 27 with Senate Majority Leader Chuck Schumer to bring the bill back to life, with an apparent assist from Bill Gates.

And it was House Speaker Nancy Pelosi, the Catholic from California, who gaveled the legislation secured in Congress. Before she did, she quoted the pope on the significance of the bill's climate provisions, saying they represent "values espoused by Pope Francis when he said earlier this summer 'Our planet has reached a breaking point' in the fight against climate crisis.' "

At the signing ceremony, held in the State Dining Room of the White House, Biden called the Inflation Reduction Act "one of the most significant laws in our history" and a victory for the American people over special interests, not just today but for generations to come.

"The Inflation Reduction Act invests $369 billion to take the most aggressive action ever — ever, ever, ever — in confronting the climate crisis and strengthening our economic [and] our energy security," the president said. 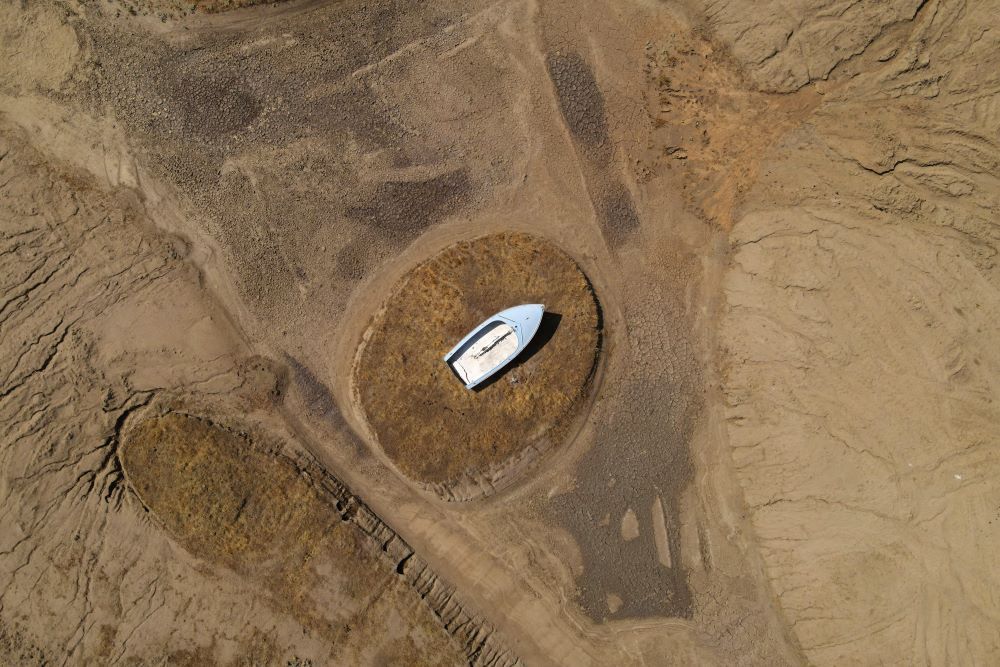 A boat in Madera, California, sits perched on a mound near Hensley Lake July 14, 2021, as soaring temperatures and drought continue to affect livestock and water supplies. (CNS/Reuters/David Swanson)

The new law's climate investments over the next decade are projected to put the U.S. on a path to reduce emissions 40% below 2005 levels by 2030, removing an estimated 1 billion metric tons in emissions, or 10 times the impact of any prior legislation, according to a White House fact sheet. That would bring the country closer to fulfilling its self-determined climate pledge under the Paris Agreement to cut emissions at least 50% within that same timespan.

Scientists have stated that total global emissions need to be slashed at least 45% by 2030, and reach net-zero by 2050, for the world to have a chance to limit average temperature rise to 1.5 degrees Celsius. Exceeding that threshold, scientists say, will lead to far more dangerous heatwaves, droughts, flooding and extreme weather, all of which disproportionately harm already marginalized people and communities who have contributed the least to global warming.

The day the president signed the IRA aligned with a deadline federal agencies gave Western states to devise drastic water conservation plans amid a historic 23-year megadrought affecting a region of 40 million people.

Overall, the new law includes $437 billion in investments over the next decade, with the bulk on energy security and climate change. The law also includes $737 billion in revenue, through a 15% minimum tax on corporations with revenues exceeding $1 billion, increased IRS enforcement, and allows Medicare to negotiate lower drug prices. Analyses of the law project it will reduce the national deficit up to $300 billion and help address inflation.

On climate, the law includes hundreds of billions of dollars in clean energy deployment and manufacturing, and seeks to spur U.S. development of the materials, minerals and parts for solar panels, wind turbines, batteries and other components critical in the transition to powering the country on renewables — many of which currently come from overseas. Additional tax credits aim to assist people to install clean energy and efficiency upgrades at home, including solar panels and heat pumps, and income-limited tax credits to purchase electric vehicles.

It also places a fee on methane and allocates $60 billion in environmental justice initiatives, including improvements in air and water quality in low-income communities, grants to reduce pollution and install clean energy, and funding for coal miners with black lung disease. 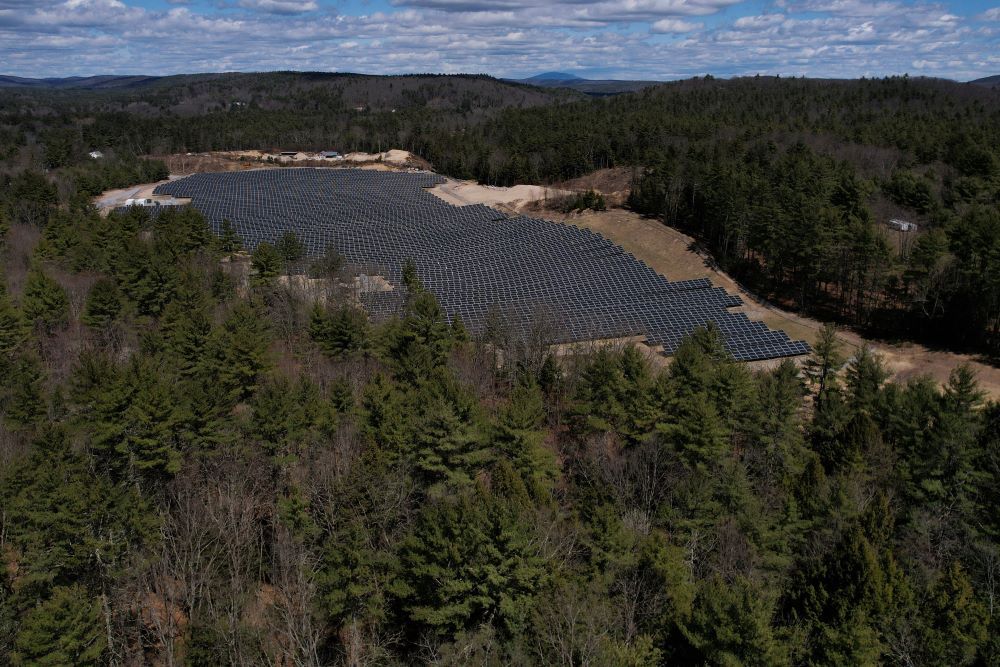 Supporters hope the law, in addition to its new investments, unleashes momentum in the market and among states to accelerate the nation's transition to clean energy and make up the gap in the national emissions-reduction target.

Paired with funding allocated under the 2021 infrastructure package and the recent CHIPS Act on semiconductors, the U.S. is set to spend $80 billion annually addressing climate change. While that amount dwarfs previous efforts, it still pales compared to other budgetary spending, and represents one-tenth of the $839 billion that the House passed in mid-July on a bipartisan basis for defense and the military for the 2023 fiscal year.

The Inflation Reduction Act passed with every Democrat in Congress voting for it, and every Republican opposing it.

"President Joe Biden and Congressional Democrats have passed a law that will make peoples' lives better by addressing healthcare costs and the crisis of climate change and repairing some of the most egregious injustices in our tax system," Mary Novak, executive director of Network, the Catholic social justice lobby, said in a statement.

Both the Evangelical Environmental Network and Young Evangelicals for Climate Action echoed those sentiments. "Tomorrow holds more work, but today we celebrate this historic moment alongside countless advocates who have worked tirelessly for the sake of our common home," the youth evangelical group said in a statement.

In addition to faith groups, the law drew support from labor groups like the BlueGreen Alliance and leading environmental organizations, such as the Sierra Club, 350.org and the Sunrise Movement, though many of them included with their praise concerns about the law's concessions to the fossil fuel industry.

The signing ceremony was the pinnacle of more than a year of legislative ups and downs, negotiations and setbacks around Biden's expansive Build Back Better agenda.

Going back further, it represented the culmination of failed efforts by Congress to pass a major climate bill in the decades since a NASA scientist in 1988 first testified about global warming. When a cap-and-trade bill failed in 2010, the last major legislative attempt at addressing climate change, then-President Barack Obama sought to use executive actions to fill the gap. But the largest piece of his climate efforts, the Clean Power Plan on emissions from coal- and gas-fired power plants, was stalled in the courts and never went into effect.

For years, Catholic and faith groups have lobbied members of Congress to pass major climate legislation. Those efforts accelerated after Biden took office and proposed his Build Back Better agenda.

With the bill's fate fading earlier this year, the Catholic Climate Covenant, along with 10 national partners, launched in May the Encounter for Our Common Home campaign to bring Catholics into dialogue with their senators around the moral reasons to act on climate change. They also organized a sign-on letter endorsed by 285 Catholic institutions, schools, parishes and dioceses.

The U.S. Conference of Catholic Bishops issued multiple action alerts supporting the legislation, including one ahead of the critical Senate vote. In a statement afterward, Archbishop Paul Coakley, head of the domestic justice committee, expressed gratitude for the bill's "many substantial climate provisions" and called it "a meaningful effort to care for our common home."

Despite lobbying at the bishops' conference, dioceses offered less support, with just nine of the 176 signing the Covenant letter to Congress. 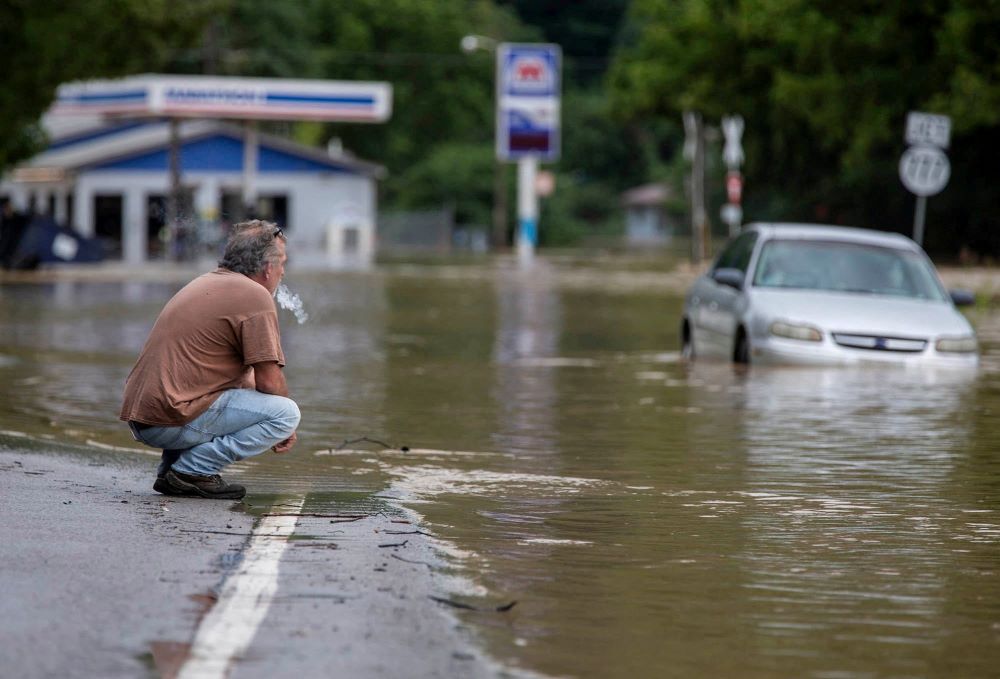 Van Jackson is seen by floodwaters along Right Beaver Creek July 28 after a day of heavy rain in in Garrett, Kentucky. (CNS/USA TODAY NETWORK via Reuters/Pat McDonogh)

The final package in the Inflation Reduction Act shrunk significantly from the $3.5 trillion Democratic lawmakers initially proposed, and less than the $2 trillion bill the House passed in November. The $300-plus billion in climate spending also shrank from the $555 billion under those earlier versions, and shed key goals for environmental groups like a clean energy standard, funds to replace lead pipes and a Civilian Climate Corps.

The law mandates oil and gas lease sales on federal lands and waters, including the Gulf of Mexico and off Alaska's coast, and includes funds for carbon capture technologies and hydrogen energy that environmental activists say prolong the use of fossil fuels. In addition, to gain Manchin's support, Democratic leaders agreed to bring up a separate bill that would expedite the approval process for energy infrastructure projects, including the Mountain Valley Pipeline in Appalachia.

The Climate Justice Alliance, a network of 84 frontline communities and organizations, said that the harms in the Inflation Reduction Act outweigh its benefits and urged Congress to strengthen environmental justice provisions and to reject the side deal on fast-tracking energy projects.

Beverly Wright, executive director of the Deep South Center for Environmental Justice, said in a statement the law "holds both promises and threats for environmental justice communities" and added "Now more than ever, we need bold action that does not compromise on environmental and climate justice for ourselves and future generations."

Franciscan Sr. Joan Brown, director of New Mexico Interfaith Power & Light, said while they are pleased with the new law's investments to reduce emissions, develop clean energy and create jobs, "we are very disheartened by the compromises for oil, gas and nuclear that so adversely affect our frontline neighbors in our region."

Numerous Catholic and faith groups also raised concerns about the provisions that would expand fossil fuel exploration and infrastructure, and they joined other environmental organizations in pledging to oppose the use of federal land for further fossil fuel extraction as well as new oil and gas projects. A group of environmental activists planned to protest outside Schumer's Manhattan office Aug. 18 against the energy project side deal.

"The passage of this bill only strengthens our commitment to keeping fossil fuels in the ground and to standing in solidarity with communities most threatened by extractive projects," said Marianne Comfort, justice coordinator for the Sisters of Mercy.

"So, our advocacy continues."

A version of this story appeared in the Sept 2-15, 2022 print issue under the headline: Biden signs largest-ever action in response to climate change.