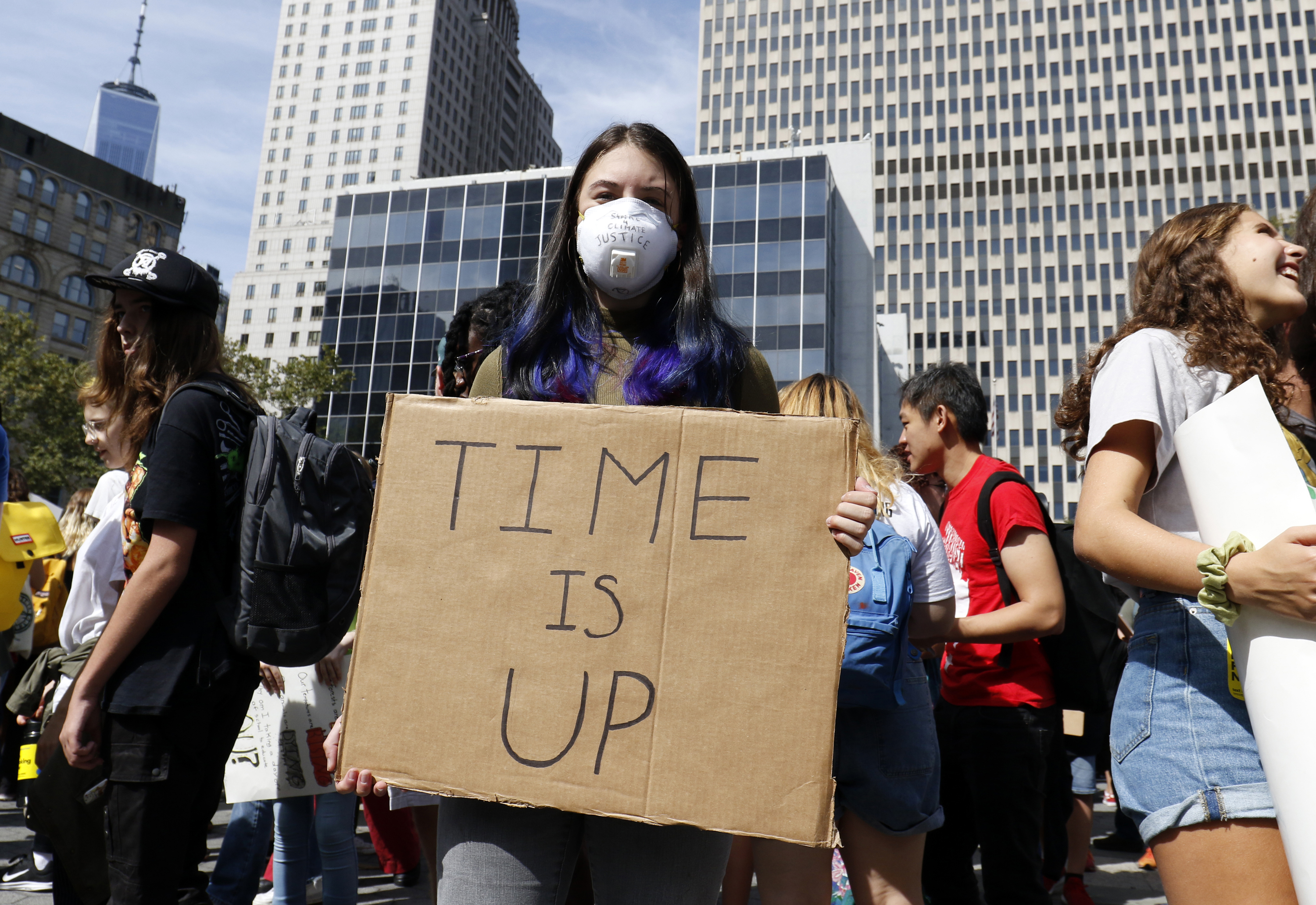 A young woman wears an air-purifying respirator and holds a sign while participating in the Global Climate Strike in New York City Sept. 20, 2019. The youth-led march and rally was one of many demonstrations held around the world urging government and business leaders to take immediate action to combat climate change. (CNS photo/Gregory A. Shemitz)

With the global attention geared to containing the coronavirus pandemic, Catholic organizations called the decision to postpone the upcoming United Nations climate summit understandable, but said it cannot become an excuse to delay critical action on climate change required this decade.

The United Nations Framework Convention on Climate Change announced April 1 that COP 26, its annual climate change conference, would be postponed until 2021 as a result of the global COVID-19 outbreak. The summit was set to take place in November in Glasgow, Scotland. Pre-COP 26 meetings scheduled for June in Bonn, Germany, where the UNFCCC is headquartered, have also been postponed until the fall.

The UNFCCC said in a statement that "Rescheduling will ensure all parties can focus on the issues to be discussed at this vital conference and allow more time for the necessary preparations to take place. We will continue to work with all involved to increase climate ambition, build resilience and lower emissions."

A new date for COP 26 has not been announced.

Expectations were high for COP 26, which was seen as a critical moment for global progress in addressing climate change. Coming five years after the adoption of the Paris Agreement, many have viewed it as a vital checkpoint, with countries expected in the preceding months to submit revised, more ambitious national climate plans that build upon their initial commitments to reduce greenhouse gas emissions under the Paris Agreement.

Currently, global temperatures are projected to warm 3-4 degrees Celsius by the end of the century --- far short of the Paris Agreement goals to limit average global temperature rise between 1.5 and 2 C (2.7 to 3.6 degrees Fahrenheit). Climate scientists have said progress this decade in reducing emissions, cutting them nearly in half by 2030, is essential to put the planet on track to reach net-zero emissions by mid-century and hold global warming to 1.5 C.

The importance of COP 26 magnified even more after COP 25 in December made little progress in finalizing key aspects to implement the Paris Agreement and fell short in generating momentum for increased ambition from nations.

Patricia Espinosa, U.N. climate executive secretary, said in a statement the COVID-19 pandemic is humanity's most urgent threat, "but we cannot forget that climate change is the biggest threat facing humanity over the long term."

"Soon, economies will restart," she said. "This is a chance for nations to recover better, to include the most vulnerable in those plans, and a chance to shape the 21st century economy in ways that are clean, green, healthy, just, safe and more resilient."

Read this next: What does the Paris climate agreement require of countries?

Catholic development organizations expressed understanding with the decision, but stressed it doesn’t create an excuse for countries to pull back on their efforts to address climate change.

"Postponing the COP doesn’t mean the steps to tackle the climate crisis can be delayed," said Neil Thorns, director of advocacy for CAFOD, the Catholic development agency of England and Wales. He urged governments to still put forward new emissions targets, as required this year under the Paris Agreement.

Tomás Insua, executive director of Global Catholic Climate Movement, likewise said the delay of the COP doesn’t change the deadline for countries to submit increased emissions reduction plans, and that Catholics will be watching and expecting ambitious commitments, including the United States.

"At this moment, we need compassion and urgency to help those who suffer in the coronavirus pandemic. But we must also remember that thousands of people die each year from the hunger, sickness, and conflict that climate change increases," he said in an email. "I pray that world leaders will remember the most vulnerable as they make these life-altering decisions away from the spotlight."

The Leadership Conference of Women Religious said in a statement they were disappointed but sympathetic to the postponement in light of the global challenge posed by the coronavirus. They expressed hope that the pause in climate negotiations would not lead to a similar pause in addressing the "existential threat facing humanity" with climate change.

"We sincerely hope that once COVID-19 is vanquished and recovery begins, nation-states, and the global community, will take the necessary steps to ensure that the right of the most vulnerable to integral human development is fully realized, and that our leaders will seize the opportunity to shape a new economy in ways that are clean, healthy, just, and green," LCWR said.

Thorns and other Catholic development leaders joined environmental groups like 350.org in calling for the interim period to be a time to rebuild economies flattened by the coronavirus pandemic in ways that better protect the poor and the environment.

"The current pandemic is showing once again that the current system, as it is, is not able to tackle today's global challenges," said Josianne Gauthier, secretary general of CIDSE, a network of 18 primarily Euro-based Catholic aid agencies. "We were living in a state of emergency even before COVID19 and returning to that 'normal' is not an option: Now policies should be put in place to rebuild societies that are able to address all these interconnected crises, economies that truly put people and planet before profit." 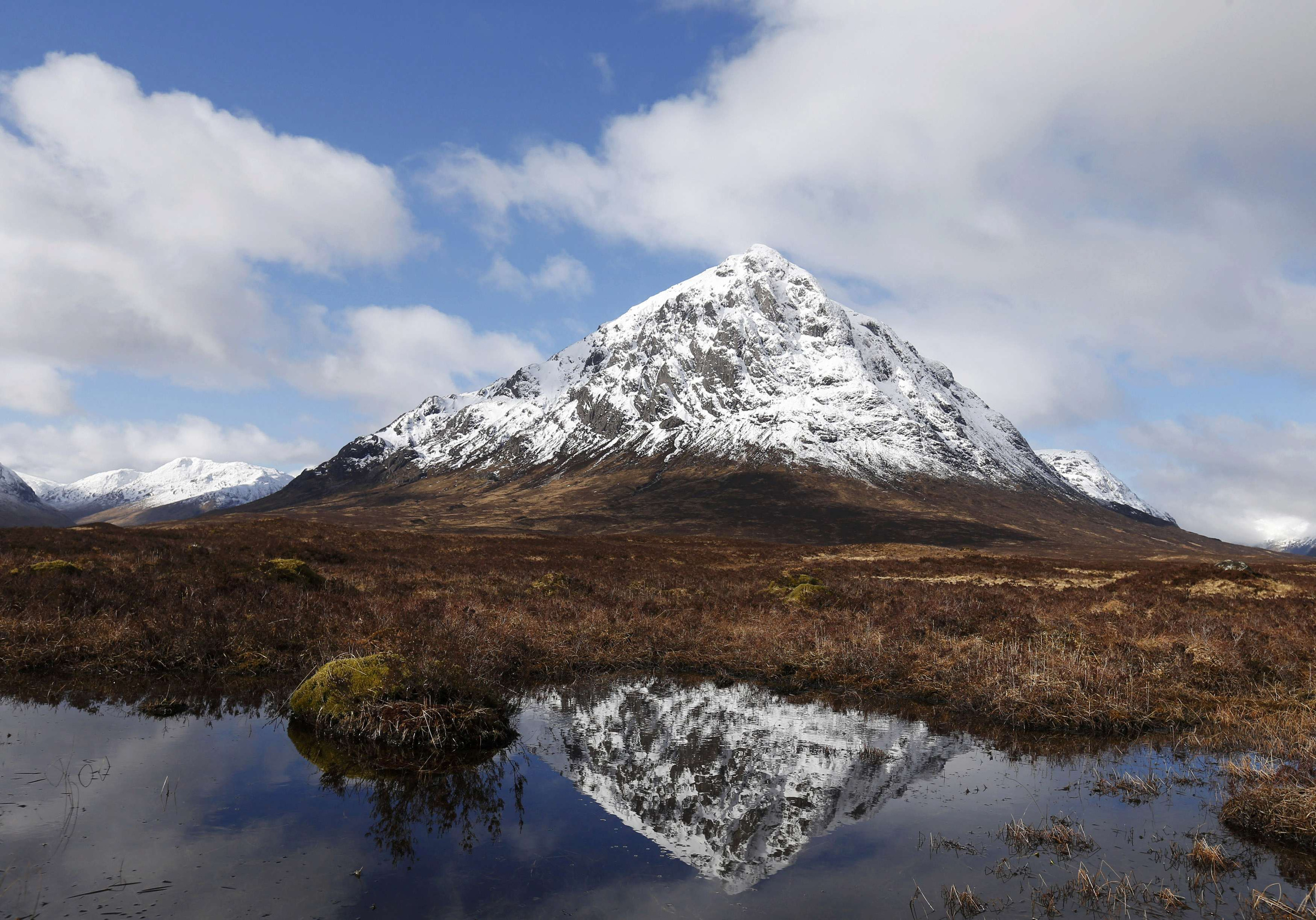 Chiara Martinelli, CIDSE's senior advisor on climate justice, told NCR in a phone interview that their partner organizations will be on the front lines of seeing the impact of the coronavirus and its recovery efforts on the world's most vulnerable communities. She said the pandemic presents an opportunity to learn lessons from that recovery and how to better reorganize economic systems to serve people and protect the planet. One such lesson, she said, is how rapidly governments can respond to emergencies in dramatic ways that climate change requires.

"What we are living today is just a confirmation of what is written in Laudato Si'," she said. "That we need to speed up, we need to really listen to the cry of the poor and the cry of the earth. And we really need to see the interconnectedness of all these social, health, economic and climate crises. And that we cannot imagine to solve one in isolation of the other."

Absent a COP this year, CIDSE plans to continue to engage the European Union to implement its European Green Deal and to become a global leader on climate change. Already, the prime minister of the Czech Republic said the EU should abandon its climate plan because of the virus. Martinelli said it would be a worst-case scenario if governments use the current pandemic and COP delay to justify taking a step back in their climate policies rather than a step forward.

"I think that would be very dangerous for the planet, for the whole humanity," she said.

While no new date has been determined, the delay of COP 26 all but ensures it will take place after the 2020 U.S. presidential election. The outcome of that vote could have major ramifications for global climate action.

In November, President Donald Trump formally began the process to withdraw the U.S. from the Paris Agreement, which will take effect a day after election. Both remaining Democratic nominees, former Vice President Joe Biden and Sen. Bernie Sanders, have pledged to rejoin the climate accord immediately upon election and presented their own climate policies, with Sanders endorsing the Green New Deal.

Read this next: Would Pope Francis back the Green New Deal?

In their statement, LCWR called the climate a common good, and echoed Pope Francis in his belief that all nations have "a clear, definitive, and ineluctable ethical imperative to act" on climate change.

"We call on the nations of the world to seek solutions to the climate crisis and we challenge all people to make personal and communal choices to protect Earth and all creatures who call this planet home," the sisters said.

Beyond COP 26, the coronavirus already has upended a year of anticipated celebration in the environmental movement. This month will witness the 50th celebration of Earth Day, and later this spring Catholics will mark the fifth anniversary of Francis' encyclical "Laudato Si', on Care for Our Common Home."

CIDSE, along numerous Catholic organizations, are still discussing what those events, such as the Vatican-sponsored Laudato Si' Week (May 16-24), might look like in light of the pandemic. One option on the table could see more robust celebrations pushed to September during the Season of Creation, should the coronavirus subside enough to allow for public gatherings at that point.

A goal of those events, Martinelli said, was to not just acknowledge progress on creation care within the church but to call for bolder action on climate around the world.

"I think that we can still make 2020 a big year if we are able to learn all the lessons from this COVID crisis," she said.