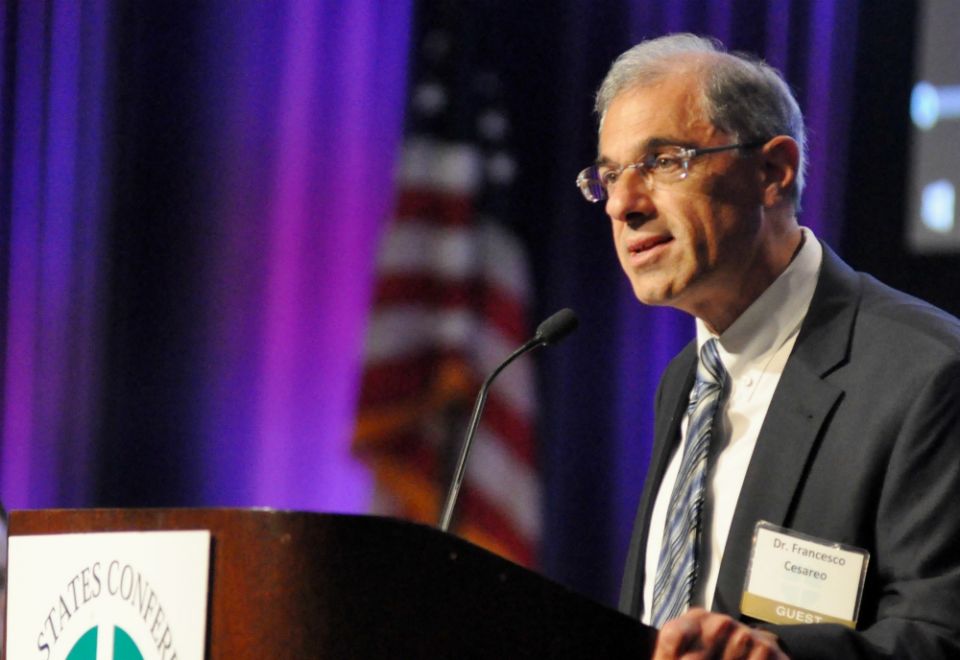 Francesco Cesareo, chairman of the National Review Board, speaks June 14, 2017, during the opening session of the U.S. Conference of Catholic Bishops' annual spring assembly in Indianapolis. (CNS/The Criterion/Sean Gallagher)

The annual audit of the U.S. bishops' Charter for the Protection of Children and Young People revealed that the number of allegations and alleged victims "decreased significantly" from recent years, but also warned of "worrisome signs" of growing complacency in the prevention of child sexual abuse.

The charter, also called the Dallas Charter, requires the bishops to annually audit compliance with the charter and make the audit report public. The report was released June 1 by the U.S. Conference of Catholic Bishops.

The audit was conducted by StoneBridge Business Partners from July 1, 2016 to June 30, 2017. The Rochester, New York, firm has overseen the audit since 2011. Its contract extends through the 2019 audit. The bishops' conference in April opened a search for its next auditor.

The Center for Applied Research in the Apostolate, or CARA, at Georgetown University collects information from the dioceses and eparchies on new allegations of sexual abuse of minors and the clergy against whom these allegations were made.

The full report is available on the bishops' conference website.

During the auditing period, 654 adults in 129 dioceses and eparchies brought forth 695 allegations; 173 have been found substantiated, 242 remained in an ongoing investigation and 30 were found unsubstantiated.

Those overall allegation numbers are nearly half those reported in the 2016 audit, what the auditors attribute to fewer bankruptcy proceedings and changes in state statute of limitations laws.

Six of those have been substantiated, four stemming from the same priest, and the accused priests have been removed from ministry, according to the CARA survey report. Another eight allegations were found unsubstantiated, while five more remained under investigation at the time of the audit's conclusion. Three allegations were classified as "unable to be proven."

In his letter accompanying the report, Francesco Cesareo, chairman of the National Review Board, which advises the bishops on the issues of child and youth protection, said the audit's results demonstrate "an ongoing commitment" by the U.S. bishops to ensuring the charter's provisions are implemented.

"While progress continues to be made, there are worrisome signs for the future revealed in this year's audit that cannot be ignored," he wrote. "Perhaps of greatest concern is a general complacency that the auditors found, which manifested itself in various ways throughout this audit cycle. This complacency was evident in the shortage of resources made available to fully implement programs that adequately respond to the directives and spirit of the Charter."

"Herein lies further evidence of an attitude of complacency as the auditors found re-occurring concerns that were pointed out to the bishop in previous audits. While these concerns are by no means found every diocese, these individual cases suggest that there are cracks in the wall that taken collectively can lead to a resurgence of the abuse of minors by the clergy unless addressed."

"The apparent complacency that is emerging seems to suggest that some believe that the sexual abuse of minors by the clergy is now an historic event of the past. This would be an unfortunate conclusion as this year's audit report makes evident," Ceasaro said, referring to the 24 allegations from current minors.

The audit found three eparchies — Melkite Eparchy of Newton, with its seat outside Boston; St. Nicholas Ukrainian Catholic Eparchy, headquartered in Chicago; and the Syriac Catholic Eparchy of Our Lady of Deliverance in Newark, New Jersey — noncompliant with the charter. Each of the three was found not to have regularly meeting review boards; the Syriac eparchy was also found not to be not to be providing safe environment training or obtaining background clearances.

The eparchies of St. Mary, Queen of Peace in Elmont, New York, and of St. Peter the Apostle in San Diego did not participate in an on-site audit or data collection process.

The lone diocese not to participate, St. Thomas Diocese in the Virgin Islands, was unable to do so because of Hurricanes Irma and Maria, the auditors noted.

Twenty-eight dioceses permitted parish-level audits, five more than during the previous audit cycle. Another 95 dioceses, 10 more than the 2016 audit, indicated to auditors that they perform parish audits "in some form on a regular basis."

Both Cesareo and Deacon Bernie Nojadera, executive director of the bishops' Secretariat of Child and Youth Protection, referenced in their letters accompanying the audit report the #MeToo movement, which in the past year has seen the issue of sexual abuse raised in Hollywood, politics, the media industry and athletics, in particular the abuse of hundreds of members of the U.S. Gymnastics team by former team doctor Larry Nassar.

"The events of the last year show how important it is to carry out the responsibilities listed within the Charter," Nojadera wrote. "The Church must more valiantly carry out Her pledge to prevent the abuse of children, and do more to support those who have been abused, whether within or outside of the Church."

The bishops are set to vote on revisions to the charter during their meeting later this month in Fort Lauderdale, Florida.

A version of this story appeared in the June 15-28, 2018 print issue under the headline: US bishops' annual abuse audit points to concerns about complacency .

Editorial: Finn's resignation is a bitter but necessary reckoning