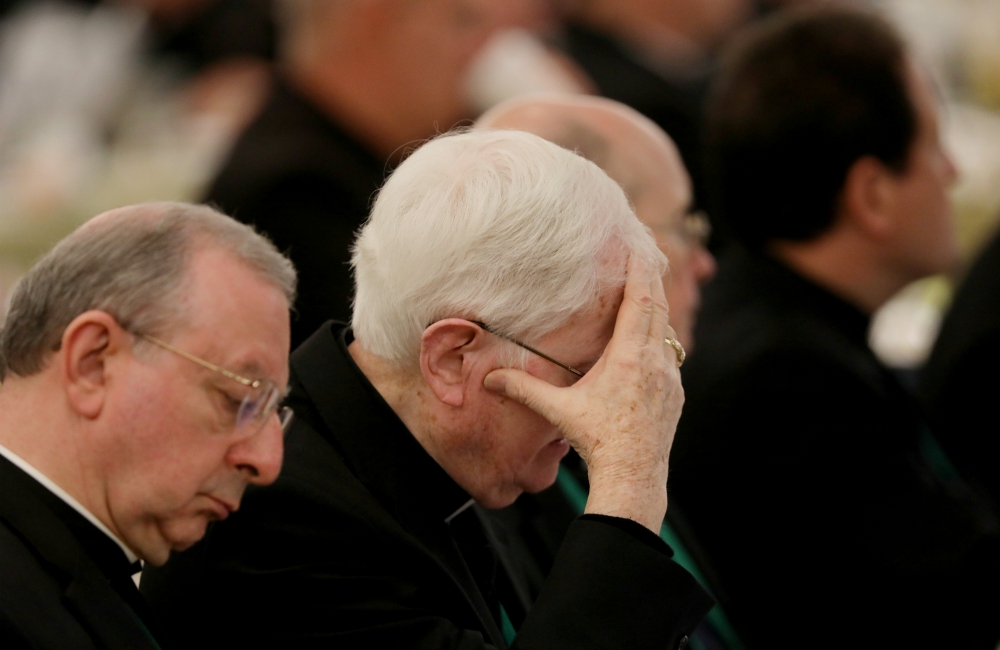 A bishop reacts on the first day of the spring general assembly of the U.S. Conference of Catholic Bishops in Baltimore June 11. (CNS/Bob Roller)

At a June 11 press conference at the U.S. bishops' conference meeting, Cardinal Daniel DiNardo of Galveston-Houston argued that the church was turning a proverbial corner in the sex abuse discussion.

"We were up against real challenges over the past year," he said. When the bishops approve a plan, as expected before they leave here June 13, the result "will be very good for us in the U.S. Catholic Church," DiNardo promised.

Despite his optimism, there is a palpable sense of weariness surrounding this meeting. Only a handful of protesters have shown up so far, most victims' groups staying away. The press presence is muted, as many religion reporters have opted to cover the meeting of the Southern Baptist Convention in Alabama, where the major topic under discussion is, ironically, sex abuse in that denomination.

At the Catholic bishops' meeting, they are dealing with the fallout from a year of events that shook public confidence in their leadership.

The list bears repeating, if only to emphasize how tumultuous the background is:

It began last summer with the revelations about former Cardinal Theodore McCarrick and a damning Pennsylvania grand jury report. That was followed by a November bishops' meeting where the Vatican urged the bishops to hold back on approving proposals to discipline offending fellow bishops, a bishops' retreat in January in Chicago, followed by a worldwide Vatican meeting in February, which resulted in Pope Francis' issuing a document on the topic for the universal church.

It is a list, in its routine, that rivals President Donald Trump's penchant for provocative tweets for the breadth of its regular onslaught. The list is long, and it doesn't even include flare-ups of sex abuse issues and charges of cover-up that continue to afflict dioceses such as DiNardo's Galveston-Houston and Buffalo, New York, along with money and abuse charges lodged against retired Bishop Michael Bransfield of Wheeling, West Virginia. And that still doesn't include the explosive charges issued by former papal nuncio Archbishop Carlo Maria Viganò.

It is a cascade of events and actions, now seemingly coming to a culmination at this meeting. The bishops are expected to implement a so-called metropolitan plan, which will place the investigating of offending bishops as the responsibility of more senior bishops who lead archdioceses.

While implemented with the help of lay review boards, and consistent with Catholic ecclesiology that calls upon bishops to exert responsibility, its weakness remains. Bishops are being called upon to investigate fellow bishops.

"The metropolitan should not be the sole gatekeeper," said Cesareo, who also urged the Vatican to quickly offer up what it knows about the McCarrick scandal situation.

But the enthusiasm for leaving responsibility, not just consultative and investigative powers, to lay boards for investigations into bishops was not evident at the meeting. No bishop asked Cesareo to clarify his points, and his presentation was met with silence. Most bishops want to move in step with the Vatican, and others, of a more liberal bent, argue that some lay groups promoting lay boards with ultimate authority are pushing their own vision of the church, dominated by wealthy Catholics anxious to earn a foothold over church policy on gay priests and other sensitive issues.

Archbishop Christophe Pierre, Vatican nuncio to the United States, in a statement read to the meeting, urged the bishops to be thorough and careful. He praised them for deferring action until now, resisting the temptation to endorse proposals in November in the cause of urgency. Unity should prevail over conflict, he said.

That type of appeal to unity is a frequent call at these meetings, with occasional instances of jarring interventions.

One bishop suggested that his fellow bishops be aware of the impact on sexual morality of Woodstock, an event that happened when some of them were in parochial school.

Enthusiasm in the conference room peaked when Auxiliary Bishop Robert Barron of Los Angeles offered a presentation on a more contemporary concern, the growth of nones, those young Catholics who have left the church behind.

Bishops are, at their best, pastors, and they warmed to the topic that goes to the heart of whether the church has a sustainable future in this country. Barron told them that about half of millennial Catholics are out the door. Those Rite of Christian Initiation rituals where parishes welcome newcomers? Of every new Catholic that comes in that door, more than six are leaving every year, said Barron.

When do they leave? The median age is 13. Barron argued that there is hope: There is relatively little militant atheism in American life. Most do not leave because they are anti-religious. And, he said, social media is gurgling with discussions about religion, much involving former Catholics who still express an interest in faith.

Barron pointed to the "Jordan Peterson phenomenon" as an example of effective engagement, citing the Canadian psychology professor's popularity on social media with millions of young people, young men in particular. The comment drew controversy on Twitter, where some characterized Peterson's views as reactionary and misogynistic.

At the meeting, a number of bishops expressed the view that the millennial nones should be at the top of agenda of their next gathering in November.

"This is the critical issue," said Bishop Joseph Strickland of Tyler, Texas. He added, however, that it wasn't the only one, as dealing with sex abuse remains a priority for this meeting.

"One is connected to the other," he said.

Other bishops noted that a church with a reputation for covering up sex abuse will never be attractive to young Catholic faith seekers. They realize that they need to get that right before they can ever hope to move on to the pressing issue of evangelizing younger Catholics. Dealing with the sex abuse crisis remains priority No. 1.