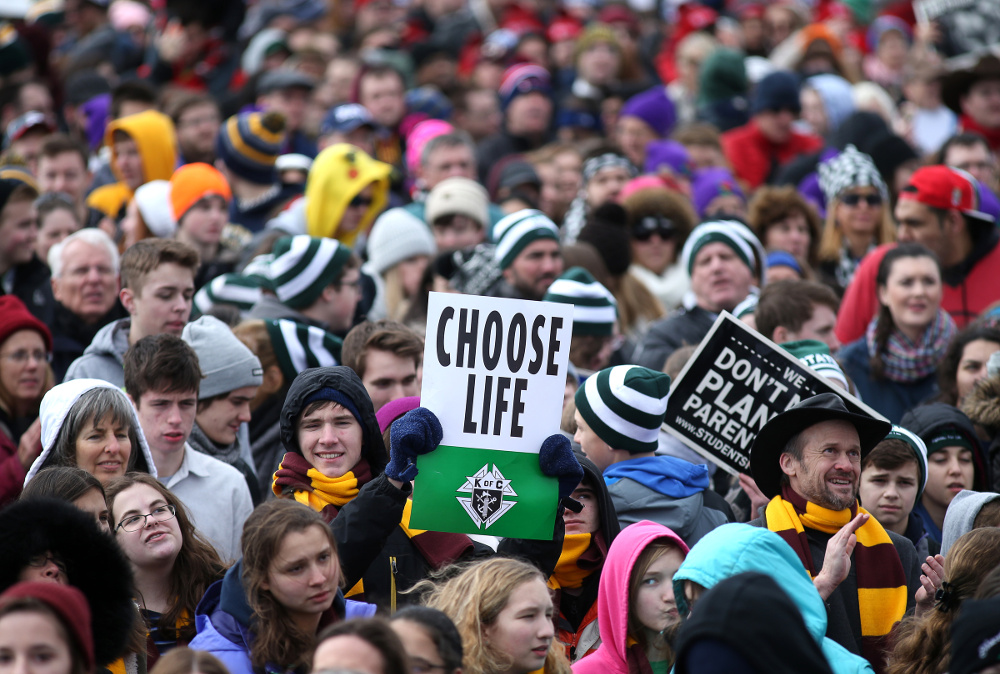 In 2017, Kristen Day was one of relatively few women to attend both the record-breaking Women's March, whose organizers voiced strong support for abortion rights, and the March for Life, an anti-abortion gathering a few days later.

But this year Day, a Democrat, says she's only returning to one of them —  and it won't be the rally that last year drew millions across the country, largely in protest over the way President Trump talked about and treated women.

"I'm not going to the Women's March this year," she said. "I don't feel welcome."

Day, a Catholic and executive director of Democrats for Life of America, explained that her decision was the result of a "bad experience" at last year's Women's March. She said that as the demonstration drew to a close, she was accosted by a marcher who disliked her sign, which read "Pro-life for the whole life." The attacker allegedly began yelling and banging on her car until police eventually intervened.

Day is one of many progressives who oppose abortion while also touting left-leaning views on other issues, a position she says is increasingly tenuous in today's polarized political climate.

"A lot of Democrats believe in science, climate change and that life begins in the womb," Day said. She later added: "These are liberal people. They're not conservative at all: They support minimum wage increases, maternity leave and immigration reform."

Yet political strategists are still grappling with how to engage Day and other anti-abortion Democrats, many of whom root their anti-abortion position in their religious faith. And as Democrats express hope of sweeping the U.S. House and Senate this November at the hands of an energized progressive base, it's unclear whether the party will muster robust engagement of this subgroup, or if doing so is even in their interests.

The number of Democrats who are ambivalent about — or even outright opposed to — abortion is sizable. A 2017 Pew Research survey reported that 22 percent of Democrats believe it should be illegal in all or most cases.

According to 2014 polling data provided to Religion News Service by the Public Religion Research Institute, 24 percent of that group are black Protestants; white evangelical Protestants and Hispanic Catholics account for 14 percent each; 12 percent are religiously unaffiliated, and the rest are small slivers of various religious groups such as white mainline Protestants, Jews, Muslims and others.

But these numbers don't answer the question of what progressives can do to accommodate this group, or if doing so would be a boon at the ballot box.

Erica Sackin, director of political communications for Planned Parenthood Action Fund, says headline-grabbing controversy obscures an energized progressive electorate galvanized around what she called a "mainstream political belief" — namely that most Americans believe abortion should be legal in all or most cases, a claim backed by data from Pew Research.

"At the end of the day, everybody has different personal feelings about abortion," she said, noting that Planned Parenthood has its own religious advisory board. "What people across the board can agree on is that it's not the government's job to make that decision for people."

Nevertheless, the Democratic Party remains embroiled over the issue. Tensions came to a head last July, when Democratic Congressional Campaign Committee Chair Ben Ray Luján declared there would be no "litmus test" on abortion for Democrats seeking office in 2018. The line outraged NARAL Pro-Choice America President Ilyse Hogue, who described it as "an ethically and politically bankrupt strategy." It also appeared to contradict Democratic National Committee Chairman Tom Perez, who said in April that "every Democrat" should support abortion rights, adding, "That is not negotiable and should not change city by city or state by state."

Luján's comments echo those of other prominent progressives, however. House Minority Leader Nancy Pelosi, D-Calif., said in April that "of course" it's possible to be a Democrat and hold anti-abortion views, and Sen. Bernie Sanders, I-Vt., even endorsed an anti-abortion Democrat in Nebraska.

"We have got to appreciate where people come from and do our best to fight for the pro-choice agenda," Sanders told NPR. "But I think you just can't exclude people who disagree with us on one issue."

According to Day, the back-and-forth may be less about what the majority of Americans think and more about efforts by Democrats to win back conservative parts of the country. She pointed to a 50-page report released in January and co-authored by three-term U.S. Rep. Cheri Bustos, D-Ill. The report, "Hope From the Heartland: How Democrats Can Better Serve the Midwest by Bringing Rural, Working Class Wisdom to Washington," notes that liberal-leaning Americans in Midwestern rural areas often express anti-abortion views. Former Ohio state Rep. Nick Barborak reportedly told the authors that if Democrats expel anti-abortion Democrats, "we might as well write off eastern Ohio."

But looking ahead toward the midterms, the real question is whether anti-abortion Democrats in these regions prioritize the issue as much as their Republican counterparts. Planned Parenthood's Sackin cited the recent U.S. Senate race in Alabama as evidence they do not: After all, Democrat Doug Jones, who advocated for abortion rights, defeated Republican Roy Moore, who was strictly anti-abortion, in deeply red Alabama. Moreover, she noted some pollsters argue abortion only played a minor role in the election, as Alabama voters who cast their ballots solely on the issue were overwhelmingly Republicans and never "gettable" voters for Jones in the first place.

Day read the results differently. She argued Jones never would have beaten an anti-abortion candidate in the heavily evangelical Christian state were it not for the numerous allegations against Moore of inappropriate behavior toward teen girls.

Regardless, Day isn't giving up her fight anytime soon. She said she's considered leaving the Democratic Party in the past but was always brought back by phone calls and messages of encouragement from people across the country.

"There are (millions of) pro-life Democrats out there who want me to fight for them, and bring the party back to life — in two senses of the word," she said.