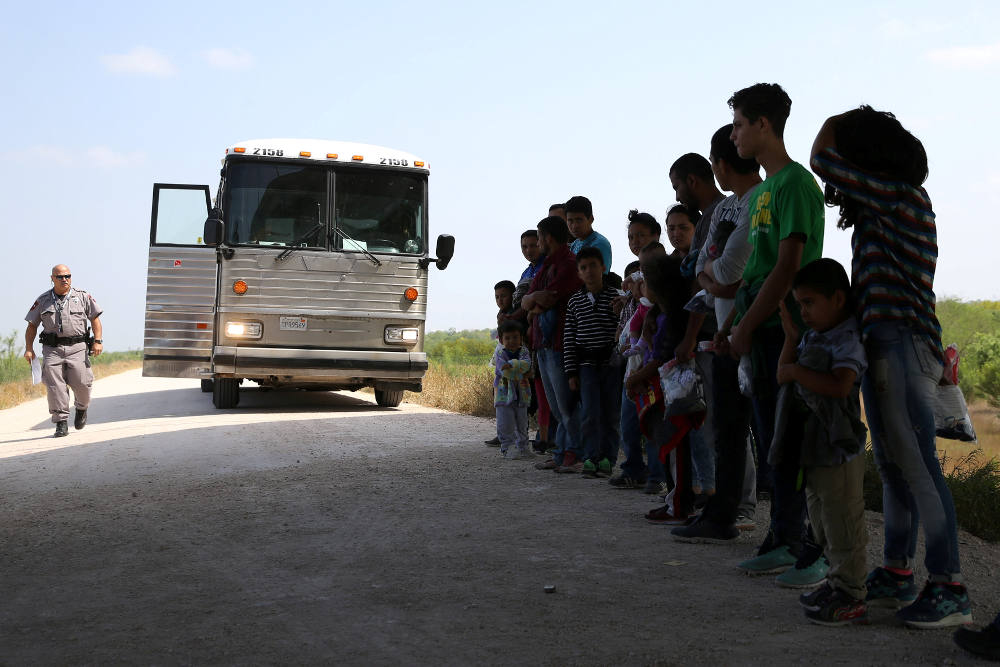 Immigrants turn themselves in to Border Patrol agents April 2 after illegally crossing the border from Mexico into the U.S., and wait to be transported to processing center near McAllen, Texas. (CNS photo/Loren Elliott, Reuters)

A delegation of U.S. bishops will head to the nation's southern border Monday as national attention remains focused on the separation of immigrant families who have attempted to enter the country illegally.

Cardinal Daniel DiNardo, president of the U.S. Conference of Catholic Bishops, will lead the delegation to the Brownsville Diocese, situated at the southern tip of Texas where it borders central Mexico.

The move comes amid continuing outrage with the Trump administration's "zero tolerance" policy toward immigrants attempting to enter the country illegally, often in an effort to escape violence or poverty in their homelands, that has resulted in thousands of children separated from their parents.

While President Donald Trump signed an executive order June 20 directing an end to the practice of separating families, questions persist regarding his administration's efforts to reunite those families that were split apart, including 2,300 children.

Details for the border visit, first reported by Crux, remained scant as of Friday afternoon.

A press advisory issued by the U.S. bishops stated only that the bishops will visit the diocese and hold a press conference Monday night at the Basilica of Our Lady of San Juan del Valle, in San Juan, Texas, "to offer reflections on engagements with the Catholic community, U.S. government officials and Catholic Charities of the Rio Grande Valley organizations on the issue of family separation."

The trip's full schedule has not been finalized, the advisory said, nor has the full delegation beyond DiNardo, archbishop of Galveston-Houston, and Brownsville Bishop Daniel Flores.

The idea of a delegation was raised by Newark, New Jersey, Cardinal Joseph Tobin earlier this month during the bishop's annual spring assembly, held this year in Fort Lauderdale, Florida. He said that sending bishops to inspect detention facilities where children are being kept would serve "as a sign of our pastoral concern and our protest against this hardening of the American heart."

"These latest developments are consistent with the sort of cardiosclerosis that has begun in our country, and it concerns across-the-board life issues," Tobin said to his fellow bishops. "It is the hardening of the American heart, and the invitation is to harden our hearts further."

Other bishops at the meeting followed suit in endorsing the idea, with the bishops' working group on immigration issues — led by Los Angeles Archbishop Jose Gomez and Austin, Texas, Bishop Joe Vasquez — agreeing to further explore the possibility.

Five days after the bishops' meeting concluded, the president signed an executive order that kept in place zero tolerance for illegal entry into the country and added that it his administration's policy "to maintain family unity" and families should be detained together while parents are prosecuted.

The Trump administration has sought permission from a federal judge in California to exceed a 20-day limit on detaining children with their parents set by a 1997 policy known as the Flores settlement.

Dozens of bishops joined many religious communities and Catholic organizations in issuing statements condemning the Trump administration's separation of families, reacting to images of immigrant children held in chain-link cages and stories of families unaware of where their loved ones were.

Hundreds of people contacted U.S. bishops' offices in Washington offering to foster children who have been separated. Catholic Charities and Catholic Extension have joined other faith-based organizations in working to house children and reunite families.

On Thursday, nearly 600 women were arrested on Capitol Hill during a protest against the president's immigration policies. 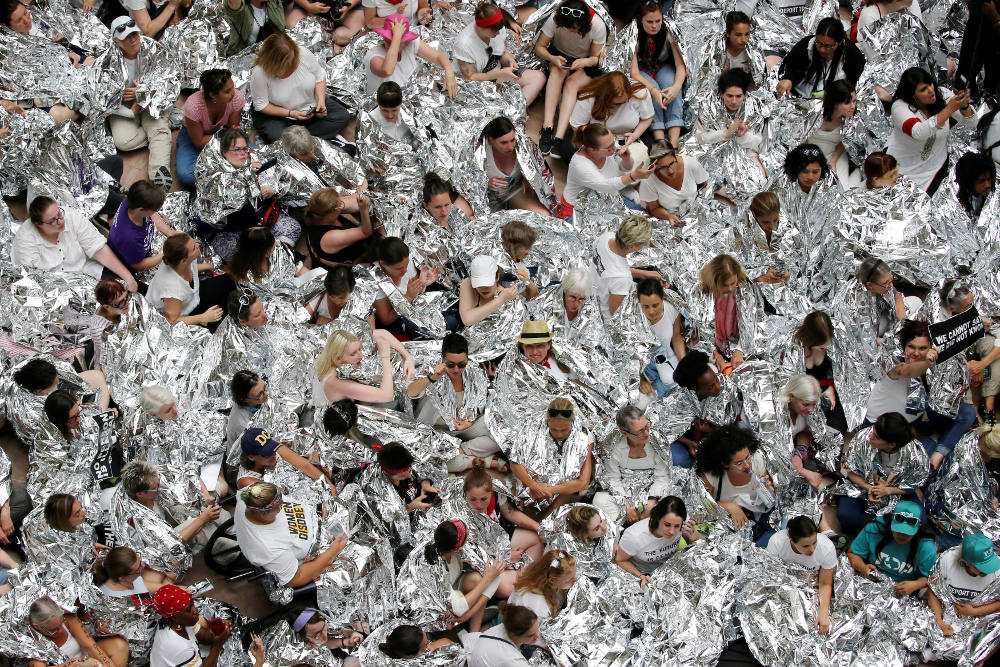 Immigration activists wrap themselves in silver blankets inside the Hart Senate Office Building in Washington June 28. The blankets symbolize immigrant children that were seen in similar blankets at a U.S.-Mexico border detention facility in Texas. (CNS photo/Jonathan Ernst, Reuters)

In mid-June, the bishops of San Diego joined bishops from Mexico in celebrating Mass at the border. A similar scene played out in 2014 when a dozen bishops from three countries, including Boston Cardinal Sean O'Malley, held a Mass in Nogales, Arizona, where they distributed Communion through the border fence.

The upcoming trip to the border comes two years after Pope Francis ended his papal visit to Mexico by visiting the border it shares with the U.S. There, he celebrated Mass within 100 yards of the border fence.

"This crisis, which can be measured in numbers and statistics, we want instead to measure with names, stories, families," Francis said in his homily of the migrants' journey from Central America north. "They are the brothers and sisters of those excluded as a result of poverty and violence, drug trafficking and criminal organizations."

At the time, then-candidate Trump criticized the pope by saying he did not understand "the danger of the open border we have with Mexico" and suggesting he was being used by the Mexican government.