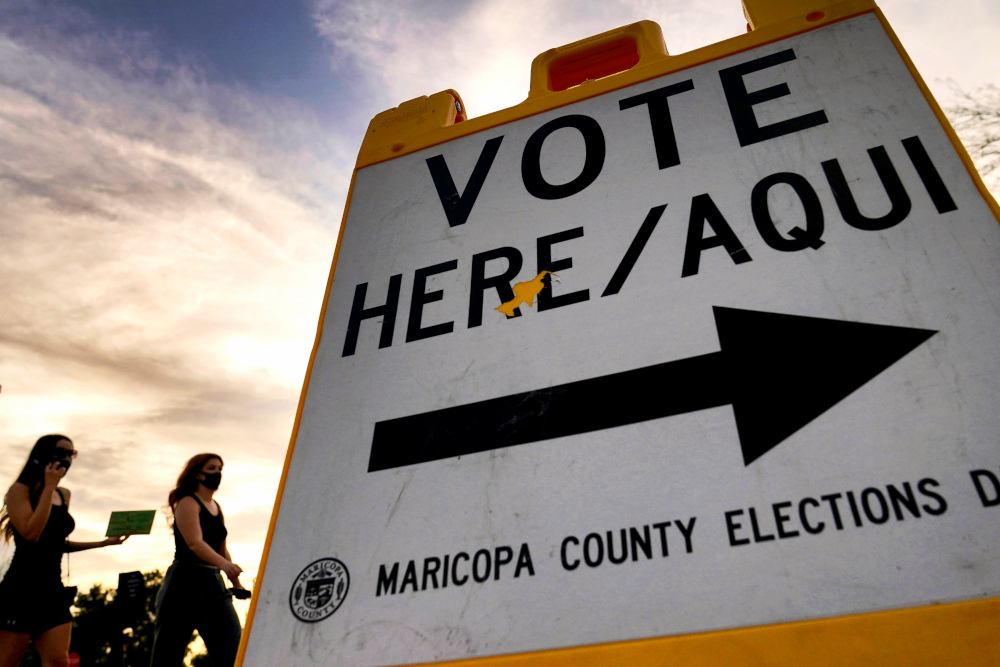 To Petra Falcon, who leads the faith-based nonprofit Promise Arizona, the support for Joe Biden among Latino residents of the state was a referendum on values.

And, in 2020, the values that bubbled to the surface were urgent issues facing the daily life of residents: Immigrant rights, COVID-19 relief and jobs were paramount.

For a group that is majority Catholic — and thus often expected to vote primarily against abortion — Latino residents in Arizona largely voted Democrat in this presidential election, helping to turn the state blue for the first time since 1996.

In this election, Falcon said, many didn't believe that President Donald Trump was "pro-life" given "how he made decisions" surrounding the border wall and how he disparaged immigrants.

If immigrant Catholics feel they have to vote for a candidate who opposes abortion, but that candidate isn't going to support immigration reform, "that's when their conscience has to come into play," Falcon said. And it's not just about immigration, she added, but also labor issues, transportation and education.

"It was hard for people to really understand Trump and his positioning on pro-life when he was so unwilling to support immigrants," she said. "For us, life is much broader."

Falcon, a fourth-generation Arizonan and a Catholic, founded Promise Arizona 10 years ago when she organized a prayer vigil at the state Capitol to try to prevent then-Arizona Gov. Jan Brewer from signing SB 1070, known as the "show me your papers" law. The vigil, Falcon said, lasted 103 days and ended when a federal judge temporarily blocked most of the law from taking effect.

Since then, Promise Arizona has focused on registering Arizona residents to vote. The group is nonpartisan and has never endorsed a presidential candidate, but did advocate against former Maricopa County Sheriff Joe Arpaio, whose department was found to have targeted Latinos. "Because he was just devastating immigrants," Falcon said.

Immigration reform is a faith issue, Falcon said, because "we're supposed to help the most vulnerable."

In Arizona, 23.6% of eligible voters are Latino, and in Maricopa County, which accounts for 60% of the state's vote, 31% of residents are Latino. While 59% of Latinos in Arizona overall voted for Biden, according to AP VoteCast, those of Mexican descent turned out in even higher numbers for the former vice president (65%). 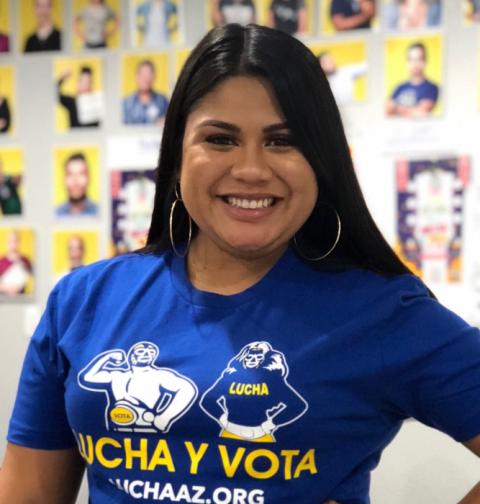 It is organizers like Falcon and groups like Living United for Change (LUCHA), Poder in Action and Chicanos Por La Causa — who have spent years registering voters and advocating against anti-immigrant laws like SB 1070 and against Arpaio — who are being credited with galvanizing a surge of Latinos who voted for Biden and helped turn the Grand Canyon State blue.

Stephanie Maldonado, a campaign director with LUCHA in Arizona, recognizes that faith among Latinos is a "big factor in how we make decisions in our everyday lives."

That's why, when speaking to residents and voters, Maldonado sought to understand the day-to-day issues that impact her neighbors, such as the pandemic, health care, education and immigration.

"I think that in order for us to shape the narrative when it comes to religion, and not having to choose your faith or a candidate, it starts with the issues," she said.

When considering the faith of voters, Maldonado said, "the best thing we were able to do was just have conversations based on our own experiences, based on our own stories and connect with them on a deeper level and try to meet halfway."

A Latino Decisions poll conducted on the eve of the election found that the pandemic, jobs and health care costs were the top issues for Latinos in Arizona. The survey found that 66% of Latinos felt Trump ignored early warning signs of COVID-19, and 65% said racism increased over the past four years. Additionally, 76% said U.S. immigration policy should focus on creating "a humane system that is fair to all."

Even Catholic Bishop Thomas J. Olmsted of Phoenix appeared to encourage a broader view of "pro-life" in this election cycle.

In 2016, less than two months before Trump was elected, Olmsted made a plea to voters in his "Catholics in Public Square" booklet to protect "innocent human life," the Catholic News Agency reported.

Catholics, Olmsted said, "may never legitimately promote or vote for any law that attacks innocent human life." He added: "being right on all the other issues can never justify a wrong choice on this most serious matter."

Fast-forward to 2020 when Olmsted, in a video with Arizona Catholic Conference bishops, again urged voters to stand against abortion, but also called on Catholics to consider the plight of immigrants.

"Catholic teaching reminds us that the protection of innocent human life from abortion is the preeminent issue of our time. Accordingly, respect for the human dignity of all people, including immigrants, refugees and the poor, are also critical parts of Catholic social teaching," he said. 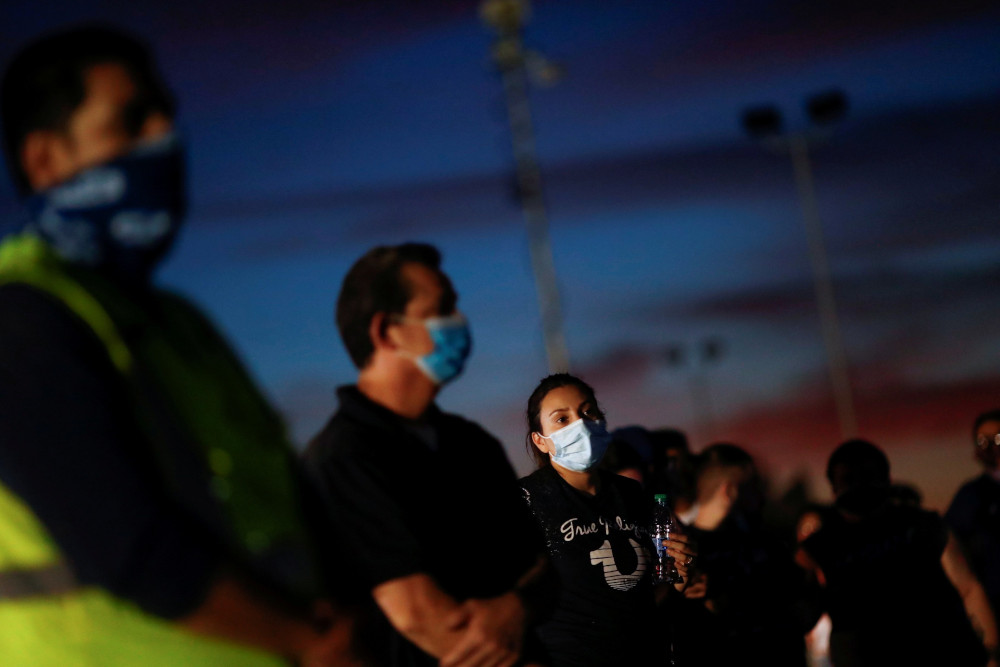 And in nearby El Paso, Texas, a U.S.-Mexico border city with deep Catholic roots, leaders from the faith-based Hope Border Institute and the local Roman Catholic diocese urged the area's mostly Latino Catholics to broaden their focus from abortion to immigration and the death penalty.

Election data also illustrates a divide among Latino Catholics, who largely voted for Biden, and white Catholics who went for Trump.

To David Gibson, director of Fordham University's Center on Religion and Culture, the election results "show that the Catholic Church is as divided as our nation, but the real divide is race and ethnicity, not theology."

Gibson told The Associated Press the gap between the white Catholic vote for Trump and the Latino vote for Biden presents a challenge for church leaders, especially if the Republican Party continues to court white voters with anti-immigrant rhetoric.

Alicia Contreras, executive director of Corazón — a nonprofit interfaith group affiliated with Faith in Action — agrees. Corazón reached voters over the phone, social media and through a parade in late October encouraging Latino residents to vote.

On the ground, residents talked about the importance of national paid leave during COVID-19. Education has also been a top priority. Corazón focused on advocacy around a statewide ballot initiative that will create a new tax to help fund education in the state.

To Contreras, the election results in Arizona are a testament to the grassroots organizing work there over the past 10 years.

"These largely Latinx families are now eligible to vote. They have grown up under these attacks, and they're pushing back," Contreras said.

"This is a community effort, and the community has spoken," she said.

The Associated Press contributed to this report.