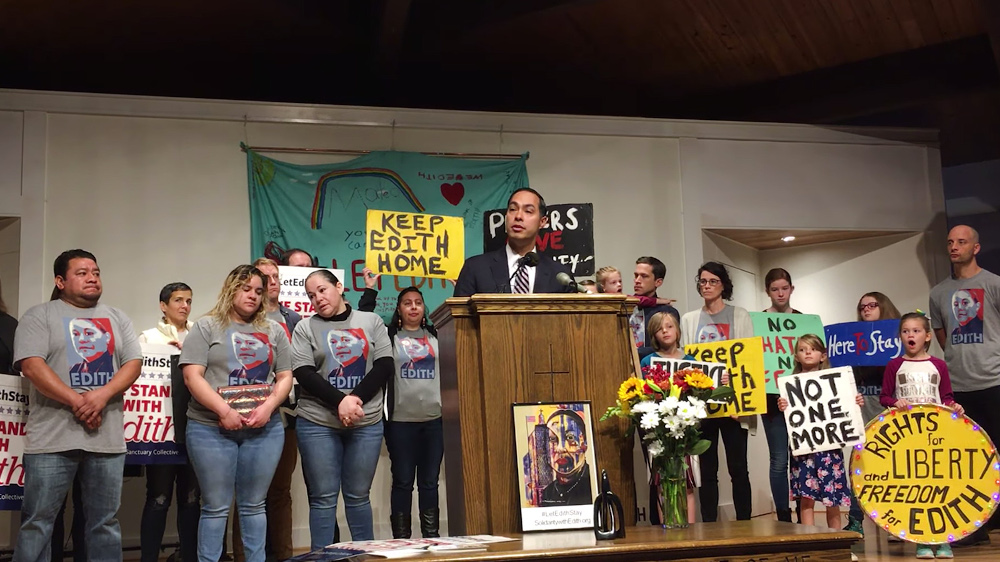 An undocumented woman living in an Ohio church to avoid deportation met with Democratic presidential candidate Julián Castro on Oct. 15, one of several Democratic White House hopefuls now signaling support for her cause and the New Sanctuary Movement.

Castro visited Columbus Mennonite Church in Columbus, Ohio, to meet undocumented Mexican immigrant Edith Espinal ahead of the fourth Democratic debate, scheduled to take place at Otterbein University later in the day. Espinal has been living at the church for two years as a participant in the New Sanctuary Movement — a campaign in which churches and other houses of worship allow immigrants at risk of deportation to live on their property to stave off their removal by officials.

At a news conference convened during his visit to the church, Castro said Espinal's case reflected the plight of many immigrants.

"I wanted to come here today because Edith's case is one of so many, of people who are caught up in an immigration system that is broken — of human beings that are suffering because our laws are bad," said the former secretary of the U.S. Housing and Urban Development Department, according to video recorded by The Columbus Dispatch. "Our system is caught up in a bureaucracy that has not reflected our best values as a country."

He added: "I came here because I want to challenge our country to do better, and this administration to do better."

According to Espinal, Castro met with her and her family privately for roughly 20 minutes. Speaking in English and Spanish and intermittently translated by her 18-year-old daughter, Stephanie Gonzalez, Espinal told Religion News Service she was "happy" that Castro visited her, and she expressed hope that he might be able to mention her story during Tuesday night's debate.

"I know I need to keep fighting to keep my family together," she said.

She noted that she has extended an invitation to all Democratic presidential candidates participating in the debate to visit her and that she has been in communication with Beto O'Rourke's campaign. Gonzalez planned to attend Tuesday night's debate, with hopes of speaking with candidates.

"For him to prioritize that — being here and being with Edith — I think was a message in and of itself," Miller said.

Miller noted that Castro also discussed DAPA — Deferred Action for Parents of Americans — an Obama-era policy that offered legal protection for certain undocumented immigrants who had lived in the United States since 2010 and had children who were either citizens or lawful permanent residents. The policy was met with numerous legal challenges during the Obama administration and was rescinded in 2017 under President Donald Trump.

During his visit, Castro promised that if elected president he would "break up ICE" — U.S. Immigration and Customs Enforcement — and that people in Espinal's situation would not be deported.

Two other candidates — Sens. Elizabeth Warren of Massachusetts and Bernie Sanders of Vermont — also extended their support for Espinal via Twitter.

In a message posted Monday evening, Warren admonished the Trump administration for wanting to deport Espinal, who Warren noted "has lived in the United States for decades, raising a family and building a community." She told Espinal to "stay strong," adding, "When I'm president, I will protect asylum-seekers."

Sanders tweeted his message of support on Tuesday.

"When we are in the White House we will put a moratorium on deportations," he wrote. "Millions of immigrants like Edith living in constant fear is not what this country is about."

The New Sanctuary Movement emerged around 2014 and now encompasses hundreds of houses of worship nationwide, according to advocacy group Church World Service. The movement harks back to a separate sanctuary movement that thrived in the 1980s, when churches clashed with federal authorities for taking in immigrants fleeing to the U.S. from Central America.

Unlike its predecessor, the contemporary New Sanctuary Movement relies on an internal 2011 U.S. Immigration and Customs Enforcement memo that discourages government agents from raiding "sensitive locations" such as churches, hospitals and schools.

Several Democratic presidential candidates currently co-sponsor a bill in the U.S. Senate that would codify much of the memo into law, including Warren and Sens. Kamala Harris of California, Cory Booker of New Jersey and Amy Klobuchar of Minnesota.

A representative for Sanders said he would back the bill as well, and a spokesperson for Mayor Pete Buttigieg of South Bend, Indiana, told RNS earlier this year that he "strongly supports" the bill.

"That has been part of (religious history) for centuries — the idea of literally refuge in a church," Buttigieg told RNS when asked about the movement in a separate interview earlier this year. "It's something that shows you just the point we've come to, that people feel that they need to turn to a church for physical refuge from the federal government at a time like this."

Other Democrats have voiced support for the movement and the immigrants it seeks to help. In September, Ingrid Latorre — an undocumented immigrant who is living in sanctuary in Boulder, Colorado — was visited at the church where she lives by Reps. Alexandria Ocasio-Cortez, D-New York, and Joe Neguse, D-Colorado.