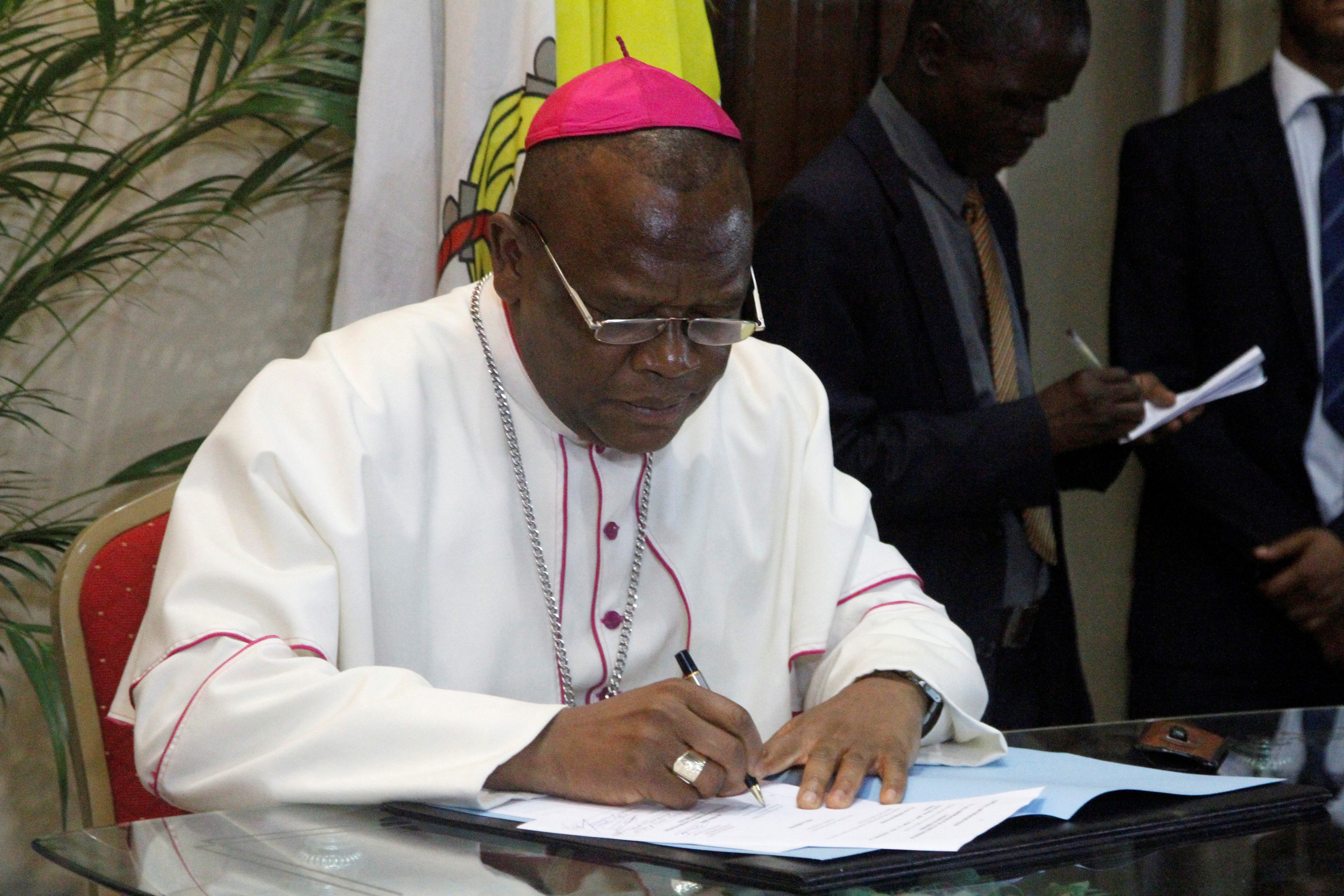 Congolese Archbishop Fridolin Ambongo Besungu of Kinshasa is pictured in a 2016 photo. The newly installed head of one of Africa's largest archdioceses will vigorously defend democracy and human rights, while also seeking to reconcile political opponents, said church sources in Congo. (CNS/Reuters/Kenny Katombe)

The newly installed head of one of Africa's largest archdioceses will vigorously defend democracy and human rights, while also seeking to reconcile political opponents, said church officials in Congo.

Archbishop Fridolin Ambongo Besungu is "above all a pastor, who displays Christian frankness in what he says and shrewdly understands given situations," said Fr. Andre Masinganda, deputy secretary-general of the Congolese bishops' conference. "He's also particularly sensitive to justice, peace and human rights and can be counted on to promote these values with a firm stand."

Ambongo, vice president of the bishops' conference, began his ministry as archbishop of Kinshasa in late November, replacing 79-year-old Cardinal Laurent Monsengwo Pasinya, who held the post for 11 years and was a member of the Council of Cardinals advising Pope Francis on reforms.

Masinganda told Catholic News Service that Ambongo, who was installed Nov. 25, would be ready to work with all sides in Congo's bitter political disputes.

"He shows an open spirit and is always ready to calm and unify by considering the views and convictions of others," Masinganda said, adding he hoped political leaders would show a new willingness to cooperate.

Masinganda said he expected Ambongo to gain a similar profile to Monsengwo in international church affairs, as well as in contacts with foreign governments.

"He has a great capacity for synthesis, and his doors are open to all, whether to those in government or to those in opposition."

Ambongo, who was appointed Nov. 1 after nine months as Kinshasa coadjutor, previously headed Congo's Mbandaka-Bikoro Archdiocese after serving from 2004 to 2016 as bishop of Bokungu-Ikela and apostolic administrator of Kole.

Born the son of a rubber tapper in Boto Jan. 24, 1960, he took final vows as a Capuchin Franciscan in 1987 and was ordained in 1988 after studying moral theology in Rome. He later taught as a Catholic faculty professor in Kinshasa.

In 2016, he testified to the International Criminal Court in The Hague on local warlord activities, and he was an architect of a Dec. 31, 2016, church-brokered accord on elections to replace Kabila. He endorsed Catholic protests and condemned police violence when the accord was violated.

The Jeune Afrique weekly said Nov. 2 the appointment of "a man of the church who doesn't mince his words" to the "strategic post" of Kinshasa could be seen as "a message of firmness by the pope" toward the Congo's rulers.

La Prosperite daily said Ambongo appeared "aware of God's favor in his life," adding that he would "cling tenaciously" to the aim of ending the country's crisis in line with the "very rigorous" style of Monsengwo.

Preaching in the capital's Martyrs Stadium at his inaugural Mass, concelebrated by bishops from Congo and neighboring countries, Ambongo said God's kingdom was present wherever people -- "regardless of languages, tribes, nations, religions" -- were ready to "extend hands to draw back the frontiers of injustice, egotism and exploitation of the poor."

He added that he hoped clergy and faithful in Kinshasa would develop "a deep sense of belonging to a great diocesan family," without "discrimination as to origin, ethnicity, political opinion, and social and economic condition."

"Power is a service -- the humble service of others for accomplishing and realizing a complete society," the archbishop told the 70,000-strong congregation, who included Congolese Prime Minister Bruno Tshibala and senior government and parliamentary officials.

If everyone receives and practices the message of humility, "we can really transform our society and make Congo a finer place," the archbishop added.

Fr. Clement Makiobo, who studied with the archbishop, told France's Catholic La Croix daily that Ambongo had been "passionate about justice and law issues" as a young man, while also expressing "direct opposition" to the Mobutu Sese Seko, who ruled from 1965 to 1997.

"His appointment fulfills a life of commitment to human dignity, in a country where the church remains the only institution able to face up to power," Makiobo said.

The World Almanac lists 50 percent of Congo's more than 83.3 million people as Catholics. It has more Catholics than any other African nation.

With presidential elections scheduled Dec. 23, tensions are high. Kabila, who took office in January 2001, is expected to be defeated.