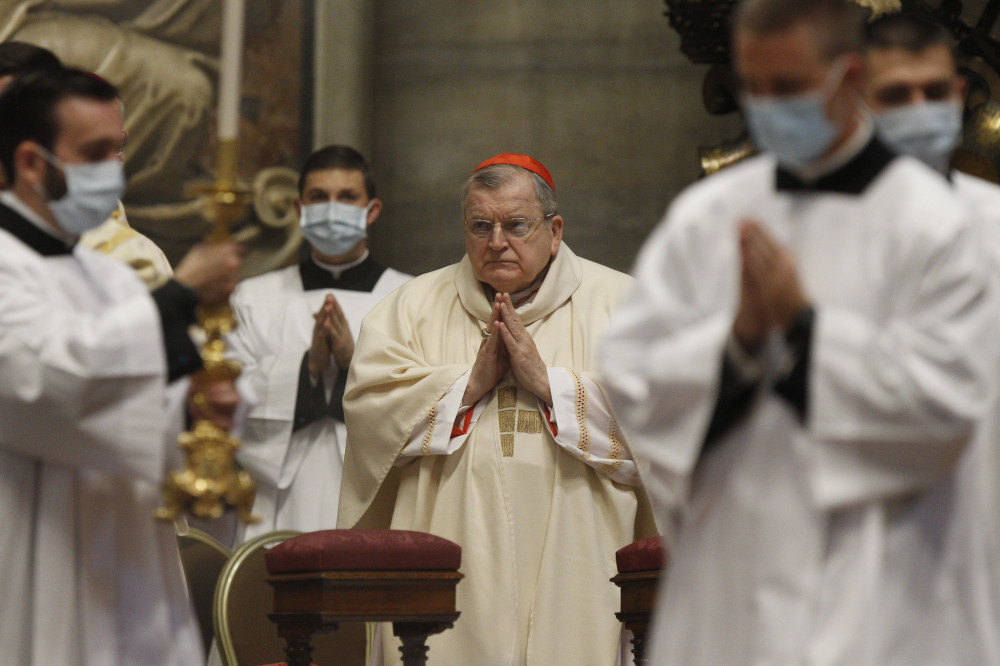 A message from the Twitter account of Cardinal Raymond Burke, a conservative prelate and outspoken skeptic of the COVID-19 vaccine, confirmed Aug. 14 that he had been placed on a ventilator after testing positive for the virus.

The tweet, apparently sent by Burke’s communication team, said the cardinal, 73, is being assisted by a ventilator at the hospital in Wisconsin, where he was a bishop from 1994 to 2005. "Doctors are encouraged by his progress," the Aug. 15 tweet stated, adding that Burke "faithfully prayed the Rosary for those suffering from the virus. On this Vigil of the Assumption, let us now pray the Rosary for him."

Aug. 15 marks the Feast of the Assumption, when Catholics celebrate the ascent of the Virgin Mary into heaven.

On Aug. 10, Burke had tweeted the news that he had tested positive but was "resting comfortably and receiving excellent medical care."

Burke can often be seen walking in Rome, where he lives, often maskless but always with his rosary in hand.

Born in Wisconsin, Burke served as bishop of the diocese of La Crosse from 1995 to 2004 and later became the archbishop of St. Louis. In 2008 he was summoned to Rome to act as prefect of the Vatican’s Apostolic Signatura, the highest judicial authority at the Vatican after the pope, until Pope Francis accepted his resignation in 2014.

Burke has occupied several influential positions at the Vatican, but has frequently clashed with Francis. In 2016, he signed a letter with other three prelates questioning the pope’s cautious opening for divorced and remarried couples to receive Communion following spiritual accompaniment expressed in his Apostolic exhortation Amoris Laetitia ("The Joy of Love").

More recently he challenged Francis' Traditionis Custodes, which placed remiposed earlier restrictions on the celebration of the pre-Vatican II Latin Mass. Burke described it as "marked by harshness."

It is unclear whether Burke has received the vaccine, but speaking at the May 2020 Rome Life Forum, Burke said that "vaccination itself cannot be imposed, in a totalitarian manner, on citizens." He also quoted groups that suggested that COVID-19 vaccines inject "a kind of microchip" that allow citizens to "be controlled by the state regarding health and about other matters which we can only imagine."

The cardinal also said that "it is never morally justified to develop a vaccine through the use of the cell lines of aborted fetuses," adding that the state "is not the ultimate provider of health. God is."