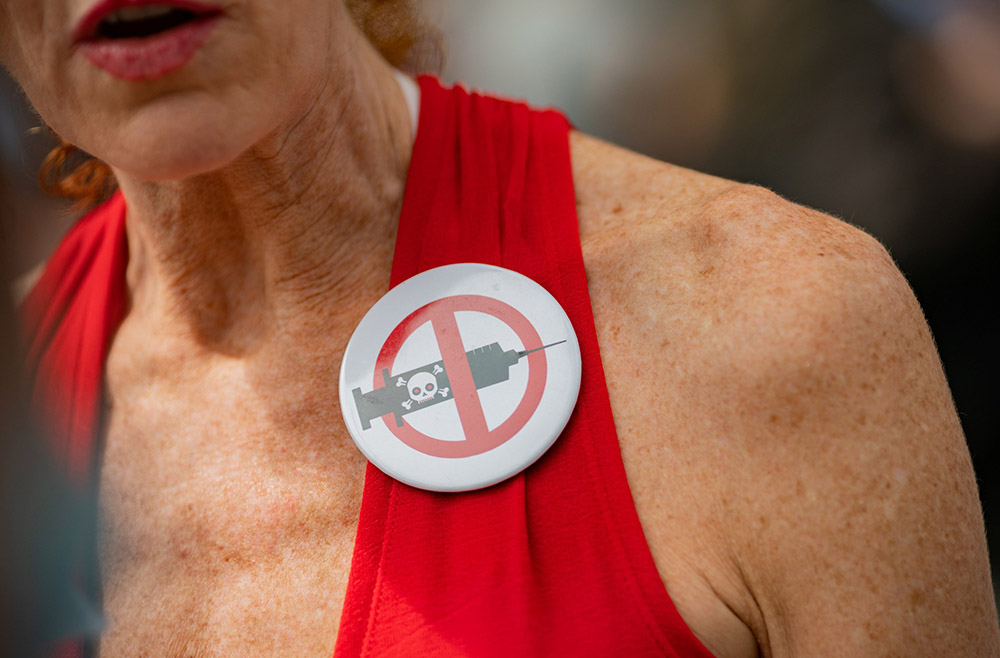 A woman outside New York City Hall in Manhattan is seen during a protest against mandating COVID-19 vaccines Aug. 16. (CNS/Reuters/Jeenah Moon)

Texas Gov. Greg Abbott apparently wants to make a suicide pact with the people of the state he leads. Only about 52% of Texans have been fully vaccinated, compared to 60% of Californians and 65% of New Yorkers. So harping on people's right to not get vaccinated is hardly the kind of action you would want from a self-described pro-life governor.

Some of the state's largest employers, such as Southwest and American Airlines, have indicated they intend to ignore the governor's edict banning vaccines mandates in the state. The interstate commerce clause probably protects them from his wrath, but that clause is of no help to other businesses in the state.

The governor's decision came days after his primary challenger, former Florida Congressman Allen West, tweeted: "As Governor of Texas, I will vehemently crush anyone forcing vaccine mandates in the Lone Star State. There are far better protocols that individual citizens can utilize and decide for themselves." Another tweet read: "Our bodies are our last sanctuary of liberty and freedom, I will defend that for everyone, even the progressive socialist jackasses who must be saved from themselves."

West was tweeting from a hospital in Plano, Texas, where he was being treated for COVID-19. He called the vaccine "dangerous" and said that he was concerned about "enriching Big Pharma." He praised the monoclonal antibody treatment he is receiving in the hospital, which costs $2,100 per dose compared to $19.50 for a dose of the Pfizer vaccine. How much do you want to bet West runs on the promise of lowering the cost of government?

The ban is a tad ironic because back in 2012, when Abbott was the state's attorney general, he sued the federal government, arguing that the contraception mandate enacted during the implementation of the Affordable Care Act "tramples the religious liberty of Catholics in particular." He said that the Affordable Care Act as a whole was unconstitutional because of the individual mandate that everyone purchase insurance or pay a fee.

The strange vaccine phobia that has taken hold of the GOP base is also affecting religious folk. EWTN News Nightly on Oct. 11 featured an interview with Joseph Meaney, the president of the National Catholic Bioethics Center. Whatever expertise Meaney may have about bioethics, he doesn't have any about journalistic ethics, relying on a report from the poorly named Veritas Project, which conducts undercover operations to advance its ideological agenda.

In this case, Meaney took what sounded like a PR memo and tried to invest it with moral significance. To what end? To justify the vaccine skepticism he has been peddling for months now. The National Catholic Bioethics Center mistakes moral scrupulosity for moral seriousness, with the effect of sowing confusion among the faithful. It has become an arm of the Republican Party more than a resource for the nation's bishops.

Archbishop Timothy Broglio, who heads the archdiocese of the U.S. military, made some headlines this week when he issued a statement affirming that Catholic members of the military can claim a conscientious religious exemption from the government mandate that they get vaccinated. His statement is very precise, and he nowhere contradicts the teaching of the church, specifically the teaching that a person must follow his or her conscience, even if it is erroneously formed. That teaching never seemed to come up when discussing, say, Humanae Vitae, but that is a different topic for another time.

After recognizing that the Holy See and the U.S. bishops have both affirmed the use of any of the vaccines available, Broglio stated:

This circumstance [of members of the military asking if they could receive an exemption] raises the question of whether the vaccine's moral permissibility precludes an individual from forming a sincerely held religious belief that receiving the vaccine would violate his conscience. It does not.

Which religion is that, archbishop? The idea that the vaccines are tainted because they were tested using a stem cell line derived from an abortion, and in the case of the Johnson & Johnson vaccine, that stem cell line was used in the production of the vaccine, is not a Catholic idea.

By giving such fulsome treatment of the abortion-related concerns, while going no further than saying the vaccines are morally "permissible," Broglio is also sowing confusion. A pastor's job is only partly to communicate theology. It is also to assess the circumstances of his congregation and help them to apply that theology.

I would instruct a child not to speak with strangers on the way home from school, but if there is an out-of-control car speeding toward a stranger, I would hope my child would speak to the pedestrian and warn him to get out of the way. The pandemic is an out-of-control car and this fixation on the moral permissibility of speaking to the stranger is wrongheaded. It is also, profoundly and obviously, not pro-life.

Human life entails confusion, to be sure. And because our scientists and medical researchers are learning new information about the virus all the time, the consequent public health information will be changing. The debate about boosters, and who needs them, made its way into the public domain, for example, leaving many perplexed about who needs a booster and why.

In this environment, pastors are well-advised to focus not on misplaced moral scruples but on the moral urgency of getting as many people vaccinated as possible.