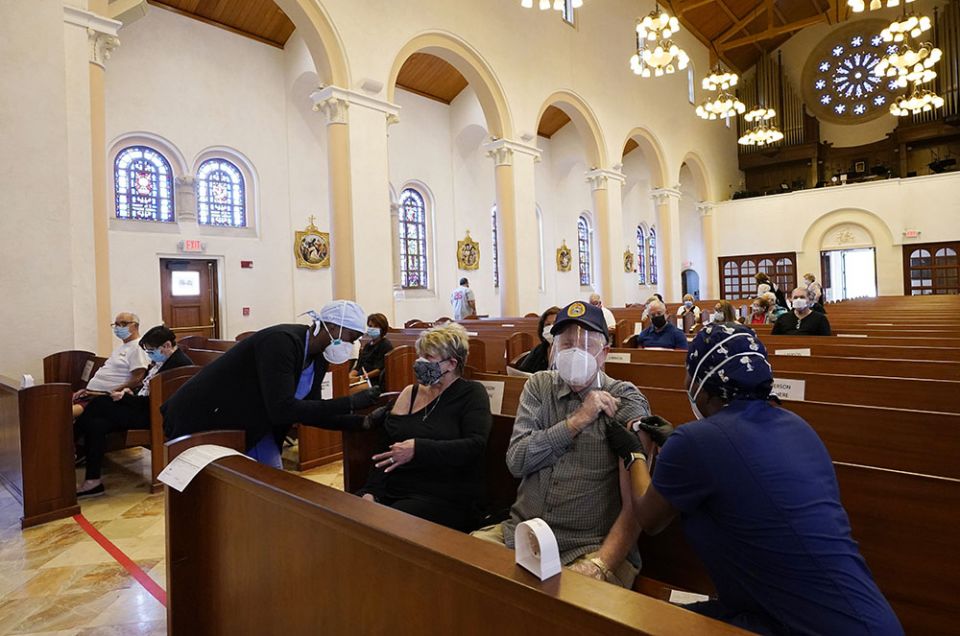 A new survey finds vaccine hesitancy has fallen among Americans overall and among all religious subgroups in just three months, with many who once balked saying they embraced inoculation against COVID-19 at the urging of faith leaders.

Many stalwart subsets of "vaccine refusers," however, have barely budged, raising concerns as to whether they will ever get the shots. 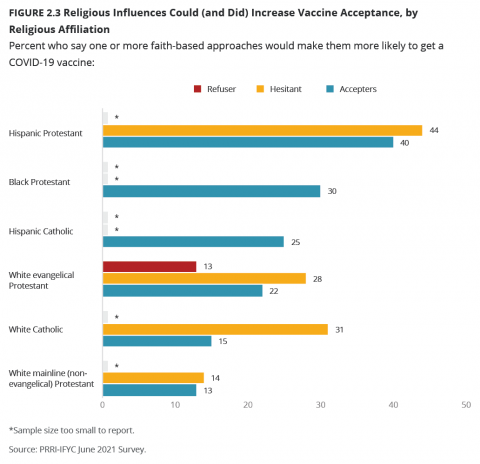 The findings were released July 28 as a collaborative survey conducted by the Public Religion Research Institute and the Interfaith Youth Core. Researchers framed it as an update to a similar poll conducted in March that highlighted sizable percentages of Americans at the time who exhibited vaccine hesitancy, which PRRI and IFYC define as people who say they will either "wait and see" before getting a vaccine or who will only get it if required.

Researchers noted the number of vaccine hesitant Americans has shrunk significantly overall, dropping from 28% in March to just 15% in June, when PRRI/IFYC conducted their second survey.

The trend holds true for religious Americans as well. In March, Hispanic Protestants exhibited the highest rate of vaccine hesitancy at 42%. But the group has undergone a marked shift between March and June: Only 26% now report vaccine hesitancy, and overall vaccine acceptance jumped from 43% to 56%.

Black Protestants are among those who have seen a marked increase in vaccine acceptors, rising from 49% to 66%. Vaccine hesitancy with the group also declined, dropping from 32% to 21%.

The upward trend was less pronounced among white evangelicals, although there was a notable shift: Vaccine acceptors in the group increased from 45% to 56%.

Researchers highlighted the importance of faith-based overtures when it came to getting religious people vaccinated, particularly within communities of color. Among those who are now vaccinated, Hispanic Protestants (40%) and Black Protestants (30%) were especially likely to say that one or more faith-based approaches — such as forums on vaccine use convened by a local religious community or encouragement from a faith leader — helped convince them to get vaccinated.

Worship attendance also had an effect. Among those who attend religious services and are vaccinated, most Hispanic Protestants (54%) and a sizable percentage of Black Protestants (42%) said faith-based overtures helped them embrace inoculation against the novel coronavirus. Among vaccinated Hispanic Catholics overall, 25% credited faith-based influences, a percentage that leaps to 45% among those who attend services.

As for those who remain vaccine hesitant, some groups show an increased willingness to heed faith-based encouragement. For example, white Catholics are now twice as likely to say they could be nudged into getting a vaccine via religious methods (31%) than earlier this year (15%).

Indeed, the shifts come in the wake of several efforts by religious communities to encourage vaccination among the faithful. Campaigns sometimes operated in collaboration with government officials: In Washington, D.C., several historically Black churches served as staging locations for vaccine drives, with leaders reaching out to parishioners and vaccinating clergy in public.

Several faith groups have also partnered with the White House to encourage "movable" demographics to get vaccinated, and religious leaders from an array of traditions — Hindu, Hispanic Protestant, Catholic and more — have canvassed their communities and hosted vaccination drives as part of a multifaith "Faith 4 vaccines" initiative.

What's more, the PRRI/IFYC poll was conducted prior to an escalation in pro-vaccine rhetoric among Republican officials in recent weeks. Some have appealed to faith: In a recent editorial, former Trump administration press secretary and current Arkansas gubernatorial candidate Sarah Huckabee Sanders, an evangelical Christian, implored people in her state to get the "Trump vaccine," encouraging them to "Pray about it, discuss it with your family and your doctor."

According to PRRI-IFYC, rates of vaccine acceptance were increasing even before the renewed push, rising from 45% in March to 64% in June. Rates among Democrats rose from 73% to 85% in that same time period.

But as vaccine acceptance rises and hesitancy continues to shrink, the number of vaccine refusers — people who say they will not get a COVID-19 vaccine — has changed little. The group now represents 13% of the U.S. population overall, a drop of just 1 percentage point since March.

Again, religious groups largely mimic national trends. For example, the number of religiously unaffiliated vaccine refusers did not change at all, holding steady at 12%. The same is true for white Catholics (8%). 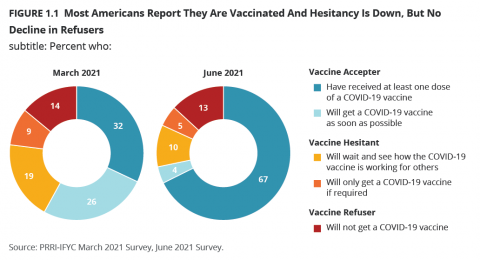 The percentage of vaccine refusers hovered around the same as March for Hispanic Protestants (from 15% to 17%), non-Christians (10% to 13%) and among members of the Church of Jesus Christ of Latter-day Saints (17% to 19%).

Jewish Americans also saw their vaccine refuser group grow (5% to 7%), although the community continues to exhibit the highest rate of vaccine acceptance overall (85%).

White evangelical Protestants remain the religious group with the highest percentage of vaccine refusers with 24% (compared to 26% in March).

And while hesitancy declined overall among white evangelicals, those who are left now appear generally less likely to respond to religious appeals. In March, 38% of those in the group's vaccine hesitant cadre said faith-rooted overtures could compel them to get vaccinated, but that shrunk to 28% in June. The same pattern can be found among their vaccine refusers: 47% said religious approaches could change their mind in March, but only 32% say the same now.

There was, however, an increase in susceptibility among vaccine refusers who attend religious services, with 17% now saying they could be impacted by religious approaches compared with 7% in March.

Weak response from some US bishops as priests spread vaccine misinformation