by Christopher White
Politics
This article appears in the Election 2020 feature series. View the full series. 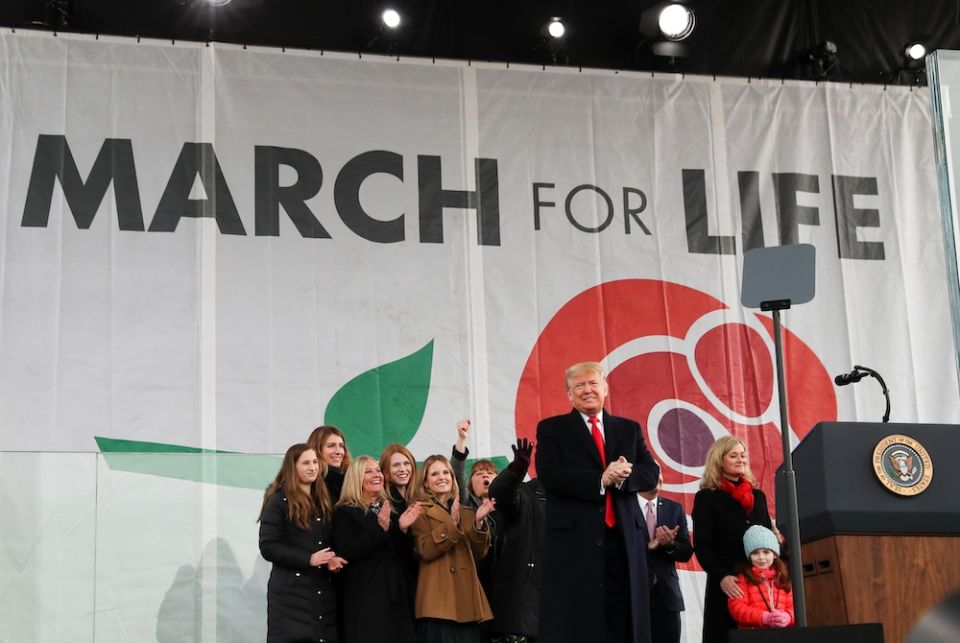 U.S. President Donald Trump applauds after addressing thousands of pro-life supporters during the 47th annual March for Life in Washington Jan. 24, 2020, the time a sitting president addressed the event in person. (CNS/Reuters/Leah Millis)

Editors note: This is Part 1 of a two-part series focusing on Catholic groups' involvement in the presidential campaigns. Today's story focuses on four groups that support the reelection of President Donald Trump. Part 2 explores four groups that are against Trump's reelection.

Cardinal Timothy Dolan of New York opened the Republican convention in prayer invoking God's wisdom "upon an electorate so eager to perform its duty of faithful citizenship," and President Donald Trump said, "In America, we don't turn to government to restore our souls. We put our faith in almighty God."

Yet beyond the formalities of prayer, in the trenches Catholics of both political parties are actively scrambling to secure "the Catholic vote."

Other efforts have included "Theology sessions" aimed to help get out the vote led by former White House advisors.

Many of the most notable efforts to help reelect Trump are, in fact, led by individuals who once declared him unfit for office and questioned his pro-life credentials. Today, they're fundraising and spending millions of dollars trying to ensure he's reelected through a range of political action committees, super PACS and more. Many of them, in fact, were in the audience at the White House on the final night of the convention when the president formally accepted the Republican party's nomination for reelection.

Below is an NCR snapshot of some of the most notable Catholic-led groups and organizations ensuring that the man who recently described himself as the "best president in the history of the [Catholic] Church" gets four more years. 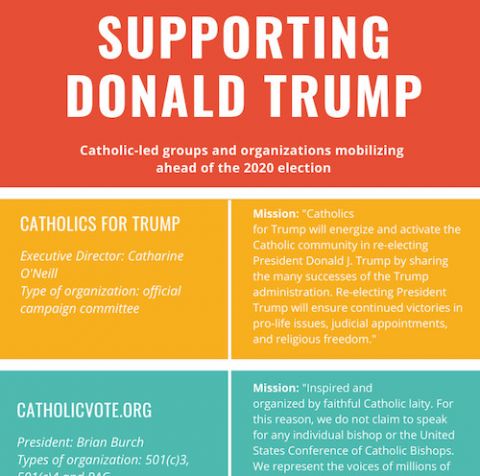 Trump's reelection campaign kicked off its outreach to Catholic voters in April 2020 with an online event featuring Fr. Frank Pavone, the founder of Priests for Life who is known for his controversial and often inflammatory rhetoric and tactics, including celebrating a Mass with the remains of an aborted fetus on the altar. The event spotlighted abortion and religious liberty as two issues of paramount concern to Catholics, with former Kansas GOP Rep. Tim Huelskamp telling attendees that "you've got a non-Catholic in Donald Trump who's delivering on Catholic social teaching and principles."

At the helm of the group is Catherine O'Neill, who has worked in the State Department and is the daughter of major Trump donor George O'Neill Jr. who helped connect Russian spy Maria Butina to prominent Republican leaders, including at events surrounding the National Prayer Breakfast.

The official launch of Catholics for Trump had previously been scheduled on March 19 in Wisconsin. Although the in-person rally, in which Trump was expected to appear, was cancelled due to the pandemic, Milwaukee's archbishop issued a statement saying that "the event is not hosted by the Catholic Church nor the Archdiocese of Milwaukee, the local church of southeastern Wisconsin" and clarified that "the Catholic Church and the Archdiocese of Milwaukee are not endorsing the rally and are in no way affiliated to or sponsoring this event or campaign locally, statewide, or nationally."

In August, the group hosted "Catholics for Trump Theology Thursday with Dr. Sebastian Gorka," the former White House aid known for his strong anti-immigrant views and nationalistic policies. Among the featured items on their website is the letter penned to Trump by Archbishop Carlo Maria Viganò, the discredited former papal nuncio to the U.S. who has previously called for Pope Francis' resignation and is widely heralded by many right-wing Catholics as leading the resistance to Francis' papacy.

Mission: "Inspired and organized by faithful Catholic laity. For this reason, we do not claim to speak for any individual bishop or the United States Conference of Catholic Bishops. We represent the voices of millions of Catholics across America who seek to renew our country and our culture, in full communion with and 100% faithful to the Magisterium of the Catholic Church."

CatholicVote.org is the offspring of the now defunct Catholic Alliance organization (which was an outgrowth of Christian Coalition in 1995).

As NCR has previously reported, the organization has utilized geofencing technology to capture information from Mass-goers, using their cell phone location, and then purchase ads targeting them. In 2016, CatholicVote.org President Brian Burch was among the signatories of a manifesto penned by conservative Catholics against Trump published in National Review labeling then-candidate Trump as "manifestly unfit to be president of the United States."

Text from an email from CatholicVote.org (NCR screenshot)

Yet by October 2016, Burch was boasting that Trump had sent CatholicVote.org a personalized letter with the guarantee that he would protect religious freedom if elected, leading Burch to tell EWTN that he believed Trump "takes the issues and concerns of Catholics very seriously."

CatholicVote.org is a project of the Fidelis Center for Law and Policy, founded by Burch in 2005 with a mission to "educate and defend the constitutional rights of citizens, specifically related to life, faith and family. The Center seeks to faithfully promote Catholic Social Doctrine in American civic life through education, litigation, and related activities."

The operation is divided into a legal fund, an education fund, and a political action committee (PAC) that contributes money directly to candidates. In the most recently available tax filings from 2018, Burch was paid an annual salary of $167,306 and Fidelis took in $3.2 million in revenue.

Throughout the summer of 2020, the organization has sent out mailers warning that "There is a war on Catholics and Faith in God," and asking participants to complete a survey of Catholic opinions with the promise that results would be shared with Trump and other national leaders.

Among the survey questions, participants were asked: "Do you agree with Catholic Vote that if the anti-Christian Left sweeps to power on November 3rd, they will continue to use the power of government to eliminate every last trace of Christian influence from American public life?"

Mission: "To end abortion by electing national leaders and advocating for laws that save lives, with a special calling to promote pro-life women leaders."

Originally founded as a pro-life counterpoint to the abortion rights group Emily's List, the Susan B. Anthony List (SBA List) was founded by Rachel MacNair with the aim of electing women to Congress who would oppose abortion. Although MacNair's original intention was to build a bipartisan coalition, the organization now backs pro-life men and has worked to unseat pro-life Democrats. MacNair, who holds a consistent ethic of life that includes opposition to abortion, has since characterized her founding of the organization as "Much to my embarrassment."

Under the leadership of its current president, Marjorie Jones Dannenfelser, a convert to Catholicism who in September 2016 took on the role as leader of Trump's Pro-Life Coalition and in the 2020 election is serving as co-chair of the campaign's "Pro-Life Voices for Trump" coalition, the SBA List has a "family" of six different operations: the Susan B. Anthony List Candidate Fund; the Susan B. Anthony List Action PAC; the Women Speak Out PAC; the National Pro-Life Women's Caucus; the Life Issues Institute; and the Charlotte Lozier Institute.

In 2017, Vice President Mike Pence headlined the organization's annual gala, and in 2018, Trump delivered the keynote address where he told attendees, "When I ran for office, I pledged to stand for life, and as president, and as president, that's exactly what I've done." Despite originally opposing Trump in the 2016 Republican primary and signing a letter headlined "Pro-life Women Sound the Alarm: Donald Trump in Unacceptable," Dannenfelser introduced Trump at the 2018 SBA List Campaign for Life Gala by labeling him as "the most pro-life president in history."

The homepage of the organization boasts of the "The Most Pro-Life RNC in History," in regard to last month's Republican National Convention, and the website notes that in the last three election cycles, SBA List has achieved 5.3 million voter contacts, visited 4,362,099  voters at their homes, distributed 3.9 million pieces of campaign literature, made 928,423 "live phone calls, and reached 1.8 million voters online; the site also keeps a log of "President Trump's Pro-Life Wins."

Pence recently spoke at the book tour of Dannenfelser's recently released book titled Life is Winning, which he penned the introduction for. SBA List and its related entities have committed to spending $52 million to re-elect Trump and Republicans in the U.S. Senate. 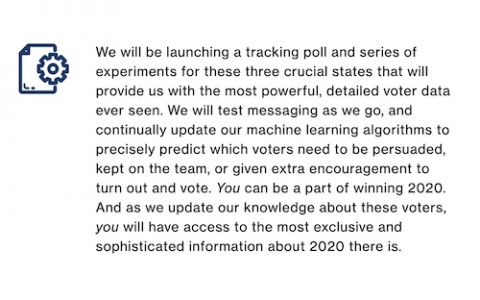 From the Valor America website, "Our Plan for 2020" page (NCR screenshot)

The group's origins trace back to 2014 when the organization pioneered new pro-life messaging to Hispanics who traditionally voted Democratic. In the 2020 election, Valor America is focusing on Midwestern swing states, warning on their website "If President Trump keeps the states he won in 2016, but loses Pennsylvania (won by +1.2 points), Michigan (won by +0.3 points), and Wisconsin (won by +1 points), we lose. If Trump wins just one of those states, we win."

Valor America is led by Joseph Arlinghaus, a longtime Catholic pro-life activist, who has praised Trump, writing that "I personally adore his belligerence and tenacity," and encouraging other Republican leaders to spend time listening to the concerns of voters and not just the donor class.

The organization has received the endorsement of Janet Smith, a former professor at Sacred Heart Major Seminary in Detroit, Michigan, who in recent years has been a vocal critic of Francis. Smith has sent fundraising letters on Valor America's behalf.

"Currently I am working very hard on dealing with the sexual abuse crisis in the Catholic Church; an effort that is not unrelated to the huge challenges we have in our country. … You don't need to be a political scientist to see that should the Democrats win, our culture will be even further along on the road to abandoning all traditional morality and probably embracing socialism," writes Smith.

* Editor's note: A sentence that was misattributed has been removed.

Related: Four Catholic-led groups working against President Donald Trump's reelection
A version of this story appeared in the Oct 2-15, 2020 print issue under the headline: Seeking the Catholic vote .