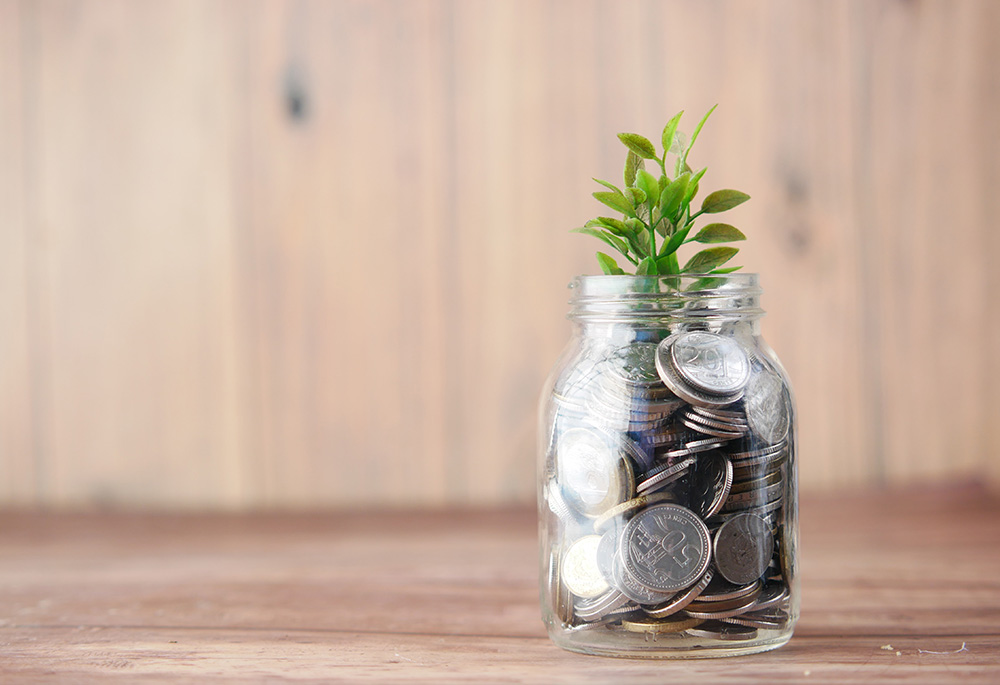 Increasingly, Jesuits in Canada are thinking about the boreal forest.

Covering 60% of the country, the vast biome is the largest intact forest in the world. It also plays a critical role in global efforts to address climate change, not just as a major carbon sink but through the increasingly valuable minerals underneath it that are key components for electric vehicles and batteries at the heart of a shift to renewable energy.

But how and where that mining occurs in Canada's boreal zone will have major ramifications for the nation's Indigenous communities, who make up the vast majority of the region's population. For the Jesuits, the scenario presents a call to collaborate with First Nations peoples to protect the forest as part of Catholic teaching on caring for creation.

Not just with words or actions but with their investments, too.

"I think our investment policy is going to have to become an instrument of this goal for living sustainably in the boreal forest. And our investment policy will have to be a tool of relationship-building in addition to raising funds in a just way for our operations," said Jesuit Fr. Peter Bisson, a past provincial of the English Canada province of the Society of Jesus and now an assistant for justice, ecology and Indigenous relations.

Financing's role in the causes and solutions to climate change was put under the spotlight during two Vatican-sponsored events as part of this year's Laudato Si' Week celebrations of Pope Francis' 2015 encyclical, "Laudato Si', on Care for Our Common Home."

"We think ecological economics is fundamental," said Salesian Fr. Joshtrom Kureethadam, referring to one of the seven thematic goals under the Vatican's Laudato Si' Action Platform, an initiative inviting Catholic institutions to act upon the pope's messages of integral ecology and ecological conversion.

Each day during Laudato Si' Week 2022 has highlighted one of those goals. On Thursday, a hybrid in-person and virtual event, hosted by the Dominican Sisters' An Tairseach Ecological Retreat Centre in Ireland, brought together Catholic sisters, priests and laypeople to talk about the ways they have already sought to wield financial assets for the good of the planet and next steps to do even more.

Cabrini Sr. Barbara Staley, general superior of the Missionary Sisters of the Sacred Heart of Jesus, said one of the biggest challenges her order faced was finding portfolio managers who understood the congregation's values and investment goals.

"They would tell me about how they were growing our principal. And I kept telling them I'm not worried about growing our principal," she said, explaining their current return rates were enough to sustain the order's future. "I want us to be able to use these goods on behalf of something else. And they really didn't understand that."

Related: For Catholic sisters, eco-missionary activity isn't trendy. It's integral to their work.

That financial security afforded the Charity sisters to take a lower return, and to take risks by investing in companies doing promising work to address climate change and other environmental challenges where others may not be willing.

"The church teaches very clearly that any of the goods that we have are for the people of God and that we are stewards of that. And so we decided, how is it that we can use those temporal goods on behalf of mission, not just as a mechanism for supporting our missions?" Staley said.

Bisson said it was important for religious institutions to allow their faith values to lead their financial decisions and not the other way around. He said the relationship-building aspect of a portfolio comes through collaborating with other organizations in funding environmentally friendly companies, monitoring potentially harmful practices and promoting new ways to think about the economy overall.

Loretto Sr. Pauline Macharia of Kenya said that as her communities have begun to implement the Laudato Si' Action Platform, they are asking more questions about their investments, such as were goods and services ethically made and handled throughout the supply chain, and are they of benefit not just to consumers but also to the people who produce them. The communities have also sought to use their investment portfolio for advocacy, including combating modern slavery in Canada and exploitative mining practices in Australia. 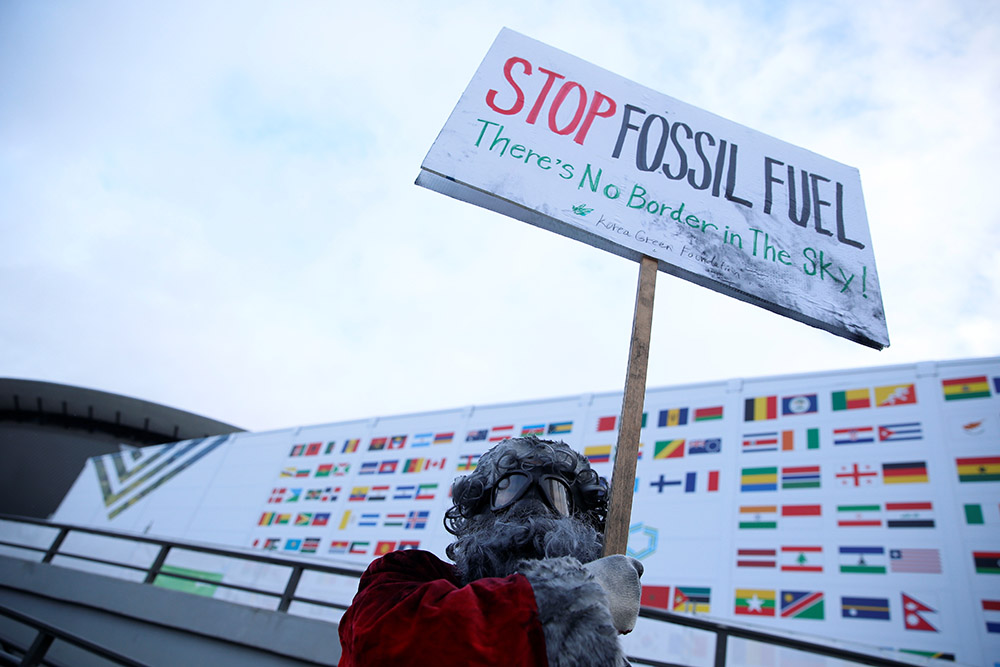 "Our economy must be ethical. And we are hoping that we continue to promote ways that make our world better," Macharia said.

The Thursday event included an announcement about the development of a Living Laudato Si' online investment hub by the U.K.-based finance and environment organization FaithInvest, in partnership with the Laudato Si' Movement. The hub aims to help Catholic institutions put into practice faith-based ecological economics and will offer reflection guides and resources from groups like the Catholic Impact Investing Collaborative and the Interfaith Center for Corporate Responsibility. An investing workshop is planned for October.

For the Cabrini Sisters, impact investing has allowed them to have a wider footprint in the world, even as their numbers decline. While their sisters are physically present in 17 countries, their investments in various projects have extended their ministry outreach to 54 countries, Staley said.

Divestment from fossil fuels and other harmful activities to the Earth also played a large part in conversations during Laudato Si' Week events.

Kureethadam repeated a message he delivered last year during Laudato Si' Week that the Catholic faith tradition calls for divestment "from all activities harmful to the planet and the people." He referenced a protest held in Uganda May 22 against the East African Crude Oil Pipeline (EACOP), which opponents say threatens the local ecosystem and Indigenous communities.

The Laudato Si' Week events on both Wednesday and Thursday offered guides and resources on how faith-based communities can divest from fossil fuels. The Laudato Si' Movement, which has promoted divestment in the church, will have its next joint announcement on July 6.

The conversations played out as annual shareholder meetings took place at major oil companies, including ExxonMobil, Total and Chevron. Shareholder resolutions garnered majority support at Exxon, to assess its climate transition risk, and at Chevron to reassess its total methane emissions.

How financing of fossil fuel projects fuels violence and conflict in the world was explored in greater depth during a panel discussion in the Wednesday event, with speakers addressing the war in Ukraine, the failed effort to stop the Enbridge Line 3 pipeline in northern Minnesota and the EACOP project, which would be the world's longest heated crude oil pipeline stretching 1,443 kilometers across Uganda and Tanzania.

Omar Elmawi, an environmental lawyer and coordinator of 350.org's stopEACOP campaign, said that EACOP would likely displace tens of thousands of people and impact far more by inhibiting access to land that has supported their livelihoods, whether through farming, tourism or other ways.

The pipeline also poses a threat to the Lake Victoria basin, a vital source of freshwater and food for upward of 14 million people. In addition, EACOP's planned path passes across 200-plus rivers and 400 villages, and the project at full capacity would transport up to 400,000 barrels of oil each day, which would be shipped out of Africa to overseas markets.

"It's taking us many, many steps back as far as our journey to try and stop fossil fuel extraction and also curbing the climate crisis," Elmawi said. 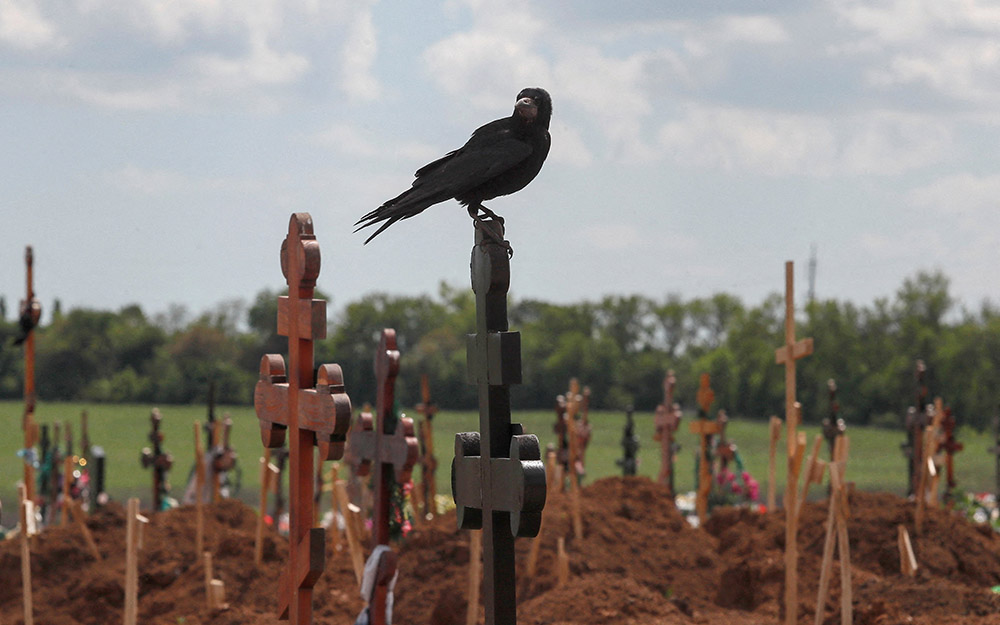 A bird sits on a cross amid newly made graves at a cemetery near Mariupol, Ukraine, May 15, during the Ukraine-Russia conflict. (CNS/Reuters/Alexander Ermochenko)

Meanwhile, fossil fuels have propped up the Russian invasion of Ukraine, said Svitlana Romanko, the former zero fossil fuels campaign manager for Laudato Si' Movement who recently took a sabbatical from that post to focus on solidarity campaigns for her home country of Ukraine.

"Without revenues from oil and gas, Russia's war machine would not be able to function," she said.

She urged divestment from fossil fuels as a means to blunt the power of authoritarian dictators and joined calls for the European Union to implement a full embargo of fossil fuels from Russia. Along with that, she encouraged Catholic organizations to endorse the Fossil Fuel Non-Proliferation Treaty, a move 11 Catholic institutions have already made along with numerous other faith-based groups.

"If you won't stand for justice, for ending fossil fuels everywhere, this won't be the last war unfortunately, I'm afraid," Romanko said.

In opening remarks, economist Jeffrey Sachs placed ending the war as the globe's foremost objective, as it has drained focus and finances from other pressing objectives: ending the COVID-19 pandemic and achieving the United Nations 17 Sustainable Development Goals — what he called "the closest we come to a global framework for decency on the planet" — and the goals for addressing climate change under the Paris Agreement.

"Without cooperation and diplomacy, we can't solve any other problems," he said.

Sachs, director of the Center for Sustainable Development at Columbia University and member of the Pontifical Academy of Social Sciences, said that the world only stands to become more dangerous as temperatures continue to rise, and with it drive more heat waves, droughts, disease and displacement of people. He added that Francis' encyclical Fratelli Tutti offers important lessons about interdependence and the need for communities and countries to cooperate, rather than combat, in pursuit of shared common interests.

"Stop the war. Start the solutions for sustainable development and for decarbonization, for the massive buildup of renewable energy. And do it cooperatively," he said.

In his concluding remarks, Sachs quoted a speech from President John F. Kennedy in June 1963, months after he navigated the Cuban Missile Crisis with the Soviet Union to a peaceful resolution.

"If we cannot end now our differences, at least we can help make the world safe for diversity. For, in the final analysis, our most basic common link is that we all inhabit this small planet. We all breathe the same air. We all cherish our children's future. And we are all mortal."

Editor's Note: This article has been updated to correct the current title of Jesuit Fr. Peter Bisson.