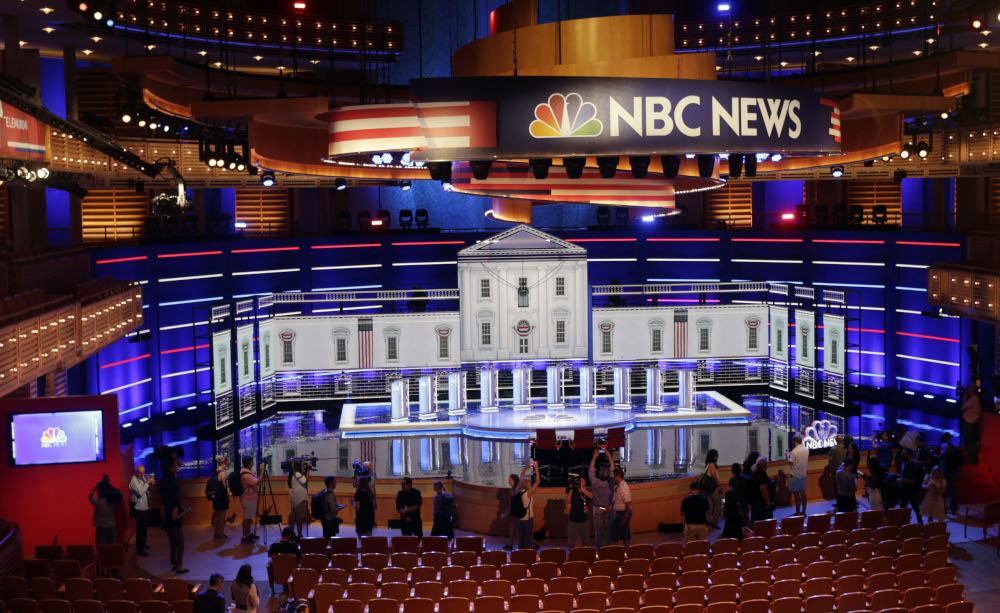 Members of the media gather for a walk-through of the stage set-up for the first Democratic debate on June 26, 2019. Ten presidential candidates, led by Sen. Elizabeth Warren, are set to converge on the debate stage on the first night of Democratic debates to offer their pitches to the American people and attempt a breakout moment for their campaigns. (AP/Marta Lavandier)

Democratic presidential candidates have talked a lot about God this year, but are they willing to debate the divine?

In years past, the prospect of Democratic candidates discussing faith in the course of a presidential debate would be far-fetched. But the 2020 campaign season has already produced an atypical amount of God-talk on the campaign trail, and the first Democratic presidential debate June 26 on MSNBC has the potential of breaking into an open competition for religious voters.

They represent perhaps the most eclectic group of faith backgrounds in presidential campaign history, with a Hindu (Gabbard), a Mexican American Catholic (Castro) and, in Booker, someone who grew up in the black church.

But it is tonight’s candidates’ volubility about faith matters that makes the first debate likely to get interesting if religion comes up. Here are a few ways that it might:

The candidate mostly likely to initiate a spiritual conversation is probably Booker, who has a long history of weaving spiritual language into his speeches and political rhetoric. He has infused his presidential campaign with a message rooted in love and "civic grace."

He even made a Bible reference during his speech before the South Carolina Democratic Party last week, when he invoked the Book of Genesis, citing a passage where people discuss killing the "dreamer." 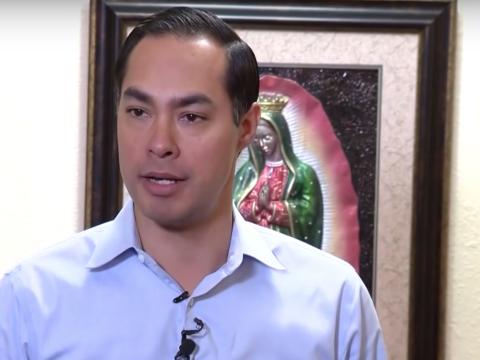 Julián Castro announced he was forming an exploratory committee on Dec. 12, 2018. (Video screenshot)

"This is a referendum on the dream!" Booker, who attends a Baptist church in New Jersey, shouted over cheers from the crowd in reference to the 2020 election. "If we dream together, and work together, and love together, we will not just beat Donald Trump, but we will make it to the mountaintop, and we will get to the promised land!"

If Booker does initiate the God-talk, Warren, who also has a history of talking about religion in public, may jump in as well. The two senators have gone head-to-head on faith before: Last year, she and Booker addressed a preacher’s conference in Washington, D.C.

Warren’s religious rhetoric is often more activist-minded than Booker’s and she may use that as a way to strike a contrast between them. Whereas Booker tends to emphasize faith as a way to spur compassion and build bridges, Warren often invokes religion as a driving force behind her progressive policies.

When asked about her faith during a CNN town hall in March, Warren, a Methodist, cited a passage from the Gospel of Matthew in which Jesus tells the parable of a shepherd separating sheep and goats as a metaphor for God deciding who is granted eternal life (she technically flubbed the reference: She said Matthew 26 instead of Matthew 25, although she has cited it correctly in the past).

Warren paid special attention to the lines in the passage that mandate performing good acts — such as feeding the hungry, giving water to the thirsty and welcoming the stranger. She then pivoted into a full-on exegesis, saying she drew two conclusions from the passage.

The line between activism and compassion can sometimes be blurry, but if God comes up, look for Booker and Warren to emphasize different theological paths.

Castro: Faith on the border

Castro, who trails Booker and Warren in most polls, is hardly a novice when it comes to spiritual matters. He repeatedly shared stories of his family’s Catholic faith during his 2012 Democratic National Convention speech, and he has conducted multiple interviews about religion since announcing his run.

"I see progressive values and progressive vision as completely in line with the teachings of Jesus Christ and of other religious figures that people believe in — basic kindness and compassion and respect for others and doing something for people other than yourself," Castro told Religion News Service columnist Simran Jeet Singh in a recent interview. "All of these things that we champion as progressives are consistent with the teachings of Jesus and many other religious figures."

Castro may not take a Booker-Warren set-to as his opportunity to invoke his faith, but instead deploy it while discussing immigration — the issue he has championed as a core component of his presidential campaign. The former mayor of San Antonio produced an exhaustive immigration planearly in the race and has invoked faith as a way to contrast his perspective on the issue from that of President Trump.

"In the Catholic faith and many other faiths — and even people who do not subscribe to a faith — I’ve always seen a common denominator (that includes Catholicism) of ‘I’m treating everyone humanely,’" he told RNS earlier this year. "There’s no better example of where we’ve gone astray than the family separation policy that this administration ramped up last year or over the last couple of years."

Klobuchar on faith and addiction

Klobuchar has both drawn attention to her sometimes difficult upbringing and to her faith in relation to drug and alcohol addiction.

Earlier this year, the senator proposed a $100 billion plan to combat drug and alcohol addiction and improve mental health care across the United States. Klobuchar has often noted that her interest in the issue is personal: Her father struggled with alcoholism.

She has said the painful part of her past is also wrapped up in religion. A member of the United Church of Christ and a regular attendee at the Senate Prayer Breakfast, she told a voter at a CNN town hall this spring that faith is what helped her get through her father’s addiction, and she separately told The New York Times that when her father "finally got real treatment" he "was, in his own words, ‘pursued by grace.’"

Gabbard: Religion is bigger than Christianity

As the lone non-Christian on the stage and one who hails from a religiously diverse state, Gabbard may position herself as a break from the norm.

For Gabbard, the first Hindu member of Congress, faith has been a complicated element of her public persona. Shortly after she announced her presidential campaign, she was criticized by some for alleged ties to religiously based anti-LGBTQ groups and anti-Muslim Hindu nationalists.

Gabbard rejected such claims and accused her detractors of "religious bigotry." 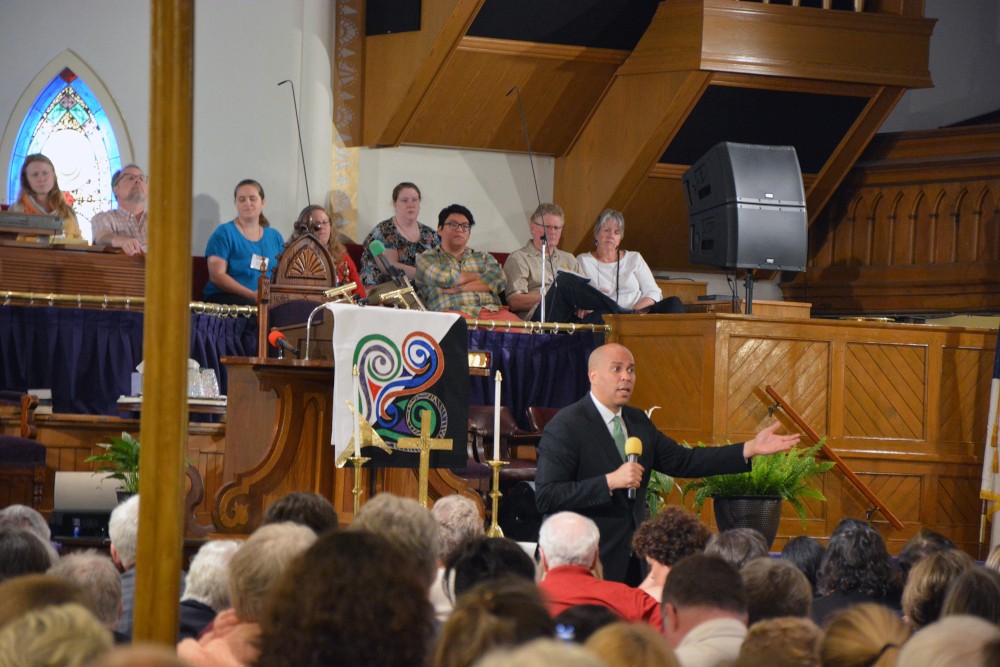 Sen. Cory Booker, D-N.J., speaks to the Festival of Homiletics on May 22, 2018, at Metropolitan AME Church in Washington. (RNS/Jack Jenkins)

"Today it’s the profiling and targeting of Hindu Americans and ascribing to them motives without any basis," Gabbard, a military veteran, wrote in a commentary published by RNS. "Tomorrow will it be Muslim or Jewish Americans? Japanese, Hispanic or African Americans?"

She later added: "To question my commitment to my country, while not questioning non-Hindu leaders, creates a double standard that can be rooted in only one thing: religious bigotry. I am Hindu and they are not."

Gabbard could be reluctant to give her opponents on stage a chance to bring up criticisms, but look for her to come back with an appeal to tolerance or a general shout-out to non-Christian faiths.

O’Rourke, Ryan and Delaney are all Catholics, a fact that Ryan and Delaney have discussed frequently. Both could feasibly do so again this evening, and Ryan may even bring up his passion for meditation.

O’Rourke’s references to religion thus far have largely consisted of his public refusal to attend a conservative Christian forum in Iowa because the organizers "have unapologetically provided a forum for dangerous anti-LGBTQ hate speech on numerous occasions."

De Blasio, who has a complicated relationship to religion, has said relatively little about faith during his campaign, but he and Inslee, a Protestant who has centered his campaign around environmental concerns, could name-check faith-based advocates for action on climate change such as Pope Francis.