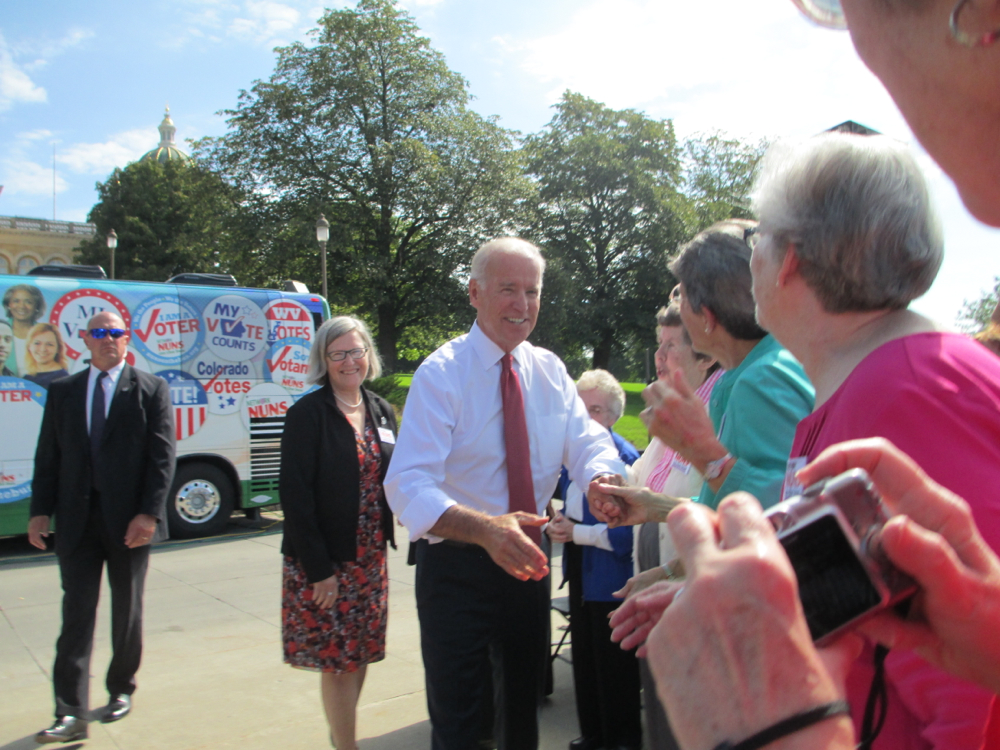 Editor's note: This is Part 2 of NCR's look at Catholic and religious groups mobilizing ahead of the 2020 election. Today, we chronicle Catholic groups working against the reelection of President Donald Trump. In Part 1, we examined Catholic groups supporting Trump's reelection.

Despite President Donald Trump's claim that if elected, Joe Biden will "hurt the Bible," progressive religious groups are organizing for the 2020 election in new and unprecedented ways.

Research just out this month from the National Congregations Study shows, in the words of University of Notre Dame's Kraig Beyerlein and Mark Chaves at Duke University, "surging political activism among religious progressives in what appears to be a direct response to Trump administration policies."

Throughout the four-night Democratic National Convention last month, Joe Biden's Catholic faith was highlighted by almost every major speaker. In fact, one of the most quoted lines of the convention was when host Julia Louis-Dreyfus joked that "Biden goes to church so regularly that he doesn't even need tear gas and a bunch of federalized troops to get there" — a dig at Trump's use of tear gas to clear out peaceful protestors for a photo op in front of St. John's Epsicopal Church earlier in the summer.

While most of the Catholic groups or Catholic-led organizations backing former Vice President Biden (or actively opposing the reelection of Trump) have neither the financial resources nor the infrastructure of their counterparts on the religious right, many are framing this election in the same explicitly religious language as Biden as a struggle for the soul of the nation.

Below is an NCR snapshot of some of the most notable Catholic-led groups and organizations who are leading those efforts. 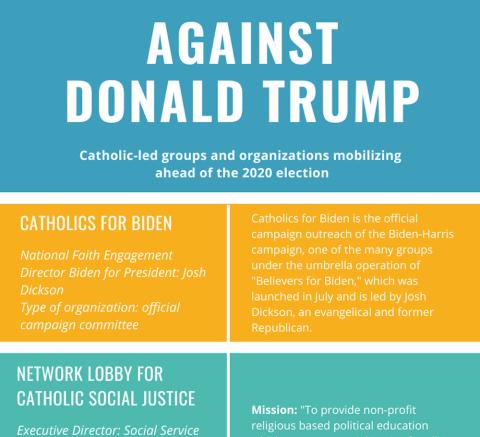 Catholics for Biden is the official campaign outreach of the Biden-Harris campaign, one of the many groups under the umbrella operation of "Believers for Biden," which was launched in July and is led by Josh Dickson, an evangelical and former Republican.

Schneck, in endorsing Biden, told attendees that Donald Trump is the least pro-life president in history, citing the president's policies of separating migrant parents from their children at the border, efforts to slash food stamp funding and his decision to restart federal executions.

"This is not a pro-life president," he said, adding that "I'm also here because there's another life we must consider after these four harrowing years, and that's the life of our nation."

The event, which was watched by 1,100 live viewers, also included testimonials from a number individuals who had worked in the Jesuit Volunteer Corps or were Jesuit educated, which was unsurprising given Biden's own close ties with the Jesuits. The organizers said that in the coming weeks there would be more Catholics for Biden issue discussions and prayer sessions meant to encourage Catholic voter turnout.

Mission: "To provide non-profit religious based political education which promotes social Justice for all."

Originally founded as "The Network" — a national organization of religious sisters who voted to set up operations in the nation's capital to push for federal legislation on issues such as environmental protection, poverty relief and opposition to the Vietnam War — Network was a critical force behind the passage of the Affordable Care Act in 2010.

Network's executive director, Sr. Simone Campbell, authored a letter in support of the act that was signed by much of the leadership of women religious in the United States, and President Barack Obama and Vice President Joe Biden thanked her for helping gain Catholic support of the legislation. Given their national spotlight, in 2012 Network launched the recurring Nuns on the Bus tour where religious sisters traveled the country promoting immigration reform, anti-poverty initiatives and voter engagement. In 2014, they were joined by Biden in Iowa for the launch of their national tour.

Network is divided into two separate entities: Network Lobby and Network Advocates, the former dedicated to advocacy and lobbying, and the latter focused primarily on non-profit educational outreach. In past elections, Network has avoided endorsing particular candidates, but this year they have mounted a campaign specifically targeting Trump for not being consistent with Catholic values. The organization has announced a $75,000 digital ad buy in swing states such as Wisconsin, Michigan, Pennsylvania and Florida to target Catholic voters and encourage them to become "Pope Francis Voters," with messaging that being pro-life encompasses more than opposing abortion. This includes $25,000 in Spanish-language advertising.

Due to the global pandemic, this year Network will host a virtual Nuns on the Bus tour from mid-September to mid-October with the theme "Who We Elect Matters." In August, Campbell offered the opening prayer on the final night of the Democratic National Convention. She also spoke at the launch of Catholics for Biden, telling attendees, "we Catholics have got to make sure we get it right this time," adding that Catholics must become "multi-issue voters" and not focus singularly on abortion.

Founded during the 2004 presidential contest when Democratic candidate Sen. John Kerry's Catholic faith was the subject of much discussion and scrutiny, Catholic Democrats was originally formed under the banner of "Catholics for Kerry." The organization would later help mobilize "Catholics for Obama" in 2008 and 2012 and, according to Krueger, today claims more 50,000 supporters.

For the 2020 election, Catholic Democrats has launched media campaigns in three swing states where Catholics make up a sizable portion of the electorate: Michigan, Pennsylvania and Wisconsin. Most recently, in response to Trump's comments in August that, if elected, Biden would "hurt God," Catholic Democrats launched an online petition of support for Biden.

"While some of us may personally know the vice president, most of us do not. However, we all believe that over the course of his life, Joe Biden has learned to 'walk humbly with [his] God,' " the petition states. "He devoutly practices his Catholic faith in the quiet manner that was imbued in him by his Irish Catholic family and the sisters and priests who helped form who he is today."

Mission: "Vote Common Good is inspiring, energizing, and mobilizing people of faith to make the common good their voting criteria and to pursue faith, hope, & love for a change on election day 2020 and prevent the re-election of Donald Trump."

Rather than convincing individuals to switch their party affiliation, Vote Common Good is working to convince voters to put faith above party, which they believe will lead to a rejection of Trump.

At the beginning of 2020, the organization kicked off the year with a "Faith, Hope, & Love for a Change on Election Day National Bus Tour," scheduled to visit all 50 states but specifically targeting swing states through 90-minute (now socially distanced) rallies — characterized as part campaign rally, part party, part revival — aimed to encourage voter turnout. Other initiatives include a "Pray for a Change in the President" campaign with weekly meetings on Fridays to "pray that the Oval Office is turned over to a candidate who walks in Faith, Hope, and Love."

While the organization is ecumenical and its executive director Doug Pagit is a progressive Christian pastor, its Catholic outreach is led by Patrick Carolan, the former executive director of the Franciscan Action Network and the Global Catholic Climate Movement.* In August, Vote Common Good announced a partnership with the Lincoln Project, an anti-Trump Republican led group, with a joint focus on targeting white Catholics and white evangelicals who voted for Trump in 2016.

*Catholic Democrats' organizational status has been updated; the name of the organization Global Catholic Climate Movement has been corrected.