Goodbye, climbers! We need to restore servant leadership in the priesthood 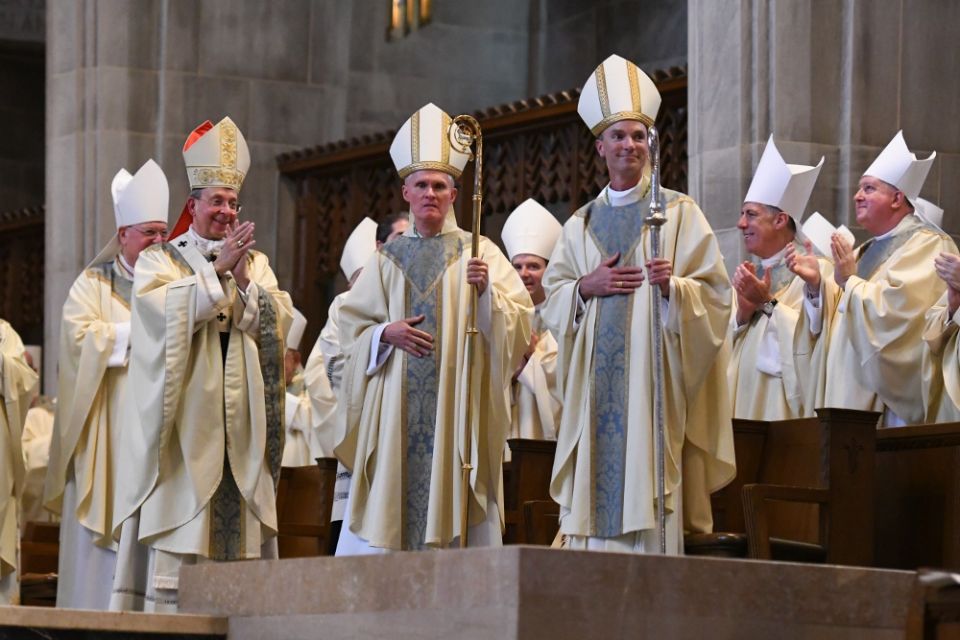 Baltimore Archbishop William Lori, left, and others applaud as Auxiliary Bishops Mark Brennan and Adam Parker stand with their crosiers during their Jan. 19, 2017, ordination Mass at the Cathedral of Mary Our Queen in Baltimore. (CNS/Catholic Review/Kevin J. Parks)

When I was in the seminary in Rome, we called them "Alpiners," the "climbers" among our fellow seminarians who were ambitious to climb up the corporate ladder of the church. They had a secret (or not so secret) ambition to be a bishop or a Vatican official. Sometimes it was painfully obvious. One guy was caught with a "hope chest" in his room, full of bishops' accoutrements like miters, a pectoral cross and a collapsible crozier.

For the "Alpiners," their priesthood is a not a call to serve, but to be served. It is the opposite of what Jesus wanted. (See Luke 22:27, John 13:14 and Matthew 23:11-12.) Ambition is one of the worst and most destructive features of clericalism. If we are going to reform the priesthood, we need to tame the demon of ambition and substitute the idea of servant leadership.

Ambition gives oxygen and energy to the evils of clericalism. It comes from a desire to dominate others. It is a common temptation. In the desert, even Jesus was tempted by the evil one with the power to rule over the kingdoms of the Earth.

Not all ambition is a bad thing. It is not a bad thing to have an "ambition" to develop your gifts and talents. It is good to want to be an excellent musician or preacher or scholar. All these talents can be put at the service of the church.

But the desire to rule is not a good thing. It a feature of megalomania and narcissism. It betrays not talent, but insecurity. Ambition for authority shows an internal emptiness that can only be filled by external deference, titles, honor and power.

This corrupted ambition is the sin of the Pharisees. Jesus takes it so seriously that Matthew's Gospel devotes an entire chapter (Ch. 23) to this one sin. He said:

All their works are performed to be seen. They widen their phylacteries and lengthen their tassels.
They love places of honor at banquets, seats of honor in synagogues, greetings in marketplaces, and the salutation ‘Rabbi.’
As for you, do not be called ‘Rabbi.’ You have but one teacher, and you are all brothers.
Call no one on earth your father; you have but one Father in heaven.
Do not be called ‘Master’; you have but one master, the Messiah.
The greatest among you must be your servant.
Whoever exalts himself will be humbled; but whoever humbles himself will be exalted.

Jesus called pharisees a "brood of vipers" (Matthew 23:33). He might say the same thing about arrogant clerics.

Clerical ambition has always been around. James and John were "Alpiners." They came to Jesus and asked to sit "one at your right hand, and the other at your left" (Mark 10:37). It is not just clerics who are ambitious for power in the church. Sometimes it is their families. After all, it was the mother of James and John in Matthew's version of the story who intervened for her sons to sit at the hand of Jesus. This kind of ambition is from the evil one.

This self-aggrandizing ambition is seen in the lives of many clerics who, like Theodore McCarrick and Michael Bransfield, climb the church ladder. They often talk about being humble, but they are not at all humble. They spend enormous amounts of money on themselves. They use their power and influence to aggrandize themselves. Bransfield and McCarrick both ran the Papal Foundation to funnel money to Rome and thereby gained a lot of influence in the church.

Where does this clerical ambition come from? Let me count the ways.

It starts early in our training. Seminaries are incubators of ambition. We are taught to want and to value the superficial trappings of clericalism; the clothes, the titles, the perks. Seminarians are encouraged to have an obsequious deference to the hierarchy in everything.

It is seen in the clothes. Clericalism loves special clothes; cassocks and capes, lace and silk, birettas and miters. The fancy clothes separate clerics from others and practically shout, "Look at me." The pretentions of a Cardinal Raymond Burke parading around in his watered silk "cappa magna" (big cape) and fancy lace surplices would be laughable if he did not mean for it to be taken so seriously. 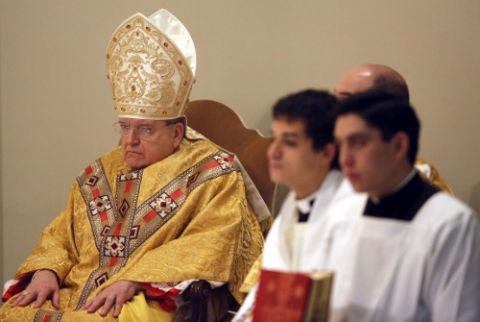 Cardinal Raymond Burke, then-prefect of the Supreme Court of the Apostolic Signature, the Vatican's highest court, celebrates Mass to mark the opening of the judicial year of the tribunal of Vatican City Jan. 11, 2014. (CNS/Reuters/Stefano Rellandini)

Or look at our presider's chairs and cathedra in cathedrals and churches everywhere. They are really "thrones" of potentates, inherited from Byzantium. Jesus said that the pharisees demanded "seats of honor" in synagogues. So do clerics. Look at the chairs in most cathedrals, fit for an emperor.

Then there are the exaggerated titles. We call them "Excellency" or "Eminence" or "Monsignor." These are not Christian titles; they are the pretentions of Italian nobility. The worst is "Monsignor," which means "my lord" in Italian. Only Jesus is Lord. The cardinals have the temerity to call themselves "princes" of the church. What would Jesus think of that?

After the clothes and titles come the fancy episcopal residences and rectories. Pope Francis has been trying to model humility to bishops by living in two rooms in the Casa Santa Marta rather than the papal apartments. But legions of bishops and many priests are not getting the message. Bransfield spent more than $4 million on his house in West Virginia. McCarrick spent hundreds of thousands of dollars remodeling two apartments and a house for himself in Washington. Remember the "bishop of bling" in Limburg, Germany, who spent $42 million on his residence? Ask yourself, where does you bishop live? How does that house reflect Christian poverty of spirit?

Most egregious of all is the desire for offices of power and prestige that have nothing to do with being servants of God or the church. In this regard it is time to take all the vestiges of the Papal States to the junk yard. What would this mean?

Most of the Vatican pretensions to statehood are the only ways to compensate the papacy for its loss of temporal power in the Italian Risorgimento in 1870. For 100 years, the papacy has been licking its wounds and trying to hang on to the trappings of monarchy. Jesus told us to "render unto Caesar" not to become Caesar.

What is the cure for ambitious clericalism? Take away the career path and all its trappings. The pope is trying to do just that. His first Christmas in Rome, he told the Vatican curia to get out of Rome and back to their dioceses. When he was presented to the crowd in St. Peter's Square, he refused the velvet and ermine cape traditionally worn. He never occupied the papal apartments. He ditched the papal limousine. He carries his own bag. In meetings, he sits on an ordinary chair, not a throne on a raised dais. He wears his worn-out black shoes. His whole life says servant, not ruler.

Time for real reform. Francis says he wants a poorer church for the poor. Let's get started. One thing is clear, ambition for wealth and power are not part of that church.

People have asked how McCarrick and Bransfield and their type could rise so high in the church despite their sins and crimes. The answer is more straightforward than people might expect. They sought those higher offices and went after them. They got what they wanted. People did not want to stand in their way. They were champion "Alpiners."

Column | Goodbye, climbers! We need to restore servant leadership in the priesthood