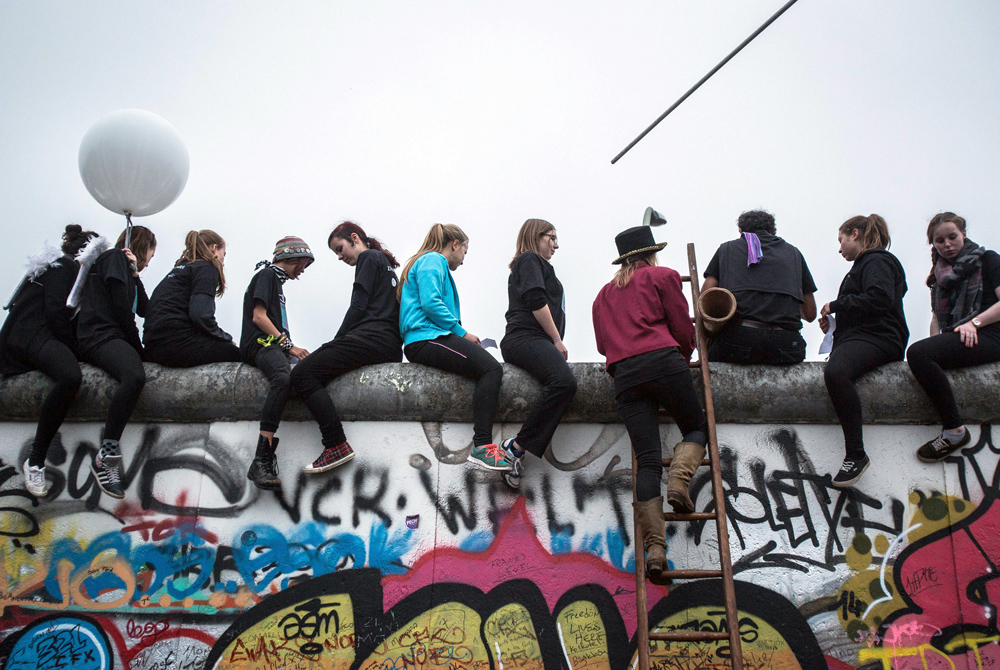 People sit on the East Side Gallery and watch a circus performance in Berlin, Nov. 9, 2014. (CNS/EPA/Maja Hitij)

Editor's note: NCR's freelance reporter Patrick Egwu was in Berlin in November attending the Falling Walls Conference, which celebrates breakthroughs in science from around the world. Coincidentally, it was the 30th anniversary of the fall of Berlin Wall, with different activities taking place across the country. Patrick spoke with some Catholics in Berlin on the anniversary.

Sabine Sellner was 16 years old and living in East Germany when the Berlin Wall fell 30 years ago. The fall of the wall was a watershed moment in the history of Germany and a decisive event in the fall of communism in Eastern Europe.

Now 46, Sellner remembers with nostalgia the events of that day and the activities that marked the fall of the wall on Nov. 9, 1989, and the reunification of East and West Berlin.

"It's so exciting for me because when the wall fell, a whole lot of doors opened which we thought would never open, and basically I felt like spreading my wings and flying," Sellner said. "Then our pathways were quite defined but now having many opportunities really excited us."

Each year, Nov. 9 is one of the busiest and memorable days in Berlin and indeed the whole of Germany. This year, a lot of activities — rallies, walks, exhibitions, concerts and celebrations were held in major cities and centers across the country. In the center of Berlin, fireworks and chants on busy streets were seen at night. And so was the traffic too.

German Chancellor Angela Merkel and President Frank-Walter Steinmeier attended the ceremonies where they placed roses on the remaining portions of the wall in remembrance of those who died while trying to cross to the West. Leaders of Poland, Slovakia, the Czech Republic, and Hungary attended the official events.

"I remember those who were killed at this wall because they were seeking liberty," Merkel said at the memorial. "We want to ensure that no wall will separate people ever again."

From the window of my hotel room which stood at the center of Berlin, I saw candle lights and fireworks going up in the air and brightening the dark clouds. At 8 p.m., I left my room and took a walk along major streets and social centers in Berlin. From Alexanderplatz to Brandenburg Gate — the center of major activities for the anniversary. Hundreds of policemen and sniffer dogs were seen patrolling the city in their trucks and making sure that no one posed a security threat to the celebration and events marking the day. The crowds too were surging — thousands of them from every corner and subway station, heading to the Brandenburg Gate where fireworks and jazz music were playing amidst joyous chants from Berliners and others who had come to witness the events.

Specifically, the Brandenburg Gate marked the beginning of a new Germany as it played a significant role and was, unfortunately, the sad symbol for the division of Berlin and the rest of Germany. The gate stood between East and West Germany and reflects the country's turbulent past and its peaceful achievements.

"It shows the triumph of good over evil," Sellner, a parishioner at Sacred Heart Catholic Church in Berlin, told NCR. "I certainly can say that we have enjoyed enough benefits with the walls coming down and I cannot believe it is 30 years already. Living in East Germany then, I was old enough to remember some of the things happening at that time." 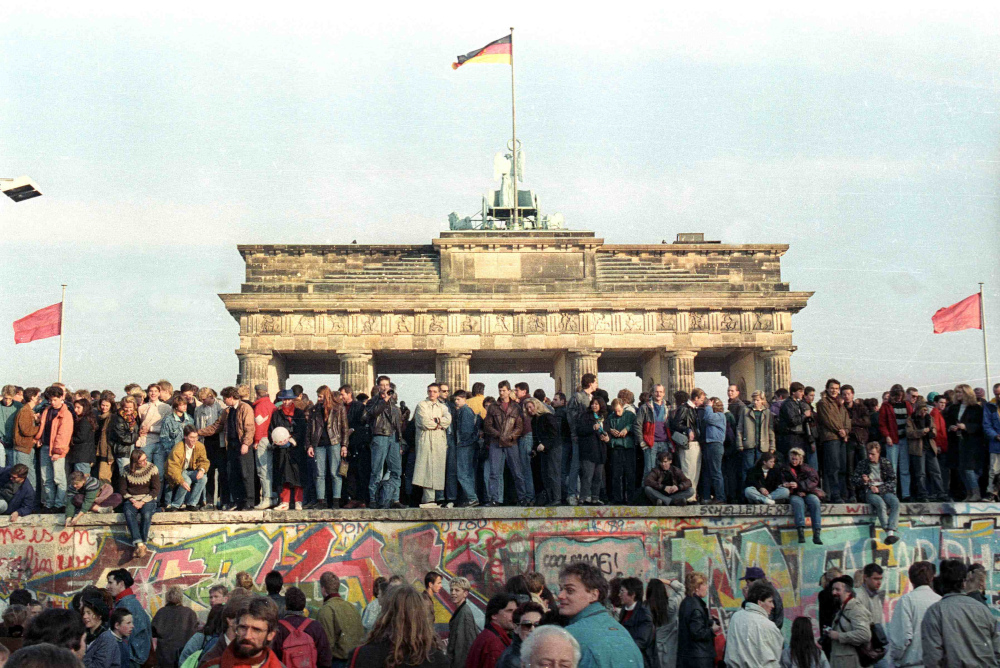 People stand atop the Berlin Wall in front of the Brandenburg Gate in this Nov. 10, 1989, file photo. Catholic bishops from the European Union marked 30 years since the breaching of the Berlin Wall with tributes to those who worked for peaceful change, as well as warnings against resurgent "ideologies behind the building of walls." (CNS/Reuters/David Brauchli)

Many families were separated when the wall was built and about 136 people were killed trying to cross to West Berlin from the East. But Sellner says she had a wonderful childhood growing up in East Berlin.

"Every person in East Germany has a story to tell but my own at that time was a happy and protected one because it was quite community-based and a lot of opportunities in sports and being looked after and so on and our family wasn't much politically involved," she told NCR. "So at that time, I was not missing out on too much, though I knew in the future there were a lot of restrictions waiting for me professionally, traveling wise and so on."

"It was very enthusiastic and everybody went to the wall to welcome people from East Germany," said Mary Ellif, who is from Turkey but has been married to a German for the past 20 years. "People were rejoicing and celebrating."

Ellif was born in Berlin and living in West Germany when the Wall fell. She remembers the events of the day.

"It is one of the biggest events we celebrate in Germany at the moment because it changed the course of our history," Ellif says. "I was in the West side and the atmosphere was very tense," she recalls. "We didn't have the internet except for TV and radio and if you didn't watch it on TV, some people didn't even get it. Two days later, somebody said, 'You heard about the wall?' and people were surprised because they never saw it coming."

However, despite the achievements of the fall of the wall and its significance among Germans and the rest of the world, Sellner says the wall has not totally fallen in the hearts of the people.

"I think in many ways they [East and West Germany] are united just like they are separated in too," Sellner says. "The youngsters don't remember the separation too much but the older generation from 45-50 years upwards, they still have the wall in their minds. So they always refer back to the East and West Germany times."

At the Brandenburg Gate, the one voice that keeps re-echoing in the midst of the celebration is that of unification, peace and love between everyone in Germany. They want no more walls in their lives but Sellner feels much still needs to be done.

"I think there is quite a lot of work to do in terms of breaking the wall totally because it still lives among some people here," Sellner said, making reference to the division that still exists between the East and West, especially as the far-right takes hold in the former communist East.