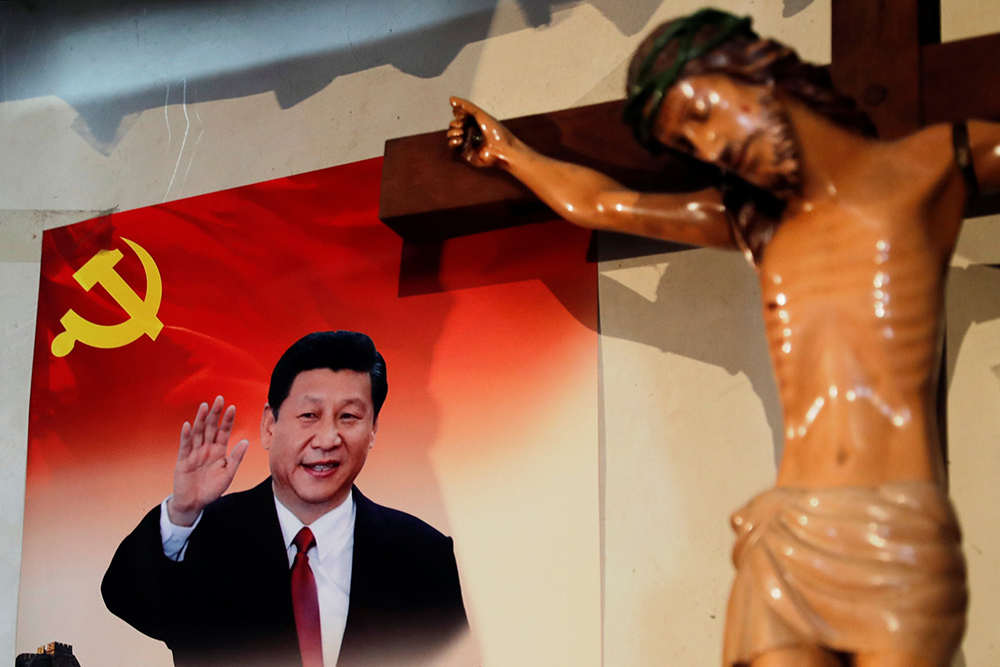 A poster of Chinese President Xi Jinping hangs next to a crucifix on the wall of the house of a Tibetan Catholic in Niuren village, in China's Yunnan province, in 2018. (CNS/Reuters/Tyrone Siu)

When the Vatican on Nov. 26 issued a public criticism of the Chinese government's transfer of a Catholic bishop to a diocese not recognized by the Holy See, it was the first time the Vatican explicitly challenged the Chinese government since entering into a bilateral agreement in 2018 over the appointment of bishops in the country. For some human rights advocates and religious freedom experts, they hope this noted shift in Rome's posture toward Beijing is one that will continue.

"The China of 2018 is far different from the China of 2022," observed Stephen Schneck, a commissioner of the United States Commission on International Religious Freedom. Schneck believes it is time for the Vatican to reconsider its approach to China, one that traces its origins to Pope John Paul II.

"Originally, it looked like a savvy move to restore the possibility of appointing bishops in China, which are so badly needed," Schneck said of the Vatican's 2018 agreement. "I would go so far as to say that originally it was a good plan. It was worth taking those experimental steps."

"Now things have changed under [Chinese President] Xi [Jinping]," Schneck told NCR. "It's no longer the China that the Holy See dealt with initially in this regard." He described increased governmental efforts to nationalize both public and private religious spaces for people of all faith traditions. 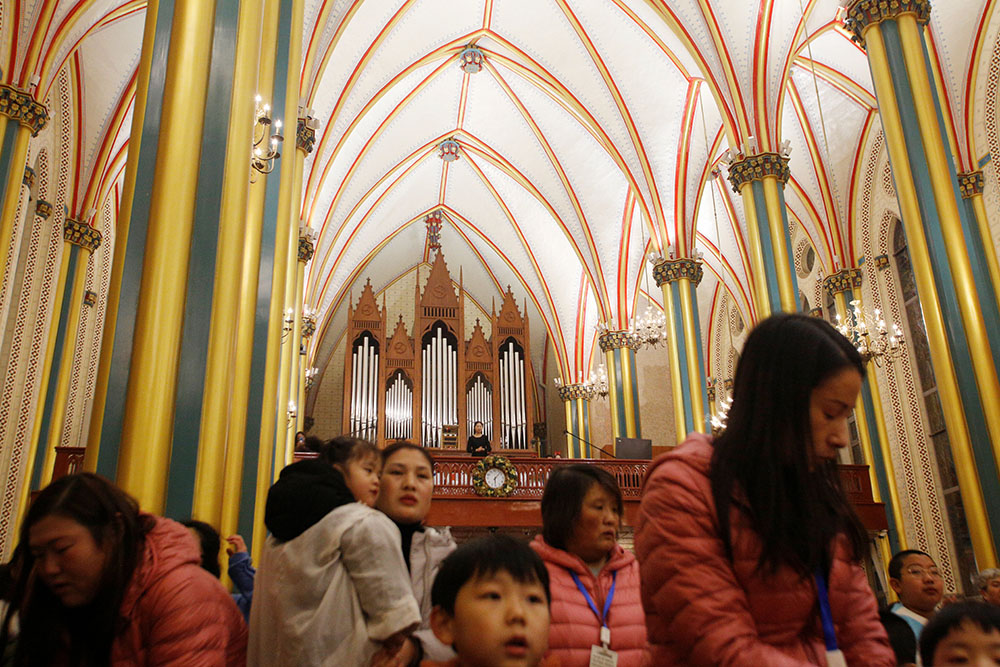 Worshippers attend a mass at Xishiku Cathedral, also known as Beitang, on Christmas Eve in Beijing in 2019. (CNS/Reuters/Florence Lo)

While the specifics of the 2018 Vatican-China agreement have never been made public, the accord broadly outlines the procedures for selecting bishops for the country that are approved by the Holy See ahead of the ordination.

Despite the agreement, however, experts have warned that the situation for the country's estimated 10 million-12 million Catholics has seemingly deteriorated, with church demolitions and crackdowns against Catholic priests.

But perhaps no one has become more symbolic of what is at stake for the country's Catholics — and the fate of the Vatican's China agreement — than retired Hong Kong Cardinal Joseph Zen.

At age 90, Zen was arrested in May for charges related to failing to register a now-defunct charitable fund to support individuals arrested in Hong Kong's pro-democracy protests in 2019. On Nov. 25, a Hong Kong court found Zen, and five others, guilty and fined him the equivalent of just over US$500. 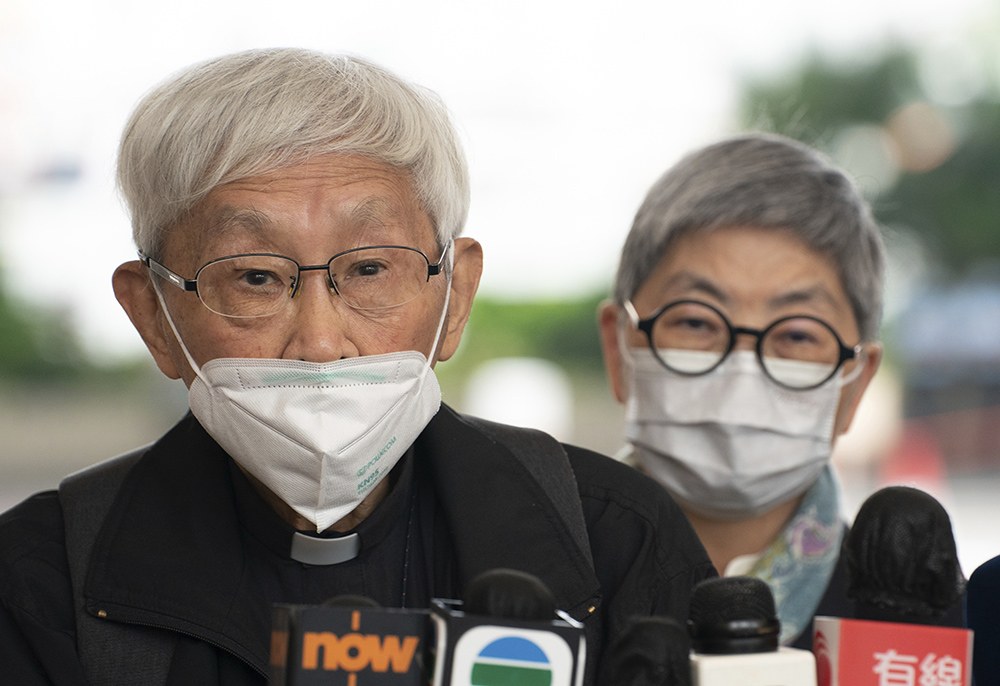 Cardinal Joseph Zen, left, speaks to the media at the West Kowloon Magistrates Courts after the verdict session in Hong Kong Nov. 25. The 90-year-old Catholic cardinal and five others in Hong Kong were fined after being found guilty of failing to register a now-defunct fund that aimed to help people arrested in widespread protests three years ago. (AP/Anthony Kwan)

Zen has been a vocal champion of democracy and a fierce critic of the Vatican's approach to China.

Following Zen's arrest in May, the Vatican expressed "concern," while the White House called on China to "immediately release" the elderly cardinal. In May, the U.S. ambassador to the Vatican, Joseph Donnelly, told NCR that he believed the arrest to be "outrageous" and that the United States had registered its concerns with the Holy See about its approach to China.

Throughout the Zen trial — and upon news in October that even in the midst of it, the Vatican had just renewed its agreement with China for another two years — the Holy See has come under intense scrutiny, especially among conservative Catholics.

The editorial board of The Wall Street Journal accused the Vatican of giving China a "free pass" on inhumane behavior, which it argued has compromised the church's moral authority, and published several commentaries lambasting the Holy See's approach. Well-known papal critics, such as Archbishop Carlo Maria Viganò, disgraced former papal representative to the U.S., have buttressed Zen's cause.

Schneck, however, argues that concern for Zen and the situation in China should not be subject to political or ecclesial polarization.

"Many of Pope Francis' enemies and dislikers within the church itself, including among bishops, have used the situation with China as one more front in their long campaign to discredit or diminish His Holiness, and it's shocking and lamentable," he said.

According to Hong Kong native Victoria Tin-bor Hui, a political science professor at the University of Notre Dame, much of the attention in the United States that is given to Zen and the situation in China has come from individuals or organizations on the political right. 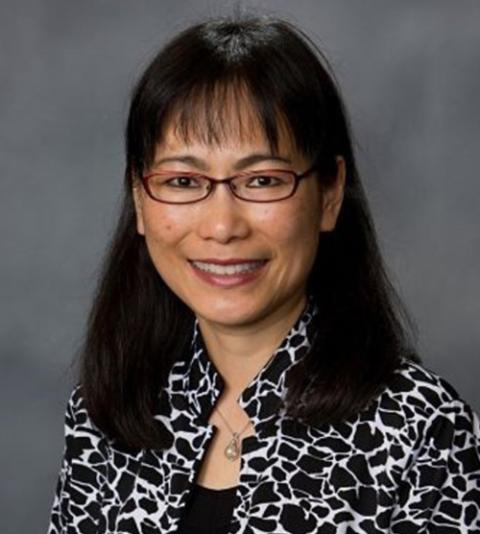 Hui noted that Hong Kong entrepreneur and media mogul Jimmy Lai, a major backer of the pro-democracy movement who was arrested in 2021, is an adult convert to Catholicism. Wall Street Journalist columnist William McGurn served as Lai's godfather, and a popular documentary chronicling Lai's stance against the government was distributed by the libertarian Acton Institute, which was co-founded by a Catholic priest, Fr. Robert Sirico.

"A lot of Hong Kongers feel like they have to go to the right in order to have help in Hong Kong's struggles to fight Beijing in general," she told NCR.

"I do hope liberal Catholics will say more," Hui said of both Zen and the situation in China.

Hui noted that in the United States, the Democratic party had always listed Hong Kong as a concern in its official platform and outgoing Speaker of the House Nancy Pelosi has been "very vocal" in her support for religious freedom and democracy in Hong Kong, a position Hui wished was more widely shared by other progressives, including Catholics.

"Zen is a symbol for democracy in China, where the possibility of democratic reforms has just gone so far south in such a short time," he added.

During a Nov. 22 interview with America magazine, Francis defended his approach to China, saying the dialogue is the only option that the church has, even if there are failures along the way.

According to Michel Chambon, coordinator the Initiative for the Study of Asian Catholics, "Pope Francis has been very firm that we need to remain open to China."

Chambon, who is a supporter of the Vatican's approach to China, told NCR that while he believes that Zen was "clearly targeted" by Chinese authorities and that the "accusations were ridiculous" and meant to serve as a warning sign, he believes Zen's "extreme opposition" is not an approach consistent with "what the Gospel is inviting us to do." 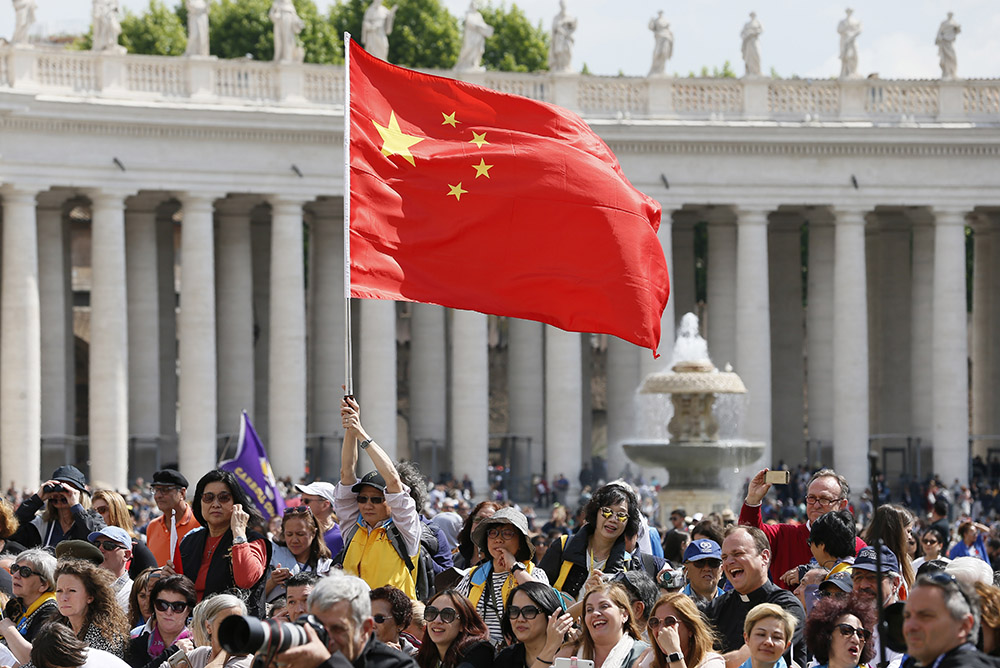 A man waves China's flag as Pope Francis leads his general audience in St. Peter's Square at the Vatican May 22, 2019. (CNS/Paul Haring)

From 2003 to 2006, Chambon served as a pastoral worker in Hong Kong, during which time he praised Zen's active ministry with Catholics there, but said he watched him become "more and more extreme against Beijing."

"In many ways, it's useful," he said of the warnings that Zen offers, "but we cannot reduce the whole church to that."

Yet with the Zen verdict and the Vatican's recent public denouncement of Chinese authorities transferring a bishop without Holy See approval, Chambon believes it is clear that both sides are testing one another.

Jesuit Fr. Thomas Reese, a former chair of the U.S. Commission on International Religious Freedom, said that when it comes to understanding the Vatican's relationship with China, "you're negotiating a hostage situation without police backup."

"The Vatican has no power in this situation," he told NCR. 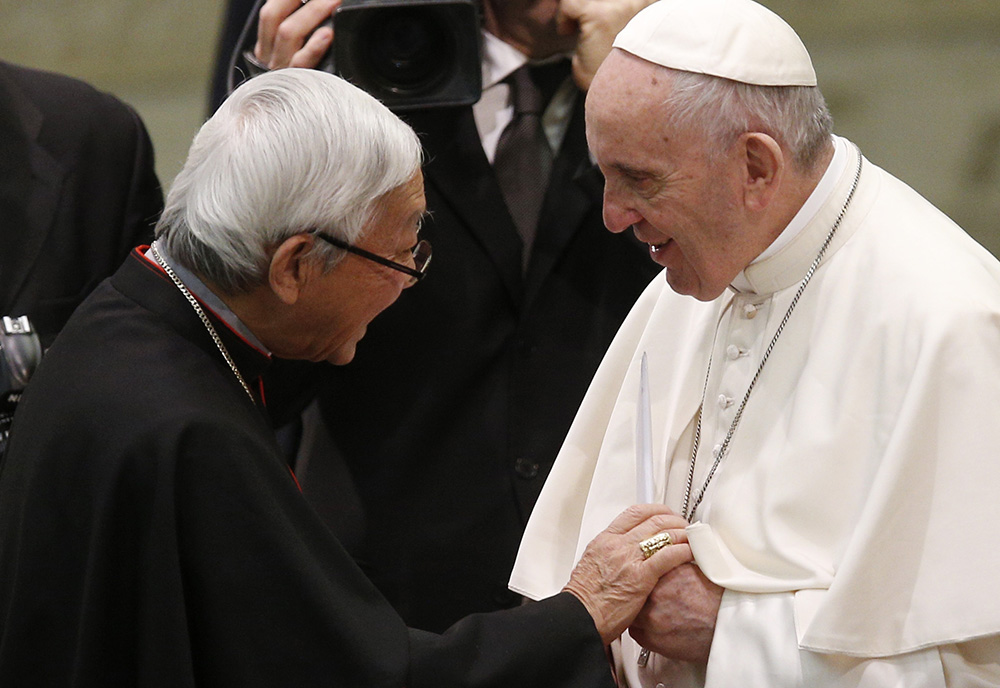 Reese said of China, "They're the ones with guns." That, he said, limits the effectiveness of what the pope or Vatican officials might say or do.

"It won't change a thing on the ground," he said.

Reese said that based on his experience on the commission, a bipartisan U.S. body responsible for monitoring religious freedom, progressives in the United States have neglected religious freedom concerns. While he believes that direct Vatican criticism of China would produce little effect, he believes all Catholics have a vested interest in being concerned about religious freedom, in China and elsewhere.

For that reason, Schneck says he views this as a moment in which silence is not an option.

President Xi's project of Sinicization, he observed, has led to an approach toward religion that is an "effort to remind the religious Chinese that the real authority is the state, that there's nothing outside of that, be it Rome or God, that they can appeal to."

"And as Catholics," he added, "we should be speaking out about these concerns."

A version of this story appeared in the Dec 9-22, 2022 print issue under the headline: Has the Vatican's dialogue with China reached its limits?.