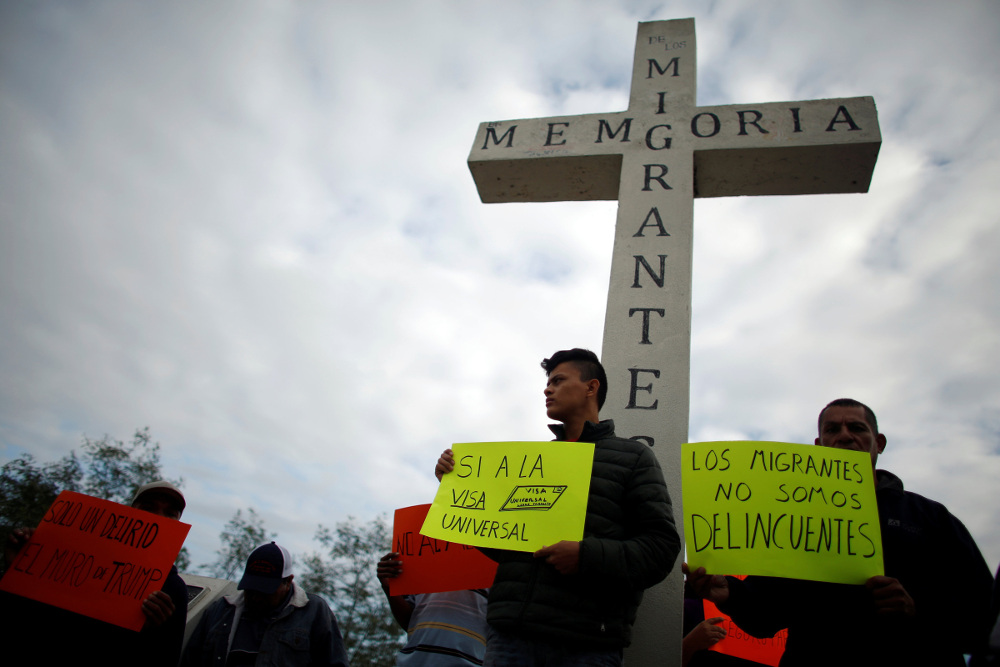 Migrants gather in Reynosa, Mexico, gather near the McAllen, Texas, border to participate in a Jan. 10, 2019, demonstration. (CNS/Tomas Bravo, Reuters)

The nation's immigrant population continues to leave a mark in their chosen corners of the United States, just as generations of immigrants before them have.

An immigrant-dominated panel Feb. 3 at the annual Catholic Social Ministry Gathering in Washington showed immigrants seizing educational and professional opportunities that they would have had little hope of finding in their home countries.

Zenayda Bonilla, a home health aide for the Golden Steps Elder Care cooperative in Brooklyn, New York, remembered coming from El Salvador in 2003, leaving her 3-year-old son behind — they were eventually reunited, and he will graduate from high school this year — but being confounded by the strangeness of her new home.

"It was hard for me to find a job because I did not speak English. It was a big barrier for me. People made fun of me," Bonilla said. "I had to suffer discrimination in different ways because you don't speak the language you're supposed to speak. Add the way that you look, you look like the same thing that happens right now: You think that immigrants aren't human beings.

"It was a hard thing to defend myself, because I could not explain what I want," Bonilla added. But she took advantage of English classes and CPR, nutrition and other classes after going to a Golden Steps open house to qualify for a job there.

Because Golden Steps is a worker-owned cooperative, Bonilla gets to pocket nearly all of the $18-$19 hourly charge for care. Most for-profit home health services charge around $30 an hour, but pay the caregivers about $13, she said. Bonilla told Catholic News Service after the panel that she plans on going to nursing school. "I know I can do this," she said.

Ahmed Ali, a founder and current executive director of the Greater Minnesota Worker Center in St. Cloud, came to the United States from Somalia via Kenya, where he had been in a refugee camp following a continuing pattern of what he called "chaos and lawlessness" in his home country.

"In 2006, my family got an opportunity to resettle in the United States. I had my first experience of snow in Minnesota," Ali said. "I've since become a Minnesotan; I don't care about snow anymore," he joked before admitting, "Language was an experience for me."

In addition, "I came from a country where everybody looked like everybody else. When I came over here, I find that I was in a minority culture." Ali moved to Chicago, which he found to be more diverse, and got a two-year associate degree there, and moved back to Minnesota eight years ago.

"I tried to see how I could be useful to the community," Ali said, recalling he was at a Somali restaurant when someone approached him saying, "We're trying to do something for immigrant workers. If you're interested, please come." It was the first meeting of the worker center, where he has been executive director the last two years. "We try to make America better than when we found it," he added.

"I disagree with President (George W.) Bush on a number of things, especially the wars in Iraq and Afghanistan, but he allowed the greatest number of Somali refugees," Ali said. "If I were to try to come today, I would not be able to come. Somalia is part of the travel ban."

Emigrating from Ecuador at age 11 with her parents, Monica Guerrero works with Baltimoreans United for Leadership Development, or BUILD, in Baltimore. Not only was she the first in her family to go to college, she has since earned two master's degrees.

Volunteering with Catholic Charities in Baltimore, where she moved seven years ago, "was a life-changing experience for me," Guerrero said.

"I went to the Esperanza Center, and I saw the same struggles that my mom faced," she added. "I saw the men, struggling to make money for their families here and to send money to their family back home — that was my dad." And "those kids I work with now are me when I was a kid," she noted.

In Baltimore, Guerrero said, "You hear the comment, 'Oh, there's not too many Latinos.' But Latinos are a great part of the Baltimore population," which has grown 134 percent over the past decade. "It's a number," she said, "you should not ignore."

One missing number, though, troubled her greatly.

"Last year there was a spike in suicide in our community. I'm a public health servant. And there was nothing. There was no data on Latinos who die by suicide in Maryland," Guerrero said. "Nobody knew that (number), and that was unacceptable."

But to combat suicide, Guerrero said, "we partnered through a parish through my day work. An emergency response to teach people how to recognize the symptoms of stress. If you are an immigrant and you have to cross the border, it's more than the experiences, you had in your original country: violence, war, crime. And the path to get here is extremely hard — children and adults."

Despite her advocacy and accomplishments, Guerrero said not all the shadows have evaporated. "My ma and my dad, they don't speak English. They are very intimidated," she said. "They think the security guard is the police. Especially the immigration police."