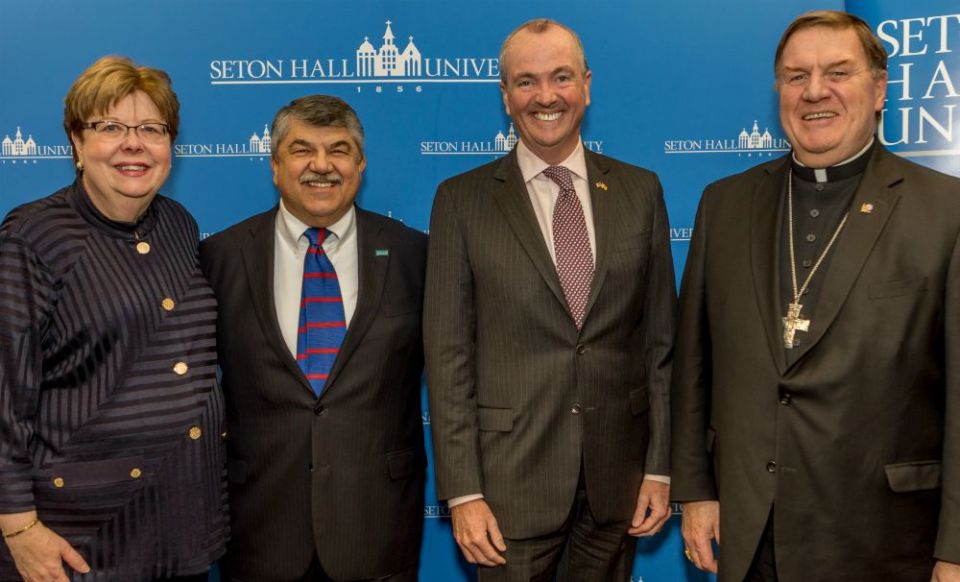 South Orange, N.J. — Cardinal Joseph Tobin of the Newark, New Jersey, Archdiocese, pointed to himself as ample proof that the Catholic Church has long supported its working men and women. One of 13 children, "we ate and we had clothes because of the United Auto Workers," he told some 250 people gathered at Seton Hall University here March 6.

Because his father was a union man with General Motors in Detroit, the large family had a share of the goods needed for family life, Tobin said. He also cited the founders of the United Auto Workers, who stated that they had formed their union based "on the principles of the Catholic Church."

Tobin's audience stood and clapped several times, not because attendees were at a union meeting, but because they were celebrating the fifth anniversary of the pontificate of Pope Francis, an outspoken supporter of workers, said speaker after speaker, including New Jersey's newly elected Democratic Gov. Phil Murphy.

Murphy cited Francis' call for "an economy that lifts families up" as a joyful message for the state's 3.5 million Catholics. He saluted public servants — including the teachers, cleaners and security officials at Seton Hall and at other institutions — "who show up day after day and do their jobs." And he called the union door "the one that has led millions into the middle class."

Tobin shared that the U.S. bishops had filed an amicus brief with the U.S. Supreme Court in the Janus v. AFSCME case on behalf of the freedom of public-sector workers to form effective unions.

Tobin did not know whether the bishops' conference would endorse the campaign to raise the minimum wage to $15 an hour. The agenda for upcoming episcopal meetings has yet to be decided, he told NCR.

Murphy said he hoped all workers could achieve Francis' vision of solidarity and a new global economic system that respects the dignity of their work and of all workers. But to obtain tax fairness and tax equity, "millionaires will have to pay their fair share" and corporate and hedge fund loop holes will have to be closed, said the governor, a former Goldman Sachs executive.

Besides applause for the cardinal, the governor and the interim president of Seton Hall, Mary Meehan, the evening belonged to keynote speaker, AFL-CIO President Richard Trumka.

Trumka said that the fate of the labor movement, its strength and solidarity will depend on how it treats "our neediest brothers and sisters," lifting a line from Francis.

He noted that today only 1 in 10 U.S. workers has the ability to bargain collectively with an employer through a union. "Yet our labor movement defends the other nine workers every day," Trumka said, thanking the bishops for their amicus brief in support of public sector workers.

It is also why organized labor defends Social Security, Medicare, Medicaid and worker's compensation, he said. "We defend the freedom to vote against those who would take this nation back to the days of Jim Crow. We fight … for a tax system where corporations and the wealthy pay their fair share so we can invest in the programs working people need."

In the audience was Stuart Appelbaum, president of the Retail, Wholesale and Department Store Union, who attended and spoke at a recent Vatican meeting at which Francis stated that work "is more than a mere doing; it is, above all, a mission. … We collaborate with the creative work of God when, through our work, we cultivate and preserve creation."

Trumka said those words speak to the lived experience of every worker he has ever known — coal miners, strawberry pickers, nursing aides and graduate assistants alike. "All express pride in the ability to create and to do good. Work gives our lives meaning. … We do not get dignity from power or money or culture. We get dignity from work," he said, echoing Francis.

The pope's message about the value of work clashes with that of some of the world's richest and most powerful people, who predict that society is hurtling toward a future in which there will be no work at all, Trumka said. Francis had called such forecasts both a fantasy and a nightmare. "People will always work," the labor leader insisted. "Technology should improve our working lives, not impoverish or degrade us," he said, adding that Francis has said: God values work, not robots.

Trumka also cited Francis' remarks against chauvinism and injustices toward women in the workplace, calling their unequal pay "a disgrace." Time after time, women are victims of workplace dangers, he said, recalling the deaths of 1,134 garment workers in the aftermath of the 2013 Rana Plaza collapse in Bangladesh. The global labor movement has asked the world's largest brands and retailers to require their suppliers to, at the very least, meet minimum standards for worker safety. While hundreds of global brands signed a binding agreement to improve working conditions, many U.S. brands and retailers, led by Walmart, did not, he said.

Francis is not simply extending "a pat on the head" to workers, Trumka said. He is instead challenging them, especially in his environmental encyclical, "Laudato Si', On Care for Our Common Home," to discover how the fate of working people is linked to the fate of humanity and our planet.

The pope "has catapulted the concept of solidarity to the center of the global conversation," Trumka said. In embracing and lifting up working people, he has shown that "we are bound together, that we must look after each other and that as we do so, our own lives will be better."

As AFL-CIO charts its future, alliance with Catholic Church is vital