by Rhina Guidos, Catholic News Service
Justice
This article appears in the Families Separated at the Border feature series. View the full series. 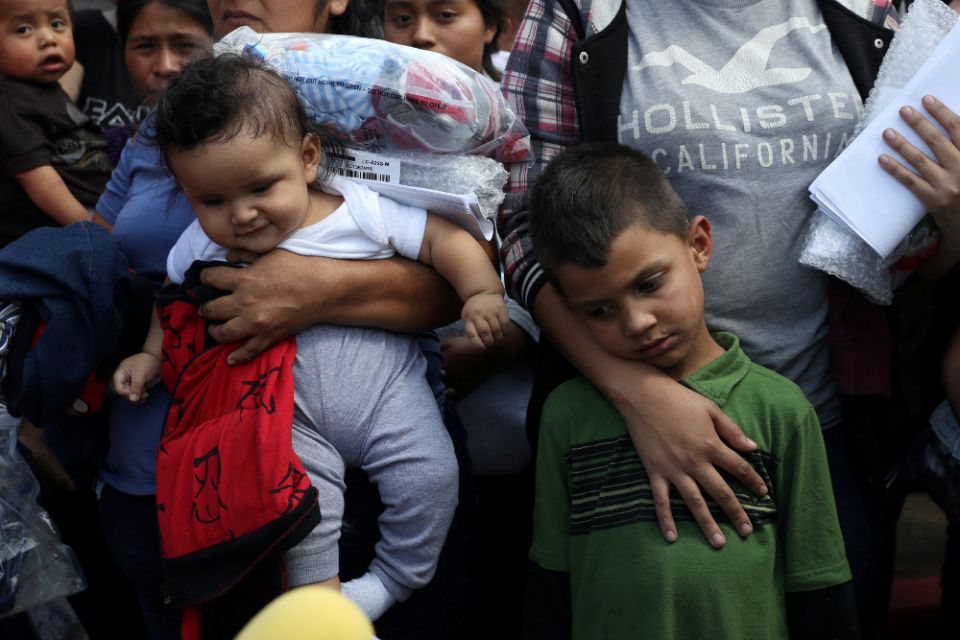 Immigrant children react as they are released from detention at a bus depot June 22 in McAllen, Texas. The U.S. bishops' Migration and Refugee Services and Catholic Charities USA issued a statement July 12 saying their are lending their support to ongoing efforts to reunite immigrant families. (CNS/Loren Elliott, Reuters)

Washington — Some of migrant children under age 5 separated from their families by the government were reunited with loved ones July 9 with help from Catholic organizations.

About two dozen families in all were brought back together on that date with help from the U.S. Conference of Catholic Bishops' Migration and Refugee Services, Catholic Charities USA and a network of other agencies from around the country.

In all, the Catholic agencies will help reunite 55 families by mid-July and provide short-term care, such as food and shelter, said Bill Canny, executive director of MRS.

"Protection of families is a foundational element of Catholic social teaching and this moment calls on all people of goodwill to lend a hand to reunite these children with their parents," said a joint statement issued the same day by MRS and Catholic Charities USA.

The children and families were earlier separated by a policy implemented by the Trump administration at the U.S.-Mexico border, seeking to deter illegal border crossings. U.S. Attorney General Jeff Sessions said in May that people risking improper entry would be subject to having their children taken away, if caught.

The Catholic Church, along with much of the country, condemned the policy and has been advocating for the families' reunification. After much public outcry and widespread condemnation of the family separation policy, President Donald Trump signed an executive order June 20 saying families would no longer be separated but may be detained together during the process of prosecution and deportation at the border.

The U.S. bishops have expressed concerns with that possibility, asking for alternatives to detention, but seemed intent on lessening the damage already done.

Trump administration officials said that 2,342 children had been separated from 2,206 parents at the U.S.-Mexico border between May 5 and June 9 as part of the previous policy.

The families of children under 5 that the Catholic organizations helped were reunited at government facilities and then transferred into the care of Catholic Charities organizations around the country, as well as the Annunciation House in the El Paso, Texas/Juarez, Mexico, border region.

They will be assisted with follow-up care for two months as many will leave the facilities and head toward a destination with family or a sponsor somewhere in the U.S.

Canny said the U.S. Department of Health and Human Services as well as the Office of Refugee Resettlement reached out to the Catholic organizations, as well as the Lutheran Immigration and Refugee Service in early July to help with the reunifications.

"They know we are able to tap into a vast Catholic network across the country, which proves valuable for humanitarian and disaster response," he said.

We should keep fighting for DACA, but DACA is not enough