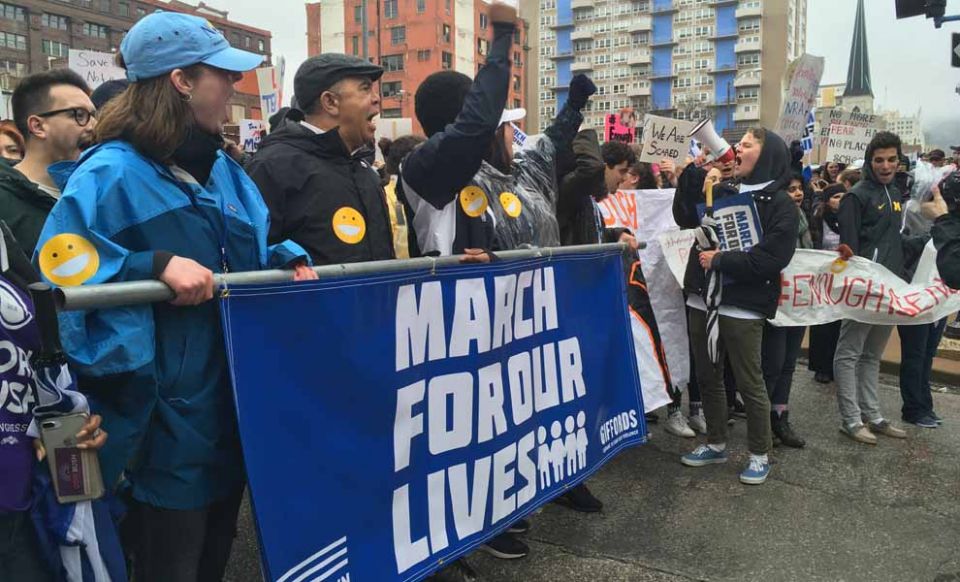 In between homework and track meets, Tyler White spent the better part of the month of March planning a different kind of march — the Portland, Oregon, March for Our Lives.

As part of a team of area student organizers, the senior at De La Salle North Catholic High School co-wrote an op-ed for The Oregonian and appeared with two other students on a local TV news program to speak about the march and the issue of gun violence.

"I'm really just anticipating for the best and planning for the worst," he told NCR before the march that drew approximately 12,000 people to downtown Portland on a rainy Saturday to process from the North Park Blocks to Pioneer Courthouse Square.

White was among a number of Catholic students who assisted in planning some of the more than 800 sibling marches to the national March for Our Lives in Washington, D.C. Together, the events, all held March 24 and taking place in every state, drew at least 1.2 million people, according to two estimates, into the streets to advocate for policy changes to address gun violence in America.

The concept for the D.C. march was conceived by students at Marjory Stoneman Douglas High School, as a way to build momentum for gun reform and other policies to prevent future mass shootings after a former student killed 14 students and three staff Feb. 14 at their school in Parkland, Florida.

White told NCR the actions of the Stoneman Douglas students in the past month inspired him to see what he could do in his own community.

At the Portland march, the senior delivered a passionate spoken word speech titled "A letter to my unborn son":

"A letter to my son.

There was once a time where bullets were exchanged instead of words,

where heads ducked under tables,

teachers instructed in the tone of the hundred of lives lost

on where to hide,

on how to defend,

on how to prepare for the inevitable.

A time where the gatekeepers of our society

had their hands in the pockets

of those more concerned

with the rhetoric of the Second Amendment

and not the seconds it takes to kill."

Tyler White, senior at at De La Salle North Catholic High School, delivers a speech at the march in Portland on March 24; White starts speaking at the 28:20 mark.

For White, the march offered him a way of pushing back against what he sees as the normalization of violence in schools, where active shooter drills and exit route planning are now common, along with the almost rote reaction in America to national tragedies involving guns.

"We all come together, we take to our Instagram accounts or our Facebooks, we put up a hashtag, we send our thoughts and prayers, we send notes and make posters and pass things around trying to make ourselves feel better. But none of that actually addresses the needs of those people whose lives have been forever impacted, and it actually doesn't do anything to solve the issue," he said.

He added that students are tired of that response to shootings, comparing it to "putting past, used bandages on an open wound that is infected." He hopes the march inspires those in elected office or places of power "to do something, to not just applaud us and patronize us for being young people who are civically engaged, but actually act upon it."

De La Salle North, a small school with more than half of its students people of color, joined others across the country in holding a 17-minute solidarity walk March 14, a month after the Stoneman Douglas shooting in memory of those who died. In religion classes, they've also had nuanced conversations about gun control, and about how their backgrounds impact how they come to the issue.

In those discussions, White said he's seen a solidarity of engagement on the issue, even if students don't agree politically, but has also heard throughout them "an undercurrent" of linking what students are doing to social justice.

"It's just a part of the new norm of conversations that I've experienced with my friends and even people that I've met from across the country," he said. 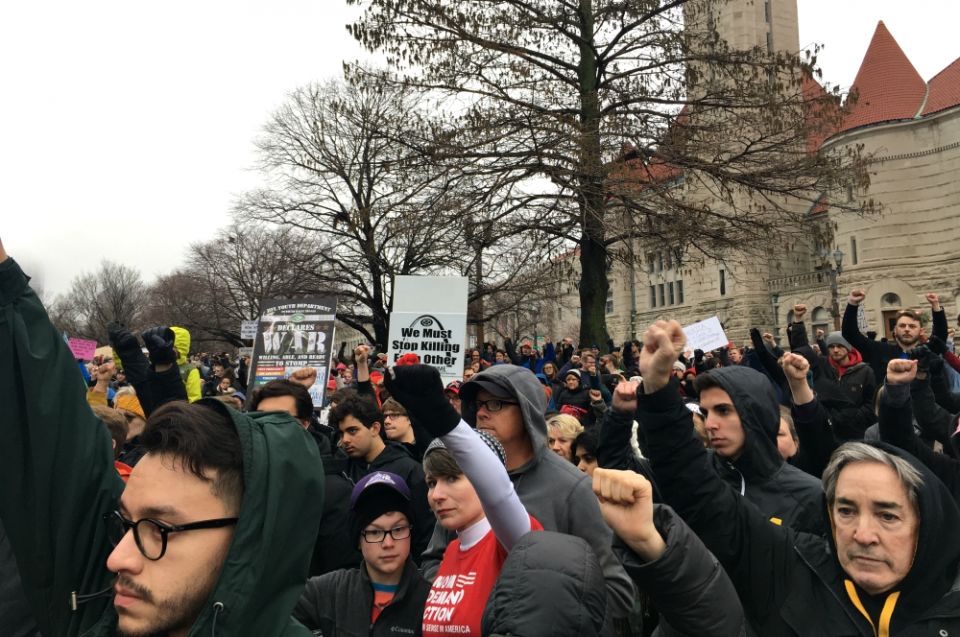 An estimated 12,000 people joined the March for Our Lives in St. Louis, held outside Union Station, on March 24. (James Pollard)

Two thousand miles to the east in St. Louis, Damen Alexander and James Pollard, two seniors from St. Louis University High School, were a part of the cohort leading the March for Our Lives and approximately 12,000 people in a loop around the Midwest city.

With a megaphone in hand, Pollard helped direct the crowd in chants and calling them to actions such as registering to vote and holding their elected representatives accountable. Several of them, including Congressman Lacy Clay, state Rep. Bruce Franks and U.S. Sen. Claire McCaskill participated in the march.

As part of the march, which began in prayer and a moment of silence, they joined their voice to the national call for reauthorizing the ban on assault weapons, but more locally called for opposition to a Missouri House bill that would permit concealed firearms on college campuses and in daycares, churches and bars. Pollard stressed that the march was not anti-gun but rather "is just advocating for a proper use of the Second Amendment."

Each of the students have long had an interest in politics and how their government works. They were also attuned to the violence that has become pervasive in their city, where 205 people were killed last year from a firearm. Pollard was a freshman when Michael Brown, an unarmed 18-year-old black teen, was shot and killed by a police officer in Ferguson, Mo., on Aug. 9, 2014.

Related: After Stockley verdict, Catholics asked to step up to "St. Louis' Selma"

"This is already real for us," Alexander said, responding to a question about how the Stoneman Douglas shooting has impacted area conversations about gun violence. "I don't think it's made anyone aware, but it's made us have a real conversation, like this is happening in our city and we need to do something about it."

Pollard said regardless of how someone views the outcome of the Brown case, where no charges were brought against Officer Darren Wilson, he said the Black Lives Matter movement spurred by it is a response to the violence engrained in the culture.

Added Alexander, "I think people forget behind the numbers, behind the stories, behind all the headlines and all the money that's thrown around, at its core, someone has lost their life. However you try to paint that, whatever you try to say, at the end of the day someone has lost their life, and we should all be angry about it. Period. Full stop." 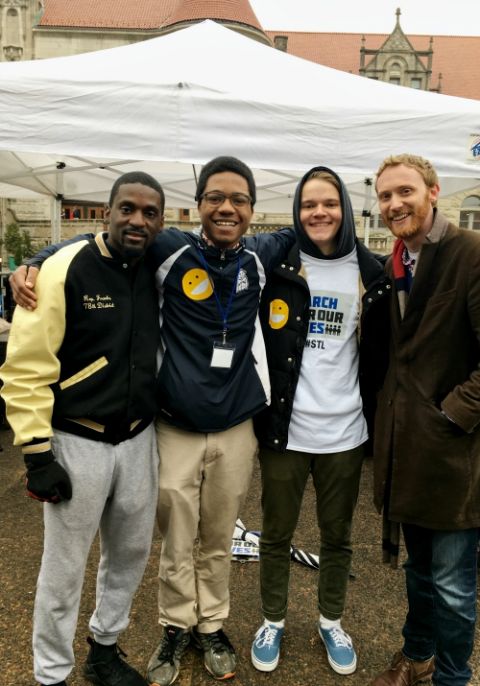 Part of what animates their thinking on violence comes from Catholic social teaching, with Pollard a member of his Jesuit school's Pax Christi club. In particular, they pointed to the idea of human dignity, the theme of the last school year.

"Prayer should motivate us to action," Pollard added.

As they marched for an hour around downtown St. Louis, they saw classmates, teachers and students from other Catholic schools. Still, they see an opening for Catholics to get more motivated in addressing gun violence, particularly given their city's rash of gun deaths, or at least as motivated as they are on other issues concerning life and human dignity.

"This is a pro-life issue, and I wish the pro-life base could get as energized about this as they could about abortion. And I don't know why those two things don't connect with them," Alexander said.

As students nationwide look to continue the momentum beyond the March for Our Lives — another nationwide school walkout is scheduled for April 20, the anniversary of the 1999 Columbine High School shooting — White, of De La Salle North, thinks he and his peers can learn from the "fearlessness" and "dynamism" of the civil rights movement and others of the past, where so too young people played a central role in the push for social change.

That dynamism inspired him to deliver his speech in Portland in spoken word. He also drew from lessons of his parents, who have long reminded him — including the night he ran around the house as Barack Obama was elected president — that he can be anything he wants in part because of the people who sacrificed before them to provide that opportunity.

"I feel like I have to continue that tradition and legacy in a way that lives up to the people who had to face a society and world that was 10 times worse than mine, and to also do something to make this society better for my children and generations to come so that it's 10 times better, too," he said.

What are religious leaders saying online about gun violence?