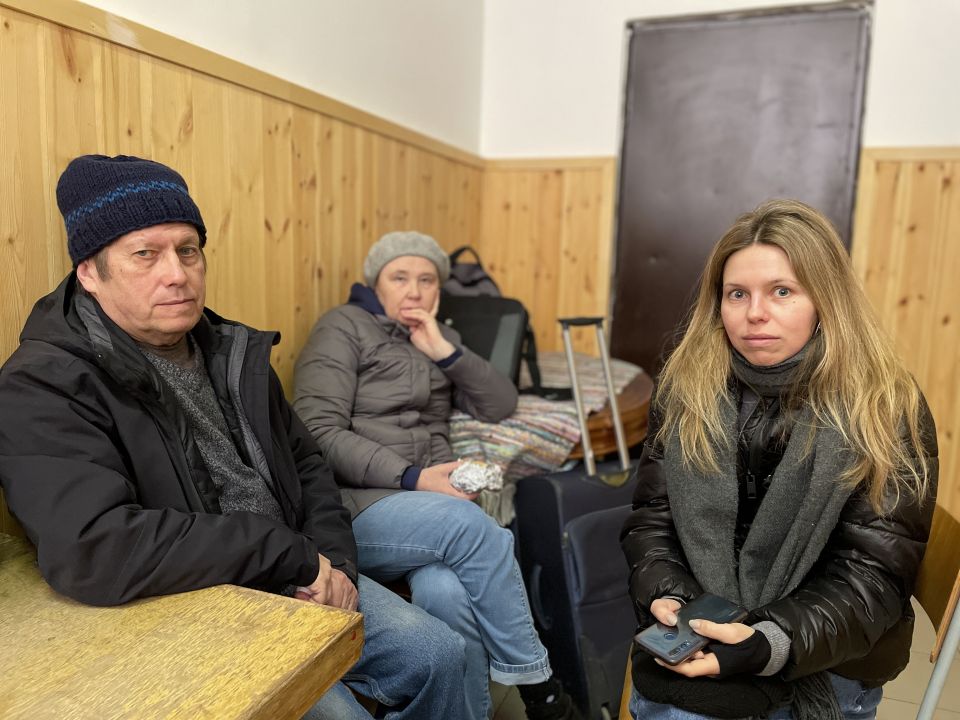 Oleg and Valentina Malakhivska are pictured with their daughter, Iuliia, at a refugee center in Barabás, Hungary, March 11, 2022. (CNS photo/Junno Arocho Esteves)

BARABÁS, Hungary — For Daróczi Gábor, mayor since 2010 of the sleepy Hungarian town of Barabás, making daily visits to the border with Ukraine was the last thing he thought he would have to do during his tenure.

"This is something that I have never seen before in my life," Gábor told Catholic News Service March 11. "It is really strange."

Barabás, a town of fewer than 900 people, had welcomed more than 2,000 refugees since the start of the Russian attack on Ukraine Feb. 24.

The first day refugees started to arrive, "there wasn't any form of organized help. So, the town opened this place to shelter people," he said, pointing to a small building occupied by Caritas Hungary.

"We are trying our best to help everybody, and we're putting our maximum effort to make sure that everybody has food and shelter," Gábor told CNS. "I am hoping for peace between Russia and Ukraine so this situation can end. But until then, we'll do everything that we can to help the people."

Gábor drives several times a day to the border to monitor the arrival of refugees. The soldiers guarding the entrance into Ukraine wave to him as he sits in the parking lot overlooking the border.

Fewer people were coming in March 11 than on previous days because of tighter controls on the Ukrainian side, he said.

Nevertheless, dozens of refugees who succeeded in crossing over during the night and early morning entered the refugee center to rest after the long journey.

A young Nigerian couple who asked to remain anonymous sat on one of the cots set up in the hall. They had traveled from Ukraine's northeastern city of Sumy, one of several cities that were bombed heavily by Russian forces despite a cease-fire.

"We came yesterday. We were staying in Sumy. It was kind of traumatic but at the end of the day we got used to it," the young man said.

His fiancé told CNS the two were studying and working in Sumy before they were forced to leave.

On a normal day, she said, "it's a three-hour journey" from Sumy to the western city of Lviv. "But it took us 12 hours because we were trying to avoid being seen by Russian troops."

While there were reports of discrimination against foreigners from Africa and Asia attempting to leave Ukraine, the young couple told CNS they had "never experienced any discrimination" when leaving the country.

"They were really nice to us in Ukraine," the young man said. "For now, we'll stay here. We're still trying to make some moves but hopefully — 'Inshallah' (God willing) — everything will be fine."

"Nothing is certain but we definitely hope for the best," he added.

An elderly couple from Ukraine, Oleg and Valentina Malakhivska, sat outside the hall, visibly worn out from their journey from a small town on the outskirts of Kyiv.

Their daughter Iuliia, who lives in Zurich, traveled to Barabás to pick them up and take them to her home in Switzerland. Her 37-year-old brother, she said, stayed behind since men between the ages of 18 and 60 must remain to defend the country.

It took some time to convince her parents to flee since they didn't want to leave their son behind, she said.

"A lot of families are like this: a lot of elderly people and mothers with children, who will not leave Ukraine because of their families," Malakhivska told CNS. "And this is difficult because it's better that the older women leave so that the men can fight and there can be less victims in this war."

"That's why I convinced my parents to cross the border and stay with me. That way they can be safe, they can receive medical care and my brother can have less stress and concentrate on the war because he is a telecommunication engineer and he is working 24/7," she added.

Malakhivska told CNS she is saddened by the war in her country and points the finger squarely at Russian President Vladimir Putin who she said had been fixated for a long time on taking back Ukraine.

"The problem is that (Putin) did not want to change his idea and he stuck to the plan," she said. "The economy of Russia is already ruined, but he didn't want to stop and people around him couldn't stop him."

When asked by CNS if she thinks Western sanctions against Russia are enough to change the tide, Malakhivska said she believes sanctions are the only way Russians will "wake up" and see the reality not portrayed in Putin's narrative that downplays the war as a "special military operation."

In Russia, she explained, "the problem is that now, just as it was during the Soviet Union, there is a lot of propaganda."

Malakhivska said her cousin, who lives in Russia, initially dismissed reports of Russian atrocities and said that "she was not interested in politics."

"But once food prices doubled, she started to feel it and started to ask, 'What is the reason? What's going on'" in Ukraine? she said.

In the meantime, Malakhivska said she is making it her personal mission to help people in her homeland, especially those hesitant to leave other family members behind, to escape. But she also feels sympathy for people in Russia who are the unwitting victims of decisions made beyond their control.

"This war is a tragedy for two nations," she said. "Now it's just nonstop bombing, bombing, bombing. People are dying for nothing; civilians, military, for what? For no reason!"