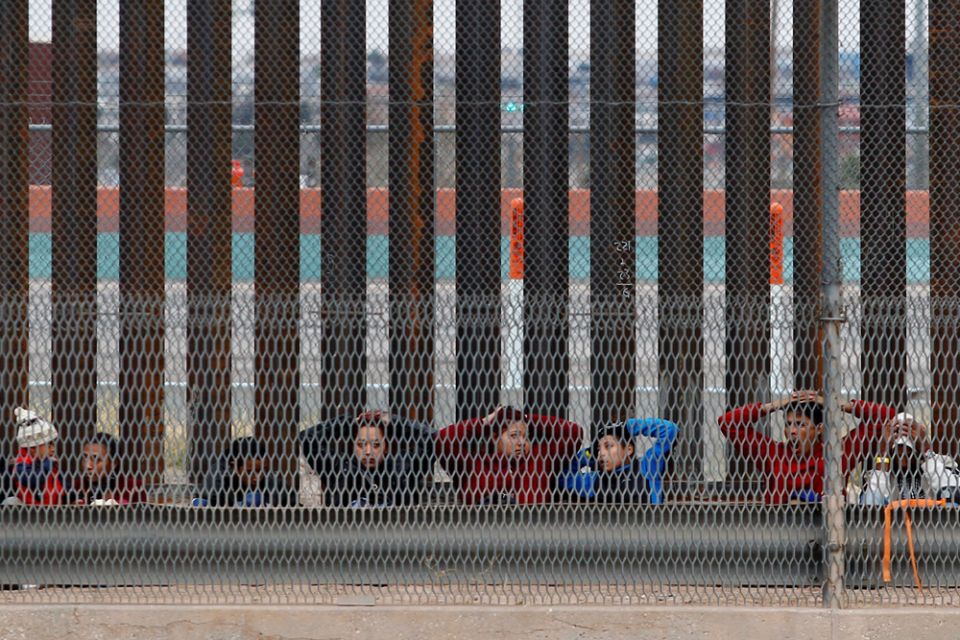 Migrants from Central America are being escorted by U.S. Customs and Border Protection officials after crossing the border from Mexico to surrender to the officials in El Paso, Texas, in this picture taken Feb.10 from Ciudad Juárez, Mexico.

Amid reports of a crisis on the southern border caused by unusual amounts of arriving migrants, Catholic advocates say to look beyond the statistics.

"When we talk about numbers, it's so relative to who's talking about those numbers and what their end goal is in showing those numbers," said Tania Guerrero, an advocacy attorney with the Catholic Legal Immigration Network Inc., or CLINIC.

President Donald Trump's response March 29 to the increasing numbers of immigrants was to cut hundreds of millions in aid to El Salvador, Honduras and Guatemala, which was meant to promote security and development and address the root causes of migration; he also reiterated threats to close all legal ports of entry on the southern border as early as this week.

Instead of trusting government narratives, Guerrero and others suggested, the current situation should be placed in historical context and examined in light of how U.S. policy has failed to adjust to the changing demographics of migrants.

Those familiar with the area say there really is a crisis of resources on the U.S.-Mexican border, but one caused not by the sheer number of migrants, but by U.S. and Mexican responses to families and children that can't be immediately deported.

U.S. policies — such as limiting the number of migrants who are processed at ports of entry each day, forcing asylum-seekers to wait in Mexico while their cases are processed, or failing to address root causes or create alternatives to detention — have contributed to a situation that is overwhelming nonprofits and government agencies alike and creating a humanitarian crisis.

Throughout much of 2018, Trump and his administration portrayed the border situation as an emergency despite migration levels near historic lows (though higher than the previous year.) In February 2019, however, the numbers of migrants who were apprehended by Customs and Border Protection or turned themselves in while attempting to cross between ports of entry really did reach an 11-year-high of 66,450.

An additional 9,653 migrants, nearly half of them families or unaccompanied minors, presented themselves at ports of entry without proper paperwork, some requesting asylum.

Numbers for March will likely be even higher, perhaps reaching 100,000 total migrants seeking to enter without papers, about 90% of them crossing between ports of entry, said U.S. Customs and Border Protection commissioner Kevin McAleenan during a visit to El Paso March 27. He said the immigration system was at a "breaking point."

It's unclear what is leading to the increase, but Guerrero pointed out that the elevated numbers still don't reach the levels the U.S. saw a couple decades ago of over one million per year 19 times from 1983 to 2006 — well over 1.6 million at the high point in 2000 — before levels consistently dropped below 500,000 starting in 2010.

What's different today is that migrants, rather than being mostly solo men traveling from Mexico in search of work, are now largely unaccompanied minors or families with children seeking asylum from Central America. Over two-thirds of those apprehended between ports of entry in February were families or children — the highest on record.

The "care and processing" of family units is a new challenge which the U.S. hasn't adjusted its infrastructure to meet, Guerrero said. "We have double CBP agents than in the '90s but we still are not capable of providing the care needed. We don't have the agency capacity to deal with what's happening on the ground because that's not what's prioritized."

While men traveling alone and looking for work could be processed and deported quickly, migrants who say they fear to return home have the legal right to request asylum no matter how they enter. Those migrants then have to be interviewed to determine if their fear is "credible" enough to warrant a full asylum case, and granted multiple hearings and court dates if it is. 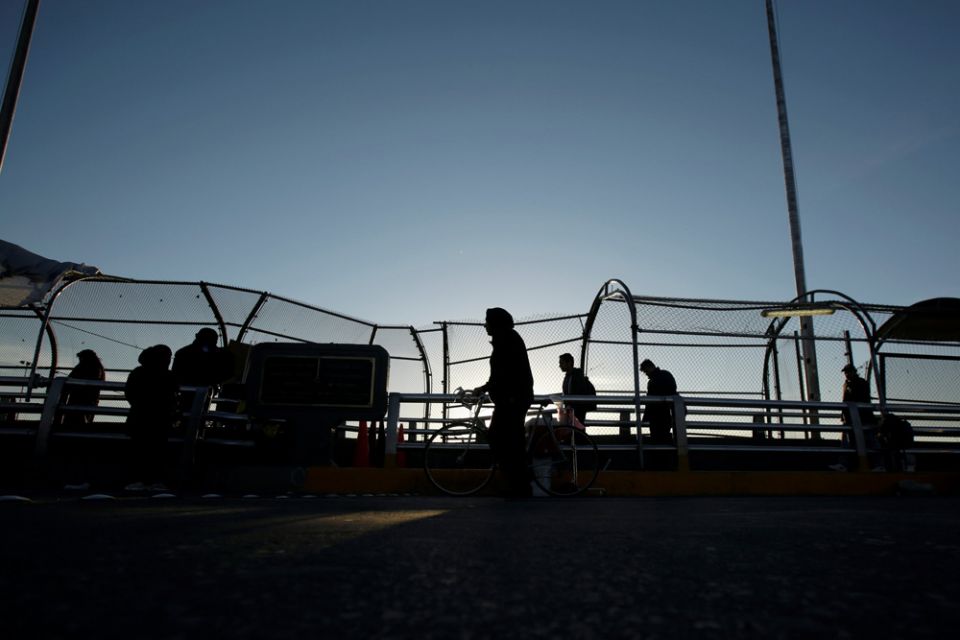 Traditionally, passing a credible fear interview has meant that migrants are allowed to stay in the U.S., whether in detention or outside, until monthslong or yearslong cases are complete. The current administration has favored detention, citing concerns that asylum-seekers with invalid claims won't return for court dates. Capacity limits and restrictions on detention of children have led some migrants to be released anyway.

As a solution to these perceived issues, the administration announced in December 2018 a plan for asylum-seekers to stay in Mexico during the duration of their cases. Known as Migrant Protection Protocols or "Remain in Mexico," the policy was instituted at the port between Tijuana, Mexico and San Ysidro, California (near San Diego) Jan. 25.

It has since been implemented at the port between Mexicali, Mexico, and Calexico, California, starting in early March and between Ciudad Juárez, Mexico, and El Paso, Texas, starting March 20.

A federal judge in California is considering placing a preliminary injunction on the policy after immigration advocates and asylum-seekers filed a lawsuit to block it. The first court hearing was March 22.

Advocates have cited concerns about migrants' safety and ability to access legal aid as they wait in sometimes-violent Mexican border towns. In Tijuana, shelters were already overburdened after a caravan of thousands of migrants arrived to find that U.S. officials had instituted "metering" at the port, a practice where a limited number of asylum-seekers are admitted each day.

"It pretty much grew out of nothing," Marquez said. In the past, Al Otro Lado had conducted similar workshops in the area an average of 12 times a year. The current program, part of the Border Rights Project, operates every day.

"We're talking about getting enough legal experts in one area together to process people individually ... to ask them a series of really complex legal questions," Flores-Marquez said. CLINIC wouldn't typically recommended conducting workshops every day, but "they're doing it every day because it's necessary."

Supplementing a core team with unpredictable volunteer help from law students, lawyers, accredited representatives and others, the hastily constructed program has conducted about 2,100 individual consults for people from 50 countries, with help from more than 1,300 volunteers, Flores-Marquez said in a follow-up email to NCR. "For context, [CLINIC's] affiliates usually plan weeks for a single workshop on the weekends."

"The Remain in Mexico policy has kind of doubled their workload if not tripled it, because it forced them to do a completely different type of consultation which means that they need more time and more staff," Flores-Marquez said.

Migrants who are approaching the border to potentially seek asylum just need a one-time meeting for advice on options and an overview of what to expect. Those who are actually going through an asylum case need much more intensive support, and keep returning for guidance on extremely complex cases.

Guerra's team has "the legal expertise, but they don't have the staff power," Marquez said. "For a volunteer situation that's being held together with paper clips, it's very stressful."

Camilo Perez-Bustillo, director of advocacy, leadership development and research for the Hope Border Institute in El Paso, Texas, worries that his section of the border might soon see the same situation.

Both Perez-Bustillo and Flores-Marquez mentioned that Al Otro Lado legal advocates attempting to commute to Tijuana have been harassed or prevented from entering in what Perez-Bustillo called "collaborative efforts between U.S. and Mexican authorities to make their job difficult or impossible."

As growing migration flows shift to the El Paso sector, which has seen the greatest increases in apprehensions during recent months, and as Remain in Mexico goes into effect there, Perez-Bustillo expects to see extreme shortages in legal aid and shelter space in Ciudad Juárez. He said the city is used to serving as a point of transit, not a longer-term destination for groups of migrants.

In El Paso, the local Customs and Border Protection processing facility was at 395% capacity March 26 and migrants were held in a temporary camp under the Paso Del Norte bridge before being moved to a processing center. Border Patrol has shut down some local highway checkpoints in order to free up more agents to process migrants.

Trump has threatened to shut down more of the border soon if illegal migration doesn't stop, though that would halt legal travel and commerce without stopping people from claiming asylum between ports of entry.

"What's clear on the ground is that humanitarian resources on both sides of the border, the shelters and the networks that work with the shelters, are stretched beyond their limits, and I think CBP's only response is to turn people away or to improvise solutions" such as the bridge camp, Perez-Bustillo said. Meanwhile, they ask for more resources "to simply do more of what they've already been doing, none of which addressees the root causes."

"If the U.S. wants to play this game and if the Mexican government wants to play along, which is what seems to be happening, then they both have to take responsibility and provide targeted assistance to the communities on the Mexican side of the border that are going to bear the brunt of this," Perez-Bustillo said.

Access to U.S. attorneys, in particular, will be difficult to come by without help. "Basically, the wall is going to get in the way. … Resources are not going to flow across unless governments facilitate that," he said. "It's a huge need, and I think that's evident to anyone who looks at the situation seriously."

Advocates and nonprofits have stepped up efforts to coordinate humanitarian aid on both sides of the border and to ensure someone is keeping an eye on human rights issues in the U.S. and Mexico, but Perez-Bustillo said the private sector can't do enough to meet the need without government aid.

He thinks the two governments are playing a dangerous game by letting the consequences unfold, "but there's a limit. And I think we're going to be at that limit soon."

There's no "national emergency" due to threats from migrants, "it's that there are people at the northern triangle of Central America that are facing grave levels of danger and violence — reasons for them to flee," Guerrero added. "They're not herds of people that deserve to be tear gassed. ... We should listen and we should react with compassion and with levels of intelligence that are expected of us as the U.S."

Justice | Look past the stats: Catholic advocates fault US policies for border crisis

EWTN's hateful 'The World Over' sides with Trump on immigration