by Christopher White
Justice
People
This article appears in the Pope Francis in Canada feature series. View the full series. 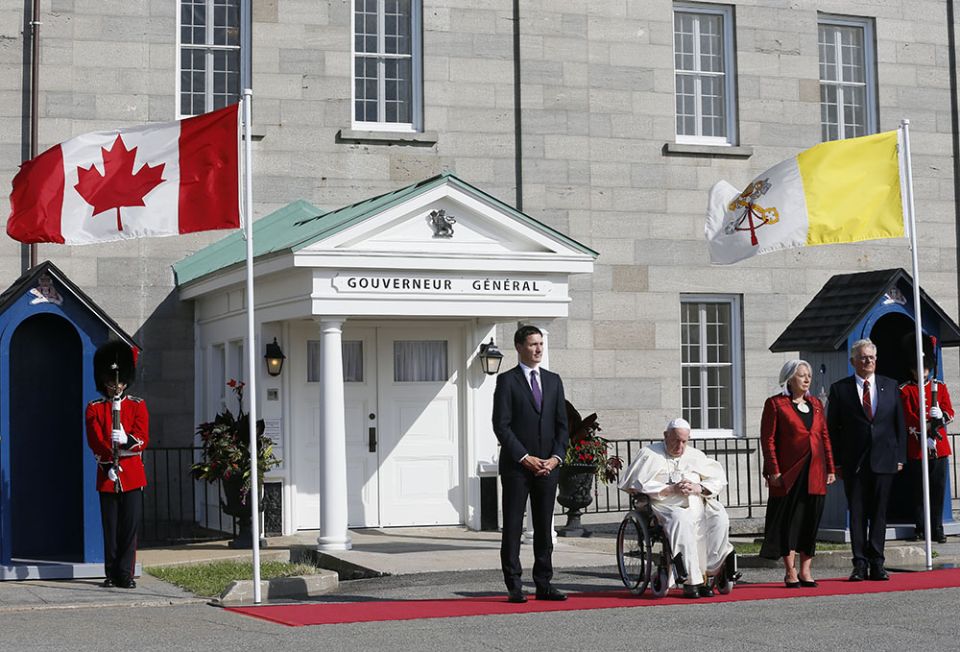 "In the past, the colonialist mentality disregarded the concrete life of people and imposed certain predetermined cultural models," said Francis. "Yet today, too, there are any number of forms of ideological colonization that clash with the reality of life, stifle the natural attachment of peoples to their values, and attempt to uproot their traditions, history and religious ties."

The pope's remarks came during his first public speech after arriving here in the French-speaking province of Québec at the residence of the governor general during his weeklong tour of Canada.

In the presence of Prime Minister Justin Trudeau, who first invited the pope to Canada in 2017 to apologize to the Indigenous peoples, and Governor General Mary Simon, Francis both paid tribute to Indigenous values, while warning that some of the country's policies hindered the commitment of the Indigenous to communal life and particularly, their concern for the elderly and sick.

Throughout his papacy, Francis has repeatedly railed against "ideological colonialization," criticizing wealthier states imposing their values on others, and more recently, has linked the concept to "cancel culture," which he has described as a forced homogenization of ideas and practices.

In Québec on July 27, Francis doubled down on that criticism, saying, "The result is a cultural fashion that levels everything out, makes everything equal, proves intolerant of differences and concentrates on the present moment, on the needs and rights of individuals, while frequently neglecting their duties with regard to the most weak and vulnerable of our brothers and sisters: the poor, migrants, the elderly, the sick, the unborn."

"They are the forgotten ones in 'affluent societies,'" the pope said, in a thinly veiled criticism of Canada's legalization of both abortion and medical assistance in dying, which permits euthanasia if a person has a "grievous and irremediable" medical condition.

The pope also cautioned that the "cutthroat" and "individualistic" nature of modern life and economic structures posed real threats to the family unit, which he said was a signature strength of Indigenous communities.

"The Indigenous peoples have much to teach us about care and protection for the family," he said. "Among them, from an early age, children learn to recognize right from wrong, to be truthful, to share, to correct mistakes, to begin anew, to comfort one another and to be reconciled."

Said Francis: "May the wrongs that were endured by the Indigenous peoples serve as a warning to us today, lest concern for the family and its rights be neglected for the sake of greater productivity and individual interests."

The pope also said it was "scandalous" that in a country as wealthy as Canada that some of the worst poverty levels are among its Native peoples, many of whom are unable to purchase homes, complete their education or receive adequate health care.

Despite his broadside against many of the country's progressive bona fides, the pope went on to praise Canada's commitment to the environment and multiculturalism, specifically lauding its global leadership in accepting refugees from Afghanistan and Ukraine, and elevating these efforts as strengths and a means for the country to continue to evidence Indigenous values.

Throughout his remarks, the pope repeatedly invoked the image of the maple leaf, the national symbol of the country, present on its flag and on many products and buildings.

As the pope reached the midpoint of his Canadian tour — fulfilling a central demand of the country's 2015 Truth and Reconciliation Commission report to apologize for the residential schools on Canadian soil — he again expressed his "deep shame and sorrow" for the church's involvement in running the schools, which broadly sought to forcibly assimilate Indigenous peoples.

"It is tragic when some believers, as happened in that period of history, conform themselves to the conventions of the world rather than to the Gospel," he said, reiterating his plea for forgiveness that he first made in Alberta on July 25.

To date, however, Francis has yet to return any of the Indigenous artifacts currently held by the Vatican Museums or make any specific comments on the opening of historical archives of residential schools, both of which many Indigenous leaders have called for as a concrete sign of the pope's commitment to reconciliation.

Francis will continue his tour of the country on July 28, leading a public Mass at the Basilica of Sainte-Anne-de-Beaupré and holding a meeting with the Canadian Catholic bishops.