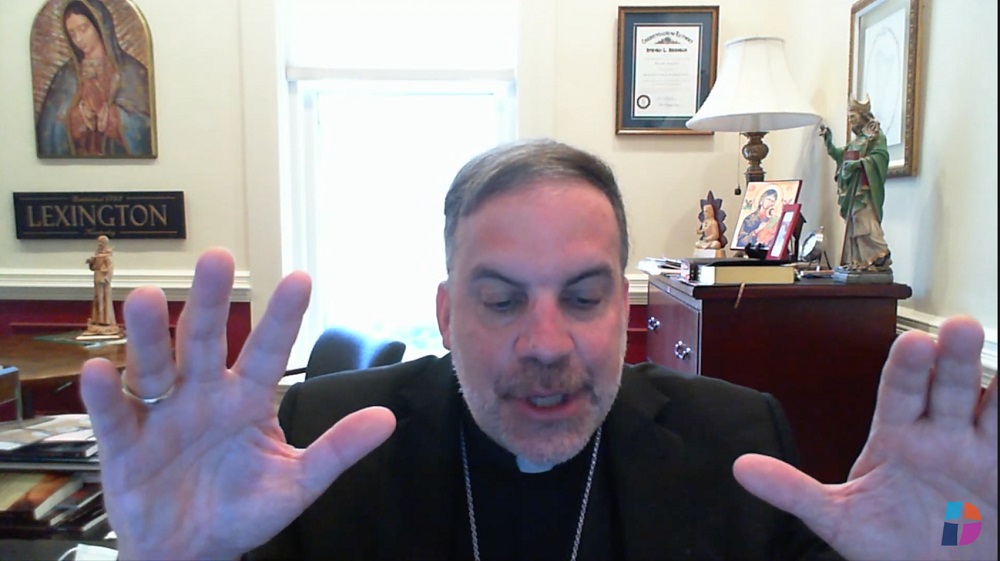 Bishop John Stowe of Lexington, Kentucky, one of the most vocal U.S. Catholic prelates in support of the LGBTQ community, offered a blessing during the virtual Catholic Pride Blessing on June 1. (NCR screenshot)

Less than three months after the Vatican issued a decree forbidding priests from blessing same-sex unions, nearly two dozen U.S. Catholic leaders and organizations kicked off the celebration of Pride month with a blessings service for LGBTQ Catholics.

"God is inviting you to draw near and that God desires a deep and intimate relationship with all of you," Bishop John Stowe of Lexington, Kentucky, told the virtual participants of the Catholic Pride Blessing on June 1.

"May God, the source of life and love, fill you with the joy of knowing your great dignity and worth as God's child, who was created in love and filled with blessings from the first moment of your existence," Stowe continued.

Stowe, one of the most vocal U.S. Catholic prelates in support of the LGBTQ community, was joined by a number of leaders from Catholic advocacy groups and national LGBTQ rights organizations. The event was organized by DignityUSA; co-sponsors included NETWORK Lobby for Catholic Social Justice, the Institute Leadership Team of the Sisters of Mercy of the Americas, the National LGBTQ Task Force, Human Rights Campaign, the Tyler Clementi Foundation and the Women's Ordination Conference.

"In many ways, we have the Congregation for the Doctrine of the Faith to thank for sparking this event," said DignityUSA vice-president Meli Barber at the start of the event, in reference to the Vatican ban on blessing gay unions in March.

"In Germany, over 100 Catholic churches held blessings for same-sex couples. Bishops have questioned the wisdom of the responsum. We heard from many Catholics, in our town halls, on social media, and through other channels, that they disagreed with the Vatican," she said, highlighting the global backlash over the decree. "We thought we’d offer a way for people to come together in celebration of the inclusive church and world we are all working to build, and you all responded with enthusiasm."

During the service, the leadership team of Families with Dignity, a Catholic ministry supporting LGBTQ families, paid tribute to the queer community for its special contribution to the arts, resiliency in the face of bullying and rejection and a willingness to adopt children in need.

"We bless you who transform the rejection you receive from others into loving care and compassion for those in need," the leadership team prayed during the event.

In addition to the Vatican's tersely worded decree that God "cannot bless sin," 2021 has yielded mixed results in terms of the institutional Catholic Church's relationship with the LGBTQ community.

In January, nine Catholic bishops, including a cardinal, signed on to a joint statement released by the Tyler Clementi Foundation — a group that fights anti-LGBTQ bullying in schools and faith communities — that affirmed "all people of goodwill should help, support, and defend LGBT youth." Since its release, another six bishops have added their name to the statement, along with scores of Catholic religious orders, schools and organizations. At the same time, the U.S. bishops' conference has opposed an executive order by the Biden administration extending federal nondiscrimination protections to LGBTQ people.

In Rome, on Monday, the U.S. Embassy to the Holy See posted a photo online of the Pride flag displayed outside the embassy in Rome, marking the beginning of Pride month. "The United States respects the dignity and equality of LGBTQI+ people," stated a tweet from the embassy's official account. "LGBTQI+ rights are human rights."

As the virtual service neared its conclusion, DignityUSA's executive director Marianne Duddy-Burke offered attendees a blessing of encouragement: "Go with pride, which is not sin for you, but salvation."