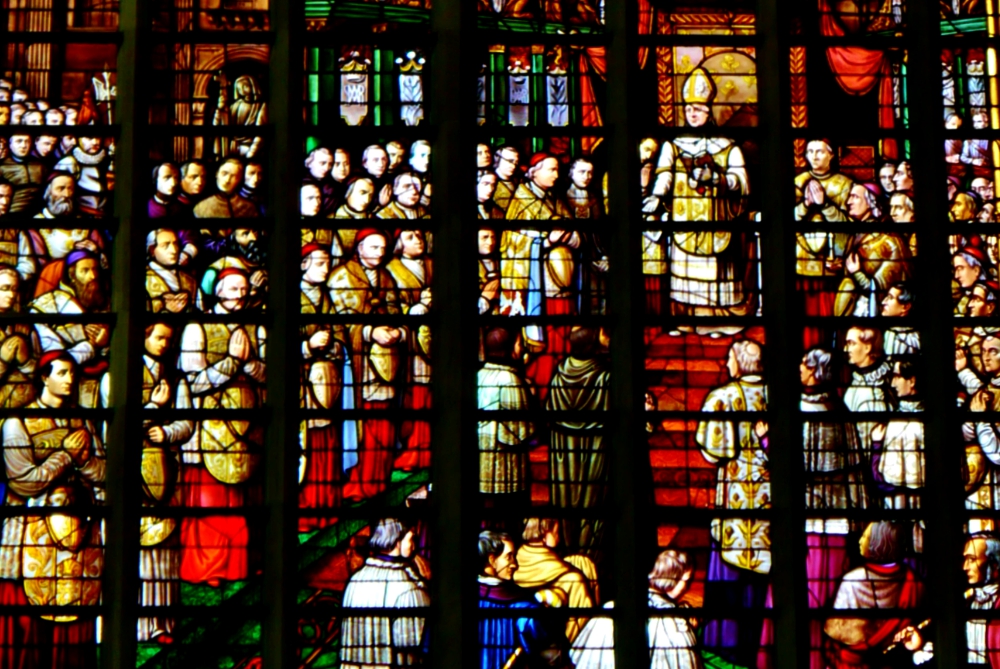 Michael Leach is, by all the wonderful and positive connotations of the term, a mensch. He is that rare soul whose very bearing announces, without words, "It's OK." He is one of those who, amid the current ecclesial maelstrom, still knows the way to the deep wellsprings of tradition — not the faux orthodoxy of recent decades, the tick lists of dos and don'ts, of exclusionary language and excommunication fiats all trailed by a cappa magna.

He has access to the real stuff, the way to a God who doesn't fit those narrow proscriptions and boundaries. And, as publisher emeritus of Orbis Books and editor and publisher of more than 3,000 books, he seems always to have the right words — and just enough of them. His contribution to contemporary Catholic thought and spirituality is breathtaking.

This is why I allowed his latest offering to pester me from my desk for months, long after other offerings would have been pushed aside with the understanding that I'd never get to them. I knew Leach (and friends) was worth the wait. The book, Soul Seeing: Light, Love, Forgiveness (Orbis, 2018) takes the title from a column that Leach has been overseeing in NCR for about the past eight years. You'll forgive the self-referential nature of this, but this material is about the Catholic reality that makes the staying worth the struggle. And his friends (42 others join Leach in this collection) are among the very best Catholic writers and thinkers of the era. He really does know, after all, good writing.

His original description of intent for the column sums it nicely: "This biweekly column is about seeing God, the world, and ourselves with the eye of the soul. It is not about changing the world but changing the way we see the world. Each column is a spiritual reflection on the beauty that hides behind appearances and the peace that is beyond all understanding."

I encourage you to give it a look. It will, in the words of one of my favorite pastors, "give you a little lift to God." And we all need that.

The quote is from W.H. Auden's The Age of Anxiety and I ran across it in Franciscan Fr. Richard Rohr's Breathing Under Water: Spirituality and the Twelve Steps. I had revisited that book recently because more and more I think of the crisis in the church as one in need of the wisdom of recovery literature and the particulars of 12-step programs.

For nearly three and a half decades, I, by dint of occupation, have been an up-close observer of the activity of leaders of this institution, some of whom are so addicted to privilege and power they have at times appeared ecclesial contortionists. They become distorted beyond recognition in their attempts to avoid the inevitable "bottom" that precedes genuine recovery.

So we on the outside of their culture for years have used a phrase to try to express in simple language the central issue: "They don't get it." Which morphed over decades into some version of: "How can it go on this long, and they still don't get it?"

Like other addicts, they do get it. Bishops understand the destruction; they know that everyone else can perceive something is radically wrong; they make more and more elaborate gestures as time goes on to assure everyone that they do get it. Apologies follow apologies; new institutional devices are piled upon new institutional devices — boards and commissions and studies are heaped on new resolve upon new resolve.

At the same time, they make sure the most disturbing realities remain secret. Secrecy is the addict's protection from the truth.

All of that activity sets things in the right direction. It gets some things accomplished. However, the anxiety and ambivalence felt in the pews (check recent polls about falling confidence in the church and its leaders and about the rise of the number of "nones") grow from an understanding that all of those projects still don't translate into "they get it" at the level of the heart, of conversion. We on the outside are left understanding that so many members of the hierarchy remain stuck in the frantic phase of trying to demonstrate how much they get it. So many have yet to "climb the cross of the present" and allow their illusions to die.

The Catholic clerical culture is largely that caste of enablers who have clung to the artifacts of privilege even as the structures around them totter from the effects of their own corruption. In the last Connections column, I wrote about the increased use of the term and referenced a piece recently posted that was written by Fr. Mark Slatter who described the culture in part as "like seeks after like." He posited, "The psychology engenders webs of kinship among priests, bishops and similarly disposed lay groups, bishops and cardinals, wealthy lay Catholics and think tanks."

I received a number of responses, but one especially I'd like to pass on here. It is from Jesuit Fr. James Keenan, Canisius professor and director of the Jesuit Institute at Boston College. He picked up on Slatter's line that "hierarchical culture is the gold carrot for those predisposed to its allurements."

He goes on to hone the point (emphasis in the original):

Hierarchicalism is that culture precisely at the center of the more recent sexual abuse scandal. Just as clericalism gave us the scandals from 2002, hierarchicalism gave us the more recent scandal: witness Pell, McCarrick, Finn, Barbarin, the Chilean Bishops, Franco Mulakkal (the Indian bishop accused of raping the religious women), etc. The hierarchical culture has greater power and greater networking capabilities than clerical culture. We need then to distinguish the two, not because clericalism is not pernicious, it is, but because we have to understand better the viciousness of the culture more isolated and protected than the clergy's and certainly more complex, insidious and driven than we know or acknowledge.

The final sentence is one to contemplate. That distinct and severe description of hierarchicalism, coming as it does from a responsible individual inside the clerical culture, is authoritative. At the same time, it raises a host of questions. Can the excavation go deeper to expose the particulars that inspire such descriptions as "vicious," "isolated," "protected," "complex," "insidious" and "driven"?

I hope Keenan goes a lot further in unpacking his ideas about hierarchicalism. The Catholic community deserves to hear more of the conversation. And I hope he keeps us informed of any further work he's doing.

A version of this story appeared in the April 5-18, 2019 print issue under the headline: A church in recovery, a culture examined.