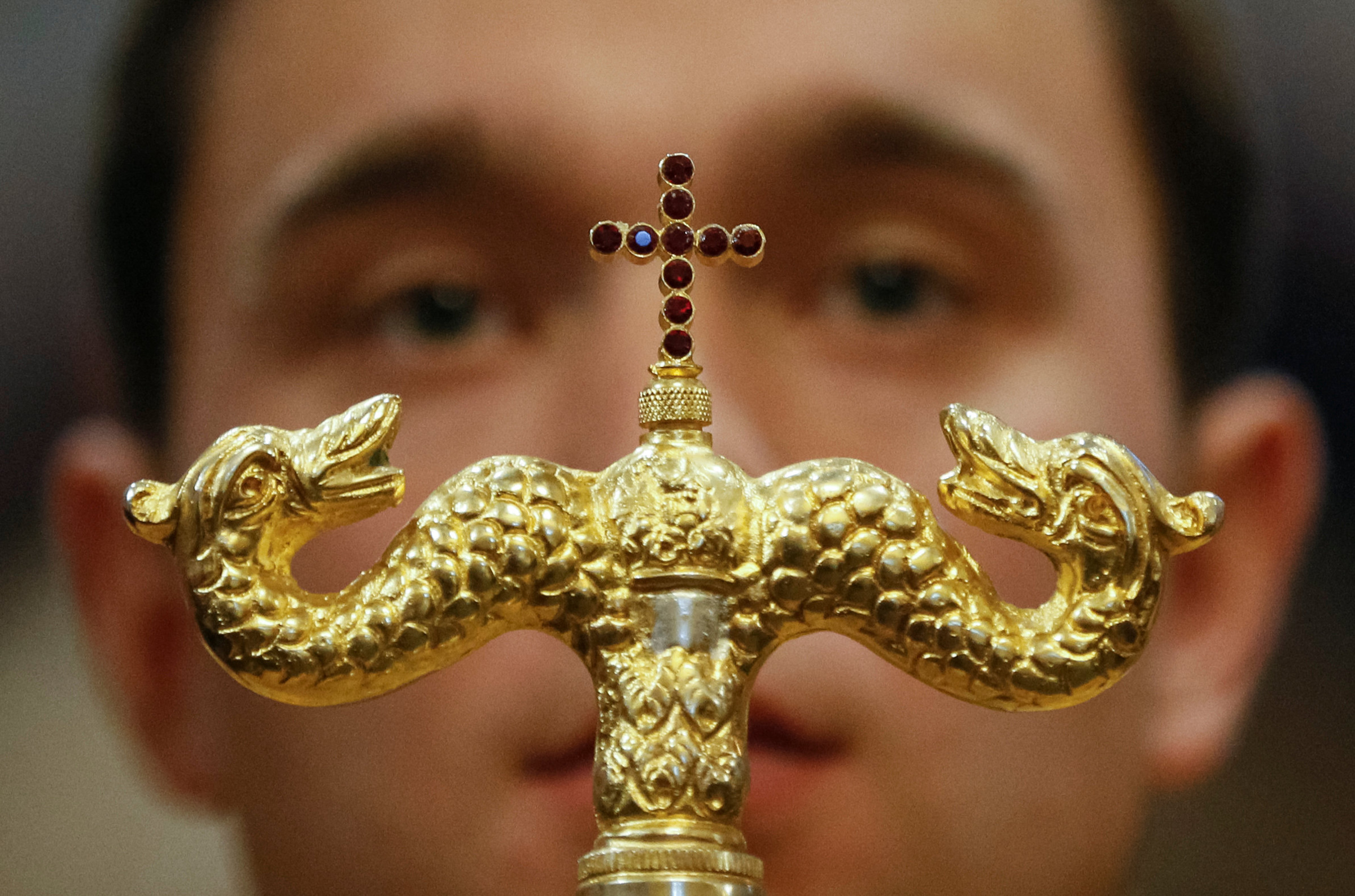 A clergyman of the Orthodox Church of Ukraine attends a Dec. 16, 2018, liturgy at St. Michael's Cathedral in Kiev, Ukraine. (CNS/Valentyn Ogirenko, Reuters)

When the primate of Ukraine's independent Orthodox church was formally enthroned in early February, there were hopes for some easing of the bitter atmosphere over the new church's break with Russia's Moscow Patriarchate.

With Russian Orthodox leaders rejecting the new church and cold-shouldering the ecumenical patriarchate for approving its creation, the feud looks set to continue and intensify in the run-up to Ukraine's crucial presidential elections on March 31.

Yet Catholics in Ukraine and Eastern Europe remain optimistic that the Orthodox Church of Ukraine, once up and running, could herald a turn for the better in ecumenical relations.

"This church will certainly differ markedly from Russian Orthodoxy by supporting Ukrainian society's pro-European aspirations and being more open to the outside world," said Marcin Przeciszewski, director of neighboring Poland's Catholic Information Agency, KAI. "But much will depend on how effectively it avoids negative publicity and distances itself from the kind of forceful emotions which play into the hands of Russian propagandists."

Speaking at his Feb. 3 enthronement in Kiev's St. Sophia Cathedral in Ukraine, the 40-year-old Metropolitan of Kiev and All Ukraine, Epiphanius Dumenko, stressed that the "doors of our churches" were open to everyone and pledged "cooperation and dialogue with other churches and religious organizations."

His commitment was applauded by Ukrainian President Petro Poroshenko, attending alongside other officials, who said hopes were now pinned on Epiphanius to reconcile Ukraine's hitherto divided Orthodox communities, together accounting for about 70 percent of its some 44 million inhabitants.

However, at the end of January Russia's Patriarch Kirill denounced the new church and assured a Moscow audience that Russian-Ukrainian unity would outlast "temporary political schemes."

Meanwhile, despite Poroshenko's pledges that the new church will be independent from the state, Russian President Vladimir Putin accused Ukrainian politicians of "exploiting religion in a struggle for power," and said his government would "reserve the right" to intervene if pro-Russia Ukrainians faced harassment.

"Profiteering, politicking and parasiting on religious matters divides people and provokes anger and intolerance," Putin told the same audience at the Moscow ceremony. "This is precisely the kind of project, a totally false struggle for power unconnected with any faith, now being conducted in Ukraine." 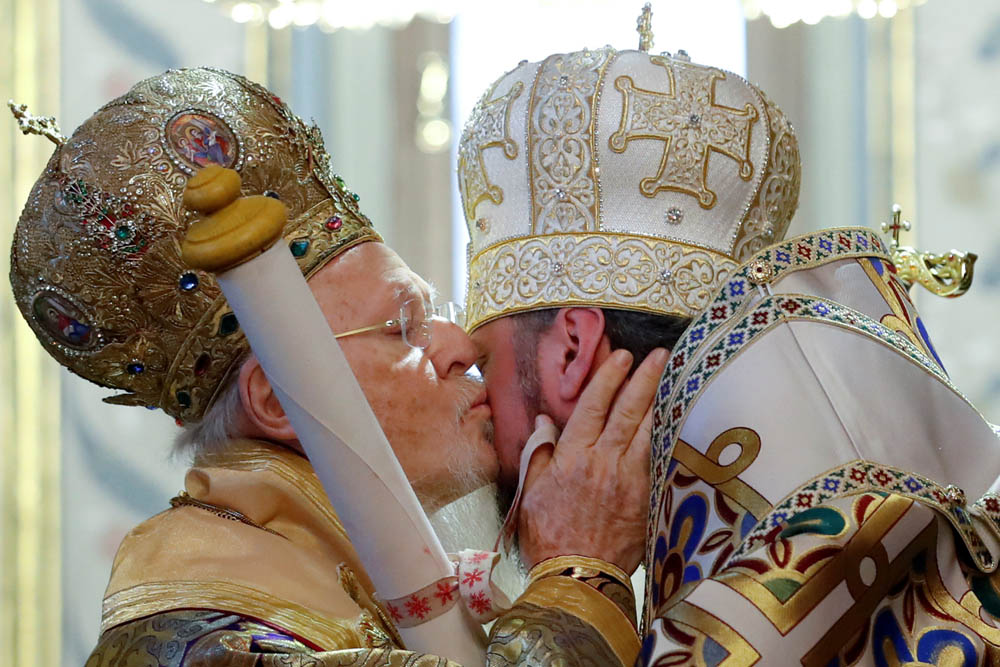 Shevchuk told Ukrainian television he'd already agreed on a "roadmap for cooperation" with the new Orthodox primate, which will include education, charity work and shared liturgies, as well as help for victims of the Russian-backed separatist war still plaguing eastern Ukraine.

"Our Christian unity provides a necessary platform for our national, social and state unity, and will enable us to oppose all external forces which aim at destroying our identity and common statehood," he continued. "While we cannot change history, we can now build our future."

For now, Roman Catholic leaders, fearful of Russian sensitivities, are holding back, while Catholic aid groups are also taking care not to be drawn into the inter-Orthodox dispute. 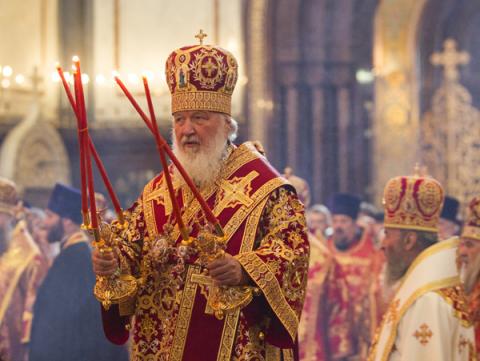 Russian Orthodox bishops celebrate the Divine Liturgy at the Cathedral of Christ the Savior with Patriarch Kirill of Moscow May 24, 2017, the feast of the Ascension. (CNS/Robert Duncan)

"Epiphanius and Shevchuk are both relatively young and clearly open to understanding and collaboration," the Polish expert told NCR. "Their two churches also clearly share a link with Ukrainian independence and national identity, which gives them a natural space for dialogue when the Vatican and other Catholic communities are having to wait."

Kirill severed all links with Ecumenical Patriarch Bartholomew I, honorary primate of the world's 300 million Orthodox, after Bartholomew decreed an end in October 2018 to the Moscow Patriarchate's 332-year jurisdiction over Ukraine, and recognized the country's breakaway Orthodox communities instead.

Undeterred, Epiphanius was elected primate at a Dec. 15, 2018, Unification Council in Kiev and handed a "Tomos of Autocephaly," or decree, by Bartholomew on Jan. 6, formally establishing the world's 15th main Orthodox church. 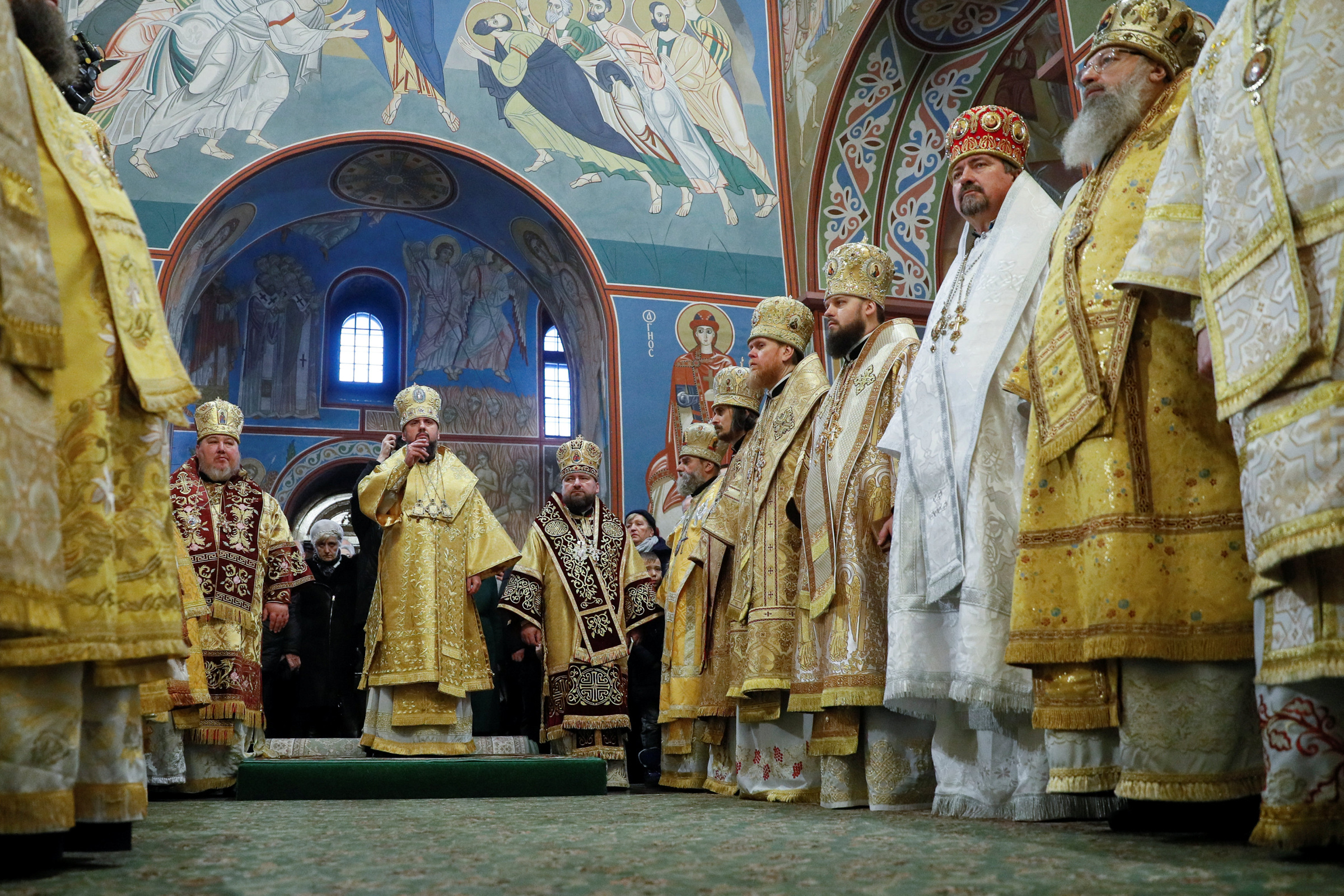 New laws, passed by Ukraine's parliament, the Verkhovna Rada, require the Moscow-linked church to choose a new name denoting its ties to Russia and establish procedures for parishes wishing to switch allegiance to the new Orthodox Church of Ukraine.

By late February, the church said it had already amassed 7,000 parishes, mostly in western and central Ukraine, including 400 of the 11,000 previously loyal to the Moscow Patriarchate.

Although only two of the Moscow-linked church's 90 bishops attended the December Unification Council, prominent clergy have since defied sanctions threats and changed sides as well.

In a nationwide poll, while 38 percent of Orthodox Ukrainians preferred not to specify their affiliation, 44 percent declared support for the new church, compared to 15 percent still identifying with its Moscow-linked rival.

Much now depends on the attitude of other Orthodox churches and how soon the new Ukrainian church can be brought into ecumenical contact with the rest of the Christian world.

Interviewed in late January by Greece's Ta Nea news agency, Epiphanius said he had notified Orthodox prelates abroad of his appointment and counted on an especially "good and productive relationship" with Greek Orthodox leaders, given his own Ukrainian church's "move in the direction of Greek tradition."

Besides Greece, church leaders say they hope to be recognized by 11 Orthodox communities under the ecumenical patriarchate's direct jurisdiction, as well as by the churches of Cyprus and Romania and some of Orthodoxy's five historical patriarchates.

However, Orthodox leaders from Serbia, Antioch and Poland have vowed to refuse recognition, while others, such as Georgia and Bulgaria, have declined to take positions.

In late February, the Orthodox synods of Cyprus and Romania disappointed Ukrainians by urging the Ecumenical and Moscow Patriarchates to pursue an agreement rather than offering full relations with the new church.

And when a Ukrainian Orthodox delegation, headed by Bishop Pavel Juristyj of Odessa, visited Greece's Orthodox center of Mount Athos, some of its 20 monasteries were said to have heeded a letter from Russia's Hilarion, urging them to bar their gates.

Supporters of the new church, such as Nicholas Denysenko, an American theologian, have praised Epiphanius for bringing Orthodox rivals together in the face of fierce hostility and have urged him to dispel fears his church could provide a vehicle for Ukrainian nationalism.

While counseling patience, supporters also urged Epiphanius to counter Russian claims that independence means separation and isolation by mounting a media and public relations effort to show his church is open to reconciliation and communion with others.

Above all, supporters called on the new church to give itself a strong foundation in Bible teaching, strong preaching, social engagement and lay participation.

"Metropolitan Epiphanius has sounded a lot like Pope Francis in his statements. … When much of the Orthodox world isn't wanting dialogue with Christians of other denominations and other faiths, the church in Ukraine would contribute greatly if it led ecumenical dialogue," Denysenko told Ukraine's Religious Information Service at the end of December. "This is a good opportunity to put the post-Soviet legacy aside once and for all and become a leading church of the 21st century." 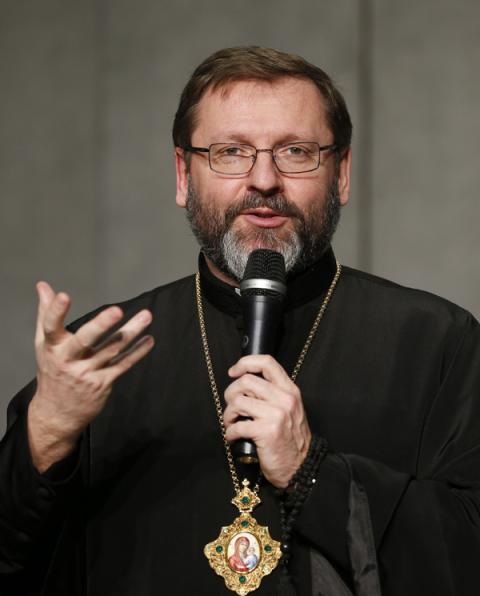 Some Catholics are also hopeful a new model of Orthodoxy could be in the making.

Shevchuk, the Greek Catholic leader, has praised the "search for universal unity between Catholic and Orthodox churches" now underway in Ukraine as being "very dynamic," even hinting, in an interview with the Ukrainian Glavcom news agency, that Francis might visit to help Kiev become "a powerful center of global Christianity."

This may not be entirely fanciful.

Epiphanius, the new church's primate, was trained in Greece rather Russia and has vowed to revive the independent traditions of Kievan Christianity, which stayed aloof from the bitter East-West conflicts following the 1054 Great Schism and contrived to remain in touch with both Rome and Constantinople.

The ancient Kiev Metropolis existed under the Ecumenical Patriarchate's jurisdiction for seven centuries until its transfer to the Moscow Patriarchate in 1686. With that historic transfer now annulled under Patriarch Bartholomew's October decree, the new Orthodox Church of Ukraine will have a chance to resume its role as an East-West bridge.

This will give it much in common with Ukraine's Greek Catholic church, which forged its own East-West identity over the same period in the teeth of fierce Russian Orthodox opposition.

"The Kiev church was never a hostage to the political interests of state power and never served the mighty of this world — it remained the soul and conscience of its people," Shevchuk, the Greek Catholic leader, told Ukrainians in a January pastoral letter. "Today, with our Orthodox brethren, co-inheritors of that Kiev church, we are called to rediscover this common treasure, to study and develop it as the precious foundation of our spiritual unity."

Once fully organized, the new church of Ukraine will be Orthodoxy's third largest, after those of Russia and Romania, making it a key novel force in world Christianity. This makes it essential for Catholics to forge ties as soon as possible.

"Thanks to the ecumenical patriarchate, the church is now fully autocephalous and canonical and it's inevitable that recognition and acceptance will follow," Przeciszewski told NCR. "Though it won't offer newness in liturgy or doctrine, its presence in society and role in Europe could bring something original and hopeful. But to achieve this, it will also have to show restraint, and remain calmly confident that time and the future are on its side."

For now, though, the stakes remain high.

In late February, Ukraine's security service, the SBU, accused Russian agents of paying arsonists to attack buildings belonging to the Moscow-linked Orthodox church in a bid to stoke claims of persecution, while the Religious Information Service of Ukraine reported that Moscow Patriarchate bishops had threatened to send in gangs to take back defecting parishes.

Russia's Interfax news agency said a Moscow-linked metropolitan, Mitrofan of Gorlovka and Slaviansk, had been detained by Ukrainian police "on suspicion of separatism," while another bishop, Gedeon Kharon of Makarov was arrested at Kiev's Borispol Airport and stripped of his Ukrainian passport after urging members of the U.S. Congress to help stop the "violation of religious freedom."

Both Epiphanius and Shevchuk have barred their clergy from taking sides in Ukraine's March 31 presidential election, while warning against the dangers of populism and violence.

But with Poroshenko, the new church's patron and protector, currently trailing third and facing determined pro-Russian challengers, the tensions look set to increase.