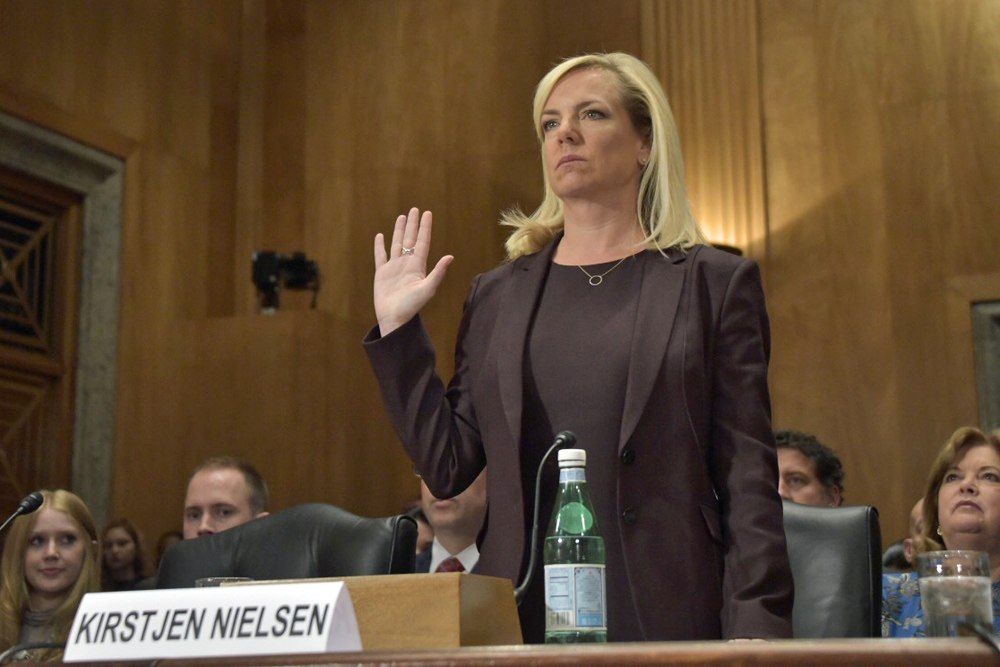 Former Secretary of Homeland Security Kirstjen Nielsen's dedication to the president's immigration agenda led her policies to fail from both a humanitarian perspective and an enforcement perspective, said immigrant advocates.

Rather than taking a multifaceted approach to addressing the hundreds of thousands of immigrants who seek to enter the U.S. without permission each year, Nielsen, who headed the Department of Homeland Security from her confirmation Dec. 5, 2017, to her resignation April 7, tried to carry out President Donald Trump's vision through harsh enforcement-focused tactics.

While alarming Catholic immigration advocates, and many others, with policies that included separating families, making it more difficult to seek asylum and sending troops to the border, Nielsen also failed by Trump administration standards when she couldn't curb unauthorized migration during her less-than-18-month tenure.

Despite numbers near historic lows when Trump took office, the number of immigrants apprehended while seeking to enter the U.S. without papers between ports of entry hit a nearly-12-year high this March, prompting talk of a crisis at the border.

In response, Trump has indicated he wants to take immigration policy in a "tougher direction," replacing Nielsen and other Homeland Security leaders with officials willing to take an even more extreme approach.

On April 5, he pulled his nomination for U.S. Immigration and Customs Enforcement director, acting head Ronald Vitiello, before pushing for the removal of Nielsen and her second-in-command Clare Grady in order to replace them with U.S. Customs and Border Protection Commissioner Kevin McAleenan as acting DHS secretary.

But advocates say efforts at intensified enforcement may face legal challenges and will still be ineffective.

Policies under Nielsen already include:

The Trump administration has "been really absent in their vision and in their thinking about addressing root causes and about creating avenues for really desperate people to migrate" legally, said Donald Kerwin, executive director of the Center for Migration Studies of New York. 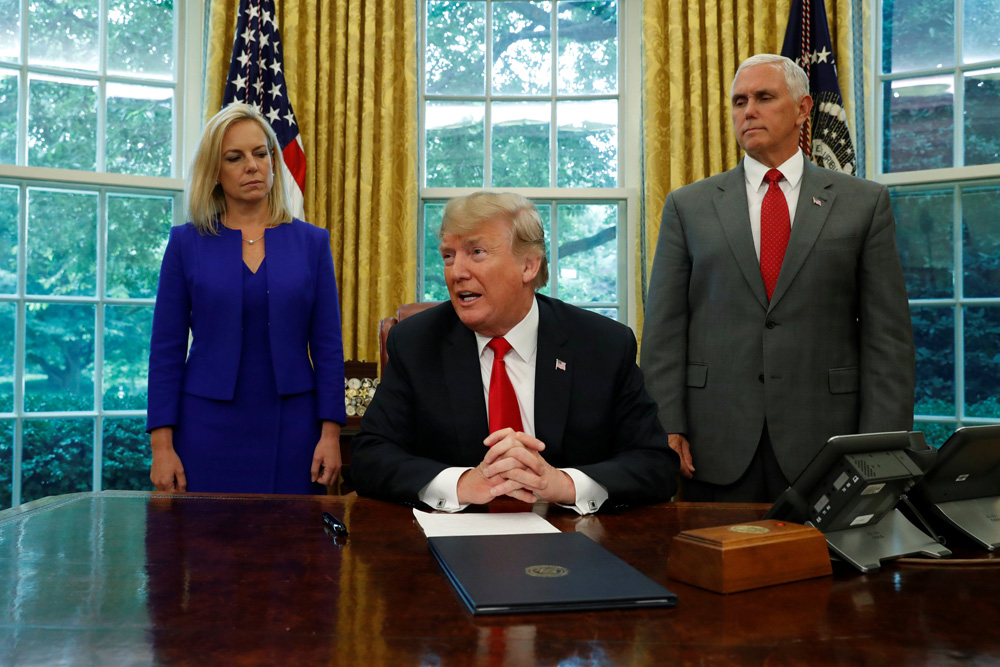 President Donald Trump is seen with Secretary of Homeland Security Kirstjen Nielsen and Vice President Mike Pence June 20, 2018, at the White House, prior to signing an executive order to halt the separation of families. (CNS photo/Leah Millis, Reuters)

Some Catholic advocates said Nielsen already pushed the legal limits of immigration enforcement, and that there's little anyone can do to intensify those border security efforts, several of which have already been blocked due to challenges in the courts.

Kerwin said administration officials "can't do a lot more at the border than they've been doing" short of policies that would be obviously illegal.

"I cannot imagine how her successor can do anything within the law to make things worse for these asylum seekers," agreed longtime Catholic advocate Kevin Appleby in an email to NCR. "She exhausted all the enforcement options, including the cruel family separation policy."

But during an America's Voice press call April 10 on family separation and what the administration might be planning next, Ur Jaddou, the director of an America's Voice project called "DHS Watch" that exposes concerning Homeland Security policies, listed several policies that are reportedly being considered, including:

These prospective policies are especially alarming given the suffering already caused by Trump administration policies and their failure to alleviate the border crisis, several advocates on the call noted.

Nielsen "will forever be associated with implementing and defending" the earlier version of the family separation policy, "which was a historical low in U.S. immigration policy," Appleby said.

Under the "zero tolerance" policy, which led to the family separation crisis last summer, Nielsen's department referred for prosecution everyone who crossed the border without permission, including those exercising their legal right to request asylum. This led thousands of children to be separated from their parents since they couldn't accompany them to criminal jails.

Backlash to this policy was so strong that Trump signed an executive order to end large scale family separation June 20, 2018.

In the cases of both family separation and temporary protected status termination, Nielsen argued that she was merely following the law but Kerwin said her interpretation of the law differed dramatically from that of previous Democratic and Republican administrations.

Temporary protected status grants temporary protection from deportation and permission to work to certain immigrants who would otherwise be undocumented, but who come from countries that are too dangerous to provide for their safe return.

Unlike previous administrations, Nielsen and Acting Homeland Security Secretary Elaine Duke, who served until Nielsen's confirmation, refused to consider in their renewal decisions country conditions other than the conditions that prompted the original protected designation.

Duke and Nielsen's combined decisions ended the status for over 310,000 people from six countries, more than 97% of those covered before Trump came into office, against objections from Catholic advocates and others who said the countries were still dangerous.

While challenges in the courts have temporarily halted all temporary protected status terminations, many immigrants who have been in the country for decades are still uncertain of how long they will be allowed to stay in the U.S.

The temporary protected status decisions are just one case of DHS under Nielsen removing protections even while being presented with evidence from multiple government sources that doing so would only fuel more unauthorized migration, Jaddou said.

This trend is all the more frustrating because solutions are available — working with regional partners and the U.N. refugee agency to address root causes, modernizing ports of entry, bringing more trained asylum officers and other professionals to the border and supporting alternatives to detention with a proven record of ensuring people attend court dates, she added.

There are solutions, Jaddou concluded, "but this administration is not interested in them. It seems they're interested in something else, in obtaining some political points with the base of their party to support Trump's next election."