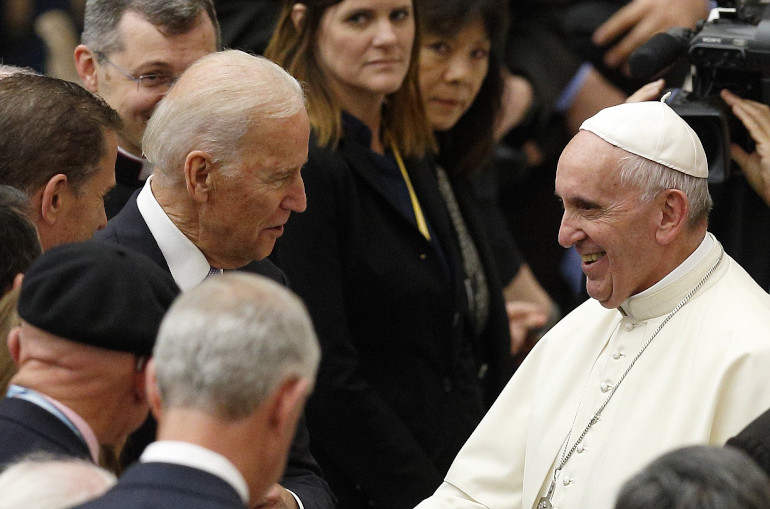 Then-U.S. Vice President Joe Biden meets Pope Francis after both leaders spoke at a conference on adult stem cell research at the Vatican in this April 29, 2016, file photo. (CNS/Paul Haring)

Pope Francis did not meet U.S. President Joe Biden today, June 15. Despite conservative media reports to the contrary, it does not appear the pope ever planned to do so.

Biden has been in Europe since June 9 for his first trip abroad as president, taking part in a summit of G7 leaders in Britain over the weekend before hosting meetings with NATO and European Union officials in Brussels, Belgium, on June 14-15.

During the afternoon on June 15, the president was due to travel to Geneva, Switzerland, for a hotly anticipated encounter the next day with Russian President Vladimir Putin.

To hear the EWTN-owned Catholic News Agency tell it, Biden was to make a quick stopover in Rome to meet with Francis on the way from Brussels to Geneva. A few immediate problems with that story: Rome is not on the way to Geneva (it is about 550 miles further south). And there is no evidence to show that such a meeting was ever on the agenda.

CNA originally reported on the possibility of a Biden-Francis meeting on June 3, citing unnamed Vatican sources. The outlet doubled down on the story June 14, reporting in a piece without a named author that the meeting would be happening on June 15, but Francis had nixed plans to celebrate Mass with Biden, a Catholic.

More problems: Come mid-morning in Rome, no meeting had taken place. Pedestrian traffic on Via della Conciliazione, the street leading into the Vatican, was not sealed off for security as it nearly always is when high profile visitors come calling on the pope. (When President Donald Trump met Francis in 2017, barricades were put up for blocks around the Vatican.)

By mid-day, Emily Zeeberg, a public affairs officer at the U.S. embassy to the Holy See, told NCR: "President Biden has no plans to visit Rome or Vatican City this week." Archbishop Paul Gallagher, the Vatican's foreign minister, also told NCR he had "no knowledge" of plans for such a visit between Biden and Francis.

The feeling among other sources at the Vatican and U.S. officials in Rome about the reports of a Biden visit was something like an emoji shrug. Why would Biden come now, especially when he is already due to travel to Rome in October to attend a summit of the G20 leaders?

Papal meetings take time to prepare, and Biden has not even named a U.S. ambassador to the Holy See yet.

Of course, the unsourced reports of the un-occurring presidential meeting with Francis came as Biden's Catholicism has been in the national spotlight. The U.S. bishops are preparing to hold a virtual meeting June 16-18, at which they will discuss a document about whether pro-choice Catholic politicians like Biden should be able to receive Communion.

It might be noted that the June 14 story from Catholic News Agency claiming Francis had canceled plans to celebrate Mass with Biden was lauded in an email to journalists from the Benedict XVI Institute, a San Francisco-based outfit that in recent weeks has been sharing press releases from Archbishop Salvatore Cordileone.

Cordileone, San Francisco's archbishop since 2012, has been among those in the U.S. bishops' conference leading efforts for the new document about pro-choice Catholic politicians, even after the head of the Vatican's doctrinal congregation asked the prelates to proceed with caution on the plan.

In a May 26 release amplified by the Benedict XVI Institute, Cordileone said he had been "deeply grieved" by other bishops who suggested the conference might postpone the plan, given the Vatican's concerns.

By afternoon on June 15, CNA had amended a correction to its story about Biden's supposedly planned papal Mass. The report, they said, had been made "erroneously."

A version of this story appeared in the June 25-July 8 print issue under the headline: No, Pope Francis did not cancel a meeting with President Biden.