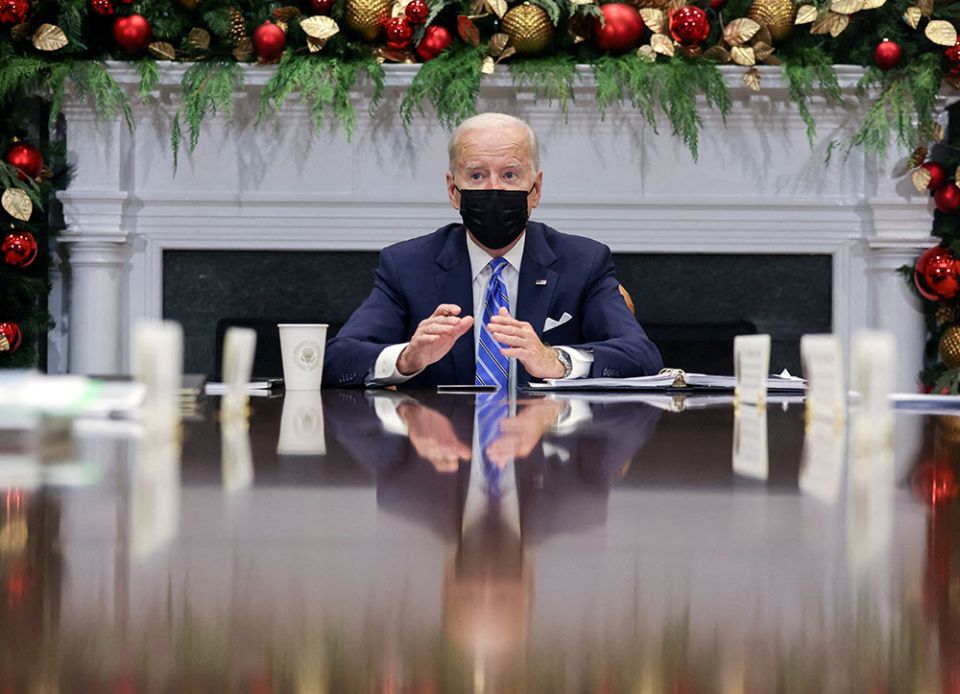 President Joe Biden meets with members of the White House COVID-19 Response Team from the White House in Washington Dec. 16, 2021, about the latest developments related to the Omicron variant. (CNS/Reuters/Evelyn Hockstein)

The principal political story of 2021 was President Joe Biden's attempt, mostly unsuccessful, to get the country back to normal. But the rhythm of the year was one of one step forward and one step back, sometimes two steps back, in a way that made progress seem far off. This fitful rhythm applied to both quotidian politics and to the deeper currents of America's political culture.

Standing in Biden's way were obstacles, some manmade and others not, all of which resulted in the fact that at year's end, even those of us who mostly approve of the job Biden is doing worry that it has not been enough and that democracy remains as threatened now as it was one year ago.

If progress seemed far off, the threat seems palpable that, in thinking democracy can be protected with half-measures or by standing aside and not posing difficult questions, democracy may soon be forfeited, as it was in Europe in the 1930s, when politicians there tried to protect it with half-measures or by hoping if they kept their heads down, all would turn out well, that the fascist dictators who had consolidated power couldn't be all that bad.

The new year began with hope that the country could finally turn the page on the ugly chapter that is Trumpism. Within the first week, that hope took a hit: On Jan. 6, we watched in horror as a mob overran the Capitol, attempting to disrupt the counting of the Electoral College votes and the certification of Biden's election. After order was finally restored, Congress completed its work late that night.

Fourteen days later, the inauguration of the nation's second Catholic president had a redemptive feel to it. The west front of the Capitol, which had been a crime scene so recently, was now the backdrop for a different, and very Catholic scene. A Jesuit priest began the ceremony with prayer, the new president quoted St. Augustine in his speech, a new young Catholic poet wowed us all, and Lady Gaga, also a Catholic, sang the national anthem. The only thing that could have made the day more Catholic would have been starting with a Mass. That's right: They did start with a Mass, at my old parish St. Matthew's.

Biden's term began as the COVID-19 vaccine was just becoming available. As winter snows melted, it seemed like the virus might also melt away as more and more Americans got jabbed. Biden set a goal of 100 million jabs within 100 days, and the country surpassed that, hitting the 200 million mark by day 92. The White House projected confidence that at the rate things were going, COVID-19 would soon be behind us. 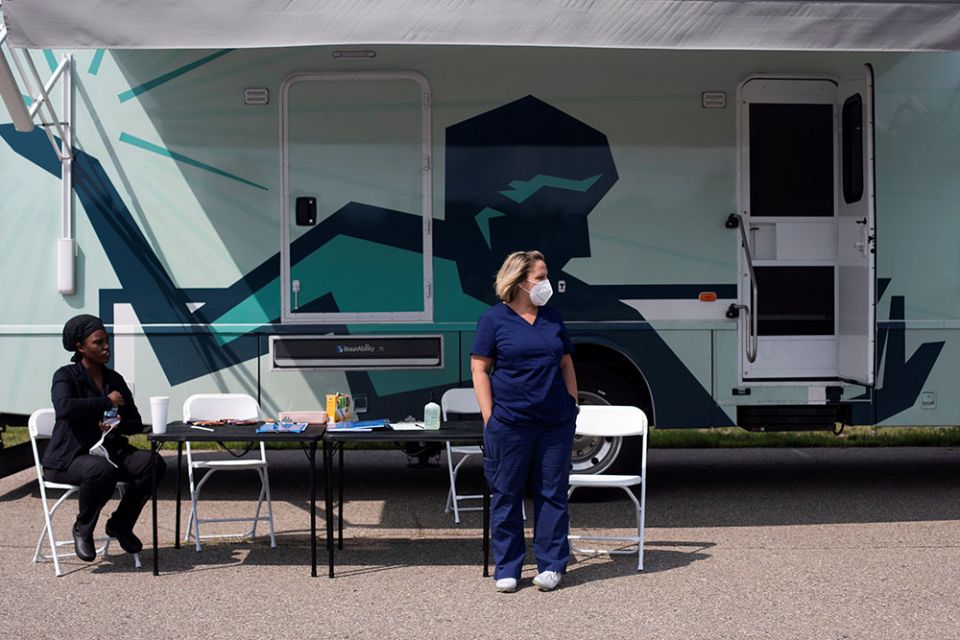 Nurses in Detroit wait for people to come by to receive their COVID-19 vaccine at a mobile pop-up vaccination clinic hosted by the Detroit Health Department with the Detroit Public Schools Community District July 21, 2021. (CNS/Reuters/Emily Elconin)

Then the vaccination rates dropped off dramatically and it became apparent that a significant proportion of Americans did not want to get the vaccine. Egged on by the talking heads at Fox News, which still sets many of the talking points for populist conservative politics, refusing the vaccine became part of the Trumpian psychology.

Flying their "Don't tread on me" flags, and spouting all sorts of conspiracy theories, a significant number of Americans warm to the idea of saying no for the sense of psychological satisfaction it provides, not because that no coheres with any particular political philosophy. The Trumpian approach has more in common with Howard Beale's "I'm as mad as hell, and I'm not going to take this anymore" rant in the movie "Network" than with the vision of participatory democracy articulated by the Founding Fathers.

Biden and the Democrats have still not fashioned a meaningful response to this inchoate, inarticulate rage. Worse, Republicans who know better have, with a few notable exceptions like Rep. Liz Cheney, refused to stand up to the bully from Mar-a-Lago.

That Republican cowardice, too, became obvious as the year wore on. The Republicans go along with Donald Trump's efforts to rig future elections. They refuse to cooperate with the Select Committee investigating the brutal insurrection that nearly cost some of them their lives. Most refused to sign on to the infrastructure bill, which is the legislative equivalent of refusing to put up a Christmas tree.

As the Build Back Better bill appeared to be shelved last week by Sen. Joe Manchin's unwillingness to proceed, it is important to remember the one, undeniably bright spot this year: the passage of that bipartisan infrastructure bill. Nineteen Republican senators joined all the Democrats in sending the measure to Biden's desk for signature. But it was the exception that broke the rule. Mostly, Senate Majority Leader Mitch McConnell and the Republicans put denying Biden any victories ahead of any desire to rescue the country.

Dysfunction in Washington still helps the Republican brand, even if it also makes Trump's return to politics more likely to succeed. That is the kind of miscalculation Italy's King Victor Emanuele III made when he invited Benito Mussolini to form a government. The Republican leaders have learned nothing from the 2016 primaries, when each candidate thought they were the ones to beat Trump, but they simply diluted the anti-Trump vote and he breezed to the nomination.

The Democrats also needed to keep their focus on the lunch-bucket issues that got Biden elected in the first place, but that is difficult when your own vice president lists her pronouns on her Twitter account, as if her gender identity had ever been in question. In addition to the liberal cultural zeitgeist, amplified on Twitter, the looming reality that Roe v. Wade's days were numbered made it impossible for Biden to keep the culture wars at bay as he had done so successfully during the campaign. Political strategist David Shor warned the Democrats that they are dangerously out of touch in their messaging. They seem incapable of listening.

Republicans are brilliant at tagging all Democrats with whatever is the most radical idea floating on the left. In Virginia's governor's race, Democrat Terry McAuliffe was made to look like he was a member of the Squad. He stupidly suggested parents, better known as voters on Election Day, shouldn't tell schools what to teach their children at a time when Republicans were successfully making school curricula an issue. And both he and Gov. Phil Murphy of New Jersey foolishly thought they could ride the abortion issue to victory.

At the tectonic level of American political culture, there was some decidedly good news for the Democrats generally, and especially for those of us who see American politics through the lens of Catholic social doctrine. The so-called "Great Resignation" of 2021 saw workers refusing to take low-paying, high-stress jobs, while many unions went on strike to demand higher wages and/or better working conditions, taking advantage of the tight labor market to improve their situation. Wages are up and are heading higher, even as inflation eats into some of that wage growth. 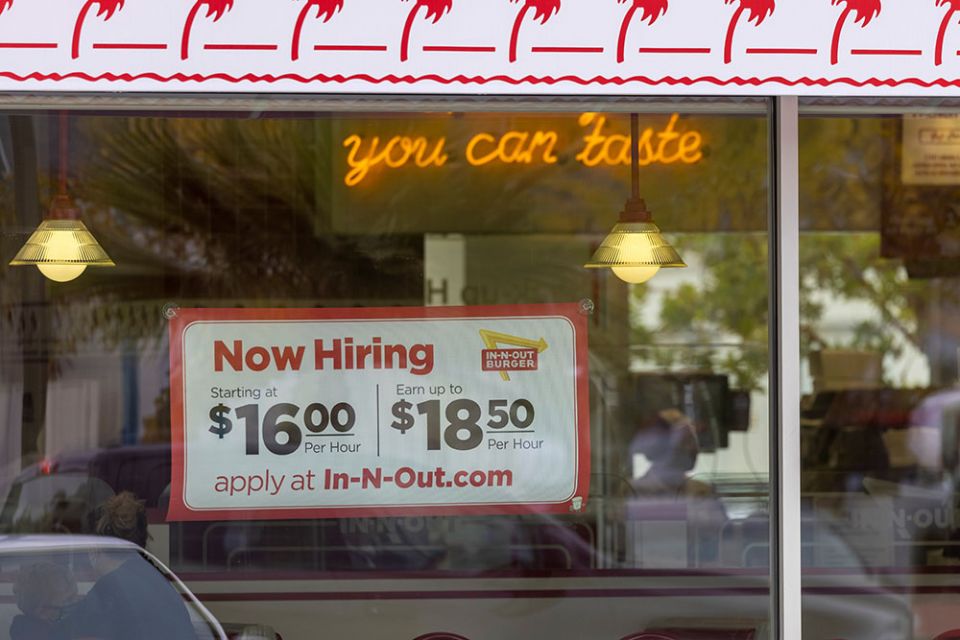 An In-N-Out Burger in Encinitas, Calif., advertises for workers May 10, 2021. (CNS/Reuters/Mike Blake)

The tectonic shift that is most promising for Republicans is their gains among Hispanic voters. A recent poll showed Latino voters evenly split between the two parties, and while that survey had a small sampling and is likely a bit of an outlier, the result tracks with other data, including Trump's improved showing among Latino voters (and Black and Asian voters too) in 2020.

The tectonic shift that worries me the most is the radicalization of a significant part of the electorate. I pass "F--- Joe Biden" signs every time I drive to the store, alongside the still-flying Trump flags, and I do not recall any such reaction after Barack Obama beat John McCain or Mitt Romney. The violence on Jan. 6 may have been a culmination of Trump's efforts to steal the 2020 election, and it might also have been an experiment in how to use violence to overturn election results, as the Los Angeles Times recently warned.

For years, Democrats said if they could only get the disaffected citizenry to the polls, they would win. It turns out that a significant number of the disaffected Americans were activated by Trump, not Bernie Sanders.

The frustrating inability to get back to normal on the domestic front was mirrored in foreign affairs. The talks to restart the Iranian nuclear deal are not going well, and how could they when the Iranians know that Trump could be back in power in a few years? The same goes for our once strong alliances with other democracies around the globe.

The one overwhelmingly popular move, the withdrawal of troops from Afghanistan, appeared botched, even though there was likely no good way to pull that off. People remember the deliverance of so many British troops at Dunkirk, not the many who died on the beaches, but Dunkirk wasn't televised live.

And so the year ends with a sense of possibilities, some fulfilled and some frustrated. Biden's essential decency will not be enough to stave off the typical loss of seats in Congress by the president's party. It won't be enough to save democracy. As the new year comes to a close, the hopes of those who cherish America's historic calling to be a beacon for freedom and democracy have been tempered by a year of disappointment and rising threats.

One lesson is clear above all: Only a fool would think that the Republicans will find the courage to stand up to Trump or that the Democrats will show the unity and discipline to turn themselves into a party capable of winning congressional seats nationwide. The fate of American democracy hangs in the balance, likely to be determined by events that have not yet taken place.

Why following conservative Catholic money is more critical than ever