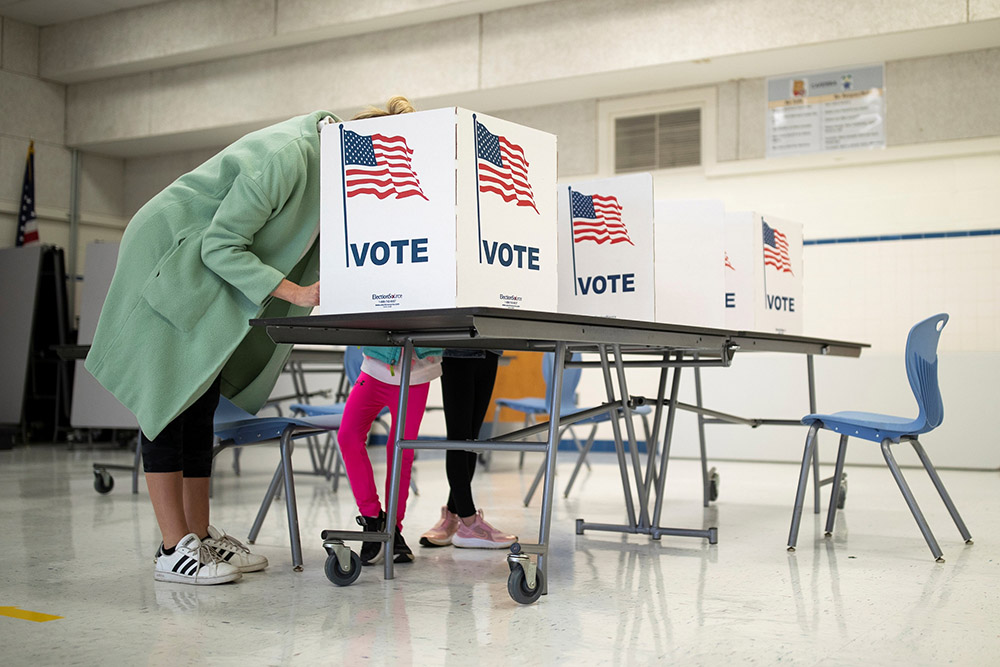 A mother in McLean, Virginia, casts her vote during the governor's race Nov. 2. (CNS/Reuters/Tom Brenner)

Tuesday's election results bode ill for the Democrats as they look toward next year's midterms, when all 435 seats in the House of Representatives and one-third of the Senate will be up for grabs. Both the loss in Virginia and the near-loss in New Jersey should serve as a wake-up call to the party.

There is no denying that when Joe Biden won Virginia by 10 points last year, and New Jersey by 16 points, voters were looking for a return to calm and competence. People's lives had been turned upside down by the COVID-19 pandemic, and whatever else he did or did not represent to people, Donald Trump could never be a vehicle for voters wanting a return to normalcy.

Had the country not faced a resurgence of COVID-19 this summer, and if there were no economic aftershocks of the pandemic, such as increased inflation and decreased supply chain effectiveness, Tuesday might have been a more favorable climate for Democratic candidates. Instead, buyers' remorse set in and both Democratic candidates were flat-footed.

Democratic candidate Terry McAuliffe, and to a lesser degree incumbent Gov. Phil Murphy in New Jersey, thought abortion rights would prove to be a winner for them. It wasn't. Perhaps sensing victory at the Supreme Court soon, pro-life groups were relatively quiet during this election. McAuliffe, on the other hand, ran an ad in the wake of the Texas abortion law that showed opponent Glenn Youngkin saying he would downplay his pro-life stance. It didn't stick.

Education became a bigger issue in Virginia, and specifically the controversy over teaching critical race theory in schools. There was also a hangover effect from school closures due to COVID-19. 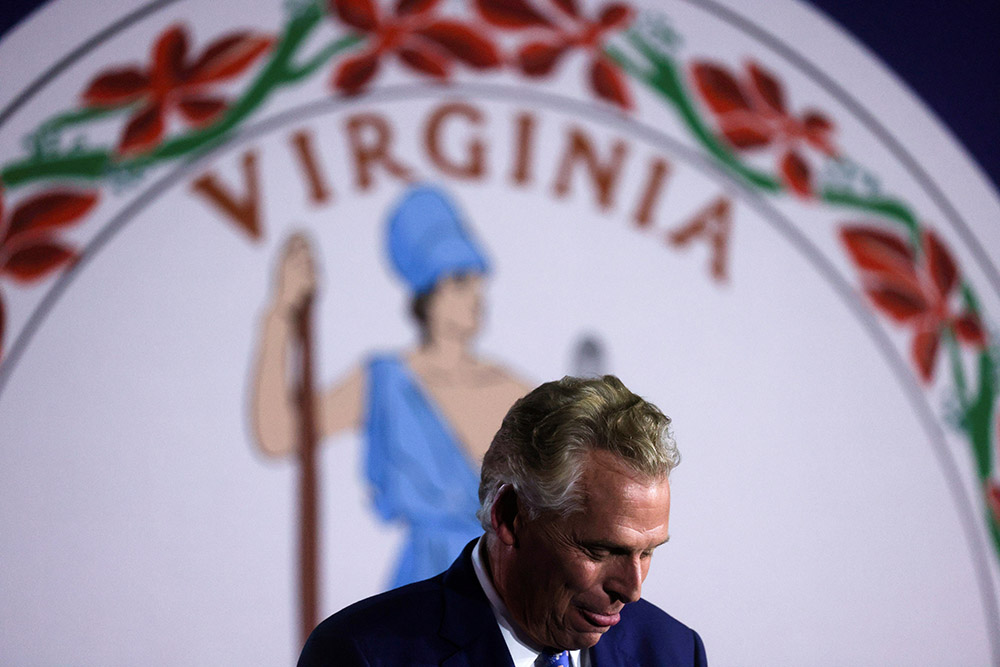 When McAuliffe said in a debate, "I don't think parents should be telling schools what they should teach," he projected the kind of elite, cultural disdain for the hoi polloi that rightly makes voters angry. Why not just call the people "deplorable"? And as I noted Monday, Republicans were only too happy to distort the issue to swing voters their way.

"The topic [of education] encompasses everything from curriculum issues, particularly the flash point of race and racial history and what is being taught in schools, to frustrations over school closures during the worst of the pandemic that cost many students precious months of classroom teaching," noted Dan Balz in The Washington Post. "Democrats haven't found an effective way to debate these issues."

I nominate that last sentence for the "Understatement of the Year" award.

On MSNBC, as the results came in, commentator after commentator insisted that critical race theory is not even being taught in K-12 schools, which is not exactly true. Yes, the original iteration of the theory, which focused on legal analysis, is not taught in local public schools. But The New York Times' "1619 Project," which draws heavily on the themes and methodology of critical race theory, was made available to some Virginia teachers, and other iterations of themes of critical race theory have worked their way into some Virginia school curricula, according to a conservative education expert. Democrats need to find a better way than denial to address this issue.

In New Jersey, it appears that taxes played a large role in the gubernatorial contest. New Jersey residents pay the highest property taxes in the country, with an average bill of $9,112. Murphy raised taxes, and the Trump tax overhaul put a cap on the deductibility of state and local taxes on your federal income tax forms. In a wealthy county like Bergen County, which Biden won handily and Murphy narrowly, that cap hurts.

"If taxes are your issue, Phil Murphy shouldn't be your governor," said Republican candidate Jack Ciatterelli when he announced his candidacy. Murphy never crafted a solid response.

As well as mishandling particular issues, both Democratic candidates also ran lousy campaigns, trying to make the election about Trump when Trump was not on the ballot. Virginia winner Youngkin skillfully managed to deliver a MAGA-message to the base when appearing on Fox News or in the rural Southwest part of the state, while projecting a sunnier, more avuncular demeanor in the rest of the state. He didn't look or sound like Trump.

In an interview with Isaac Chotiner at The New Yorker, RealClearPolitics election analyst Sean Trende said he was not surprised McAuliffe's effort to tie Youngkin to Trump failed:

That's always a tough thing to do, tying people to the out party. I don't know that it ever works that well. Obama tried that in 2010. Remember, he had the shtick about Republicans driving us into a ditch, and now they're just standing there not helping get the car out? And then Republicans picked up sixty-three seats in the House. I just think it's tough, especially since Trump had his Twitter and Facebook suspended and it's tougher for him to make news. I just think that was a losing strategy from the outset.

Trende said he thought the post-pandemic economic challenges had more to do with McAuliffe's loss than did the issue of education, noting that the swing in Loudon County was big — 15 points — but it was not a tsunami. That somewhat misses the point. Republicans do not have to win in Democratic-leaning suburbs, they just need to close the margin.

Cultural issues affected other races too. In Minneapolis, not only did voters reject outright a proposal to overhaul the city's police department by a margin of 56% to 44%, they also awarded incumbent Mayor Jacob Frey of the Democratic-Farmer-Labor Party a second term with 70% of the final vote in the city's ranked voting system. Frey was criticized for not supporting calls to "defund the police" in the wake of last summer's riots after the murder of George Floyd, and Frey's principal opponents both supported the police overhaul amendment that lost. 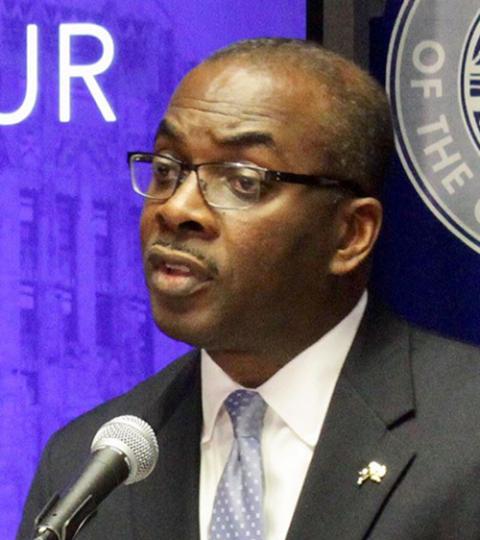 In Buffalo, New York, incumbent Mayor Byron Brown lost in the June Democratic primary to a more progressive challenger, self-described socialist India Walton, but Brown mounted a write-in campaign that netted him 59% of the vote Tuesday to Walton's 41%. Walton originally embraced the "defund the police" mantra, but later said the slogan did not describe her actual proposals.

On Twitter, catchy sloganeering works. Not in politics. In politics, when you are having to explain that your slogan does not mean what it seems to mean, you are losing.

Progressives hailed the victory of Michelle Wu, who will become the first woman mayor of Boston. But Wu was running against another progressive Democratic woman, Annissa Essaibi George, so the result was a foregone conclusion: In a city where Republicans are harder to find than a white elephant, progressives were going to notch a victory. That fact tells Democrats nothing about how they should protect their majorities in the U.S. House and Senate.

Where do Democrats go from here? "The clearest message for Democrats nationally is that the fear of Trump 2.0 is not enough to win elections," Tom Perriello, former head of Catholics in Alliance for the Common Good and a one-term Congressman from Virginia, wrote in The New York Times. "Congressional Democrats, especially those in tough races, should be sprinting to immediately pass the boldest possible version of President Biden's Build Back Better agenda."

That is undoubtedly true. They need to be seen governing competently and in a manner that is consistent with what Biden promised on the campaign trail.

Virginia and New Jersey also reaffirmed two lessons Democrats need to be reminded of every decade or so. In Virginia, they lost in large part because the contest focused too much on cultural issues instead of economic ones. In New Jersey, they almost lost because they forgot that Democrats need to make sure voters walk into the voting booth feeling like workers not taxpayers. 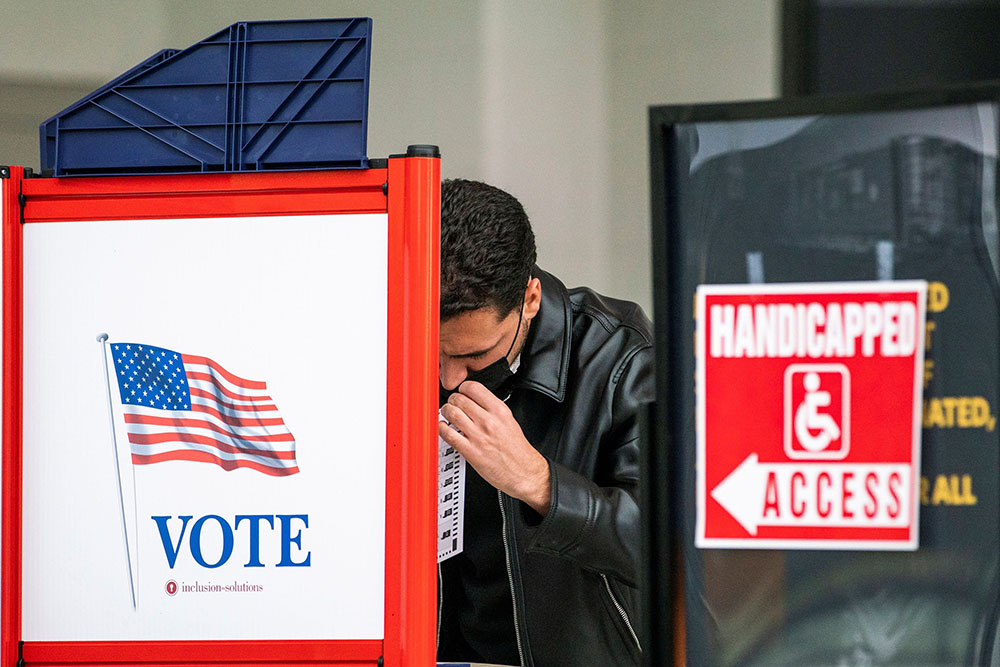 A man in Newark, New Jersey, fills in his ballot in a privacy booth while voting in the gubernatorial election Nov. 2. (CNS/Reuters/Eduardo Munoz)

Passing the two infrastructure bills helps on both fronts: They are about economics and they respond to voters' needs as workers.

Most importantly, the Democratic Party, and especially those who plot the midterm strategy, need to resolve their internal debate between those advocating for a base-driven political strategy and those who insist the party must continue to try and persuade voters in the center of the electorate. That resolution must favor the latter.

"For all those who have written off persuasion and swing voters as a thing of the past: Hate to break it to them, but they're very real," veteran strategist Jesse Ferguson told Politico after Tuesday's shellacking.

Only about 10% of House races are genuinely competitive and those districts are not fertile ground for the variety of progressive politics that might win in Boston and Berkeley but didn't sell in Buffalo and won't sell in Boise. There is no way to avoid the art of persuasion in politics.

Progressives who think getting the base excited is the best strategy may lament the fact that the country is not more attuned to their politics, but they cannot be permitted to risk a return of Trump and Trumpism. They need to learn how to persuade people or they will never learn how to win an election.