3 reasons some Latino Catholics lean toward Trump, and what the church can do 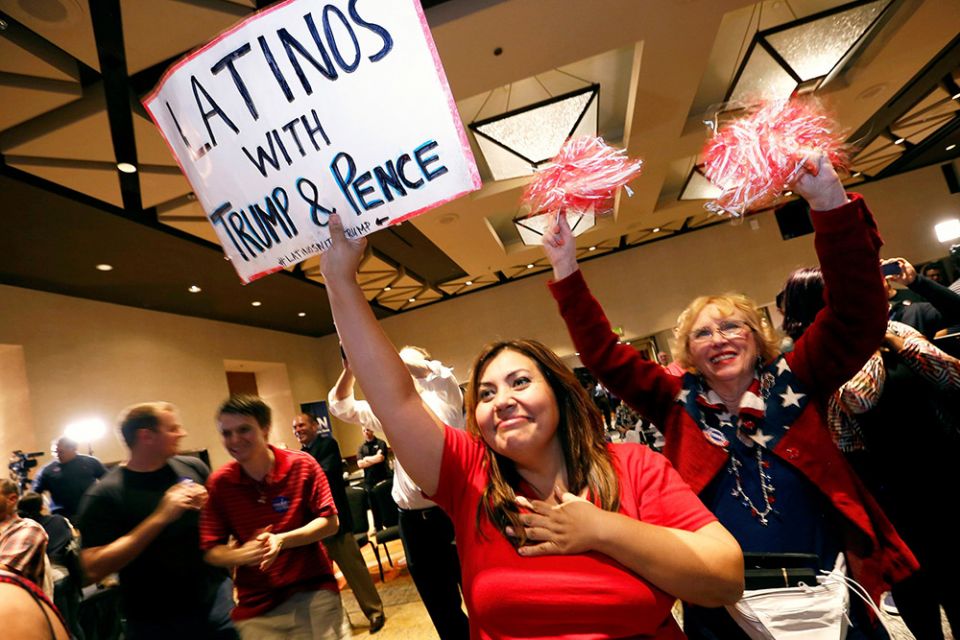 Attendees at a Republican Party event in Phoenix watch as President-elect Donald Trump gives his acceptance speech in New York in the early morning hours of Nov. 9, 2016. (CNS/Reuters/Nancy Wiechec)

Headlines affirming that President Donald Trump's numbers are up with Latinos, especially in Florida and Arizona, left many of us scratching our heads. How can this be? How can a president who ran and is still running on an anti-immigrant platform, and who has insulted Latinos over and over again be faring well among this same group?

I first would like to clarify that whenever the label "Hispanic" or "Latino" is used, the results are bound to be problematic. The word "Hispanic" is often used to label those from a Spanish-speaking background. This means that someone from Spain is as Hispanic as someone from Mexico; yet, as much shared heritage as they may have, the lived experiences of people from these countries could not be more different. It also means that a fourth-generation Hispanic is often bulked in the same group as someone who came to this country recently and who may be directly affected by current immigration policies. Again, the lived experience of these hypothetical persons would be extremely different.

The word "Latino" is narrower as it encompasses only people of Latin American countries. But even then, the lived experiences of Latinos vary widely depending on country of origin and its political environment, age, how many years they've lived in the United States, level of education, and whether the person has a loved one without legal status.

Yet there are a few factors that can help us understand why Trump is faring well in some Latinx circles — without forgetting that an overwhelming majority of Latinos will never be Trump supporters. 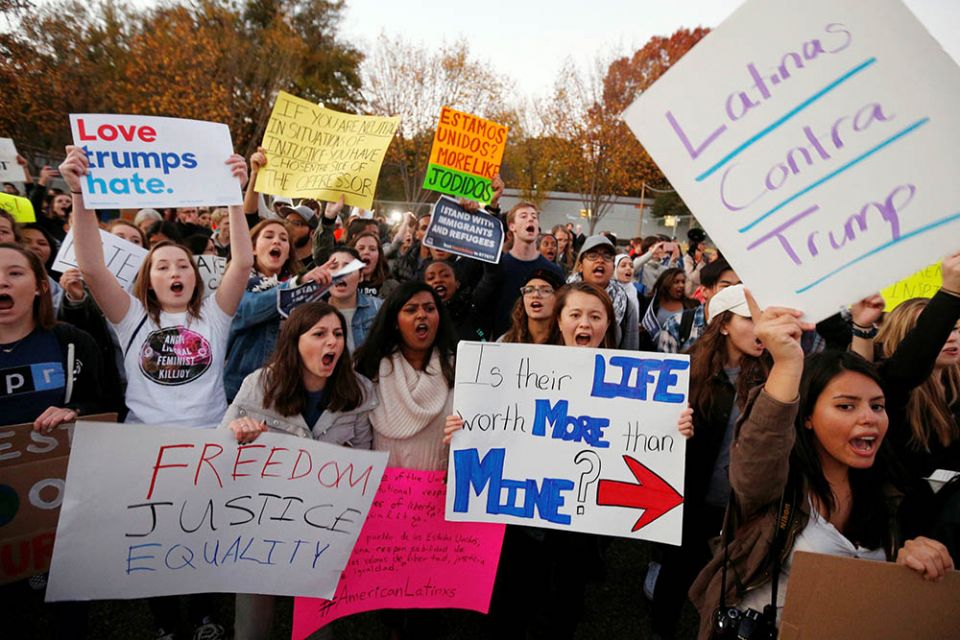 Despite running his campaign on anti-immigrant policies, many Latinos still believe Trump has done no harm to immigrants. The Latino community expected to see large mass-scale raids the moment Trump became president. Yet that did not fully materialize — thanks in part to local sanctuary policies in cities and states across the country that limit cooperation of local law enforcement with U.S. Immigration and Customs Enforcement.

Instead, Trump went the policy route, which is quieter and harder to detect by the lay person.

According to the Migration Policy Institute, "now well into its fourth year, the administration has undertaken more than 400 executive actions on immigration." This includes the separation of families at the border; imposing criminal, rather than civil, charges on those who try to cross the border; attempting to end the Deferred Action for Childhood Arrivals program; targeting the poorest immigrants by increasing fees; doubling the share of non-criminal immigrants arrested by ICE; and targeting humanitarian protections for immigrants. There have also been allegations of migrant women being sterilized without their informed consent at ICE detention facilities.

Despite this, the great majority not only of Latinos but of all Americans, are not aware of the changes that have occurred away from the spotlight and that have deeply affected the lives of human beings made in the image and likeness of God.

Cuban voters, still the most represented at the Florida polls, "are the rare demographic (anywhere in the country) with which Donald Trump has improved since 2016," according to Equis Research. Generally, as Equis reports, there is a lot of uncertainty and swing in the Cuban vote and the reasons are complex; however, lived experience certainly plays a role.

The boogeyman of socialism and the characterization of Democrats as socialists, along with the misinformation that accompanies such characterizations, has effectively made Trump more attractive to Cuban voters who are still dealing with the communal effects of having lived through a failed communist regime.

Another common trend is to see some Trump support among Latinos who quickly legalized their immigration status thanks to past pro-immigrant policies. This may be the case in Arizona. One theory is that these Latinos see new immigrants as competitors in the job market and an obstacle to achieving the American Dream. Despite the fact that they benefited from immigrant-friendly policies, the victim becomes the victimizer; forgetting they were once strangers on this land. This, coupled with religious conservatism — particularly around abortion — makes the perfect case for Trump. 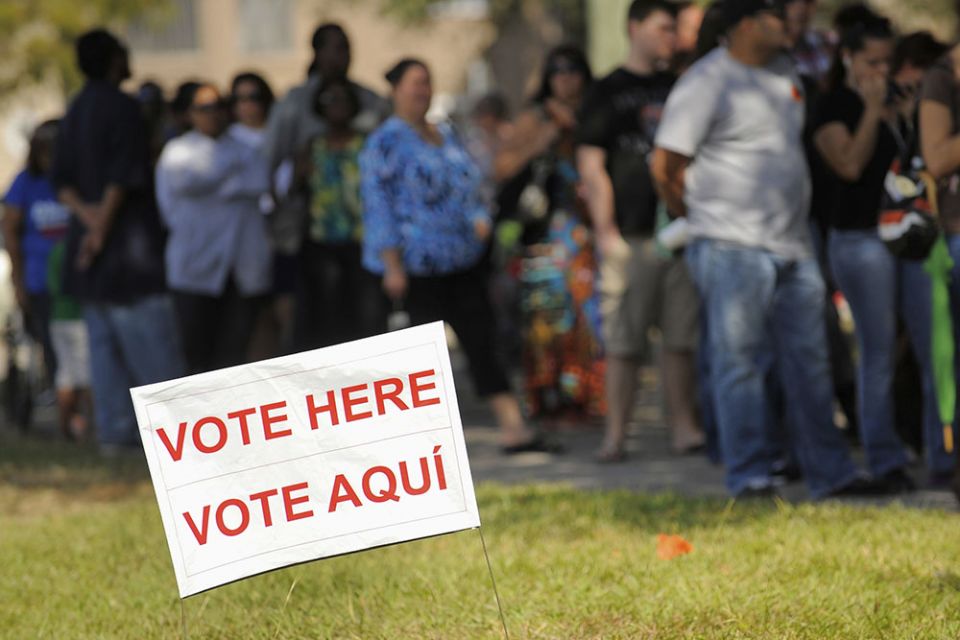 A sign in English and Spanish is seen as people wait to vote in 2012 outside a polling place in Kissimmee, Florida. (CNS/Reuters/Scott A. Miller)

For a long time, religion was an almost unifying factor among Latinos, regardless of country of origin. To be honest, I'm not quite sure anyone would fully understand the extent to which religion has played and still plays a role for Latinos, unless they are Latinos themselves.

At the same time, in Latin America, many past injustices were executed in the name of religion. Younger Latinos are generally more aware of this and have started to drift away from the church in alarming numbers, both in Latin America and in the U.S. Younger Latinos — who know that Catholicism has historically been used to oppress the poor and vulnerable in Latin America, starting with the conquistadores and abuse of indigenous populations, and continuing through more subtle ways— are often rebelling, not against Jesus, but against religious power being unquestionably used for the benefit of the privileged. For this reason, younger Latinos are generally less likely to vote for Trump, even when they perceive the church as supporting Trump.

To clarify, the meaning of "religious authority" has changed overtime and has expanded from "anyone who has a clergy collar" to now include anyone perceived as speaking on behalf of the church, including lay ministers, lay preachers, those in Catholic radio or other media, and anyone who claims to be acting in the name of religion. This is worrying for a few reasons.

As a youth leader and former Catholic radio host, I have met hundreds of "predicadores" or lay preachers, as well as radio hosts and guests, who lacked basic adult religious formation beyond confirmation. It turns out, there is an almost unspoken rule in ministry in Spanish in the United States: as long as someone knows a few Bible verses by memory, knows how to speak in public or "habla bonito," and touches on abortion or culture war issues, that person is considered a religious authority.

Even as part of the Pastoral Juvenil (Young Adult Ministry) team in the Los Angeles Archdiocese, where formation is encouraged, we see virtually no support from parish priests to encourage ministry leaders to attend our adult religious formation programs.

Consequently, Latinos are often misinformed about church teaching regarding voting, and often believe pro-birth and culture-war issues are all that matter to be a good Catholic. Unfortunately, I don't think this is a problem exclusive to Latinos. Adult religious formation across all demographics must be encouraged; otherwise, we have a case of the blind leading the blind.

The church has failed the poor and vulnerable many times in the past. By failing to be more outspoken about the root values of the Gospel, as well as its application in modern-day scenarios, our church leadership is failing the vulnerable again. The church, both the institution and the people, has a moral obligation to very clearly oppose policies that violate human rights and the dignity of vulnerable groups, and to be a unifying voice for all the vulnerable; not just the unborn.

A hyper-focus on pro-birth policies and the culture wars has taken away the church's prophetic zeal in modern times, but it is not too late. The social doctrine of the church is a hidden gem that we should teach about whenever possible, so that Catholics may have a well-formed conscience to discern their vote.

Catholics must have a better moral compass guiding them through their voting decisions, the compass of a well-formed conscience. This can only be accomplished by focusing on the dignity of the human person, on solidarity, on the preferential option for the poor and vulnerable, and on the common good. We are not a single-issue church, and our vote should not be a single-issue vote.

[Yunuen Trujillo is an immigration attorney, a faith-based community organizer and a lay minister. She is the religious formation coordinator (Spanish) with the Catholic Ministry with Lesbian and Gay Persons of the Archdiocese of Los Angeles, and the founder of the Instagram @LGBTCatholics.]

Commentary | 3 reasons some Latino Catholics lean toward Trump, and what the church can do