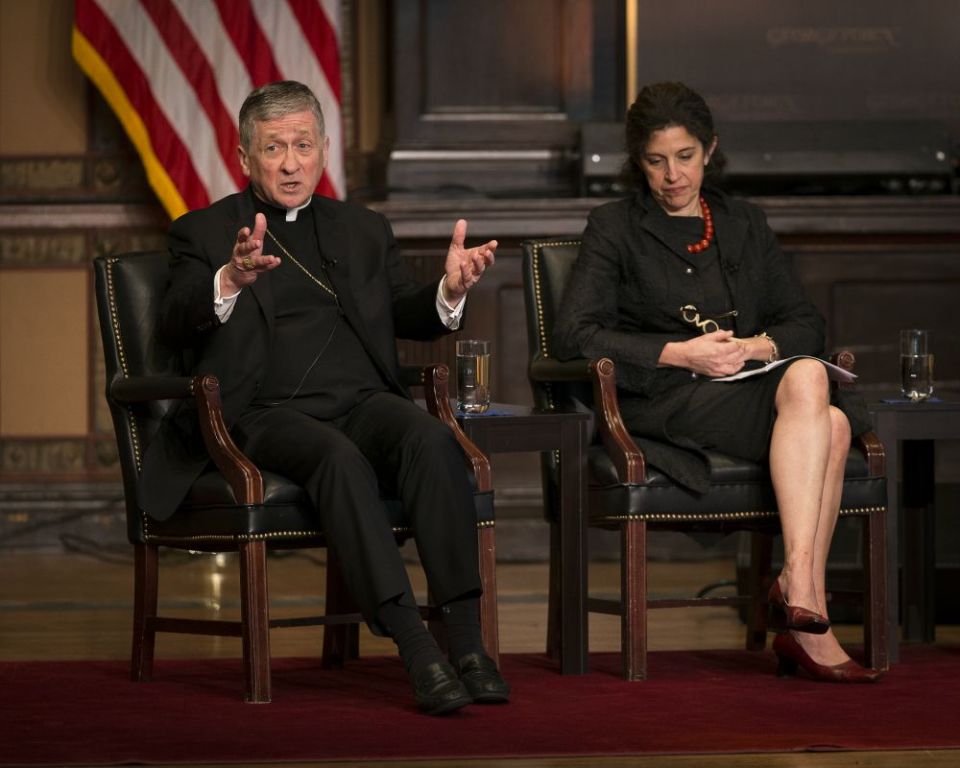 Earlier this week, I was privileged to attend a three-day conference on how Catholic social teaching could help in overcoming polarization in the Catholic Church. The event brought together 80 or so Catholic leaders, clerical and lay, and was convened by John Carr, director of Georgetown University's Initiative on Catholic Social Thought in Public Life, and Kim Daniels, who formerly worked as a communications adviser at the U.S. bishops' conference.

It was the second anti-polarization conference I have attended: The University of Notre Dame sponsored one three years ago that resulted in the book Polarization in the Catholic Church: Naming the Wounds: Beginning to Heal. Both events succeeded more as social, than as intellectual, responses to the fact of polarization: It is harder to really detest someone you just had breakfast with, but the hard work of discerning the sources of polarization remains to be done. Mostly, people pulled their punches; they were on their best behavior, so the root causes of polarization were not really reached. That said, it was good that the conveners invited not just academics but people who work for dioceses, run Catholic social teaching-focused non-profits, labor leaders, and even journalists. The conversations and the networking may be as important ultimately as any theory.

I do not concur with the premise of the conference. Indeed, one panel consisted of three pollsters explaining that while Catholics are virtually unanimous in accepting essential creedal propositions, entertaining a favorable impression of pope Francis, and recognizing the importance of the sacraments and of caring for the poor, when it comes to public policy, most Catholics are partisans first and Catholics second. Sixty-one percent of Catholic Republicans, compared to 65 percent of all Republicans, think the poor have it easy on account of government benefits, while 70 percent of Catholic Democrats think abortion should be legal in all or most cases. Maybe Catholic social teaching is not the cure for polarization, but the source?

As well, E.J. Dionne pointed out that anti-polarization is not an absolute value. He noted that the 1850s were a polarizing time in our nation's history, and that the people who were most vocal in fretting about polarization were willing to defend the institution of slavery to keep everyone calm.

Meghan Clark, a professor of theology at St. John's University, New York City, pointed out that Catholic social teaching itself insists that the starting point, as an ethical matter, for discussion about itself is always listening at the margins, by being with the poor, not with trying to analyze a left vs. right divide. Clark went on to note that if you are looking for truth in the Catholic intellectual tradition, you are looking for a person, not a proposition, that Jesus is the way, the truth and the life, that Catholic social teaching is always about the stance of wonder before the Incarnation before it is about right versus wrong. More on this last point presently.

The conference began with three prelates — Cardinals Donald Wuerl and Blase Cupich, along with Archbishop José Gómez. Wuerl recalled Pope Paul VI, in Evangelii Nuntiandi, saying, "Modern man listens more willingly to witness than to teachers, and if he does listen to teachers, it is because they are witnesses." Cupich spoke about how people are separated one from another, not just partisan ideas, and also invited the group to retrieve the American tradition of civil argument, invoking John Courtney Murray.

Gómez recounted some of the horrific statistics of poverty today and asked: "Where do we start in the face of such human misery?" He quoted Pope Francis: "We are experiencing a moment of the annihilation of man as the image of God," and added, "And everywhere in our society, we can see what they are talking about. We can see it in the way people in our economy are more and more treated as objects that can be replaced or tools to be used to further the ambitions of others." The three bishops all head to Ft. Lauderdale next week for the spring meeting of the bishops' conference, and perhaps they should deliver their talks there as well because the conference is as polarized as the people in the pews.

In one of the small group discussions (which were held under Chatham House Rule, and so I cannot attribute this brilliant comment), a young woman was speaking about integral human ecology and Francis' encyclical Laudato Si'. And she said she thought the pope was calling for a stance of solidarity marked by wonder before all of creation, just as St. Francis exhibited. This echoed to my mind Clark's point about the priority of the Incarnation before ethics.

The other clear highlight was listening to Missionary of Jesus Sr. Norma Pimentel talk about her work helping immigrants along the U.S. border with Mexico. Several of her stories recounted people who either opposed her work or had a legal obligation to monitor it, and how bringing them into contact with the people and their needs softened their hearts and they were converted to a more humane stance or a more humane implementation of the law. One local official showed up when she first started her work and, seeing the chaos, demanded to know what was going on. Sister Norma replied, "We are restoring human dignity." He asked how he could help, and when told they needed showers, procured eight portable showers by that very night.

Perhaps, listening to Clark, Pimentel and the young woman at the ecology discussion, the chief lesson from this conference is that then-Cardinal Bergoglio was right when he told the cardinals who would soon elect him that the church had become self-referential and, just so, sick and misdirected. Mutatis mutandi — perhaps the way to overcome polarization is not to discuss it over fancy canapés at Georgetown University but to get to the margins and be with the poor, and to encounter Christ there.

That said, there remains a point of confusion that must be addressed. In the public session, Professor Helen Alvaré, law professor at George Mason University, said that she always thought the dichotomy between "social justice Catholics" and "pro-life Catholics" was a false one, because all of her pro-life friends work at soup kitchens or undertake similar work on behalf of the poor. God bless them. But, Catholic social teaching, while it commends opportunities for charity of the kind Alvaré described, also demands more. It demands justice. It demands that we look at, say, the economy through the lens of Catholic moral teaching and reach moral and anthropological conclusions based on our teaching rather than merely swallowing the dominant Hayekian ideology about markets that is so popular on the right and can be found in the classrooms of the Catholic University of America's business school.

Many people at the summit complained that our civil discourse has become coarse and that we should work to make it more civil, starting with ourselves. One small group I attended analyzed the way the media, and especially social media, can make this more or less difficult. But this is a misdiagnosis. The nastiest campaign in American history remains that of 1800 between two men, Thomas Jefferson and John Adams, whom we have long since placed in our national Pantheon, awarded the solemn title of "Founding Father," erected great monuments to, and written countless volumes about. The problem is not a lack of civility. That said, having Professor Cathleen Kaveny of Boston College Law School discuss the relationship of rhetoric to moral argument, as she did in her brilliant book Prophecy Without Contempt, should be the centerpiece of the next anti-polarization conference.

No, the problem today is that for the past 50 years, the Republican Party has decided to kill their own brand by saying government is itself the problem. Pepsi never really attacks Coke, and Ford never directly attacks Chevy because doing so would harm the brands they share: soda or cars. But no one can suggest there is any equivalence in the willingness of the two parties to put the ambition for power before any principled commitment to democracy. As one colleague said over coffee, "Anyone who thinks both sides are equally at fault should be asked how Merrick Garland enjoys being on the Supreme Court." And that was before 95 percent of congressional Republicans became collaborators with Donald Trump.

I am not criticizing the conference for failing to bash conservatives and Republicans. Nor am I criticizing the conference because it avoided the kind of historical analysis that might yield insights to the actual roots of polarization. But, although the organizers repeatedly said the goal was not to sing "Kumbaya" and paper over differences, the one or two times the tension in the room came to the surface, we all moved on. True, a discussion of the abortion vote in Ireland, for example, might have become a rabbit hole, but if polarization happens in rabbit holes, that is where those who wish to heal it must go.

Of course, this criticism also reflects the bias of one who writes an opinion column for a living. As Amy Uelmen, visiting professor at Georgetown Law, noted in one plenary, we don't want journalists or lawyers focusing on overcoming polarizations the way we do want pastors or lay ecclesial ministers to do. Rounding up a diverse group of Catholic movers and shakers, drawn from different points on the ideological spectrum, and providing them the opportunity to get to know each other over the course of three days, perhaps that is sufficient reason to convoke such an assembly. Perhaps that is the only way to overcome polarization.