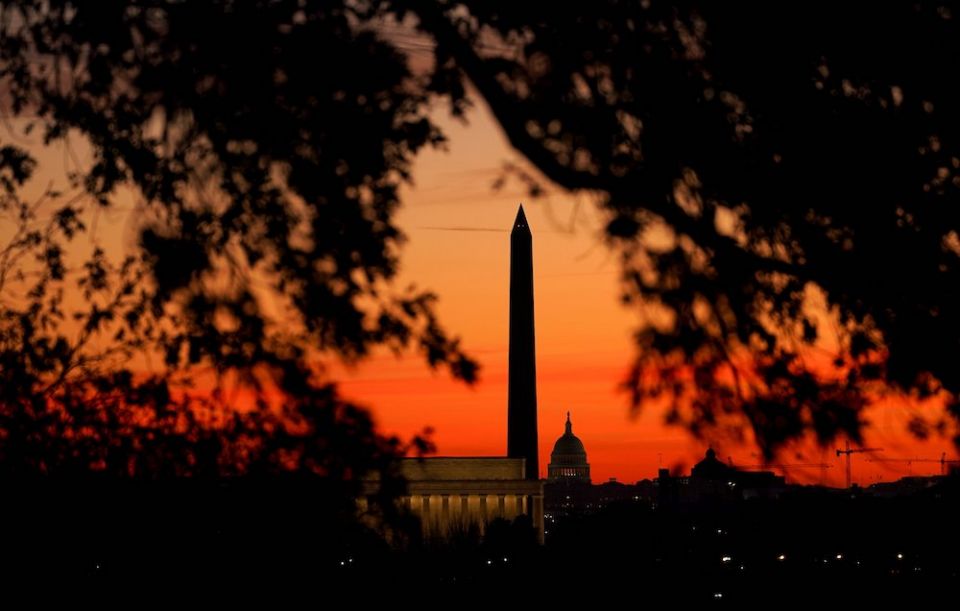 The sun rises behind the U.S. Capitol, the Washington Monument and the Lincoln Memorial in Washington Nov. 19. (CNS/Reuters/Kevin Lamarque)

Consistency may not save the Republic, but it helps us distinguish morally serious people from their counterfeit: David French, at his own blog "French Press," takes on Republican criticism of Democratic Senate candidate, the Rev. Raphael Warnock, for a sermon he gave on the Gospel passage about serving two masters. French observes: "Apparently, the dogma lives loudly within Pastor Warnock." Touché. And, remember that the dig cuts both ways!

As the liturgical year comes to an end, here is an article that invites us to look past spiritual bromides and confront the radicalness of the claims at the heart of the Christian creed: Ellen Koneck, at Yale Divinity's "Reflections" blog, writes on the problems with "Throw-pillow theology." Not for the faint of heart, but, to paraphrase her argument, Christianity is not for the faint of heart. We need this kind of bracing commentary every once in a while, as surely as we need to recognize that the people who utter spiritual bromides in times of loss mean well and should not be judged too harshly.

At America, Kevin Clarke reminds us that some policies cannot be switched back on like a light switch once Trump is gone. He hollowed out refugee resettlement programs that had taken decades to build up and fine tune. Rebuilding them will not be easy. Sunday's Gospel, from the 25th chapter of Matthew, reminded us of the moral necessity of welcoming the stranger, a moral necessity Trump not only ignored, but ignored simply because he wanted to look tough. In Trump's moral universe, being cruel is a good way to look tough.

E.J. Dionne, in The Washington Post, rightly slams GOP leaders for their failure to defend our democracy. Not just democratic norms, for which they showed little concern the past four years, but now they fail to defend the singularly essential fact of a democracy, the vote itself. Dionne is right to point out what this portends for governance in the next two years. Why would anyone think Biden can make common cause with the Republicans on any issue when they are not willing to stand up to Trump?

In The New York Times, an excellent essay by Jay Caspian King. Like many of us, he is trying to figure out why certain ethnic populations tilted right in the 2020 election. Among the many money quotes, this may be the most important:

I have little doubt that in the future Democrats will try their best to address these swings, both on the local and national levels. But as long as they believe Latinos, the second-largest voting demographic in this election, and Asian-Americans, the fastest-growing group in the country, will continue to vote down the Democratic Party line because they care deeply about racism and bigotry as defined by the left, they will continue to misdiagnose the complexities within these populations, neither of which primarily think of themselves as "Latino" or "Asian-American" at all.

King's analysis points to the need to reexamine many of the assumptions that have governed political campaigns and the reporting on them.

Relatedly, at Politico, Jack Herrera argues that Trump did not win the Latino vote at all but he did win the Tejano vote. Herrera explains the difference. The good news about the polls being untrustworthy — again! — is that we all have to find different ways to analyze what happened rather than just relying on the cross tabs. And, as a bonus, politicians who want to win the Hispanic vote need to actually get to know what motivates those voters rather than relying on assumptions and stereotypes.

Also in a related vein, at The Washington Post, Paul Kane examines the vote totals in Chester County, Pennsylvania, one of the suburban counties that was critical to Joe Biden's ability to flip the state. Once a Republican stronghold, Chester County was won by Biden by 17 percentage points, or 54,000 votes, but down-ballots Democrats did not do as well. As Kane shows, the divide is as much about culture as it is about partisanship. If, as I argued yesterday, an embrace of Burkean ideas would make the GOP more humane and more genuinely conservative, the Democrats need to make sure they do not become the party of Whole Foods shoppers, which would represent a capitulation to the ideology of meritocracy that would be completely repugnant.