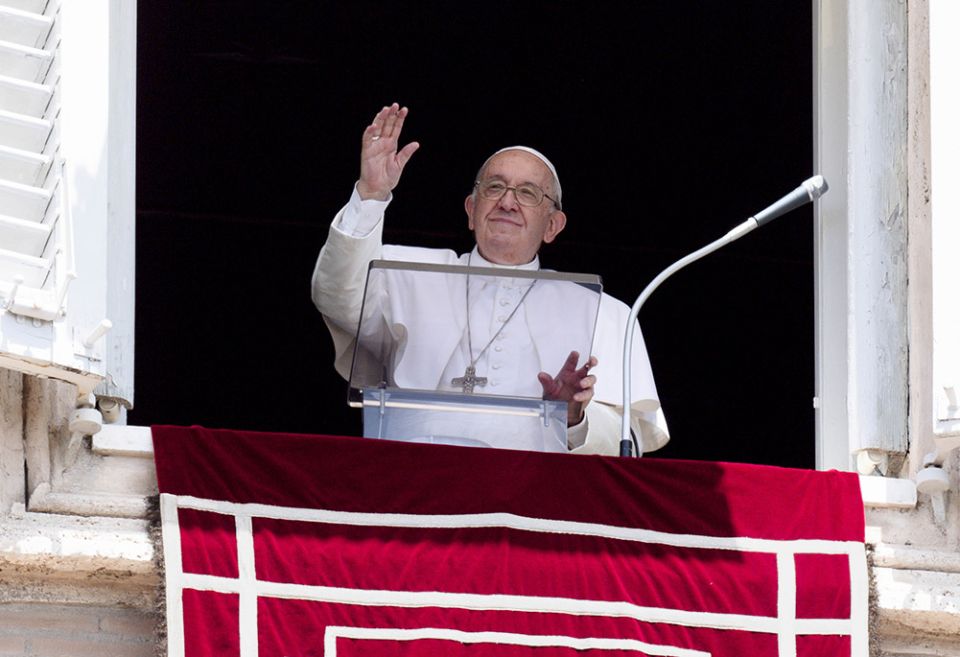 Pope Francis greets the crowd as he leads the Angelus from the window of his studio overlooking St. Peter's Square at the Vatican June 26. (CNS/Vatican Media)

Call to mind some historical figures who were in power for more than a few years, and you might notice a trend: Over time, they get a little predictable. Policy decisions begin to tend toward the moderate, initial attempts at innovation morph into efforts at consolidation, and surprises disappear, replaced by schedules that have been carefully vetted for all contingencies.

One thing you can certainly say about Pope Francis: In the 10th year of his papacy, he certainly still knows how to surprise.

One big example of that came earlier this year, when the pontiff released his plan for the dramatic overhaul of the Vatican's sprawling bureaucracy. Thanks to a new apostolic constitution, a host of once impossible things are now possible. For one, women can now lead Vatican offices.

Another example came in May. Despite there being no urgent need to name new cardinals — there are currently 116 cardinal electors across the world, and the usual limit is 120 — Francis announced he would be creating 21 new cardinals, including 16 electors, this August.

What's more, one of the pope's choices would send what NCR columnist Michael Sean Winters called "an unmistakable sign" to the U.S. church. San Diego Bishop Robert McElroy — who has called for a more welcoming approach to LGBTQ persons and for the prioritizing of environmental concerns and has told NCR he is in favor of returning to the practice of ordaining women as deacons — will now soon be a cardinal.

For those more used to American cardinals hobnobbing with the conservative Napa Institute set, or pining for a return to the Latin Mass, things certainly have changed.

Other examples of Francis' surprises may not be so dramatic, but they are surely quite symbolic. Take the Vatican's daily rundown of the pope's official meetings for June 20. "This morning, the Holy Father Francis received in audience Fr. Richard Rohr," it said.

The photos of the encounter paint a lovely scene: Rohr, a Franciscan and globally respected spiritual writer long held at arms' length by church hierarchs for his interreligious and dialogical approach, meeting the very leader of the global church. Rohr, nearly 80, was in his brown habit, carrying a cane; Francis, 85, was in his wheelchair. Both were smiling widely.

In 2013, Rohr wrote a piece for NCR reflecting on Francis' first major interview as pope.

"He has forever changed the Catholic conversation," the priest said at the time. "We can never go completely backward."

We certainly hope so. May the pope of surprises keep surprising.

A version of this story appeared in the July 8-21, 2022 print issue under the headline: Here's hoping Francis, the pope of surprises, keeps surprising us .

Cardinal Tagle says everyone has a little migrant in their soul