Editorial: There's no national emergency except for US injustices 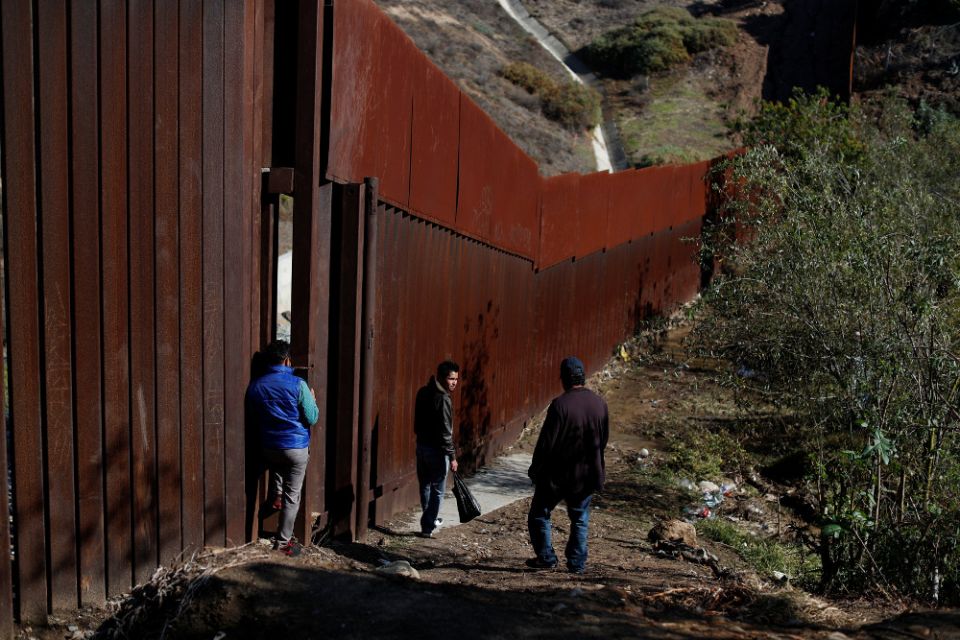 Migrants, part of a caravan of thousands from Central America, trying to reach the United States, walk next to the border wall Dec. 8, 2018, as they try to cross into the U.S from Tijuana, Mexico. (CNS/Reuters/Carlos Garcia Rawlins)

The narrative constructed by President Donald Trump about our southern border is crude and incorrect, elaborate in its ignorance and enticing to those who need the comfort of someone other to fear and to blame for life's difficulties.

There is no national emergency on this side of the border, except that caused by caging children and separating families.

There is no emergency on this side of the border except in the ongoing illusion that the parents and children seeking asylum are terrorists and drug dealers.

The real emergency on this side of the border is our refusal to square up with the truth of the displacement of thousands so desperate to survive and to seek a better life for their families they are willing to risk the dangers of the long trek from Central America.

"It is imperative that we focus on human rights violations as a cause and not just a consequence of migration," writes Msgr. Arturo Bañuelas in his reflection "To honor Jakelin and Felipe, we must have justice at the border," in memory of two Guatemalan children who died while in U.S. detention.

Bañuelas, a theologian, pastor of St. Mark's Parish in the Diocese of El Paso, Texas, and chair of the Hope Border Institute, understands a dramatically different narrative, grounded in reality, one that begins to peel away the layers of falsehood and leads inevitably to a deeper look into the actual causes of the migration.

He traveled to Guatemala recently with a delegation from the Hope Border Institute to meet with the families of Jakelin and Felipe, promising that their deaths had inspired him to greater work for human rights of refugees, "especially the vulnerable young."

While there he also "encountered the conditions that drive people" to seek survival elsewhere. "I saw firsthand," he writes, "the impacts of climate change, of the palm oil industry on indigenous land rights, and of the lingering trauma of Central American conflicts."

That last one is of special importance, because Guatemala owns the distinction of having suffered one of the most extreme cases in this hemisphere of U.S. interference. It's long period of trauma extended from the overthrow of a duly elected government in the mid-1950s to years of interference by U.S. security apparatus in league with that country's generals and oligarchy to training in the U.S. of its armed forces, which committed ongoing and unspeakable atrocities against civilians, particularly the indigenous population. Today, it is a place easily exploited for its bountiful riches, such as lumber and minerals.

Can we face the fact that some of the worst of the exploitation occurred during the term of President Ronald Reagan — so often depicted as that sunny extension of American optimism — who found a way around U.S. law restricting military aid to that country and befriended as a champion Guatemalan Gen. Efraín Ríos Montt, one of the bloodiest in a string of brutal dictator generals? Ríos Montt was convicted in 2013 of conducting a genocide against his country's indigenous people.

The real tragedy on this side of the border is that the administration, locked into its fantasy of danger at the border, has remained silent about the current Guatemalan government's plan to pass a bill that, as The New York Times reports, would "grant amnesty for war crimes committed during the country's brutal 36-year civil war." Guatemala's trauma has a long trail and profoundly disturbing effects.

In this time of turmoil in the church, witnesses like Bañuelas demonstrate its strength: advocating for the poor, those oppressed and without hope, while understanding the signs of the times. It is a supreme irony, of course, that we possess here what people so longingly seek while having so much to do with making conditions impossible elsewhere.

We join Bañuelas in his closing plea: "No more deaths. More justice."

This story appeared in the March 22-April 4, 2019 print issue under the headline: There's no national emergency except for US injustices .

Editorial | Editorial: There's no national emergency except for US injustices

US-created crisis is now a humanitarian disaster at Mexico's doorstep

Amid poverty and uncertainty, migrant couples are tying the knot