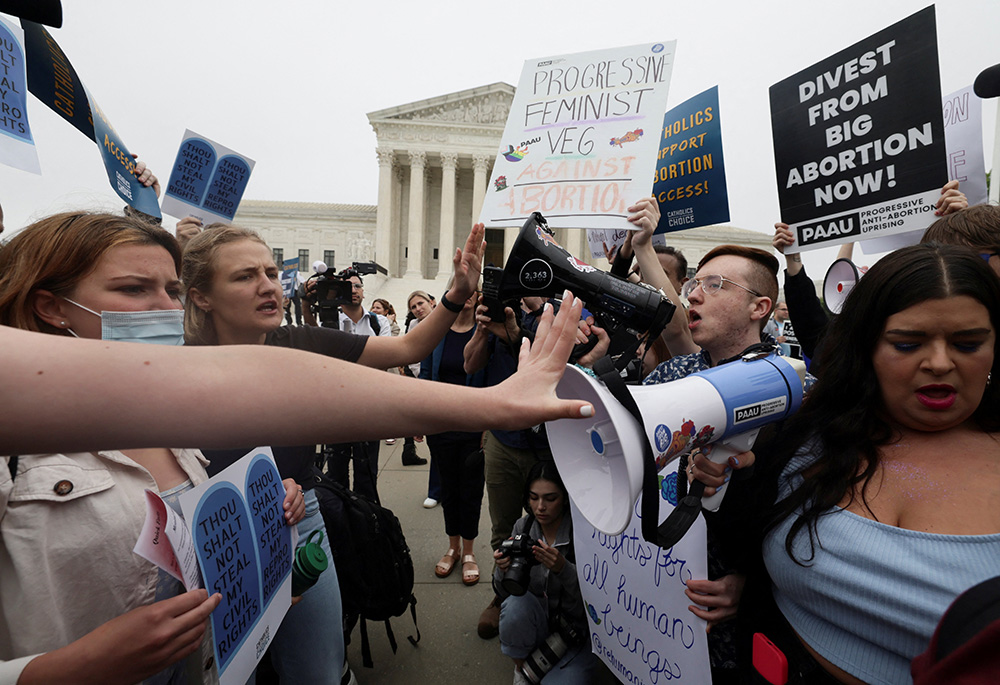 Abortion demonstrators in Washington are seen May 3 outside the U.S. Supreme Court, after the leak of a draft majority opinion written by Justice Samuel Alito preparing for a majority of the court to overturn the landmark Roe v. Wade abortion rights decision later this year. (CNS/Reuters/Evelyn Hockstein)

Last week's leak of a draft Supreme Court opinion overturning the 1973 Roe v. Wade decision (and its companion, the 1992 Casey v. Planned Parenthood case) set off a firestorm of activism and culture war frenzy on both sides of the issue. If anything is clear, it is that there is no longer any center capable of holding, no compromise akin to what prevails in most European countries. America is going to be divided over the abortion issue as badly as it has been for the past 50 years — or worse.

Republican-controlled legislatures in South Carolina and Indiana started making plans to hold special sessions at which they plan to pass legislation restricting access to abortion. In anticipation of Roe being overturned, Gov. Kevin Stitt of Oklahoma signed into law a ban on all abortions except in medical emergencies. In Idaho, Lt. Gov. Janice McGeachin is urging that state to adopt a law banning abortion, with no exception in cases of rape or incest.

Even Catholic bishops in Connecticut have agreed in the past to let Catholic hospital personnel give Plan B medication if a woman has been raped, provided there has been a standard pregnancy test administered beforehand.

Meanwhile, Democrats in the U.S. Senate failed to pass legislation that would have moved to the opposite extreme, eliminating most state-enacted restrictions on abortion, including provisions that require parental notification. Those few of us who self-identify as pro-life Democrats were chagrined to learn that Sen. Robert Casey, son of the pro-life Pennsylvania governor who was the plaintiff in the 1992 case, backed the proposal.

In blue states, what few restrictions existed on the procedure are being tossed overboard. Connecticut codified Roe thirty years ago, but last week, Gov. Ned Lamont signed a new law strengthening access to abortion and including provisions to protect nonresidents who come to the state to procure an abortion. California Gov. Gavin Newsom announced plans to increase funding for abortion access and got into a public disagreement with U.S. House Speaker Nancy Pelosi when he charged Democrats were not doing enough.

President Joe Biden did not help matters when he suggested that other rights hung in the balance. "And it would mean that every other decision relating to the notion of privacy is thrown into question," Biden told reporters before boarding Air Force One. "I realize this goes back a long way, but one of the debates I had with Robert Bork was whether — whether Griswold vs. Connecticut should stand as law."

It is true the "right to privacy" grounded both Roe and Griswold, the 1965 decision that protected the right of married couples to buy and use contraceptives, but it is also true that the late Justice Ruth Bader Ginsburg criticized Roe because it relied on the right to privacy, instead of the Equal Protection Clause in the 14th Amendment. Ginsburg also thought Roe was too sweeping and that it short-circuited a political process that was playing out.

In The New York Times, Adam Liptak fretted that gay marriage might be next on the conservative majority's hit list. But the court relied on the 14th Amendment Equal Protection Clause in its Obergefell v. Hodges decision legalizing gay marriage.

In the 13 states currently with divided government, there seems to be no evidence of anyone reaching for a European-style compromise on abortion legislation. Most European countries permit abortion generally up to 15 weeks of pregnancy. Some countries, like France and the Netherlands, allow an abortion later in the pregnancy and others, like Poland, have effective bans except in cases or rape, incest or the life of the mother.

The U.S. bishops proved once again they cannot resist taking the culture war bait. When the draft was first leaked, Baltimore Archbishop William Lori issued a fine statement that pointed to the need for the church to redouble its efforts to help women facing crisis pregnancies.

"As Catholics, we care about every unborn child and every mother. Our Church has consistently witnessed in word and deed that life begins at the moment of conception," Lori said. "As the bishops shared in our statement Standing with Moms in Need: we pledge 'to redouble our efforts to accompany women and couples who are facing unexpected or difficult pregnancies, and during the early years of parenthood, offering them loving and compassionate care through initiatives such as Walking with Moms in Need and countless others.' "

Yet, after the extreme pro-abortion bill failed in the Senate, that is to say when there was no danger of it being passed, Lori couldn't help but issue another statement, this time with Cardinal Timothy Dolan, who chairs the Committee for Religious Liberty.

"The 'Women's Health Protection Act' (S. 4132) is an utterly unjust and extreme measure that would impose abortion on demand nationwide at any stage of pregnancy through federal statute," the prelates said. "We are relieved that the Senate vote to advance this bill failed for the second time in less than three months. This bill insists that elective abortion, including late-term elective abortion, is a 'human right' and 'women's health care' — something that should be promoted, funded, and celebrated. S. 4132 is far more extreme than Roe v. Wade." 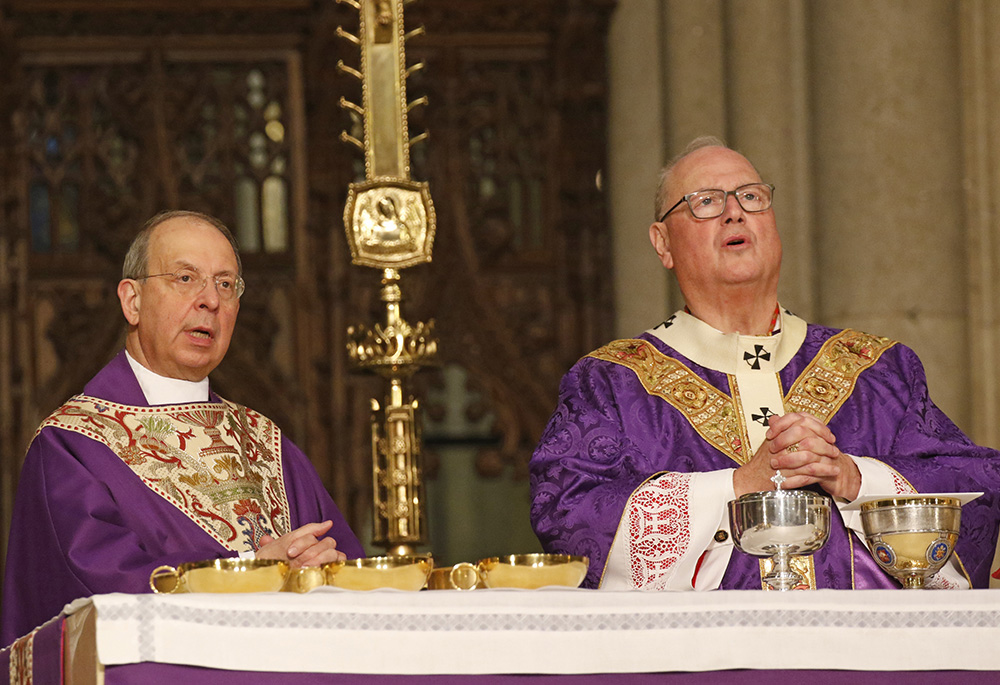 One of the few people urging some measure of moderation is pro-life Democratic candidate for Congress Chris Butler, a Black pastor in Chicago who is seeking the seat held by retiring Congressman Bobby Rush.

"Americans have been unhappy for a long time with the polarizing rhetoric that has pervaded our discourse on this topic, which has served only the political elites capitalizing on it — not the everyday Americans facing real decisions about pregnancy, family, and relationships," Butler rightly said in a May 4 press release. "Normal people are not locked into the easy binaries of modern political activism. They know that there is life inside the womb AND that there is more to life than being born."

Alas, there appears to be no political oxygen for such common sense as Pastor Butler expresses. And, the U.S. bishops need to pay attention. In the past 10 days since the draft leaked, women friends of mine, both pro-life and pro-choice, are furious. They are tired of Republicans refusing to support the kind of policies that would make abortion less likely. They are tired of bishops for a lot of reasons, but specifically for aligning the church with a political party that may be pro-life on abortion but is anti-life on so much else. These women think that the bishops' desire to control women is as much at issue here as the desire to protect human life and dignity. The pro-life movement and the bishops who have joined it need to find better answers to their concerns than vague promises of help with crisis pregnancies.

The pro-choice movement also needs to shed its penchant for cheap and misleading slogans. After two years of Democrats rightly urging all to "follow the science," now they are afraid to call a baby a baby simply because it has not yet been born.

According to the most recent Pew survey only 27% of Americans gravitate towards the extreme positions on either side. Thirty-six percent think abortion should be legal in most cases but allow for some restrictions and another 27 % think it should be illegal in most cases with some exceptions. The culture war framing of the issue keeps the majority desire for a compromise from being brought to bear on the political outcome.

The issue of abortion requires moral discernment, but I am afraid our highly polarized society can only provide moral dudgeon.