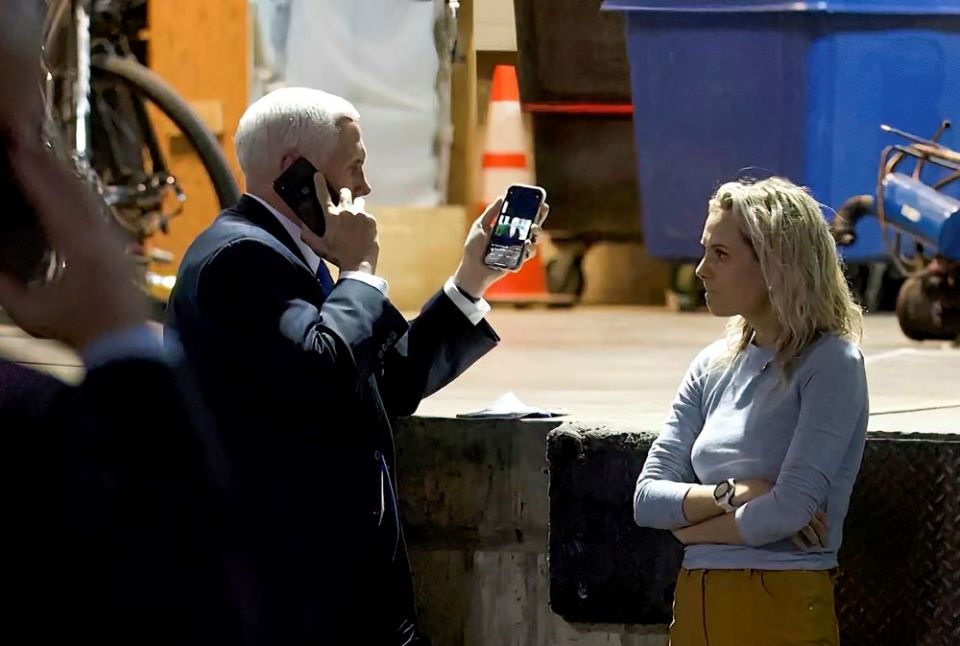 In this image from video released by the House Select Committee, Vice President Mike Pence looks at a tweet by President Donald Trump from his secure evacuation location on Jan. 6, 2021. The image was displayed as the committee investigating the Jan. 6 attack on the U.S. Capitol held a hearing June 16. (AP/House Select Committee)

The hearings being conducted by the U.S. House Select Committee on the Jan. 6, 2021, attack are really morality plays, in which the public and private morals of the key participants in the putsch attempt, and those who tried to stop them, are on display. Through the indelibility of communications technology, the public records act and the subpoena power of Congress, we know a lot about what went down.

The central fact revealed in the June 16 hearing was that many, many people told former President Donald Trump that his proposal to have Vice President Mike Pence unilaterally refuse to receive the slate of electors from certain states was illegal. And, not just illegal but unconstitutional. And not just unconstitutional in any particular, but the kind of thing opposed to the entire fabric of our democracy. If the idea that one person gets to decide who becomes president is not anathema to American democracy, nothing is.

Trump, and his attorney John Eastman, displayed a complete disregard for this fact. They knew they were perpetrating a lie. The president who became a champion of evangelical voters was simply unconcerned about bearing false witness. And, while no government dedicated to human freedom would make lying a crime, except when it obstructs justice or defrauds someone, this lie did both. It aimed to obstruct the just and peaceful transition of power and to defraud the American electorate of their right to choose their president.

The lie did something else. It made the introduction of violence acceptable. The most chilling testimony last week came from Trump's White House attorney Eric Herschmann, who related a conversation with Eastman. Here is the CNN report:

"I said, 'Are you out of your effing mind?'" Herschmann said. "That was pretty blunt. I said, 'You're completely crazy.' I said, 'You're going to turn around and tell 78-plus million people in this country that your theory is this is how you're going to invalidate their votes. Because you think the election was stolen?'"

Herschmann said he told Eastman: "They're not going to tolerate that. You're going to cause riots in the streets."

And he said words to the effect of, 'There's been violence in the history of our country in order to protect the democracy, or to protect the republic,'" Herschmann said.

That was when it hit me. The most disturbing moral failure here was the lawlessness. Trump and Eastman did not want to make America great again. They wanted to make America Somalia again! Locke's enigmatic phrase from the Second Treatise on Government rushed into my memory: "Thus in the beginning all the world was America."

If the idea that one person gets to decide who becomes president is not anathema to American democracy, nothing is.

This lawlessness did not drop out of the sky. As Nancy MacLean made clear in her important book Democracy in Chains: The Deep History of the Radical Right's Stealth Plan for America (which I reviewed in two parts here and here), the antipathy to government that characterized the libertarian movement in the last half of the 20th century was rooted in the belief that government action is a kind of violence. If you believe that, combatting it with your own violence — or with the violence of the market — seems plausible. If government regulation in the interest of the common good is really a kind of tyranny, then Sic semper tyrannis! This has been the Republican creed for so long; Trump took it to the nth degree, but he did not create January 6 ex nihilo.

Which brings us to Pence. There is no doubt he acted admirably on January 6. "We are fortunate for Mr. Pence's courage," Rep. Bennie Thompson, chairman of the committee, said at the hearing. "On Jan. 6, our democracy came dangerously close to catastrophe. That courage put him in tremendous danger when Mike Pence made it clear that he wouldn't give in to Donald Trump's scheme."

Pence and Republicans like him, however, are a part of the radical right schemes outlined by MacLean. They may have stopped short of insurrection, but in their willingness to embrace neoliberalism in the market and its disregard for the common good, and fundamentalism in the chapel with its disregard for facticity, the pre-Trump GOP paved the way for the Trumpians to take that disregard to the next level.

How, then, should we treat Pence? Was it too little too late? How to treat all the other former Trump staffers who finally said, "This is a bridge too far; I am getting off this ride" or some variation thereof? We need not go as far as the father of the prodigal and declare "Quick! Bring the best robe and put it on him!" (Luke 15:22). The fatted calf can stay where he is. In the best of our Catholic tradition, we do rejoice when someone converts, even if it is late, and even if they were complicit for a long time in the evil from which they finally turned. Once the danger of insurrection has passed, and it has not yet passed, we can examine the various historical precursors of Trumpism.

We have just finished Eastertide, when, both at Mass and during the Liturgy of the Hours, the Book of Revelation is featured. So many of the warnings in that often fantastic text focus on the fact that at the end of time, all that is secret will be disclosed, down to our innermost thoughts. As the "Battle Hymn of the Republic" has it, "He is sifting out the hearts of men before His judgment seat."

If it were not for the First Amendment, I could imagine Thompson beginning each hearing with one of those passages from Revelation or citing that verse of the hymn. That amendment prevents the government from excessive entanglement with religion but it does not bind those of us who are not government officials. We can apply whatever moral standards to these heinous acts of treason we wish. But we should always, always hold out hope for converts, and be prepared to welcome them after they have confessed their crimes against our democracy.

Opinion | Jan. 6 hearings put the morality of the nation in spotlight