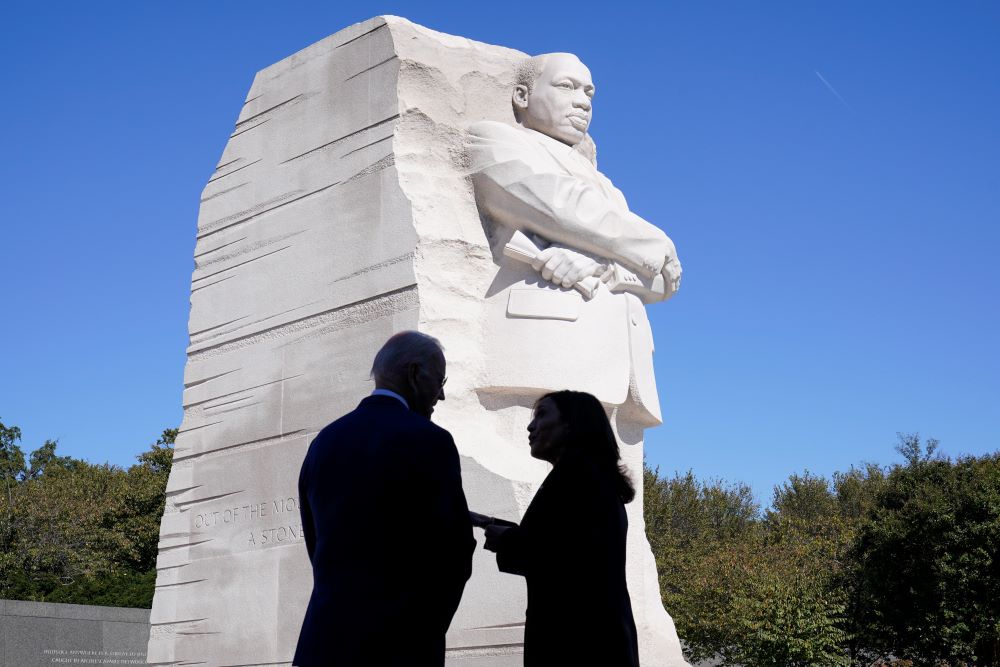 President Joe Biden and Vice President Kamala Harris stand at the Martin Luther King Jr. Memorial as they arrive to attend an event marking the 10th anniversary of the dedication of memorial in Washington Oct. 21. (AP/Susan Walsh)

President Joe Biden’s proclamation for Martin Luther King Jr. Day was fine, commending the great man's vision and urging us to continue the work to which his legacy points. I would go further. As I wrote on the 50th anniversary of his assassination:

It can be fairly said that Providence has sent the United States one American per century who truly rekindles the promise of American democracy, who taps into the moral force of our egalitarian ideals and articulates them in idioms that are necessarily religious but not sectarian. In the 19th century it was Lincoln, and in the 20th it was King.

He was a truly great American and if you have never read Taylor Branch's three-volume biography of King do yourself the favor and read it. I had always admired Dr. King, but I had no idea how truly great a person and how brilliant a leader he was until I read those books.

Speaking of disinformation, see what happens when your preeminent political objective is ending legal abortion as a means of affirming the church's pro-life commitment, and ignore everything else? You get a Supreme Court stacked with ideologues who ignore the threat to life posed by COVID-19 because they would prefer to adhere to their strict ideology. At her Substack "Letters from an American," historian Heather Cox Richardson looks at the Supreme Court's decision to overturn a Biden administration rule requiring vaccination in the workplace.

Relatedly, at SCOTUSBlog, reporter Amy Howe looks at the twin decisions on vaccine mandates. It is important to remember that the court upheld the vaccine mandate for health care workers that came from the Department of Health and Human Services even while it was overturning the mandate issued by the Occupational Safety and Health Administration. I note that again we also see the incompetence of the White House communications team. They should have been celebrating the HHS win as loudly (or more so) than they complained about the OSHA defeat. Pictures of the president with frontline health care workers, with patients, with people in nursing homes, etc. Identify mandates with protecting the vulnerable. Communications 101.

The wizard salary watch continues. The Washington Post reports that Brian Kelly, now the football coach at Louisiana State University, has a contract that guarantees him $9 million per year for 10 years, and with bonuses, he could make over $100 million in the next decade. Meanwhile, almost everyone else in Baton Rouge is struggling. Kelly is no wizard, to be sure, and not only because he could never get his team across the finish line in a national championship game while coaching at the University of Notre Dame. He is not a wizard because there is no such thing as a wizard. Yet, by convincing university administrators that they need a wizard, men like Kelly garner these exorbitant salaries — and so do the administrators who have done the same thing to the boards of trustees.

Also in the Washington Post, columnist Katrina vanden Heuvel tells the story of a progressive Democrat, Chloe Maxmin, who wins elections in rural Maine. The secret? Actually asking voters what is on their minds. Too many Democrats have written off rural voters, which is not a recipe for crafting a working and governing majority, especially in the U.S. Senate, where rural states are overrepresented.