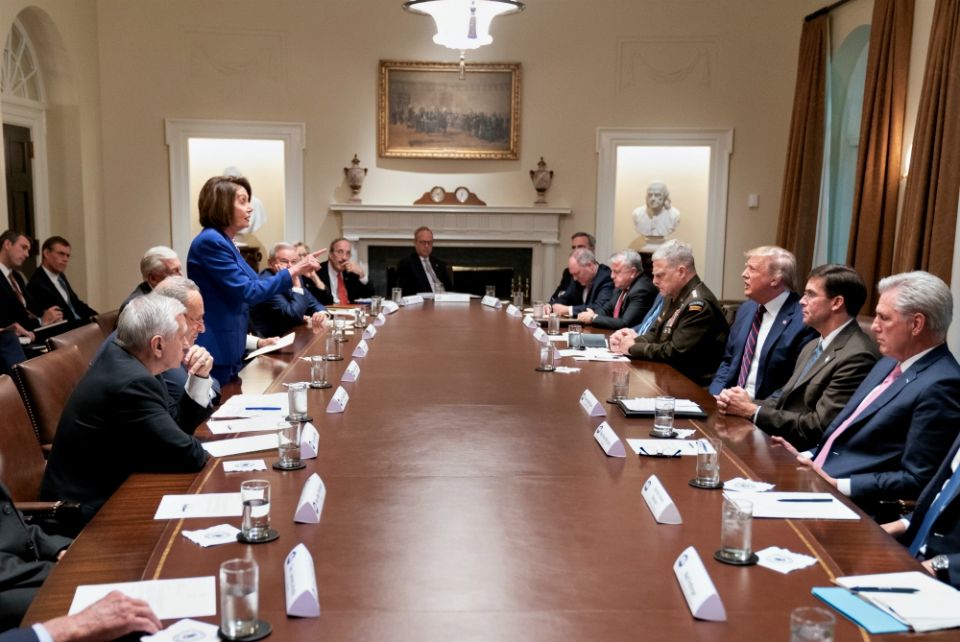 For steady and thoughtful service to the nation at a time of extraordinary challenge and for exemplifying, in all its complexity, a public and, in this case, political role in which her Catholicism acts as a kind of moral bedrock, NCR names Speaker of the House Nancy Pelosi as our Catholic newsmaker of the year.

The life of the nation has been dominated by President Donald Trump for four long years. His dominance has been all the more remarkable because no one, not a Republican nor a Democrat, not a politician nor cultural critic, seemed up to the task of challenging him or exposing him for the morally bankrupt character he is. Until Pelosi became speaker. The photograph of her standing in the White House Cabinet Room, hand outstretched and finger pointed straight at the president while a group of mostly white men sit with heads bowed, became an icon for all of us who have been hoping and praying for someone capable of standing up to Trump.

We now know that the photograph captured a moment when Pelosi was criticizing the president for his hasty decision to withdraw U.S. troops from Syria, effectively abandoning our allies the Kurds, and strengthening the strategic position of — who else? — Russian President Vladimir Putin.

Trump released the photograph saying it showed Pelosi in the midst of an "unhinged meltdown." What we actually see is a public servant who has spent the better part of her life defending the interests and ideals of the American republic confronting this president for his failure to defend those interests and ideals, and doing it in a way that few have attempted.

Trump is not only derelict in the duty of protecting the republic. By denigrating public servants, demeaning diplomats, taking the word of Putin over that of his own intelligence apparatus, attempting to coerce a foreign government into doing opposition research to benefit his political ambitions, and deeming all inquiries into his bizarre and dangerous behavior "a hoax," he actively undermines vital democratic institutions.

We've understood Pelosi's reluctance to pursue the impeachment of the president after the Mueller report when, with some help from Attorney General William Barr's deceitful synopsis, that report failed to galvanize public opinion against the president's demonstrated abuse of power. But, this summer, when a whistleblower showed that the president had not learned his lesson and was intent on garnering foreign interference in the upcoming 2020 election, clear evidence of his contempt not for Democrats but for democracy, Pelosi authorized the beginning of an impeachment inquiry.

Because of her support for abortion rights, some Catholics will be distressed that we characterize Pelosi as exemplifying public service by a devout Roman Catholic. The resilient fact is that since the Roe v. Wade decision in 1973, the issue has been captured, for all practical purposes, by the extremes — roughly 20% for no restrictions, a position unfortunately that has become the rigid orthodoxy of most Democratic Party leaders, and 20% for a total ban, the Republican position.

Consistently since 1975, polling has shown that more than 50% of Americans have an opinion that rests between those extremes.

Advocating a ban on abortion has given cover to politicians who want the "pro-life" label, while ignoring or exacerbating the plight of immigrants, the effects of poverty, the reality of climate change, increasing income disparity and other social issues because they give "preeminence" to abortion.

We may be disappointed that someone of Pelosi's political acumen and status has not taken the opportunity to move the party to the broad middle on abortion. But we also understand the messy limits of politics in an environment where even the nation's Catholic bishops, given 40-plus years of trying, have been unable to persuade public opinion, including among Catholics, any further in their direction.

We also note that Pelosi has resisted efforts by pro-choice groups to make abortion rights a litmus test for Democratic candidates. "I grew up Nancy D'Alesandro, in Baltimore, Maryland; in Little Italy; in a very devout Catholic family; fiercely patriotic; proud of our town and heritage, and staunchly Democratic," she told an interviewer in 2017. "Most of those people — my family, extended family — are not pro-choice. You think I'm kicking them out of the Democratic Party?"

On almost every other issue — climate change, universal health care, anti-poverty efforts, gun control — Pelosi has stood four-square for policies also supported by the nation's bishops. Her enthusiasm for the popes of this era — "I loved Benedict's writing and his speeches," she told an interviewer — is unfeigned. Her frequent and favorable comments about the School Sisters of Notre Dame who taught her as a child point not only to Catholic formation but also to female leadership in her formative years. It is not hard to believe her when she says she prays for the president all the time.

Nor is it difficult to believe her when, asked by a reporter if she "hated" Trump, she responded that she grew up in a Catholic household and was taught to hate no one. "So don't mess with me when it comes to words like that," she said.

This September, Pope Francis, who previously had referred to politics as a noble, if messy, undertaking, said in one of his weekday sermons, "[Politics] may be dirty, just like any profession can be dirty. ... We are the ones who dirty something but it is not so by nature. I believe that we must convert our hearts and pray for politicians of all stripes, all of them!"

Politics in America today is, as we recently editorialized, upside down from a moral perspective. The president pardons war criminals and demeans real patriots who dare to question his attempt to bribe the government of Ukraine. In Donald Trump's America, the rich are not sent away empty. And while all politicians have a somewhat tenuous connection to truth-telling, never in our history have we had a president who lies almost every time he opens his mouth.

Our politics has been captured by the shrill practitioners of ideological purity. On the Republican side of the aisle, that movement has morphed into a cult of personality, membership in which requires, apparently, a blind and absolute obedience. Catholicism lived responsibly in the public square is not expressed in ideological or religious purity. It works, instead, for the greatest common good within the framework of a pluralist and imperfect democratic republic.

The 79-year-old mother of five who learned not to hate in her Catholic household also learned a lot about politics as a youngster. She is the youngest of seven children of Annunciata and Thomas D'Alesandro, who was a Democratic member of Congress when she was born. He later became mayor of Baltimore.

Pelosi graduated from Trinity College in Washington with a degree in political science. She is currently in her 17th term and served as speaker of the House for the first time from 2007 to 2011. She was elected speaker again this year when Democrats took over the majority of the House following midterm elections.

Standing up to the president has placed Pelosi in the brightest of spotlights. But it is also for tirelessly advocating for the poor and migrants, for defending the Constitution and distinguishing between run-of-the-mill political issues and those that warrant impeachment, and for being willing to demonstrate publicly that faith can and should be an inspiring force in society, even when things get messy, that NCR applauds Pelosi as Catholic newsmaker of the year.