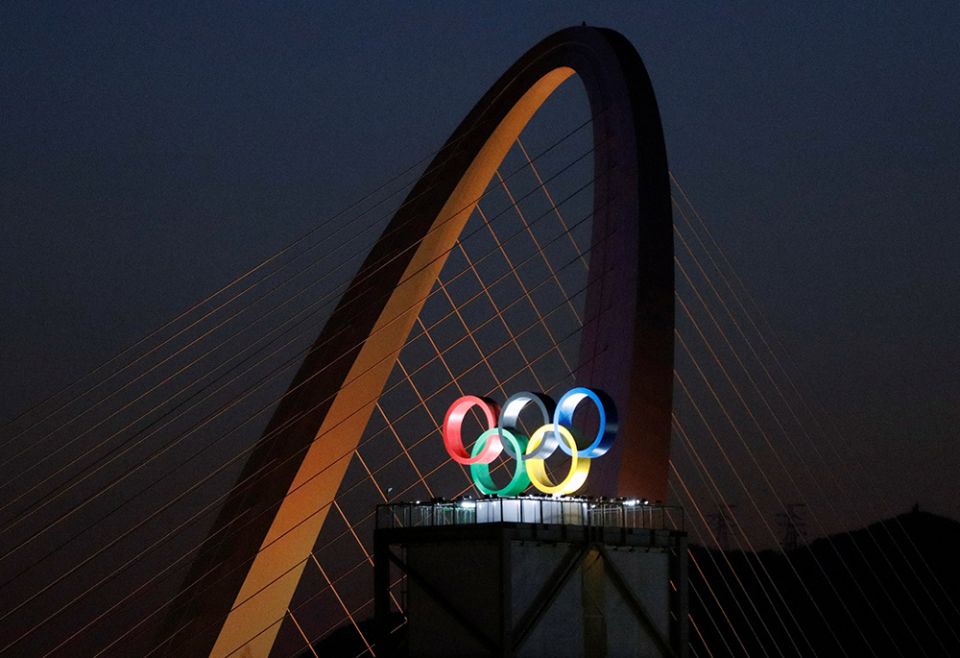 The Olympic rings are seen at the Shougang Park ahead of the Beijing 2022 Winter Olympics Feb. 2. (CNS/Reuters/Florence Lo)

On Sunday, Feb. 20, the 24th Olympic Winter Games closed in Beijing, China. This year's Olympics were unusual for several reasons, including being the first winter games to use artificial snow exclusively, and diplomatic protests in response to China's well-known human rights violations.

However, these Winter Games were particularly distinctive because they took place less than one year after the rescheduled 2020 Olympic Summer Games in Tokyo, Japan, closed in August 2021. The close proximity of the games is not inherently novel. From 1924 when the first modern Olympic Winter Games were held in Chamonix, France, until 1992, the winter and summer games took place in the same calendar year. It was in 1994, when the Olympic Winter Games were held in Lillehammer, Norway, that the contemporary tradition began of alternating seasonal events every two years.

While earlier Olympics have been canceled outright — such as when the 1916 summer and 1940 and 1944 summer and winter games were scrapped due to both World Wars — no previous Olympics had ever been postponed and rescheduled.

The controversial running of the 2020 Tokyo games in 2021 while the global COVID-19 pandemic continued to rage elicited understandable criticism and protest, including from among the people of Japan. In response, the International Olympic Committee, or IOC, and the Japanese host committee imposed tight restrictions on who could attend events, as well as strict protocols for coronavirus testing and isolation. One significant result of hosting a global sporting event in the midst of a once-in-a-century pandemic was the near total absence of spectators on site.

While not as drastic as with the rescheduled Tokyo games, the Beijing games nevertheless imposed restrictions on spectators, allowing only residents of China to attend events. While the minimally attended events this month was a visual — and, one might assume for the athletes, a morale — improvement over last summer’s games, this back-to-back scaling down of the Olympics offers us a glimpse at what the post-pandemic Olympics could be.

Like millions of others, I love the Olympic Games. I appreciate the symbolism that comes with such different peoples, cultures and nations gathering together for several weeks in peaceful if also fierce competition. I appreciate the discipline, training, passion and extraordinary skill these world-class athletes put on display after years and decades of unthinkably difficult preparation. And I am always deeply moved when an American wins a gold medal, stands on the pedestal and hears our shared national anthem played as the flag of the United States is raised in the simple yet iconic ceremony. 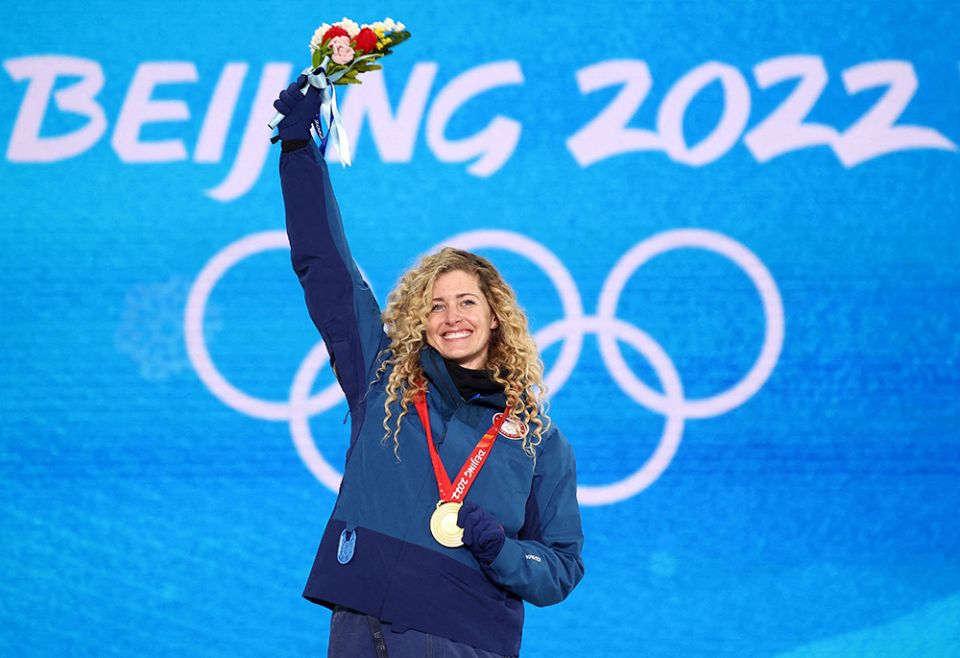 Gold medalist Lindsey Jacobellis of the United States celebrates on the podium after winning the women's snowboardcross at Genting Snow Park in Zhangjiakou, China, Feb. 9, during the Winter Olympics. The 36-year-old won the gold and became the oldest snowboard medalist ever in the process. (CNS/Reuters/Kim Hong-Ji)

But I have never attended an Olympics in person. Nor do I have any real desire to do so. Part of my resistance to the idea of going as a spectator is tied up with my disapproval of how out of control the Olympic Games have become in recent decades. The site selection process is notoriously sketchy with widespread and serious concerns about corruption at the national and international levels. Also, several previous Olympic host cities have since become athletic-venue graveyards, tributes to the excess of national pride that motivated an Olympic bid.

I happened to live in Boston during the rise and fall of that city's attempts to win the 2024 Olympic bid. In the end, the people of Boston would not get behind the U.S. Olympic Committee and the Boston committee's desire to host the Summer Games, so the bid was withdrawn. Los Angeles replaced Boston as the U.S. host city nominee, and it will host the 2028 Olympic Summer Games.

If you add the daily disruptions and inconveniences to the residents over years, the massive transportation and infrastructure overhauls required to support such an undertaking, and the astronomical financial commitment that would be the responsibility of the city of Boston to the cost and potential waste of such temporary venues, you can see why I and the majority of my fellow Bostonians were not thrilled with the prospect of hosting the Olympics in our own backyard.

As someone who was invested in the outcome of the Boston bid, I came to believe that one of the biggest problems with the Olympics today was how ridiculous the ancillary costs and commitments, as well as extra-athletic concerns, had become. Far from a celebration of the majesty of human athletic excellence and peaceful international sportsmanship, the Olympics have snowballed into a global political, commercial and cultural phenomenon that often distracts from the sporting events.

Far from a celebration of the majesty of human athletic excellence and peaceful international sportsmanship, the Olympics have snowballed into a global political, commercial and cultural phenomenon that often distracts from the sporting events.

The Olympics have, as one article in The Atlantic put it last year, "become synonymous with overspending, corruption, and autocratic regimes." Despite some remaining sense that hosting an Olympics is a world-class honor, it has become a financial boondoggle that consistently loses money for the host city and nation. Harder to adequately measure is the human toll that comes with displacement and inevitable environmental consequences that follow hosting the games.

Even though Tokyo and Beijing had already built their stadiums, athlete villages and other venues, the scaled-down events show the world that another way forward is not beyond possibility.

Almost a decade ago political science professor and former Olympian Jules Boykoff published an op-ed in The New York Times titled, "A Bid for a Better Olympics," calling for a serious rethinking of how the games are run, from the host-city bidding process through the games themselves and what happens after the closing ceremonies.

I don't know what the best path forward is, whether it is selecting just a few cites with basic infrastructure and appropriate — if not lavish — venues to host the games on a rotating basis or creating budgetary caps or something else entirely. But I do believe that the Olympics must be scaled back so that greater focus can be put on the athletic events themselves and not on all the sponsorships, the bigger and fancier and costlier temporary venues, the tourism spin, the stadium seating capacities, or anything else that centers the decadence of the modern games and distracts from the primary purpose of this unique global event.

As the "Olympic Charter" makes clear in its opening articles, the stated goal of the Olympics is a celebration of humanity through sports "with a view to promoting a peaceful society concerned with the preservation of human dignity."

It seems to me that what the Games have become today has often displaced the founding aim of the modern Olympics.

What we need is less hoopla and a return to the basics, which means focusing on the sports themselves and cutting back anything extraneous. If that means fewer or no in-person spectators, then so be it. We can watch from home. As long as you have safe and secure venues for the athletes, all you need is any university's Olympic-size pool for swimming or track for athletics or city streets for the marathon.

If we could all start thinking about the games more like Lake Placid and less like Beijing, then perhaps we would experience not just a "Miracle on Ice," but instead a miraculous return to the true spirit of the Olympics.

Opinion | An Olympic lesson from Tokyo and Beijing: Less hoopla and a return to basics